BRAPA - A Washout at the Washington (plus bonus Lytham)

Thursday morning dawned with the inevitable hangover, not helped by the Travelodge breakfast queue snaking back to reception and crawling with twilds.  "Sod that for a game of soldiers", I thought, and went for a meat and potato pie at "Alison's Quid Bakery" - punx gotta eat!  I've had better.

It was a first time in 17 consecutive Punk Festivals of being able to say "I was there" for the first band, and they were Cydernide on the new improved Casbah stage, handing out free scrumpy from boxes under the merch stalls.  Very dry, just how I like it. 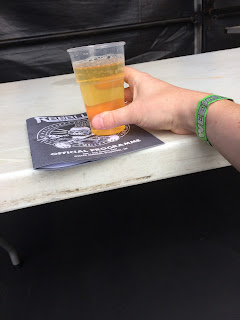 After a few more bands (including a punk George Formby - tagline "Turned out shite again"), I was hungry again and still waiting for my festival buddy Lee "Jigalo" Johnstone to check in and join me.  Perfect time to check out my remaining Blackpool 'tick' right in the heart of town, how had I not been here before? 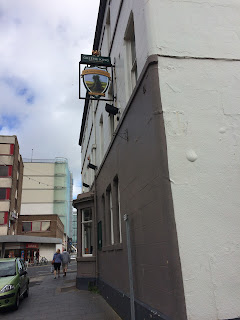 So it was Greene King, that much was obvious, so I was expecting another Gillespies style place and wasn't a million miles wrong, it was just a little bit better but with weirder clientele.  A grumpy man at the bar was being told there was no steak on the menu - he didn't want it, but still reacted like he'd been told his mother had been strangled.  The barman was a friendly acceptable version of Johnny Vegas, and he seemed silently delighted I was ordering ale (everyone else was on lager) though he had no idea what was on what pump!  I sat in a far window beyond two ladies who I couldn't tell whether they were punks or locals, which is Blackpool all over to be honest.  They eventually smiled after I'd photographed the babes.  An excitable old man stared at his mobile phone for an hour.  It eventually rang and he answered it like a man who'd never received a phone call before - almost tears in his eyes.  The Greene King "middle of the road" Best Of Album started puking out of the pub speakers - we had Phil Collins, Glumford & Sons and Snow Patrol in succession so it was time to order a Cherry Stout and a jacket potato (the Macaroni cheese was off like the steak) before I slit my wrists.  A point off for no beermat but I'd brought a festival one I'd picked up with my wristband so all was well that ended well. 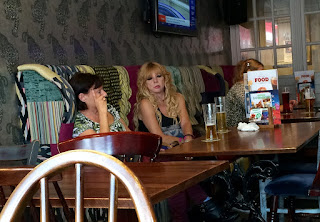 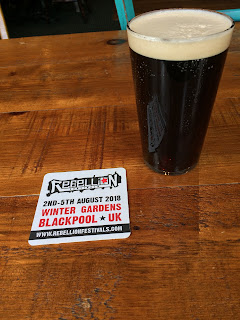 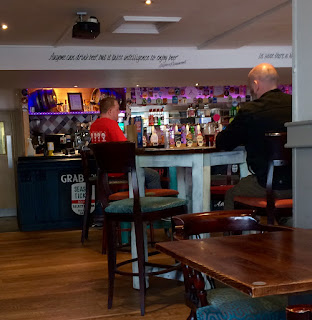 I brought Jig in here twice more over the weekend, once when he was feeling a bit peaky, and on our final day, it was surrounded by L**ds scum (I mean fans) watching their team win at Bolton with their arrogant "champions of Europe" expressions.  It was busy partly due to this, partly due to the incessant rain, so we realised the hugeness of the pub and sat over to the right.  We saw the most heartwarming festival moment ever as a drunk punk passed out in the rain under a newsagents: 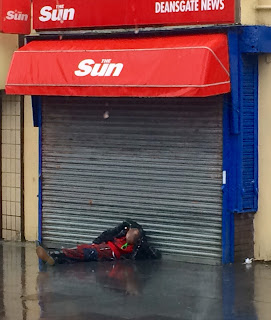 So I laughed and took the photo above (note comedy sunglasses around his neck).  But then, the lovely barmaid who'd served us sampled the Nottingham Pale Ale and approved greatly to prove she was a #PubGirl, ran across the road and rested her umbrella over him to help him stay dry - he was still fast asleep: 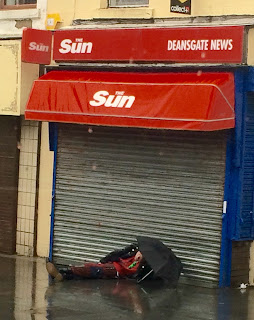 'Twas a lovely moment, and when it blew away from him, a local girl in pink shoes carefully retrieved the brolly.

No wonder we awarded this "2nd best pub" in Blackpool after the amazing Pump & Truncheon, which seems to get better each year at the moment.  Special mentions too for Wetherspoons Layton Rakes and the former 'Spoons Auctioneer - both good pubs.  We didn't get to Rose & Crown or Churchill's this year, the Cricket Club and Saddle were not considered, the Hop was as dreadful as always despite Hull City's good second half display, and Gillespies had been turned into the local MI6...... 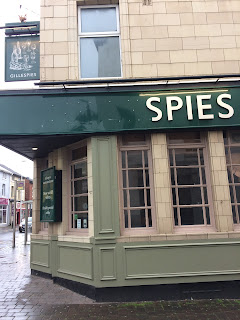 I don't think it can cope with the competition from the rejuvenated Washington if I'm being honest!

Onto Saturday then, we pinpointed this as our "BRAPA" trip having done St Annes last year, Lytham made sense.  Only two to go at, and after a painfully long wait at Blackpool South's busy platform in the nicest sun of the festival, we were soon in the town. 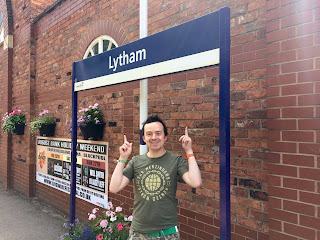 Not sure I thought Lytham was quite as exciting as St Annes, but it seemed nice enough, definitely not Blackpool.  And after this piccie session made it looked like we were fare evading, we bit the bullet and walked to a pub which, surprise, surprise, was a Wetherspoons:

Not near the station particularly, not named after a local person, this was the most confusing 'Spoons ever and the scene didn't get any clearer inside.  It just didn't feel Spoonsie.  Light and airy, and you'd only have known it was a Wetherspoons from the slow service and constant stream of coffee twats ("can i have another refill please?") slowing down valuable drinking time.  We'd settled on an ale only to be told "it's not available yet" which was even more annoying than if it had actually had the "coming soon" sign it should've done.  We sat in the "locals" box room to the right, presided over by a judgey prosecco old lady from a posing table, reminiscent of Jig's dead but still senile Grandma, making occasionally commentaries on what was happening around her.  This included offended a man in green shirt by telling him she used to have a car the same colour, which seemed tame to me, but was enough to ostracise her from the entire male drinking group at the bar.  It was thanks to Jig's observation that we witnessed the best moment.  It all started when a man with twild behind me complained his chicken was cold.  "Oh I'll reheat it!" says the scrawny blonde barmaid.  "No, you bluddy won't, I don't want food poisoning!" says Twaddy running off to find the manager.  Barmaid is apologetic "sorry I'm vegetarian, I'd forgotten you can't just reheat chicken!"  Classic.  After an excruciating wait, Twaddy and Twild go for a piss just a moment the new chicken arrives, so judgey lady tells alarmed looking veggie barmaid.  So it's sat there going cold again!  Twaddy and Twild reappear.  "Daddy?  What if it is cold again?" asks young twild, the question we'd all been asking.  "Well, if it is, they'll get it thrown back in their face!" says Dad angrily (this last quote may be inaccurate but was similar, Jig might know if he's reading this). Sadly, it was fine so we left. 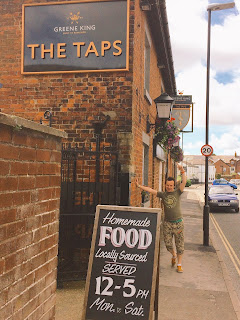 If it hadn't been for the massive sign outside saying "We're a Greene King pub and we are here to lessen the enjoyment of any given pub experience", I suspect you'd never have known as we walked into this mood lit, wood floored, beamed pub offering a huge range of ales like you never see in this part of the world.  "Why are the staff glass cleaning when there's folk waiting to be served?" said one irritable old dude next to us, he had a point.  Problem was, the pub was HEAVING.  It wasn't a small pub by any means, every table packed, bar area packed, outside packed, we just about did enough to find the one table in the shade.  Problem was, a chilly breeze (I had dressed for summer) and being wedged between kitchen and a big store cupboard where large bags of value frozen chips and the like were transported regularly.  I never felt comfy here.  Their apparent insistence on catering for canines was another irritating factor, with their own fake "cask ale", the place was crawling with twoggies and their owners (twoners).  One woman even shrieked "this place is very dog friendly!" like she read my mind.  The locals were reassuringly weird.  An old man with different coloured specs on sticks was obviously pissed as he staggered off, seemed like he was using disability as an excuse to get wrecked.  I've seen that a few times.  No one would dare challenge such behaviour.  Possibly even stranger, a man just stood in the road stock still, for ages, occasionally signalling over the horizon like a general marshalling his troops.  How he never got mowed down was a miracle, his party finally arrived.  A grunge sixth form girl stood and sulkily drank a pint of something cidery and black, popping pimples and listening to Nirvana at the same time (possibly).  This might be a good, perhaps very good pub on a quiet Tuesday night in winter, but I'd have to take someone's word for that. 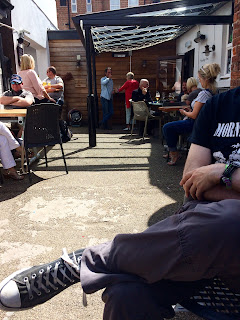 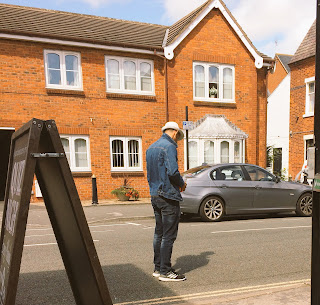 Back in Blackpool, it was time for lunch in Auctioneer.  Then we watched Darlo' legends Gimp Fist.  Then it was off to the horrific Hop for the second half where the Tigers dominated Villa, well until we equalised and then settled for draw!  "We love our slut" is not something you should sing too loudly in this pub.  Landlord said "sorry, the cask is off" for about the 10th year in a row so it was fizzy Ruddles, like drinking battery acid, avoid eye contact with locals, and ignore the fight happening in a toilet cubicle. 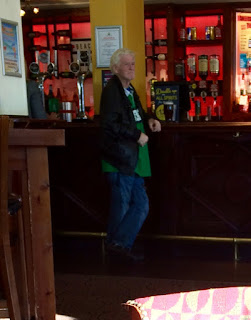 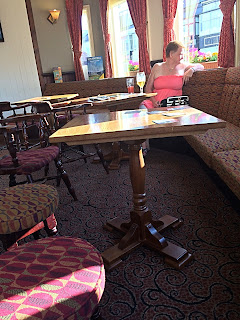 The rest of the festival (especially Sunday in the rain) was fantastic, and I've been recovering ever since.  Lancs moves above Derbys into 11th place in the BRAPA league table on 36 pubs.

I'm raring to go for Saturday's trip to Cheshire, that lucky dip of pub counties.  Gastro hell or heritage bliss, who knows what is next?!   More Warrington Lower Angel, Bunbury Nag's Head and Crewe Borough Arms, and less Chelford Egerton Arms, Thelwell Little Manor and Wilmslow Coach and Four.  You can do it Cheshire, believe!

5 more gets me a hundred ahead of the quarter 1125 mark I want to stay above come the "cross ticking" in early September.