BRAPA - The Dead and the Undead of Fleetwood and Cleveleys

Last Wednesday evening then, and I found myself on the L**ds to Blackpool North train armed with a big jug of ale, given to me by work colleague and waffle eater extraordinaire, Karl Dawson, whose brother owns a new microbrewery called Foggie in Aberchirder (someone near Turriff) and wanted me to be the guinea pig for their new unnamed amber brew.  Fresh from the cask, it needed drinking ASAP, so flanked by a judgey Asian family en route to Blackburn, I managed to swig it off.  No idea on the percentage, "maybe about 5" was the best I got. 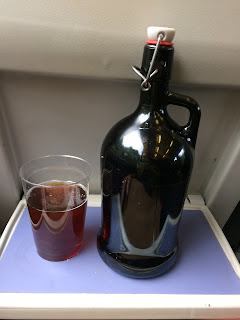 I stumbled into a taxi at Blackpool to take me to the Travelodge opposite the football stadium, where despite my 'casual' work attire I was pleasingly identified as a punk (think the ale was the reason).  "Your mob never cause us any trouble" said the taxi driver and we agreed Blackpool had problems greater than punx.

I was determined not to let the ale affect me, so I had a quick wash n change and hopped on the first tram up to Fleetwood.  On the way, it stopped at this strange world called Cleveleys where mutants with no teeth and blue tracksuits shuffled effortlessly between the local Wetherspoons and the practically stapled-on KFC, so I did my best dead-eyed zombie stare and I joined them ..... 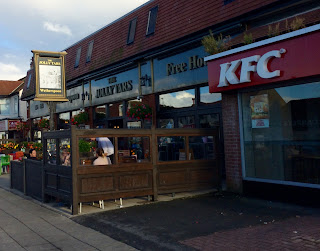 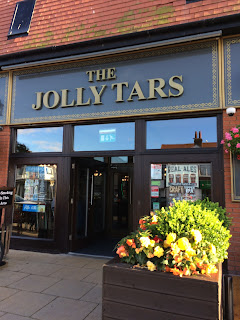 The 'Spoons was doing a roaring teatime trade, one of those where you think "I'll worry about getting served before I even think about where I'm going to sit/perch".  As if I needed reminding of the part of the world I was in, a "supervisor" marched over to the young guy about to serve me to ask if he'd ID'd the blonde girl next to me.  He muttered something about knowing she was over 18, but he was made to double check.  The girl got upset, pointing at a girl who looked about 30 behind her (possibly her Mum) and then said something like "it's ridiculous, I've got 5 kids!" which didn't convince anyone.  I lost them all in the crowds and didn't see what happened next.  What an introduction to Blackpool BRAPA!  I used a 50p off CAMRA voucher, and the pub stopped like that scene in Shaun of the Dead where they realise Pegg n Co aren't zombies after all.  Amazingly, I found a table of 4 to myself and though the undead quickly swooped in for my 3 empty chairs (better than my brains), I was undisturbed to watch sights like "sinister old dude pretending to be a pub bouncer", "girl in wellington boots for no apparent reason stomps around pub". and "bloke who looked like he was eating crumbs from empty tables".  My ale was really good which surprised me in the circs, and combined with the train beer, meant this was a hazy weird experience rather than a confronting one.


I hopped back on the train, unsure whether I should go out to Fleetwood as the clock was ticking and I didn't wanna feel hungover for the festival.   It all depended on fate i.e. which side the tram turned up on first.  To prove the BRAPA gods were smiling, it was heading for Fleetwood ..... 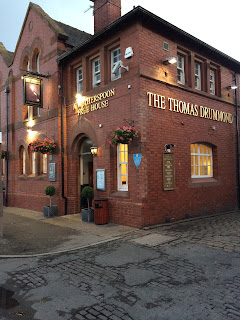 Pub two, Wetherspoons two.  It's like London up here for the volume of 'Spoons making up the GBG entries (I also had ones to do at Lytham and Poulton nearby).  But if the Jolly Tars had been your archetypal 'Spoons, this was a bit less traditional feeling inside, despite the name and exterior.  I entered to a square room lit entirely in deep yellow, with quirky old men looking for someone to chat to lining the bar.  I wanted a session ale under the circs so went for the Hawkshead Pale by Windermere - always reliable I thought, but a sharp intake of breath from two of the locals proved I'd made a mistake.  "Too hoppy by far", so I pretended I was surprised and had never tried it before.  I was conscious all eyes were on me as I went in for my first sip, so I feigned a "wow, that is ultra hoppy" scowl - it is quite, they laughed, but these dudes probably haven't been in a BrewDog or supped a tiny can of Beavertown, though the message was clear, I'd have to struggle on, wishing I'd got a Ruddles or Abbot Ale(!)  I perched on a rare non-posery table to the right, the left was busier, but still found it a cosier environment than the last one.  A sign suggested the pub had been in the GBG for the last 88 years, quite an achievement, but as local lads dissolved into the ether of the Fleetwood night sky, it was quite boring otherwise!


A short walk up the road then, it was dark by now but I was feeling alive again - I was going to a pub that wasn't a Wetherspoons.  And it sounded interesting ..... 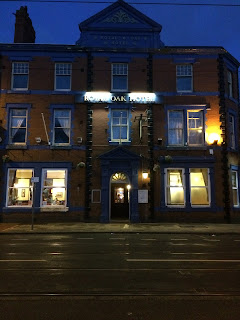 The pub had a reassuringly homely feel, typically Tuesday night 10pm you might say - a couple sat quietly with a sleeping dog at their feet, two students playing pool very badly and laughing at dirty jokes in the back room, and a middle aged woman who can't admit it is time to go home and is trying to engage the pub in one final 'hurrah' for the evening.  I ordered a beer cos it said 'Fleetwood' on it, and the barmaid asked if I was a CAMRA member.  With the recent 'Gosforth Hotel' question fresh in my mind, I asked how she knew?  Did I look like one?  Well, she said it was because 'I seemed like I knew exactly what I wanted'.  Miaow!  Has being a CAMRA member ever been so sexy? And having scanned my CAMRA card, she handed me my change and drink saying "there you go Mr Everitt".  Oh my goodness, you don't get service like this in the Parcel Yard.  I sat down and watched the strange lady assault the poor sleeping dog, the couple were not amused, she then stepped back and said "I like dogs ..... BUT .... I just can't stand the sad eyes!"  After a sustained awkward silence, she eventually took the hint and buggered off.  I got chatting with blue haired lady of the couple - SUCH a nice lady, her husband was pretty much mute by comparison.  It was a bit late for a quiz but they asked me to look around and work out why this pub is known as "the Dead 'Uns".  With much prompting, I realised nearly every section of seating was a shrine to dead regulars, with plaques and photos of old blokes from the past.  It might have been creepy, but it was quite heartwarming, even when I was last customer and I felt a draught and suddenly smelt tobacco.  I'd have to say this is a pub with some real class behind it.

I picked up the next tram (so to speak), they run til after midnight so I didn't have to panic, accidentally got off nearer the Pleasure Beach and had to walk about 5-10 mins, but all in all, glad I got a good BRAPA start.

There'd be more to come mid festival, with a pub in Blackpool still to do, and an anticipated Saturday morning trip to Lytham because that is the day the fewest bands are on I wanted to see.