The weather was like a proper old fashioned beer - dark and mild (and a bit windy), as we gathered in York for the third BRAPA AGM at 8:36pm on Friday 25th August.

The month has been moved from January to August to coincide with the impending doom (I mean 'release') of the new Good Beer Guide, the time that my world is shaken to the core......

Last year, the feedback on the corresponding blog was described as "strange", "pointless" and "didn't really understand it".  It's self indugent house keeping a lot of the below so you have been warned.

It should be pointed out from the start that Twilds and Twogs were banned from the premises.  Last year it was just "women", so I hope I'm becoming a bit more diverse. 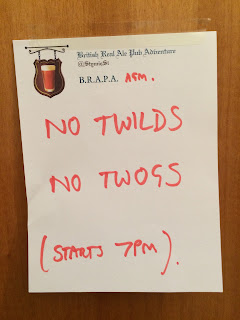 The food on offer consisted solely of mini cheddars and half a box of stale Pringles.  To drink was a choice between Rhubarb Tea, Rhubarb Ale, a couple of colourful cans, and a special Five Towns 9% bruiser donated by the "BRAPA friends from Silkstone Common fund": 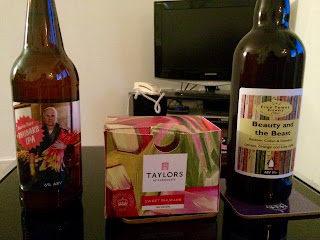 After a brief delay because a baby spider crawled into the fusebox for no discernible reason, it was time to crack on with the various points.

Concentrate, this was the boring science bit.  I explained to many glazed over expressions .....

"The key point to note here, is that any new pubs in the counties which I have completed in full will be treated as 'low priority' (i.e Bedfordshire, Berkshire, and the 4 Yorkshire counties).

In the case of the local Yorkshire ones, this is not to say I'll not try and visit them (a tick is a tick after all), and in the short term, it'll be a relief to have a break from Greater Manchester Tuesday night trips if I can say, pop down the road to something new in Bradford, Saltaire and the like.  Perhaps picking up GMR again in 2018.

But the true Saturday focus is on 'completing' Buckinghamshire & Cheshire.  How long this takes depends on how cruel or kind the 2018 GBG is to me post cross-ticking!  Bucks I only have 6 left currently, Cheshire just over 20.  These numbers will rise in the short term.

By the winter time, I should be able to substitute Bucks for Cambridgeshire, and Cheshire for Cumbria as my two key 2018 counties.  I'm looking forward to Cambs.  Cumbria terrifies me.

There will be another trip to Cornwall in Spring or Summer of 2018 to try and get another 25 or so done - it might be harder this time out.

Other counties will be chipped away at slowly as a result of football matches, NFFD's or random outings like an October holiday in Herefordshire for example.  Tyne & Wear is a county I can see myself completing before 2019 GBG comes around.

By next summer when the football season subsides and Dad is bored and free, I might be able to get some tricky chauffeuring of Durham/North Yorks done again.  Especially if the A1(M) is finally properly functional again!  Middleton in Teesdale is the kind of place I'm thinking about."

(Point Number 2 was scrapped from the minutes after a fight broke out and some old CAMRA members who should know better had to be ejected for being annoying).

It's starting to play on my mind now, nearly 3.5 years into my official challenge, there are still a number of counties which I don't have ONE single tick in.  And that's something I'd like to rectify in the next 12 months.  It is playing on my mind, I find it unacceptable. It's like the need for a sailor to have a girl / fruity male companion in every port, if you think about it.......

Therefore, plans are afoot to visit Warwickshire, Rutland, Isle of Man and one more before the end of August 2018.

It has been brought to my attention that many 'new terms and phrases' have started appearing in the blog over the last twelve months and people occasionally struggle to keep up.  The afore mentioned Twogs and Twilds, 'Twildy' (as an adjective), P.I.S.S. barmaids, SCS and Jizzards are among them, plus more general terms like book work, NFFD's and post-emptives.

I am currently writing a new glossary which will be posted shortly, and will be the 'featured post' on the blog for the next month.

Also attached to the blog, I want to reintroduce the 'On This Day' feature as I've been pub visiting for long enough now to suggest I may have visited a BRAPA pub almost every day of the calendar year.  But this is something I'm looking to test after I've finished cross-ticking the new GBG.  Problem is, it is hard to keep on top of something like this daily, even if you don't have a life!

I listen to a couple of excellent Podcasts (Neighbuzz and some Hull City schamozzle) so thought in the New Year, I might convert my month end review / preview blog into a Podcast - maybe getting the odd guest in - just a 15/20 minute slot, so bring BRAPA into the 21st century.  I can ask for the kit for Christmas and get tips on how to do it properly beforehand.  I'd call it BRAPchat like Snapchat, but with an older target audience who don't think it is hilarious to super impose dog ears and nose on your own face.  The youth of today eh? (Hang on, I'm just reaching for a shiny can of Beavertown something).

A few months back, I spent a fair bit of cash on getting every 'back issue' of the GBG - the only ones I am now missing are 1975 and 1979 so if you see either / don't want the myourself, give me a shout.  I've got a spreadsheet showing the total number of GBG pub I've ever visited, past and present, and though it is a bit of a work in progress, the number currently stands at 1796 which I'll keep working on.

A year or two back, I tried to write an Orwellian style 'Moon Under Water' piece based on my ideal pub, which I named the Green Owl.  I was going to write a special feature called "25 Top BRAPA Grievances" but instead I'm probably going to write a kind of nightmarish vision of a pub which ticks all the boxes of what I hate in pubs and days out.  I could just visit an Ember Inn but where would the fun in that be?

BRAPA doesn't believe in the number 9 as a genuine number so this point was substituted for a quick Hull City score update as they are at home to Bolton as this blog is in progress.  It was surprisingly good news for once.

As we reach the end of August and wait for the GBG to drop through our letterbox with the force of it's 1,000 plus pages, it is time to replenish the stocks.  Two new green highlighters (yes, this colour will be used for a 2nd year, don't gimme pink, pah!), a new Ryman's notepad (the other is in a more sorry state than the GBG), a brisk sharpen of the stanley knife ready for some more 'Brewery Ripping', and most importantly, a new home kit.  Red with a white trim this year, likely to make it's official debut in Buckinghamshire in early September.  There is also a BRAPA hoodie for Autumn/Spring which made it's pub debut in not the most salubrious of settings at Great Yarmouth's Brewers Fayre.  It made up for this with a full BRAPA debut at the Queen's Head Hotel in Congleton recently, it's first act seeing a man play the Jaws theme on acoustic guitar.

"Waaaaah you should go on Instagram and hashtag #pubs #beer #realale etc. and you'll soon get loads of followers of your blog", has been the cry from work colleagues recently, and although I'm on it, what with flippin' Twitter, flippin' Untappd and flippin' linking it to Facebook, do I really have the time?  Can I ditch something to make way?  I know a guy at work with 950 followers, just cos he walks his bike up hills of South Yorkshire cos peddling is tough, and occasionally stops to look at scenery or a stray dog.  Food for thought.

We saved the best til last.  Just like the official protocol for when her Maj dies, we have the same at BRAPA towers.  On the day of GBG 2018 arrival, I will send two brief tweets.  Firstly, expressing my dedication to adhering to the  'publicity ban' until mid September, probably slagging off Londoners in the process.  Secondly, I will include the "lock down" figure" (i.e. where I got up to in 2017 terms).  Those not on Twitter or Facebook will receive a text message with the code words "Mini Cheddar" so that they know serious business is afoot.   I will then draw the blinds in BRAPA towers and retreat from public life for the next two weeks, appearing only to go to work, buy bog roll and go on Saturday BRAPA trips.  There will be no live tweeting, no Tuesday nights and each blog in this period will follow a disclaimer along the lines of "any pub visited today should be treated as merely pre-emptive and if it does end up appearing in the 2018 GBG, this should be viewed as a happy coincidence."  At 6:15am on the 'official' GBG release date, I will send a Blog out detailing my numbers lost (hopefully less than 130), news on any pre-emptives that came good, any funny quirks I noticed, and of course the new overall figure.  I will then blink nervously into the new light of the 2017/18 pub season, all pale and haggard.  It's gonna be emosh, as the kids say, so stay tuned.

And that completed the Annual General Meeting.  Thanks for attending.  Onwards with more from Cheshire tomorrow.