For the first time in almost three months, Tuesday night midweek BRAPA returned as I figured, if I'm going to stay over that magical 1,125 number when the new GBG comes out in late Aug/ early September, I need to give myself every chance (it looks a very tall order).

Sadly, I finished work at 5pm so was on the ridiculously heaving 17:23 to Manchester Victoria via just about everywhere in West Yorkshire and Greater Manchester, but luckily everyone lives in Morley these days so it wasn't packed for long.

An hour and 24 minutes later, I was kicked out at a place called Castleton in the shadow of Rochdale, and I saw the pub looming large just across the road.  Perfectly placed.

Greater Manchester is a real Jekyll and Hyde (no pun intended) place for pub ticking.  You have all those wonderful untouched basic boozers from Holts, Robinsons and JW Lees - not sure Hydes quite have the same appeal, not done many.  And then you have the hipster urbanised outer Manc shitness, places that really make you want to cry into your defunct Credence Cloudwater v.9.33 recurring. 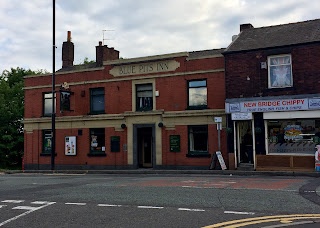 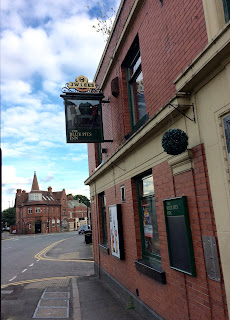 It was obvious before I'd even crossed the road that this was "good GMR", I could practically see the ghost of John Willie waving to me through an upstairs window as some burly men in the chippy next door laughed at me for photographing the pub, but in a good natured way, so they said!  I walked in to a dimly lit, traditional pub, that kind of looked multi-multi-roomed even though it wasn't, such was the trickery of the walls and the light.  A few pubmen looked expectantly at me, and in my best Manc accent (think Kevin and Perry), ordered a JW Lees guest ale so frothy, I was a bit alarmed until the no nonsense barmaid told me the invisible barstaff "hadn't pulled it through properly earlier", a new barrel and a wonderful ale at £2.80.  As I sat on leather benches to the left and got ready to see what I could observe, a bald man called Jonathan brandishing a bag of top quality bread said ow do and sat down next to me.  And stayed there til I left!  He was very quick witted and used long words, too much for me after a tough day at work, but said some great things.  Like "you are looking better on the ale than those hipsters do on the fizzy stuff", recalled meeting beer writer Pete Brown, and said "after Uni, I never dreamt I'd get chance to move back to Rochdale .... thought I'd have to live somewhere like London!"  I bought him a Strongbow Dark Fruits to be polite, and he got onto music history, putting tunes on the jukebox, and making me analyse the lyrics of Abba's Fernando, suicidal pop stars, and told me that while he was in the loo, I should Google "interviews with Brian from The Sweet" but when he returned, his mind had raced on and I never did learn what the significance was!  He then helped me try and work out the best way to one of his fave pubs, the Tandle Hill Tavern (from here or Royton?) - it was all hypothetical anyway as my GBG said closed Tuesday.  If only I knew a man from Tandle who knew Tandle pubs.  Oh well ;)  So that was that, I had stayed for a second pint, but preferred the first.  I said goodbye, and headed back for my delayed train to L**ds, finally getting to York 10pm for sake of one pub.  Tough life this pub ticking lark!

Am determined to keep "wrong side of the Pennines" midweek pubbing going, and plenty more to do on that train line and I get to leave at 4pm next week so perhaps a bit more scope for adventure.

Before that, I've successfully got Oldham moved to Newcastle (so to speak), it's the work gang summer trip so I won't be at my observant or sober best, but I'll tell you all about it anyway as best I can.