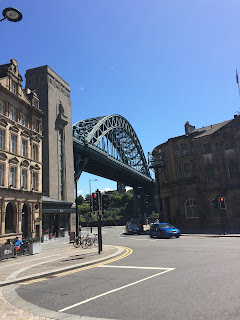 With a seemingly endless supply of quality real ale outlets, Newcastle is a great place for a boozy day out, and under the circs, it is no wonder Ant (PJ from Byker Grove) has had to check himself into rehab.

It was the 4th annual 'work' summer day out, and with Yorkshire now complete, we had to think beyond our comfort zone.  Oldham just didn't appeal enough, and I ended up moving the day to Newcastle, a bit controversial as the L**ds lot had a longer day, and a potentially more expensive ticket than me.

At one point, it looked like we'd get a record number of people of a BRAPA day out, but inevitably, people made their excuses and we left with a nice manageable group of 5.  Joining me were ever presents Rich Ellis and Jason "Angry Arnold" Garrett.  Piper Corday made her 3rd appearance, and Chris Hastings his second, a special mention to him for his sheer enthusiasm considering he's a Sunderland man.

They joined me on the train after breakfast, and before long we were in Newcastle itself.   As my GBG App led us uncertainly to our first pub, I had to put up with the usual "are we there yet?" whinging from Rich and Chris, Jason commenting to me it was like taking kids on holiday.  And there was no Mossley-esque hill climb this year.  It was still before 11am and we stood outside like a bunch of idiots, not realising the pub had secretly opened already ......

Although it didn't look too exciting from the outside, some of my favourite pubs in the North East are Fitzgeralds owned, and they must be one of the better chains out there.   We were surprised to walk into this incredibly well kept, brassy, polished front area, which sloped down to a bar - it was almost gentleman's club, you could imagine Phileas Fogg discussing a wager with Lord Guinness over a game of billiards whilst Bertie Wooster fires breadrolls off a badminton racket into a chandelier.  Piper commented we'd have dressed up if we'd known how posh this place was.  Down at the bar, a great range of quality NE ales to choose from, but considering we were the first customers of the day, the barmaid was uncommunicative and not exactly welcoming.  Would it have been different if I'd been on my own?  Do groups scare staff?  Due to the nice weather, we sat on some tables out the front of the sloping Grey Street (I was worried I was drunk already!), and the gang (three of whom had never been to Newcastle before) were surprised how quiet it was, expecting the place to be full of loud, tanned pissed-up slags and men with vests and whippets, even at 11am, which shows you shouldn't judge a place on what the media tell you!


Rich was already moaning we were drinking too slowly (it was 11:20am) so Chris downed his pint, and we walked just around the corner to our next pub, a mini landmark...... 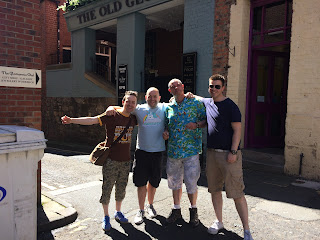 Although it looked like we were walking into a pub, we first had to negotiate a cobbled alley with an old record shop and a gift shop called the 'Glamorous Owl'.  The pub itself was obviously a very old building, and up the stairs we went to a low ceilinged bar area.  If the barmaid in the last pub had seemed a bit unfriendly, they were practically hostile in here - again I suspected they just thought it was a group of pissheads on tour (which of course, BRAPA totally isn't - usually) but jeez, a smile or anything shouldn't be beyond them.  Thought people were friendly in the North East?   I ordered a fitting ale called "Heatwave" and I'd mentioned earlier how it'd be nice to find a courtyard similar to the one at Cricketers in Horbury.   Well, this had exactly it and with no other drinkers still to be seen in Newcastle, we had the place to ourselves.  Just as well, as is the way when Rich Ellis is around, conversation soon turned quite un P.C. and I was soon describing how BRAPA would deal with a terrorist threat which seemed to involve holding a GBG in front of my chest and saying "alroight mate" to my assailant.   It was only just 12 noon, but time for pub three. 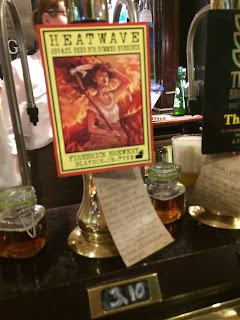 What I reckoned was the longest walk of the day was a lot quicker than I thought, back down Grey Street, past the wonderful Crown Posada, and located in the shadow of Tyne Bridge (or at least a big road bridge that might or might not have been Tyne Bridge, it was all very confusing), was our next pub.   Not to be confused with the Bridge Hotel, or the New Bridge, though does suggest the city has a bit of a bridge fetish.

More good ales, a proper bookcase containing proper books, but perhaps the trendiest pub of the day in terms of food menus, reserved tables, a 'roof' terrace, etc etc.  At least the staff seemed a bit friendlier, and there was a fair few clientele already supping their prosecco and eating their horse burgers or whatever Geordie's do in the 21st century.  Jason tripped down a step, and despite having a reputation for being the angriest man in our office, he took it with decent humour and only semi-threatened to twat everyone in the pub and then burn it down(!)  We found an outdoor area again, this time under the Tyne Bridge and squashed in behind some middle aged hipsters to 4 of those rickety silver chairs which no one's ever got comfortable on.  I spied a separate bar upstairs where the loos were, with a roof terrace, and a young barmaid smiled in a bored way as she realised everyone already had their drinks.  It was a bit of an anti climax, I interpreted roof as "you'll be on the top of Tyne Bridge" but it wasn't the case, and we sat at Mr & Mrs Holstein's table who weren't arriving til 3, and the amount of trendy beards up here was enough to make North London blush.  Luckily, my ale (brewed on site - Tavernale) was my pint of the day or I think I'd have been a bit frustrated by this place.


It was boiling hot by now, too hot to be debating which bridge was which, I was concerned about how I couldn't see the next pub despite being stood at the pushpin on my GBG App.  But then I turned around and it was there, one of those old but non-pubby looking building without a proper inn sign, do I expect too much?

We ambled in to find a dimly lit front bar area leading to an airier modern bar and courtyard, one of those where you have no idea whether they were trying to appeal to the young crowd, or the curmudgeonly older drinker, or everyone, and just fell a tiny bit short on all counts.  The assembled company were complimentary of it I must say, it had a lovely old atmosphere like something that'd been refurbished but they couldn't erase the centuries old history of the building - a faint whiff of pretension hung in the air.  At the bar, our barman looked like he'd just woken up under the bar and started serving, rubbing eyes, yawning, seeming to forget beers, prices etc - the poor lad was suffering but tried his best.  I then struggled with that age old BRAPA problem "where the hell are the loos?" and a wide-eyed European lady oozed out of a gap in the brickwork (possibly, "most helpful foreign BRAPA ghost of the year" 2017) and told me it was through the courtyard, in this other building which seemed to house a brewery and several other rooms, possibly a former stables it felt like to us, as I took the others on a "guided tour" of it later on.  So, all in all, a bit of a confusing place but I can begrudgingly see the appeal.

4 pints in this heat and a walk up those legendary steps from the Quayside back towards the station was quite an effort, I tell ya!  Again, the pushpins on my GBG App were trying to embarrass me in front of my work friends, but the next pub was closer than we thought..... 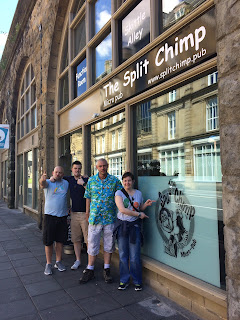 Despite three different people recommending this place to me, I was still a bit skeptical - but it was healthy micropub skepticism, you know the type where you know that due to the 'micro' aspect, it could be a bit limited, especially arriving in a group of 5.  Not a bit of it, this was easily PUB OF THE DAY!  And what made it, from the off, was the first proper good barstaff experience of the day.  Such a good chap.  I'd seen one of my all time fave ales, Titanic Chocolate and Vanilla Stout.  "But dare I have it on such a hot day, 4 pints in?" i debated out loud.  "It depends if you are weak willed!" said the barman, the kind of "pubby bantz" that had been missing all day.  Of course I had to have a pint of it now!  He then told the others the ales come from wooden casks, and if people come in asking for Fosters or Carling, he tells them where to go!  It was heartwarming stuff.  As a group, we all turned to each other and said "pub of the day" as one.  We can't all have been wrong.  We sat on some colourful cinema seats, the loos had some great Viz cartoons, Jason inhaled two pork pies and enthused on their quality.  This is going right up there with my favourite Toon pubs of all time.  I even got a Split Chimp beermat. 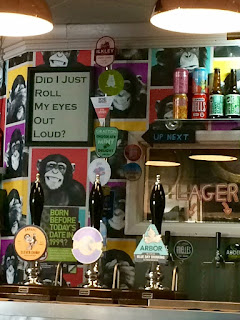 I'd promised the others a "Si Secret Bonus Pub" and I thought it was quite a good clue to tell them it began with a "B" and ended with an "A".  But this just led to everyone thinking Id opened my own Micro pub called The BRAPA.  But of course, if I did, it'd have a zero tolerance on all people so wouldn't do very well business-wise.  I'd maybe allow cats in though.

No, of course you experience blog readers know the pub I'm talking about, the wonderful Bodega which went down well with my 4 BRAPsters, as I knew it would.  Before that, there was time to recreate a former Newcastle Utd fan incident..... 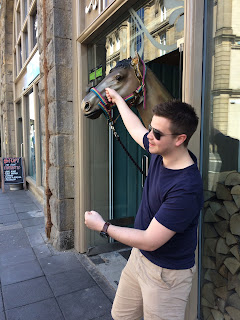 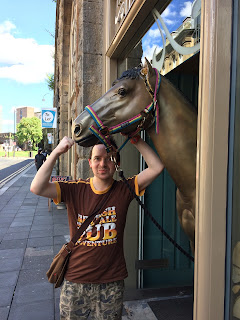 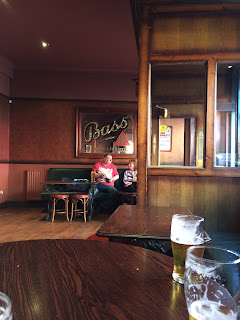 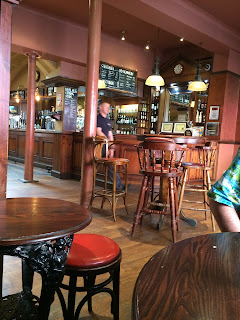 Although I'd had enough beer by now, the hardened drinkers wanted another one (at least) so we popped in the Head of Steam just across from the station ...... 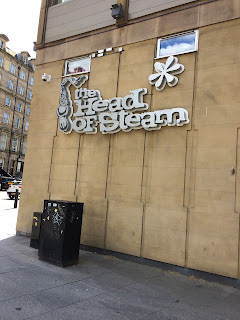 The main point of that experience seemed to be for the yearly ritual of Rich/Jason telling me off for leaving early, but am glad I did!

On the train back, I had to change at Darlo' because my ticket wasn't valid on that train, and back in York, I felt sober again once the drunken hoardes of racegoer scum joined me in KFC for a cheese and bacon meal.

Another great day on the BRAPA trail, and I'll be back on Tuesday night for something outlandish as work are actually letting me leave at 4pm!   Greater Manchester here I come.