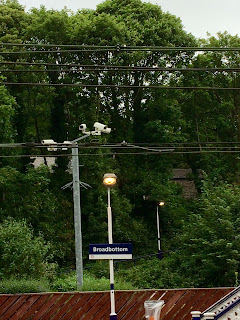 After a day at work involving many terrible Broadbottom gags ("that's very personal, how dare you to talk about my posterior like that hahaha"), they let me leave early enough to get the 16:53 from L**ds to Manchester.  To be honest, my work have something called "life event days" and because visiting every pub in the Good Beer Guide is a life event for me (i.e. a step nearer my lifetime goal), I should get loads of holiday - but alas no.

I hopped aboard the Glossop-Hatfield loopy train from Manchester Piccadilly, and was just sat there waiting for departure thinking "there's a very eclectic mixture of weirdos on this train" when a guard comes down, shouting "anyone for Middlesbrough, you need to be on the train in front!" and all the weirdos (apart from the Thatcher's Cider drinker in red t-shirt) hopped off with a startled look on their faces!  Absolutely true.

I was soon in the rural surroundings of Broadbottom, walking the wrong way to the pub cos I had no signal, but recovered myself and it was very close to the station, even closer than the 5 mins walk the GBG had reckoned...... 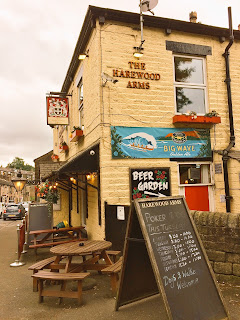 As I approached, an elfin barmaid (probably older than she looked) was smoking outside, she said "ow do" (or something) and I nodded and wandered in.  It had looked a nice pub from the outside, and inside was even better with beams, wood panelling, old pots and Toby jugs hanging from the ceiling, some hopbines, even a pool table, and some proper red bench seating.  I must've got carried away cos somehow, Miss Elfin was now behind the bar trying to serve me - how did she shapeshift like that?  The ales were all by local Green Mill brewery, so I got a £2.60 Ella but was conscious a man stood dangerously close to me had appeared and ordered same thing.  We were served simultaneously, he was referred to as "Rollie" (interestingly, the name of the new solar powered lawnmower in Neighbours) and he also sat down dangerously close to me!  Luckily, he started chatting to the other guys, pub weirdo danger averted, for once.  Problem was though, his cough.  He already had an accent like Fast Show's Bob Fleming, and a cough to match, which after a while I realised was akin to most people breathing, a nervous tick?  The pub chat was lively, mainly people getting mad about politics but someone managed to kill the entire mood though with the innocent comment ""Do you know, I went to Altrincham today?"  As the tumbleweed blew across the pub, Rollie started rolling up some errm roll ups (perhaps how he got his name) and when he went outside to smoke, one of the lads he'd been chatting to said "don't abandon me with him!" (not sure that makes sense).  Then they all left together, and poor Rollie reappeared looking bemused.  I hid behind my GBG.  This was until a woman called 'Clarkie' arrived, told a dog it was 'savage' (it was), and wrestled it to the ground.  Rollie announced to the pub the weather forecast for Thursday was bad, and he was going to watch his daughter swimming.  Sadly for him, no-one responded so he got back to his coughing.  There was a bit more dog loving, a randy black poodle this time, and I had to skirt around the evil things to put my glass back on bar, but a really superb pub this.


The journey back went better than could be expected, because we were in Manchester 19:39 and there was a 19:42 direct to York from the adjacent platform, so how lucky was that?  Down in first class, two final year student blokes had just made friends, and were talking about the need to look for employment.  I kid you not, the big haired one said "the real world is a fucking scary place!"  Gotta love students being parodies of themselves.

So what's next on the BRAPA agenda brenda?  Well, the month end review and July preview is out on Friday.  I have ordered the new BRAPA 'kit' for the 2017/18 season and will reveal all soon (so to speak) on Twitter, and Saturday sees me back in the second most important county of 2017, Cheshire.
See you all soon, Si-bomb.