You couldn't blame me for missing the bus stop in Kirkheaton.  I'd had a crazy day, firstly winning the "Yorkshire Bank BRAPA Employee of the Month" award, then my bathroom people confessed I had no toilet to wee in for 2 days, then my dentist told me I needed some mysterious treatment I wasn't aware of.  Yes, I needed a pint after that day.

Had I stayed on the bus, it actually would've gone round in a circle and stopped outside the pub a few minutes later anyway, but how can a visitor be expected to know how crazy made-up West Yorkshire villages like Kirkheaton (Kirkstall + Cleckheaton) work? 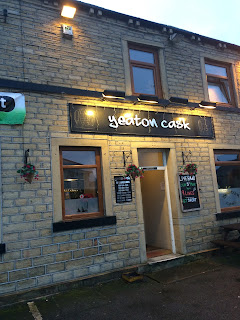 The pub had that kind of wooden flooring that goes "clomp clomp clomp" when you enter, so all the bar perchers were aware of an interloper in their midst.  Luckily, the landlady was an ultra friendly woman, telling me there was a blackboard to view all six beers but I told her I needed to see the pumps to make an informed choice!  She then apologised for not turning the pub lights on, as I squinted to count my change in the dark.  I liked many things about the pub, most notably the wood-burner keeping my good recent run of "seat in front of the fire" going.  I had to pirouette awkwardly on my seat, so I was facing both fire and pub - so as to appear more sociable.  Some tropical fish swam happily above my head, and the toilet doors were Wild West saloon swing style which I've not seen since Bingley 2013.  I thought about stocking up the wood burner myself but the landlady didn't want customers doing it in case they burn themselves and sue the pub!  A dog made some of the weirdest wimpering dog noises in BRAPA history.  And then a little capped lesbian vaper lady became the honourary "fire bum warmer" of the evening, there's always one.  She reminded me of a customer me and Dad used to see in a pub in Irthlingborough with bullet holes in the windows which sold Websters, we named her "female Ryan Williams" after a terrible Hull City winger of the time.  I reflected that given a bit of carpet and bench seating over posing tables, you could be looking at a classic here, I still enjoyed it a lot - this it's first year in the GBG, fully deserved.  The landlady wished a group "good luck" and I realised they could only be Huddersfield fans off to a match.  Another short haired woman came in (very much the Ruth Davidson of West Yorkshire), scowled at me, and stood at the bar eating complimentary bar snacks in an angry European manner.  It was time to go. 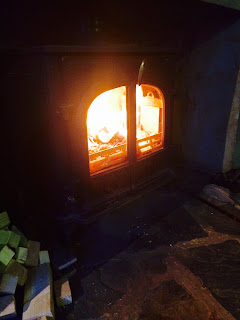 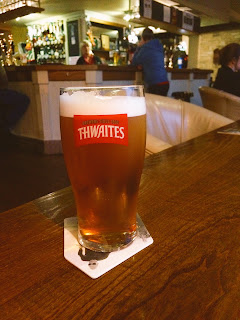 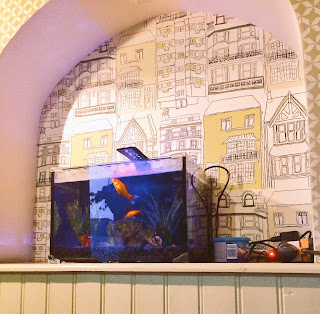 The bus did more weird circular tours of Kirkheaton before zooming back to Huddersfield (the driver was a total nutcase) and with a bit of time to kill before the next train to York, I popped in the wonderful King's Head for a swift half, totally forgetting 'Town were at home to this team called Reading.  I was wearing blue n white so everyone was very friendly, and a lone anorak Reading fan let me share his table, muttered something southern and inaudible and let me read his paper, which was nice!

It is day 4 of my bathroom fitting and peeing in a bucket and then rinsing it in the same kitchen sink I have to wash in really has been quite an experience, and one that makes me seriously consider my earlier question, what pubs have showers/bath facilities?

The good folk of twitter have alerted me to three.
1.  A truckers pub off a motorway near Rotherham selling one ale.
2.  A pub somewhere near Swansea
3.  A bar in Glasgow (possibly Duncan's house) has half a bath and serves cheap Tenants and Frosty Jacks.
Tom also says any GBG pub with the bed symbol should count, a good point but I mean ones that anyone can use regardless of staying overnight.

So that was fun for you all.  I'm off to meet my friends at York's incredible Three Cranes in the York Pub Champions League Group E soon so gotta dash, I have a 'bonus' tick tomorrow night and I'm splitting my weekend pub ticking into two mini-days of three pubs each, mainly due to Saltburn's stupid club opening times.