You know the weekend is finally here when you land in Fitzwilliam station, only to be told by Google Maps (which loves a joke at my expense) that you are to walk 1.8 miles along muddy waterlogged dirt tracks through sinister looking woodland to get yourself to pub number one ..... 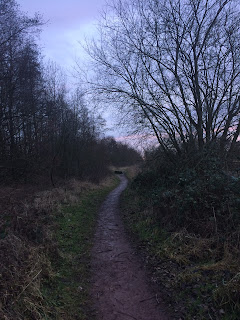 Despite ruining a perfectly good pair of retro Hummel trainers, I was soon back in civilisation (if you can call the area between Wakefield and Pontefract "civilisation") and after walking along a winding road called Bell Lane, I found the pub .... and it was still just about light, suggesting spring is on the way. 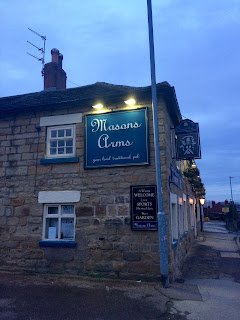 An impressive roaring fire on the left as I walked in, wall to wall with grinning raucous locals absolutely loving their Friday night drinks, sausage rolls on the bar, a friendly barmaid asking genuinely "how are you?" and calling everyone "luv", some pubs are just fantastic from the moment you enter.  Shame I chose an Exmoor beer ahead of the local(ish) Bradfield ones, but that was my only mistake as I found a stool 'twixt front door and the fire to keep my recent "seat in front of the fire" record in tact, and none have been as impressive as this hearth.  Perfect for drying the mud off my shoes.  I was facing the main instigators of Masons Arms Friday night jollity, and with so much chatter, I couldn't hear much conversation, but when I did, I almost regretted it.  Firstly a woman on a pub crawl revealed she had to break off part way through - "I've gotta nip home at 8 to inject the dog .... he's diabetic".  The things you never think you'd hear in a pub.  But even worse followed, "you can't buy minge lube in Tesco".  Woah, did she really just say that?  Repeating it 4 times actually stunned even the loudest people in the pub into an awkward silence as I stared sternly into my Exmoor, pretending to discover a depth of complex flavours that didn't exist.  A few locals stared intently up at "The Chase" on the ITV screen as if it were the World Cup Final.  A posh version of Albert Steptoe kept coming over to warm himself on the fire a la Emley woman from Tuesday.  I said hi and bye, for my bus was due.

A (delayed) short bus ride to Hemsworth was next up, and the main reason for this Friday trip due to their inability to open on Tuesday evenings like a normal West Yorkshire BRAPA pub.  I had been warned about this town from my sister's boyfriend who was brought up here, but I was still not prepared for the zombie apocalypse style locals on every street corner, red eyed, drunk, hungry for human flesh, York human flesh. 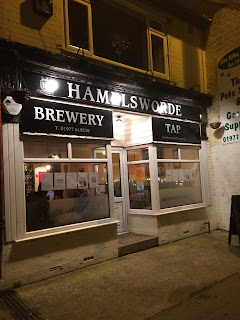 So it was with some relief when I slammed the door behind me of this little safe haven, brewery tap by name but micropub in reality, though by no means a dud for it had a bit more depth to it than most.  In some ways, it was a bit like entering Doncaster's Little Plough, sanctuary when all outside is madness.  I was greeted by an eager blondie with red trousers I liked, who seemed keener to take me through the range of continental lagers and fridge bottles than the ales, strangely.  Once she realised I was a boring CAMRA beard anorak, I got an extra 20p off and paid about 6 shillings for my pint, or whatever currency they use in Hemsworth.  Two bald men were trying to impress the whole pub with jokes about their own baldness, the type who insist on wearing it like a badge of honour, urrrgghh.  They left soon after to much relief from the assembled crowd (despite leaving with a barrage of rhubarb and custard jokes which made no sense), an attractive couple of the window who we'll call Freddie and Amelia, a middle aged couple who hated each others company but loved the fact smartphones had been invented, and a huge pinstripe suited dude who sat at the bar (practically on my face) telling the now bored barmaid about his work jaunts to Newton Aycliffe and Stockton on Tees.  She'd rather have heard about BRAPA, I expect, but that's how the Hemsworth cookie crumbles.  It was quite dull after that, though my off season Christmas ale was a winner.  A woman came in and protested too much about not being a regular and not really wanting to try the new Prosecco but had time to kill, so she may as well.  Time to run for the bus.


It was deja vu from Emley at the bus stop as it just didn't bloody arrive (I even checked the times at the stop) and after 20 mins, I took matters into my own hands and marched to Fitzwilliam station.  My luck turned as the next train was just delayed enough to enable me to get it, and once in Leeds, the same happened with a York train.  So even if the bus had been on time, I'd not have been home any quicker, just bored and colder.  So hurrah!

I'm getting close, only FIVE West Yorkshire pubs to do.  Back on the trail on Tuesday, but how weird are this pubs opening hours......? 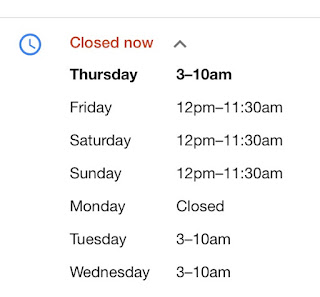 I love a good all nighter with a full English Breakfast just before closing!

I'm having a new shower/bathroom fitted this week.  This is relevant to BRAPA cos (a) I'd rather be out and about than in a bathroomless flat, so expect much BRAPPing over the next fortnight.

And (b) I want to ask if anyone knows of a real ale pub out there with a shower you can use?  I confess I don't seem to recall one but it'd help massively.