It was time for Hull City's annual visit to Burnley.  Seriously it doesn't matter whether or not we play in the EPL (spit!) or the Maidstone & Snodland District League Division 5, Burnley would still be in our division.

After a 17 minute bus journey, we were in Padiham.  It wasn't the sandstone hillside Pendle village I'd imagined in my mind's eye with a friendly witch stirring newt eyes into a cauldron, but just a busy road to Burnley with a bridge over a river, a few shops and random buildings on each side.  Still seems a strange place to have your hen-do, as my manager at work did.

The pub was off the main road, up a cobbled hill and we arrived dead on 12 noon to find the erstwhile Tom Irvin outside, soon joined by an old local at 12:01 anxious a late opening might stop his enjoyment of the Manchester derby.  Finally (well, 12:02), that happiest of all sounds as the door was unbolted from within...... 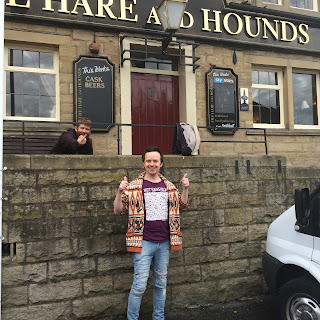 The pub was suitably multi-roomed, dark and a tiny bit dingy despite the sunny morning - perfect!  A good range of local-ish ales were on (I tried the likes of Coach House, Worsthorne and Accrington's Clock) and Dad was swiftly admonished by the young barmaid for suggesting that a 7.3% stout was a  "bit strong".  She wasn't  joking.  I think this shows us that she isn't the kind of girl who'd fret about a sheep cushion being moved, but it didn't stop Tom trying to get me into trouble for moving it .... had I been 'barred' before my minimum 25 minute stay, there'd have been trouble!  As it was, she was looking for the remote control and with the Manchester derby on three screens, fresh beermats handed out to the customer's like a card game, and the smell of wet dog (lolloping at the bar) neutralised by cigarette smoke (it isn't 2007 in Padiham yet), the pub really started to swing into life.  When I say 'life', I mean the ever-so-slightly terrifying clientele.  Twilds who you wouldn't dare call twilds had mini mohawks and troubled stares, their parents all tattoos, fake tans, tracksuits and hooped earrings.  I didn't dare photograph them.  To ramp up the "local interest" element, someone on Twitter told me that this pub is known locally as the Stabbers Arms after the landlady's partner followed a customer home, stabbed him, customer then returned to pub (presumably for a last rites pint of 7.3% stout) where he died on the pub steps.  We speculated on whether anyone currently here might have been involved, and Dad whispered "they probably ALL have tags on and are out on day release".  After this story, there was no chance we weren't going to take part in the pub football team raffle (I chose Hull City & Hibs) but I haven't been contacted with my winnings yet.  Memorable pub! 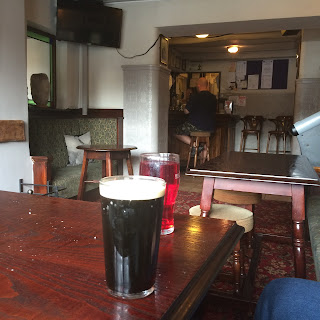 After one of the more enjoyable 90 minutes at Turf Moor, I was walking away from the ground when I stumbled across this club looking like it was going to sell quality real ale, and despite a stern looking skinhead with folded arms outside the closed front door, I snuck in through a side door. 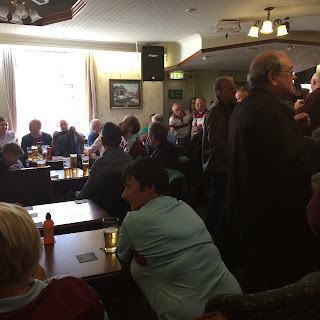 I suddenly had to set my expression from "94th minute equaliser euphoria" to "abject disappointment" as I saw the sullen faces of the Clarets packed into the room.  I revealed my Notsensibles band t-shirt (Burnley's finest early 80's irreverent punk band) and shook my head at a kind old man as if to say "HOW did we not hang on for victory?" and before I knew it, I was in the inner circle being served Reedley Hallows superb ales - easily my pint of the day and it'd be nice to think this club would get in the 2017 GBG when it is released on Thursday.  I perched on the end of the bar, a good way to see how ultra hard the army of staff were working and I don't think I've ever seen so many empties being returned to the bar in such a short space of time.  Robert Snodgrass did a lot for local beer industry yesterday.  I couldn't really move enough to leave the club (good excuse), so ended up staying for another where the kids and women started to disperse (the men said they were staying for just one more) and I finally got a seat for the last 10 minutes. 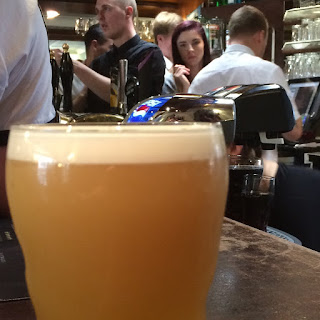 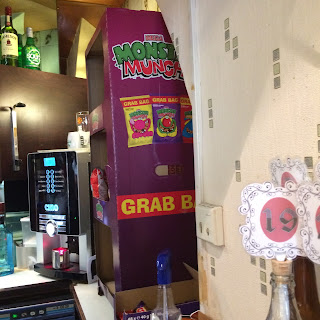 Back in the street, the football traffic had cleared and I had time to pop in to the Ministry of Ale for a final drink before the train back to York, via L**ds.  The Ministry was one of my original favourite real ale pubs, surprised it hasn't been in the GBG in recent years, and I was just starting to suspect a falling out with the local CAMRA (politics!) when on this occasion, my beer was rapidly descending into vinegar.  At least I got a nice chat with some stray Tigers. 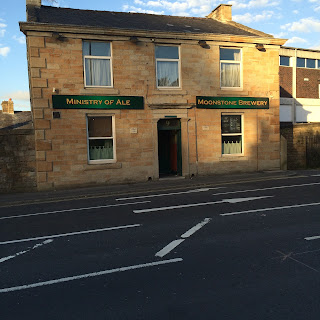 So all in all, a pretty good day out and sat here 7:30pm on Sunday, still feel a bit hungover!  On Ripper Street this week, Drake asked Reid why on earth he'd leave his peaceful seaside town to return to the grime and seedy crime of 1890's Whitechapel?  "Because this is where life is!" and exactly why I'd take a million 'mild peril' pubs of East Lancs over a sanitised gastro buggy-friendly non-threatening place in South East London.

I'll be back in South Yorkshire tomorrow evening for more pre-emptive fun, and will write it up on Tuesday.  Have a good week and get down t'pub!