BRAPA - Crosby , Half of Waterloo & a Scouse Pie

Following a conversation back in June about those Antony Gormley statues on the beach, myself, Dad and Tom had organised a visit to Crosby and surrounding area with plenty of BRAPA ticking potential.  It was Tom's birthday, so his Father Chris (not a priest) joined us too to swell the numbers to four.

The journey was notable for only two things.  Scouse babies are the loudest whiniest babies in the UK and helps me understand why Goodison Park's atmosphere is like it is, and secondly, the shade of yellow used on the Mersey trains is the most offensive shade of any colour in existence.

The day should probably have started with a huge cooked breakfast from Wetherspoons with hindsight (more on my memory loss later!) but as it was, we had to make do with a local bakery where I bought a Scouse Pie (more on the later too) to line the stomach.

After 5 minutes of Dad looking in estate agent windows and deciding he wasn't going to move here any time soon, the pub was actually open early so time to stop messing around and go in ...... 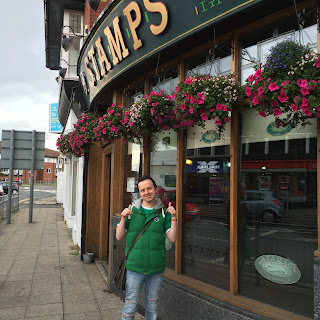 I'd mentally prepared myself for a micro-pub so it was nice to see something a lot more traditional, even if it did have modern leanings.  Our rosy cheeked barmaid seemed a nice if slightly nervous lady, and had to shut Chris down when he asked about CAMRA discounts, something I never do unless it is obvious for fear of reprisals (e.g. those pubs that think CAMRA members are all scum).  With beers on like Oakham Citra and Titanic Plum Porter, anyone would be happy and my Boris Citrov was excellent.  Dad had already decided this was probably going to be pub of the day, helped by 'North Liverpool's first vegetarian menu' which he rang Mum about, but to me, ordering something called "No fish, chips and mushy peas" is asking for trouble, or an expensive empty plate!  I'd inadvertently sat us in "Kids' Corner" with it's wonderful apostrophe but I left the SpongeBob colouring book alone.  No kids were to be seen but a vacant old man on his 50th pint of Plum Porter before 1pm looked at us in a wistful way.  Younger relatives soon joined him and took him back to the care home.  Always the best style of pub music, 50's rockabilly, was playing (well unless you count Judge Dread or George Formby) and under the stairs was a piano and a drum kit so this must be quite a music venue too.  I went back to the bar for a swift half, and a most hyperactive woman was telling one of those heartfelt impassioned stories with no pauses that made her voice go higher and higher - the only bit I picked up was "the mushrooms were cold and the beans were still bubbling".  What an anecdote. 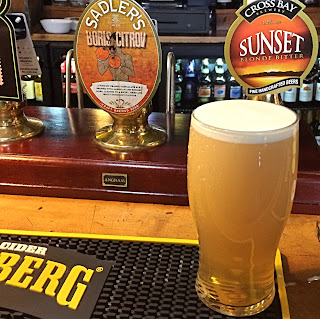 Just gone 1pm then and we reached our second pub, named after some extinct Scouse bird (not Cilla Black) and this one really was a micropub, yet it had comfort, warmth and enough space to swing a cat despite the usual trimmings (i.e. no blackcurrant cordial for Tom, he slummed it with lime).  I scanned a good range of Blackjack beers but went for a Salopian Oracle because it is so good.  I then became perhaps the first person in a pub this year to start a conversation about the perils of deciding to wrap chicken livers in foil in the fridge, and wake up to find a bloody mess in the kitchen!  It certainly inspired the barmaid to join in the conversation, she was a great people person, and with a York pub trip booked, we were soon advising her on where to go (though she seemed to know).  She told us about a micropub potentially opening on York's pretentious 'Bishy' Road, something I hoped I'd never hear, York doesn't need one like certain places rhyming with Giddlesbrough do.  Next, I heard a strange "eeeeeee  .... calm down" sound coming from my bag.  Of course, it was my Scouse pie made from the locals themselves!  Very tasty, but in stew form, impossible to eat without cutlery so I just stuck my face in it.  If I'd done this in about 80% of UK pubs, I'd have been chucked out.  A really good pub this.


Bit of confusion next as our third Crosby pub wasn't listed on the GBG app.  My first thought was that it had been de-guided already, but a check online at least showed it was open and selling ale, so we went along, hoping it was just a CAMRA error.

Well, if you want to have your faith restored in micro pubs, Crosby is the place to come.  Another wonderfully cosy and friendly establishment, even on a grey Autumn day, and nothing to suggest this shouldn't be in the GBG.  Only seconds in and a couple were confirming the sad details of the Lion Tavern's demise, plus the Grapes is being refurbished which means I'll have to re-think the Liverpool stag do pub order in a fortnight.  Seems that a 'perfect storm' series of events led to the Lion's demise.  As I was told it, Pub Co and landlord both acted like chumps, Liverpool CAMRA focussing so much on saving Roscoe Head that this slipped under radar, compounded by Moorfields station closed for refurb meaning it lost loads of passing trade.  Sad times but it might be back.  But I had bigger problems,  The 'Havok' beer I ordered absolutely killed me, 5% but like paint stripper.  Ugh, Chris offered me chance to change it but to give you an insight into my mental state, I revealed a voice in my head wasn't allowing that.  Not only that, the voice I could hear belonged to Rolf Harris!  If this wasn't bad enough, my bag was leaking Scouse Pie residue, all over my GBG.  If you've ever tried to lick Scouse Pie off a GBG, don't, it tasted too gluey.  And made me look a bit special.  At least the landlord was a friendly chap and had tissues and a rubbish bin at the ready, though learning about an annoying gang of West Midlanders who wear beer towels and visit tonnes of pubs wasn't going to improve my mood.  It's testament to how good this pub was that I came away feeling anything other than very pissed off!

A friendly, chirpy lass helped us find the railway station and we went back as far as Waterloo.  She was about to start work there, and liked the idea of BRAPA like anyone with any taste would.  Obviously.  A jolly chap on his phone enjoyed learning we were Hull City fans as he was telling the carriage Liverpool were 3-0 up after 35 mins.  The lass (think a more tanned, less red headed Sonia from late 80's Stock, Aitken and Waterman fame) pointed us in the direction of our next pub......

I'm glad we have the above and below photos as evidence we came to this pub, because to a man, me, Chris and Dad had no recollection of it once we'd sat down in pub 912.  Wow, that Havok really was strong (or this pub was lacking any memorable characterful quirks!)  Even Tom seemed very hazy on the details and he'd been on the cordial.  Like a brain injury victim, the photos helped a few memories come back, none of which are interesting in the slightest,  Here goes.  Chris was excited by the Marble beers, I told him I refused to order "Pint" on the basis it always gets confusing and jokes about ordering 'half a pint of pint' always go down like a lead balloon.  I did a quiz on Hull City's first half stats as they were so utterly dire it was hilairious.  I read the half time scores James Alexander Gordon style.  Chris pinpointed some Twilds but Tom downgraded them due to their well behaved natures.  Some Archers pump clips got us reminiscing about the pubs on Spring Bank in Hull.  But all in all, what we in the BRAPA field call the "Elm Tree Syndrome".

Dad had a train in mind for getting back, so we only really had time for one more pub tick if the rest of us were to join him, and let's face it, I felt drunk enough,  So we choose here over the next door Spoons.  This pub was a lot more promising in than out, and another great local hubbub as folk milled around a bare-boarded bar area to see the football scores coming in, one woman telling me she could not believe Everton could lose to a team like Bournemouth.  We sat in a raised area, but my beer tasted like tomato and basil soup.  After a third of a pint trying to work out whether that really should be the case, Chris took it back for me and the Sandgrounder replacement from Southport was better in that it actually tasted of beer.  At least Rolf Harris's voice had stopped me sticking with it this time.  Maybe we killed him off in Stamps Too, and that is what wiped my mind.  Dad said that the piped music here was almost EXACTLY what was on his iPod.  The toilets smelt like parmesan, or was it sick?  Anyway, no sooner had a decided than a bit of a furore swept over the pub as Benteke scored a 94th minute winner v Sunderland.  Sorry, where are we again?  West Croydon?  Anyway, after a bit of Dad rage when a terrible version of 'Sounds of Silence' was played. it was time to go for the train.


After some classic Tom train jiggery-pokery around Lime Street, we were back over the Pennines even quicker than imagined.  Me and Chris popped into York's usually brilliant Maltings where a barman was having his leaving do before his big money transfer to Three John Scotts in Hull.  Got talking to his mate, a nice lad who was a big Harry Maguire fan and for a Sheff Utd fan, remarkably civil.  The ales from Alloa and Rudgate on fine form.

It was fish n chips and football league show for me, and an early night.  Great day out, and Merseyside doesn't look too much of a difficult 'county' to complete.