11am on Thursday morning and all was well with the world.  A day off work, the kind of beautiful summer's day we never get in summer, my York Beer Festival hangover had subsided, and as Dad was presented with his "two year chauffeur contract", Mr SatNav was at his stoic best, failing to tell us about various country lane turnings until it was too late.

I changed the starting pub three times in the first half an hour, but after a tortuous drive through the centre of Harrogate (very much like a tough piece of beef stuck in an intestine), it was 12 noon and I screamed "STOP!" as we tore past pub number one on the main road.  A quick U-turn and we were in the car park.

Being the first "official" 'tick' of the 2017 Good Beer Guide, I stomped into the wooden floored pub in cheery mood, asking the blonde daughter barmaid how she was today.  "Errm, I'm alright" she said in a pained manner out of the corner of her mouth, trying desperately to flex those facial muscles into a smile - but being a P.I.S.S. barmaid, she obviously failed.  After more painful interaction and me trying to pay using a stray dice I found in a pocket, we found a nice outdoor drinking area (can't quite bring myself to say 'beer garden') backing onto a field filled with sheep who kept hiding behind hedges.  Possibly because the smell of roast lamb was emanating from the kitchen.  Dad was being a bit lame, reckoning it was too hot, and not for the first time today, he played his "wasp get out of jail free card" by saying the insects were hassling us, trying to get into our excellent quality pints of Jorvik Blonde by Rudgate.  Being inside a least allowed me to get a feel for the pub, the quirkiest point being a bust of Beethoven staring down a glass covered well.  I then confused Dad by asking him if this was the Boyzone version of 'Words' or the Bee Gees original.  Mum landlady was even less smiley than her daughter, Dad appeared to be on Crack Cocaine.  The music was awful, the pub average and although Dad sporadically kept making assenting noises, "ooh I could bring your mother here", "quite nice", "decent pub this", as soon as we got back into the carpark, he stated "well, that was incredibly average wasn't it?"  And it was.

We carried along some rather extreme country roads (I almost feel guilty for making Dad do this driving lark) but we soon arrived at Malham.  And it was HEAVING with bloody school kids.  Where were the teachers?  In the pub.  Of course.

We'd both been talking about various school outings around here from our youths (me at the horrific Bewerley Park in the depths of January, Dad at some cave dwellings probably sometime B.C., he wasn't sure on the year).

Having found a free car park but still needing to go "off-road" and park on the grass next to a tree, we had to walk past the schoolkids, who were all about taking selfies with stalactites and testing soil pH levels with iPhone apps, the youthy scumbags!  Anyway.  a square jawed black haired chap of suspicious friendliness (you could see him thinking "pints only, no food, and they aren't teachers, what is their game?") served from a good ale range, my Settle Mainline was very meaty.  We pushed past bikers in shorts and guilty teachers to find a bench seat, but this pub was hellbent on committing a plethora of BRAPA sins.  Pointless piles of logs near a fire - check.  Knives n forks on all tables- check.  Chintzy cushions making it hard to sit on flimsy bench seating - check.  Top Trumps style cards of all the staff pulling funny faces to make them look 'humourous' - check.    Uniformed waiters kept disappearing outside, to serve coffee, scones and jam to old people.  So I hope you are getting a picture of why this wasn't pub of the year, without being terrible.  Saddest thing was the tankard being used to hold 'our' knives and forks was etched with the year 1935 and the name of presumably a former customer when this pub was quite different / better!  My favourite part of the pub was the toilets - underground and refreshingly cool.  Wish I'd drunk my pint in there.

Parking in the famous and picturesque village of Grassington was even tougher, we had to pay and display here and still walk in, cursing the hot weather bringing out the tourists.  However, this was a much older crowd.  Topless old gents sucking up vanilla ice cream with sunburnt faces happily staring into the sun with vacant expressions.

After two pubs lacking in what I could say was "true pub character", we were rewarded here.  The barmaid was on her phone as I scanned the bar to find the guest ale, obscured by board at the far end.  She must have seen us come in, for although Dad had long since disappeared to the loo, she turned round to ask "what would you both like?" and quickly looked puzzled as I turned to my imaginary friend and said we'd both love a pint of Wharfedale Blonde.  She did redeem herself by calling me "Sir", a nice addition to September's South Yorkshire pub greetings of "Duck", "Cock", "Luvvie", "Pal" and "Chief". The pub certainly was trying to give a rustic impression of still being in the 1940's, with money saving war slogans, an old typewriter, and pictures and photos of the pub from yesteryear.  It was perhaps a bit forced, but a nice sentiment.  Back in the 21st century, one of my favourite occasional BRAPA moments ensued when an old chap brought his Filipino bride into the pub - "give 'er a pint of blackcurrant!" he ordered (he may as well have added "whether she likes it or not!")  She later escaped his clutches to return to the bar, asking for 'pork crisps'.  After some confusion, turned out she wanted scratchings and there was much relief I can tell you.

Later on, our barmaid shouted from the kitchen area "shall I put the chicken on?".  In the true spirit of Martin Taylor's ace blogs, your quiz question today is "What was Dad's reply?"


We meandered back towards York, taking a slight detour around the Ripon / Knaresborough area to help me get up my 900th pub - that is 1/5 of the GBG.  And this time, it was a bit of a happier experience than the Dulcimer in Chorlton-cum-Hardy.

What is this strange rural North Yorkshire phenomenon?  Yes, I do believe it is a friendly, happy, fully engaged and personable barman.  Well well well.  A rarity.  And what a lovely chap, bit concerned that a beer called Lemongrass Thai might need a "try before you buy", and despite some faint Fairy Liquid lingerings, it was pleasant on a muggy evening.  The pub was a little bit foody with a more traditional drinkers area near the bar being leant on by locals, so we went outside where earlier, a nosy old couple had watched Dad try to reverse into the smallest car parking space ever.  A bit like the low roofed pub, it seemed to have originated from a time when people and cars were a lot smaller!  There was a real calmness about the place despite a busy main road out the front stopping it from achieving full "Criggionesque" levels, and even the slow moving wasps, confused by the September heat, were not being threatening enough on this occasion to force Dad back inside. I did threaten to kill one with my new 2017 GBG but it crawled into an old woman's discarded glass of Prosecco and immediately died anyway.  Probably. 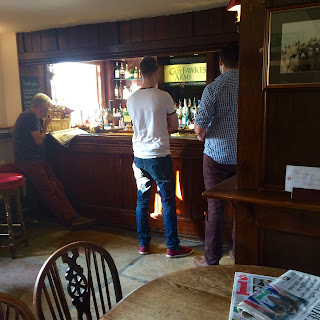 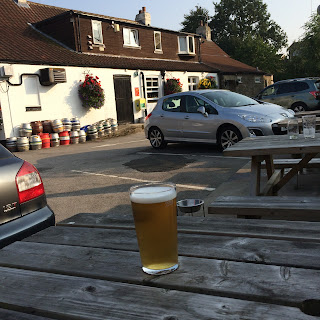 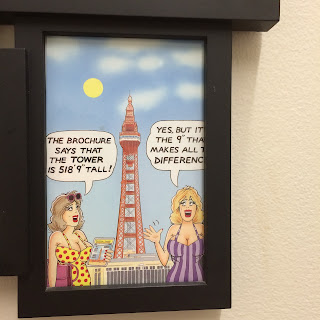 There was no time to pop into the non-GBG listed Fox (no I'll NEVER let that one go!) on the way back as Dad was cooking tea for the ankle invalid, and I had to be well enough for a project at work the next day.

Tomorrow, I'll be back on the BRAPA trail starting in a county where I only have 14 ticks to my name, before moving to one where I have 62.  But I'm looking for the maximum six tomorrow (three in each) so here's hoping for a good day with public transport!  I'll write it up on Sunday.