Evening all, having a bit of a BRAPA 'mare as I came back from my Bank Holiday jaunt down south to find my laptop totally broken, the one which contains by 'Master BRAPA spreadsheet'.  I have it backed-up, but not very recently.  Anyway, I'll try and carry on on my reserve laptop as best I can for now, and try n get it fixed.  Don't wanna start from the beginning again do I? :)

Croydon, mid afternoon, Saturday 15th August and a friendly 60 year old bloke born in 1960 called Citra (his parents were fans of hop varieties long before it was cool) turns to me and says "wot pub you off to next Si?"

When I tell him I have three pubs to do in Clapham Junction, he expels a breath of skeptical North Hampshire air, but when I reveal the name of the next pub, he perks up and says he'll come with, he likes this one!  Well, well, well, I knew it'd been on the front cover of the 2015 BRAPA (sorry, I mean CAMRA) Guide, but didn't know any pub remotely near Clapham Junction could get the juices flowing.  How wrong I was.

I don't feel an affinity with Clapham Junction like I do with Croydon, messy transport interchange splurge which even in these 'coviddeo killed the radio star' times just has too many flakey fakers floating about within 5 mins of the epic railway station.

We strode out to this first Citra recommendation, it took us past all the dross, into a more secluded, dare I say peaceful part of 'town' which might be verging on Battersea, I don't know, I don't do the geography.  This was it. 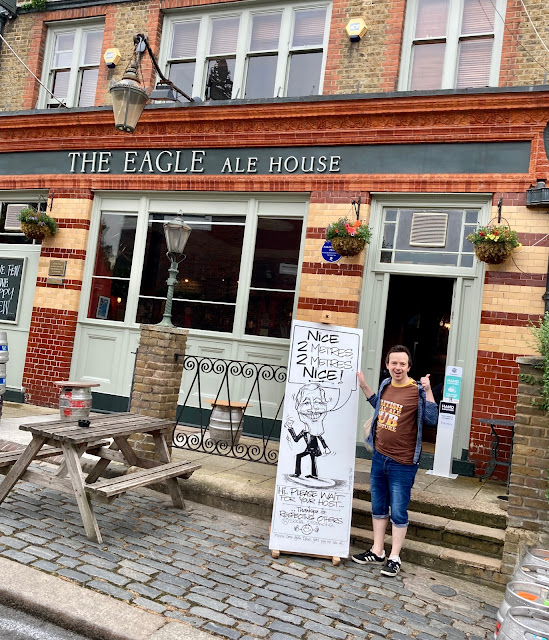 The Brucie bonus above laid the foundations for what was to come at Eagle Ale House (1813 / 3030).  A quirky, irreverent, some might say plain brilliant approach to navigating the social distancing route through post-covid pubbing, the perky guy on the makeshift reception desk explains all, Clarissa style.  We have the Hoff where you 'hang' and join the queue, you got Ainsley where you order, and then you have Susanna Reid (NOT Courtney Cox, Simon you idiot!) where your order is complete and you pay.  In truth, it was the staff who made it.  Even more charismatic than their cardboard cutouts, the young guy on the 'entrance' desk made me feel probably more welcome than any other pub in London BRAPA history has managed, and if I was going to lose my Oyster card anywhere and have it returned to me, this is the pub I'd choose. Which is good, cos that is what I did.  All the staff were equally chirpy, good humoured and just lovely - I guess they wouldn't just put ANY pub on the cover of the GBG!  Well done CAMRA, never doubted you for a second.  Loved the fact the pub was basic yet comfortable and homely, that deep red colour scheme is always a winner as we saw at Staines' Wheatsheaf & Pigeon recently.  "Old school pub, new school people" it shouted, and I think that sums it up quite perfectly.   And just when you thought it couldn't get any better, a barmaid asked about Colin.  Okay so she initially called him a cabbage, but corrected herself within two seconds, so we'll let her off.  More proof Colin gets more love in London than he ever did in Surrey!  A true great this pub. 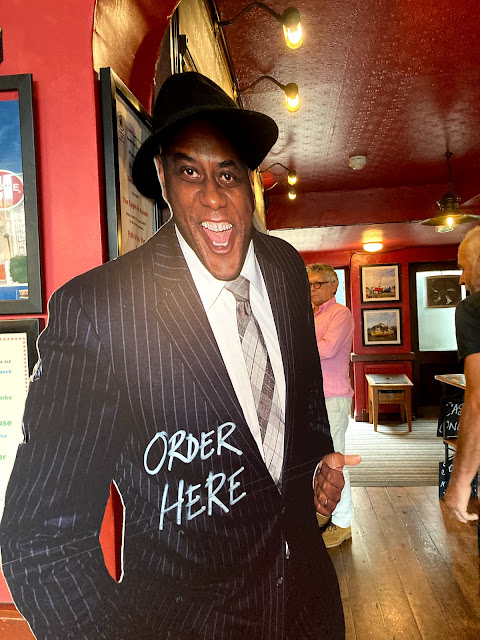 We left, smiling and revitalised.  How could the day get any better from here?  It couldn't of course, it was all downhill from here.  Interesting though.  First, as we got back onto the main drag, we came across my busiest pub since 4th July, and by quite some distance.

At least, in the sense that I felt uncomfortable and like I could catch Covid at any given moment, Draft House Northcote (1814 / 3031) will be one of my more memorable Draft House experience, the mini chain which are a bit Brewdog, a bit CAMRA, with a gaping hole inbetween filled with purgatory.  Swathes of tables outdoors packed to the gills, the hardworking attentive staff sat us indoors which we welcomed with open arms.  For one thing, we wouldn't have to drink out of plastic, would we?  Well, after about ten minutes setting up on the pubs App, we finally got two absolutely gorgeous pints of stout ordered, problem was i thought I could hear the staff behind me whispering 'oh, we've put their drinks in plastic, but they're indoors, oh well, never mind!'  Imagine how amazing this pint would've been in a glass?  Down at the loos it was even worse, a queue snaking back around the corner, and no one really sure which were men's, women's, either, 'twas a bit crazy.  Citra crossed his legs, I queued and chatted to some stoned dude about the insanity of modern life.  It was quite deep, i think.  Citra had been here before, and on a Saturday afternoon in summer, and could not explain the huge mass of people.  In the corner, a Slush Puppy machine chugged away slowly, terracotta n creamy, like it was stuck in 2002, unaffected by everything else in here.  It was quite poetic. 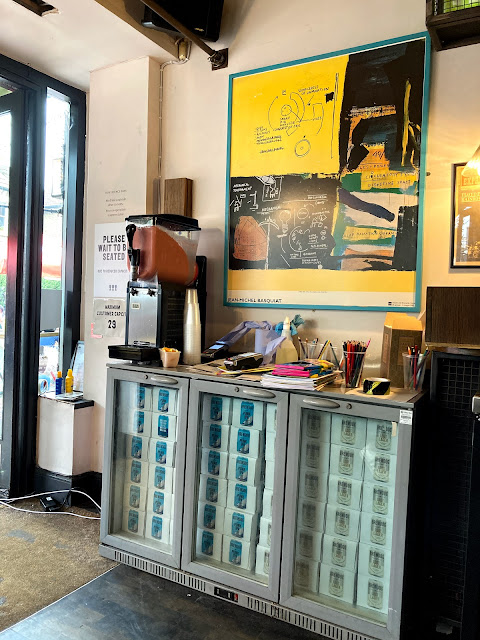 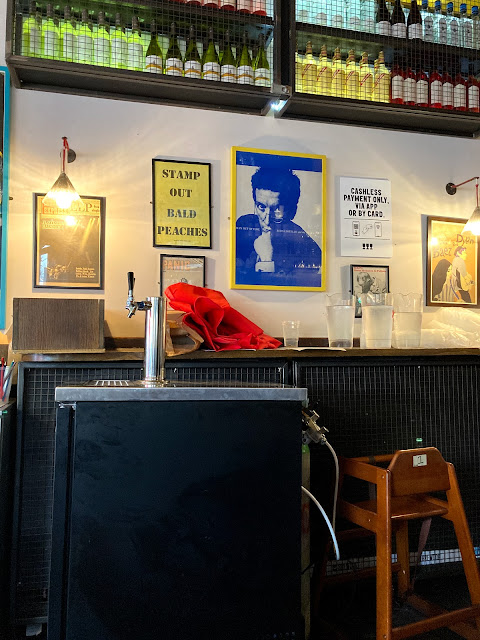 Our final pub of the day is probably not one I'd recommend attempting to do in a slightly drunk, mentally fragile state.  But here we were, best go in. 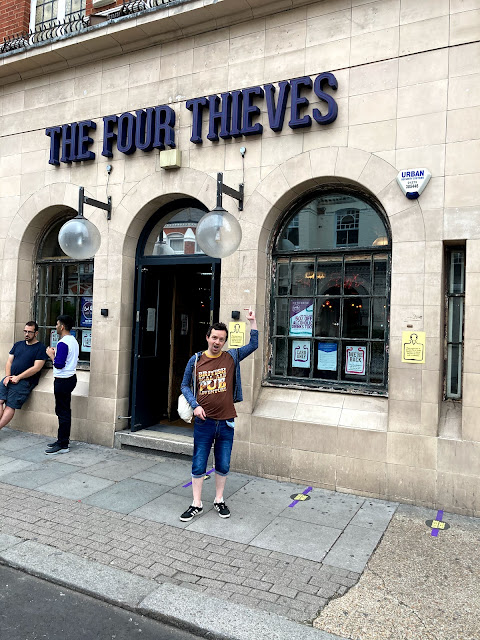 Doesn't look particularly unusual does it, but read the GBG entry for Four Thieves, Clapham Junction (1815 / 3032) and either I was so drunk to be blissfully unobservant, or Covid restrictions have toned down the ''fun".  'This pub has the wow factor' screams the first sentence in the GBG, enough to put most curmudgeonly CAMRA folk off before they've even got inside, including me!  It talks about swing classes, live jazz, a gin yard, table football, mini-golf, motor racing, and all sorts of 'electronic wizardy' (who wrote this, my Dad?)   The whole beer situation was enough of a wild whitewater raft of a ride enough for me.  The crazy blackboards, the decision to both go for this Honey & Cheesecake sour beer.  It was salty and tricked your brain into wanting more which tricked you into thinking you were enjoying it.  You weren't. And now I promise not to talk about beer again all year.  But the glasses they came in?!  I wouldn't put my dead goldfish in here, never mind beer, there's a reason for centuries glassware has been a certain shape, cos they fit people's hands.  But not 2020, thinks it can change all the rules doesn't it the utter bastard!  Throw into the mix two more unforseen external problems.  Cooking Lager asking me to take a selfie whilst having a dump.  So I do.  And then John Depeche Modem only bloody rings me.  I put him on speaker phone so Citra can say hi, nice to get Twitter people in communion.  If that's the word.  That refocussed me briefly, but not for long.  What exactly had just occurred?  Where am I?  Where's my shoes? 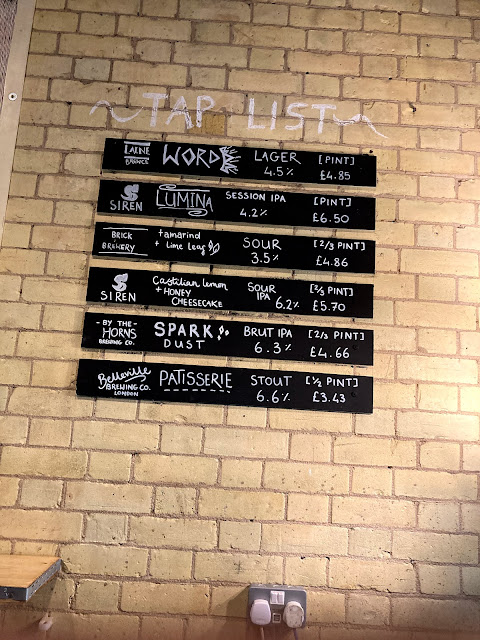 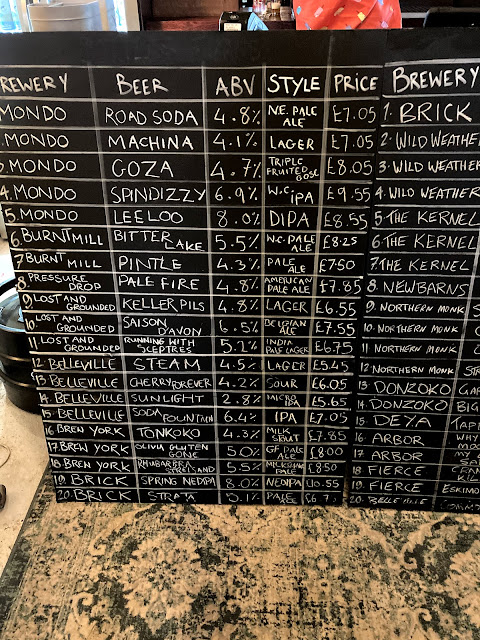 I said goodbye to Citra, he headed back towards Hants and I headed back up to King's Cross.  I remembered  I hadn't eaten all day so munched my snacks under an awning as the heaven's opened, but realised I had a long wait for the train home.  We'd obviously made good time!
King's Cross is rubbish at the moment.  Upper concourse not open, barely any seating, toilets closed, no coffee places or sandwich bars or even Parcel Yard open.  I knew I didn't need another drink, I didn't even want one, but I couldn't hang about here for over 90 minutes.  So I set off in search of Queen's Head which has always been quite good to me in the past.  Closed.  Should've prob looked for a MaccyD's or a Costa but in the gloom and driving rain, a pub twinkled out at me.  Pre-emptive? 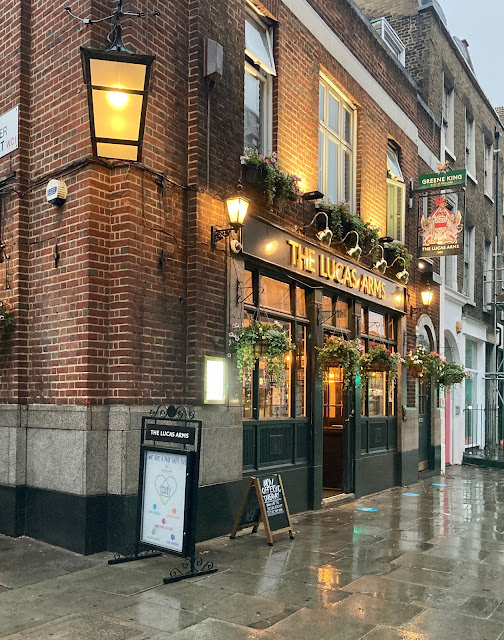 Lucas Arms was the name, remember it for when it is a GBG regular in 10 years time!  Not sure if it was my slightly wobbly state, but by 'eck, how confusing the rules seemed here!  After about 10 minutes of answering questions and signing in and looking at a huge menu, I was encouraged to slope down to the bar and order the only cask ale on, Abbot Ale, not the easiest beer to drink when you are struggled.  At one point, I tried to inhale, sneeze and drink at the same time and it all went up the back of my throat and back out through my nose!  Luckily, the gobby L**ds fans from Worthing didn't see, but they were unhappy I was a Hull City fan and started chanting stuff about my Cauliflower's never seen it's real Mother or something equally upsetting.  No wonder there's a much recommended micropub called Wankered in Worthing.  This pub was quite nice though, to be honest, after the last two, was nice to be in something,anything with carpet and shiny mirrors and chairs and stuff! But if I'm being brutally honest, I can see why it isn't in the GBG! 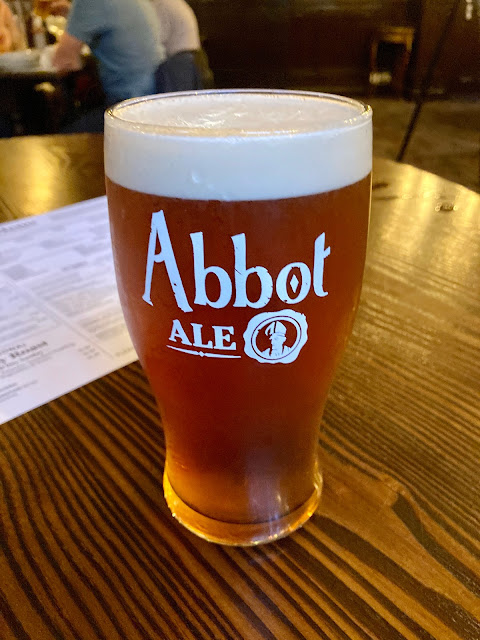 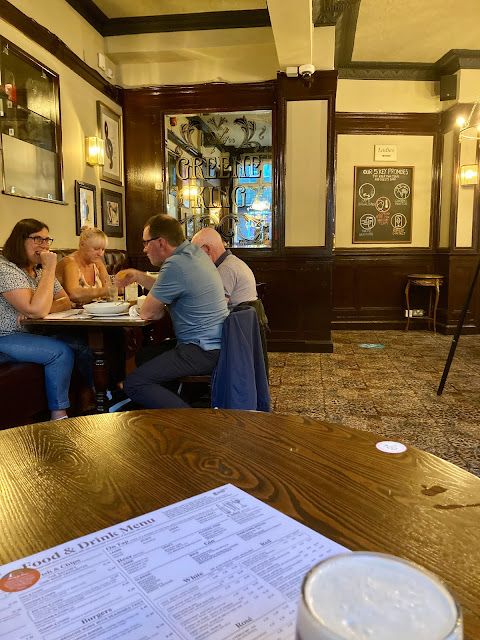 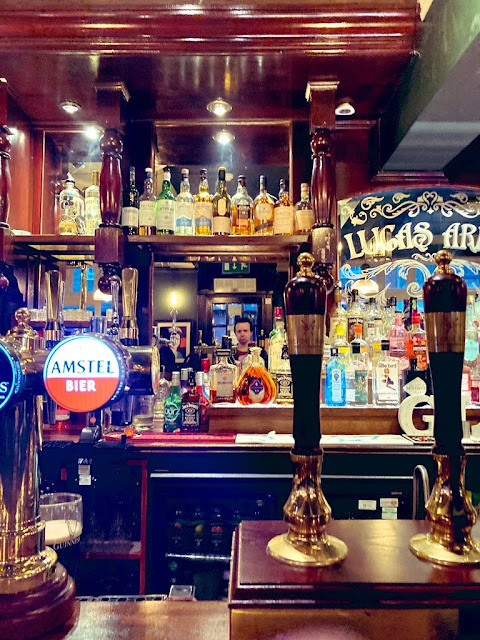 Nearly got on the wrong train but a man helped me, only 3 people in my entire carriage back to York, so I watched Hull City v Scunthorpe Utd videos on Youtube and listened to Shanice, Paul Simon and Survivor.
Great day, lovely to meet Citra, top chap, and six good ticks done which puts Croydon and Clapham Junction to the back of my mind for a couple of months at least!
See you tomorrow for more blogging, where we'll get stuck into Forest Hill & Catford.
Si