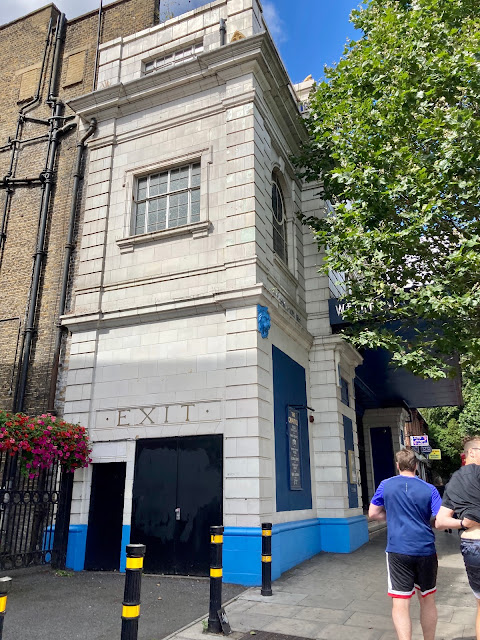 It might not be the most striking photo of the Grade II Art-Deco former cinema that is Capitol, Forest Hill (1816) but so determined was I to finally overtake the group of six I'd followed all the way from the railway station, and were now dilly-dallying at the entrance, scratching itchy backs (above), that it was a case of 'point camera in general pub direction' and run past them.  At the bar, I hastily ordered a Plum Porter which the many variations of never quite seem as good as the Titanic one.  As I handed over another Mudgie voucher (I'll be starting on the Simey vouchers by October at this rate, the number of 'Spoons I'm doing at present, absolute godsend to me since 4th July), I heard the two bar staff say "I still cannot believe <insert staff member name here> accepted a voucher that was two years out of date".  I asked her to elaborate, but the tale had run its course, so instead she asked me to complete the Track & Trace (if I wouldn't mind).  I didn't, but this was to be the first, but not the last 'Spoons to actively ask, rather than leave it entirely up to the customer.  The group of itchy backs had made their way straight for a table anyway, and finally I could sup my inferior PP and admire the grand surroundings.  It had a 'Blackpool Winter Gardens Rebellion Punk Festival 11:45am on the final Sunday' vibe about it, where the few zombies still standing stagger around the palatial arenas, waiting for the first band to start.  A man perched above me on a high stool, glaring at my Good Beer Guide and Colin, and I briefly wondered if he was this week's 'Pub Twitter' guest, alas he never made direct eye contact so I departed, aware five pubs still awaited BRAPA attention. 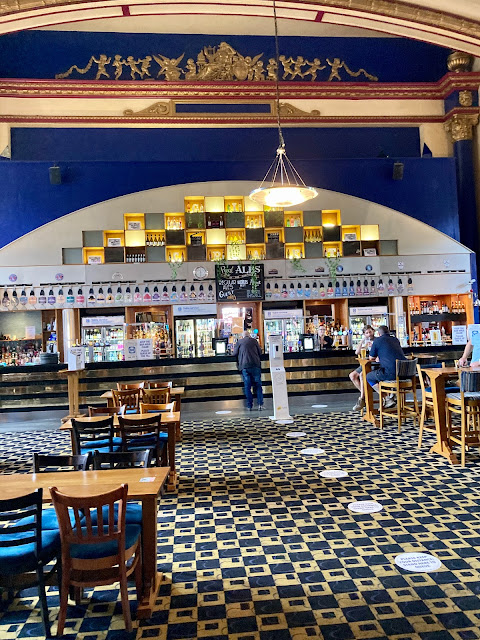 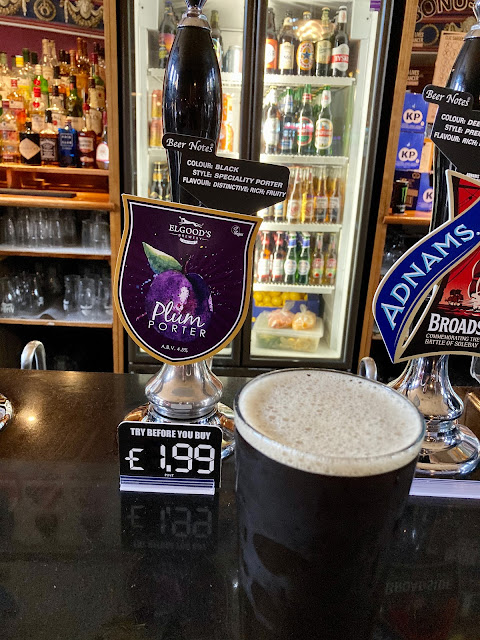 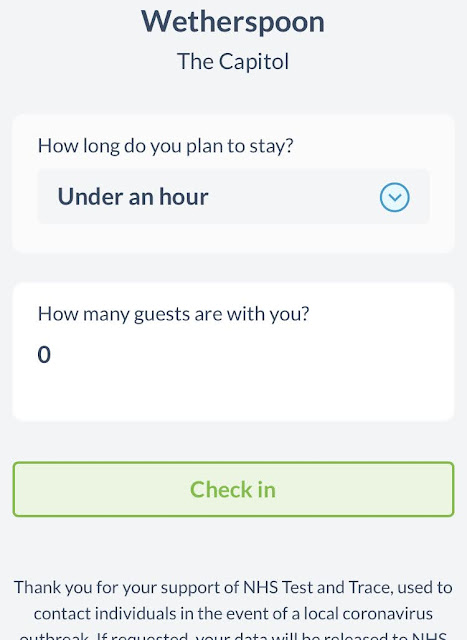 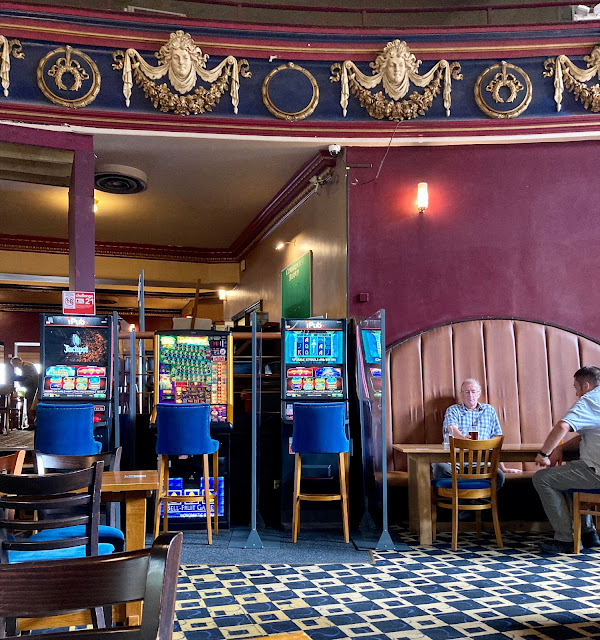 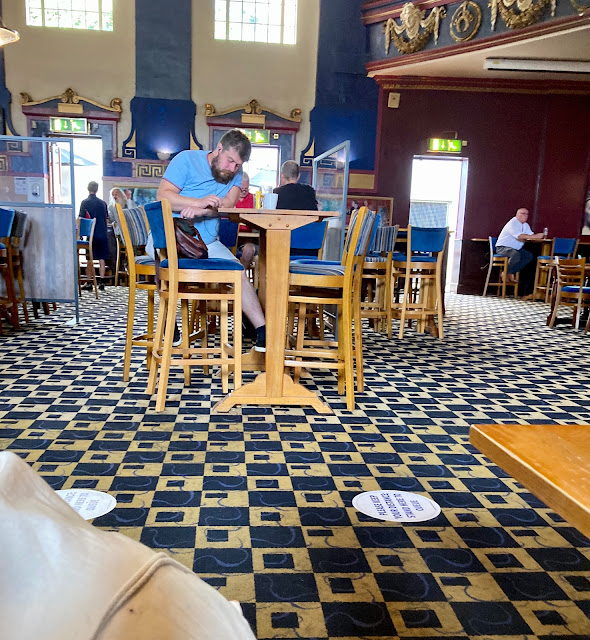 The other Forest Hill pub was nearer to Catford in truth, a good yomp down the A205 where at 12:17, a lady with a moustache smiled at me.  Significant as it was the first smile, and I'd been in town for just shy of an hour.

A few people contacted me to claim this next pub was actually in Catford (SE6) and I was wrong to say Forest Hill (SE23)...... 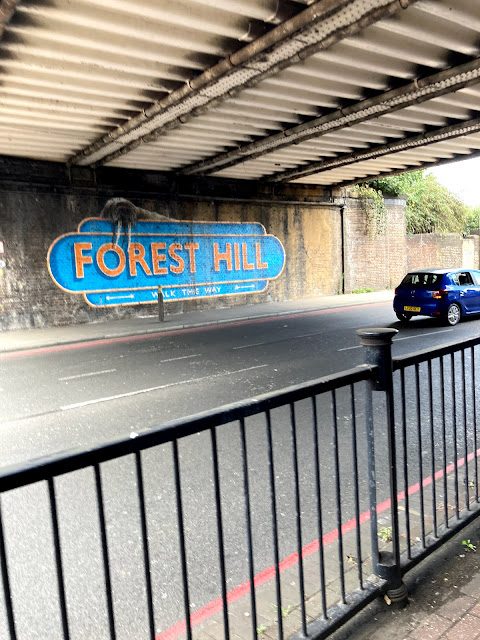 Still, postcodes don't lie, the GBG certainly doesn't lie, and far be it from me to contradict locals as some 'one time visiting Yorkshire upstart', but they are actually wrong as this red line shows. 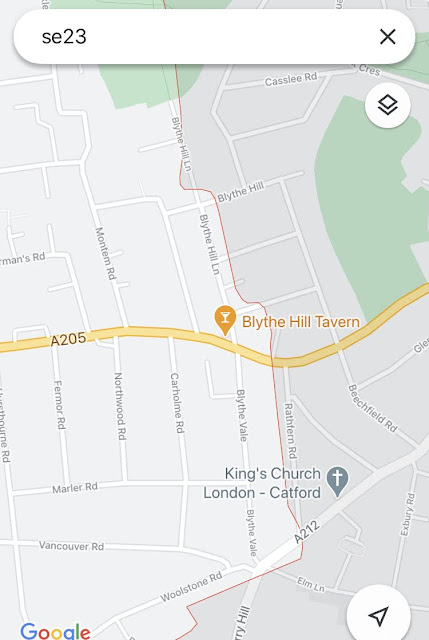 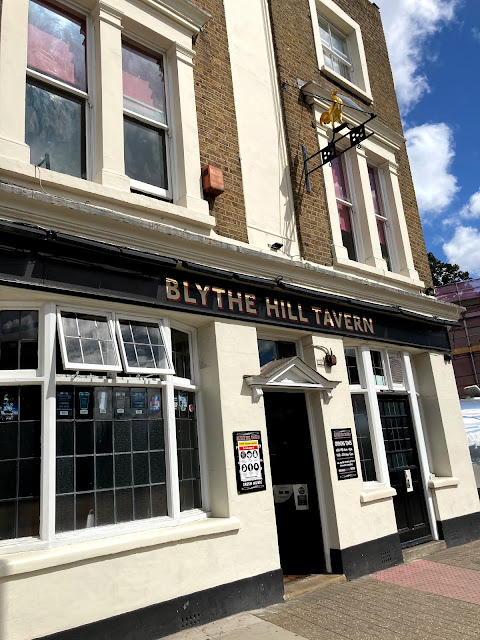 But when it comes to Blythe Hill Tavern, Forest Hill (1817) you cannot blame Catford for wanting to claim it for themselves.  Occasionally in this BRAPA game, you know within about three seconds of walking through the front door that you are in the presence of something special.  It was low-key and non-fussy, small and square, yet strangely perfect.  My overriding feeling as i waited to get served and said hello to the trio of locals was that pubs don't get better than this.  I remember it happening at the White House Hotel in Peel, the Elms Inn in Stapenhill and probably a fair few others, but I'm glad it isn't a common feeling because I'd hate to not be floored by that joyful leap from the pit of the stomach when unexpected pub genius is thrust upon you.  The young barman had a shirt and tie on, and was as engaging as you'd expect in these surroundings.  I paid cash and sat in the left hand corner, and soon the chatty local who reminded me of eco-warrior Dave Angel ('Moonlight Shadow') from the Fast Show asked me if I'd seen a programme called 'Camping' which was a bit like League of Gentlemen but the best thing he'd seen on TV all year.  "Look for it on your phone and watch it later, it's a little bit naughty but not too rude" he says, before explaining that he couldn't take his wife camping because she won't stay in a tent, but she'll stay in a box, whatever that meant!  The other two left, leaving me alone with D.A. but a chap with an Irish burr who was possibly the landlord came out and started chatting horse racing, though I admitted I had little to offer.  A trip to the loo took me through the bar!  You had to look left & right for fear of being run down, and after I'd pissed joyfully, I had to hurdle two huge bags full of sports gear some guy had left there, just to trip me up.  The back and side rooms were every bit as lovely as the front bar, with the added advantage of less traffic sound, presumably, but less natural light.  I couldn't get on with my Harvey's, which I chose because I'd enjoyed it in London Bridge last month, and although nothing wrong with the quality, it is just not one of those ales I always enjoy.  Was almost nice to have this leveller, because it a pub gets too close to perfect, I actually find myself feeling a bit disconcerted! 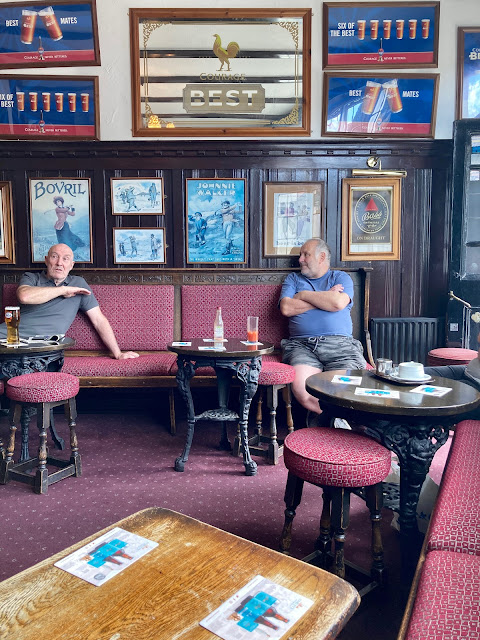 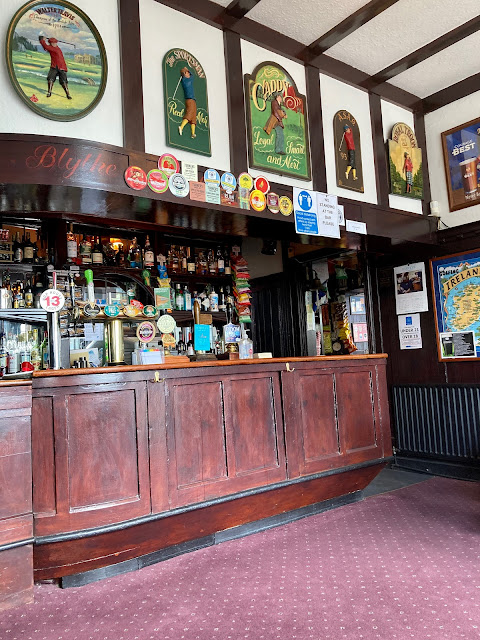 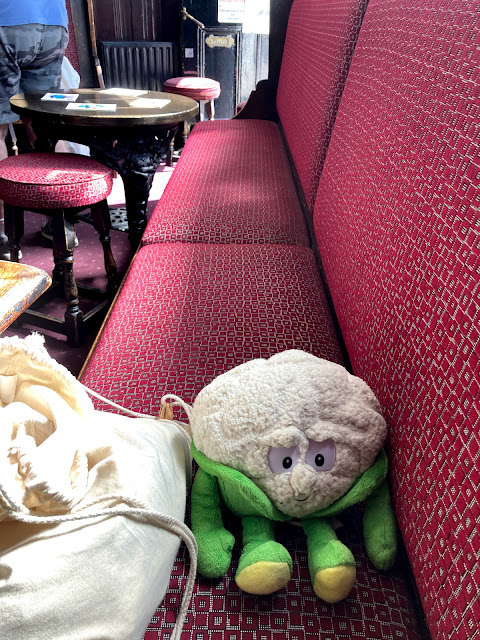 A short walk into SE6 and past both railway stations found the third pub suddenly looming over me, but not before a scary moment where I hid in a bus stop and a crazed man came screaming down the pavement.  I thought he had a knife at first, but it was a twig he was brandishing!  It sounds funny, but my heart was properly beating boom boom boom. 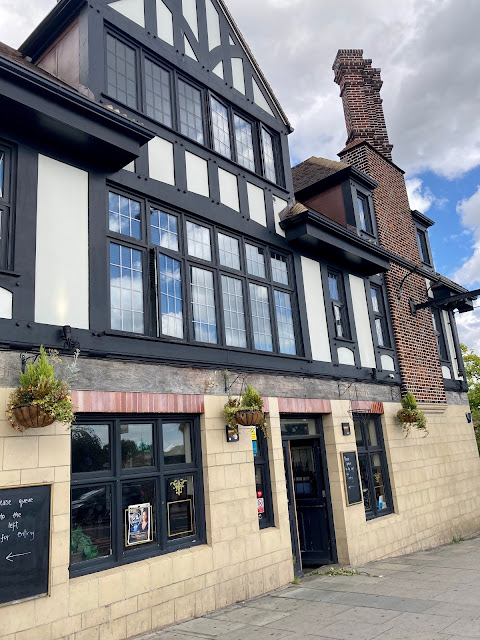 Any pub would struggle to follow the Blythe Hill Tavern, but regardless, there was something wholly unconvincing about the set up at Catford Bridge Tavern, Catford (1818).  I was asked to find myself a table, sit down at it, then come up to the bar, and order my drink, which I think I then ended up taking back to my table anyway, all in the shadow of 'floor arrows', a lot of perspex and a wordy blackboard.  The lack of cask didn't help.  Cellar broken due to the heat, I was told, though I s'pose I should admit this crafty Five Points Pale was a damn site more enjoyable than the Harvey's,..... fizz, chill and pricing woes aside!  I was told later £4.50 was good value for London.  It was the staff that made this experience ultimately a pleasant one after a slow start.   The lady said "hello lovely" and was lovely throughout, whilst the guy took a real shine to Colin, though telling me they had cauliflower on the menu within earshot of the poor mascot was a bit cruel.  Then he recommended a pub in Lee when we got onto BRAPA and I left with a smile on my face, just as I had at the previous pub, and all in all, isn't that what really matters?   Could it continue in the next three pubs?  Fat chance, I thought, as I headed back to Catford station where a bloke who reminded me of Theo Whitmore apologised for not socially distancing properly, but then made up for it by folding five tissues into a pack of mints and a bottle of water.  I think i like SE23/SE6!  I'll leave you with the CBT photos and we'll discuss Crofton Park, Brockley and Clerkenwell tomorrow if I have the energy. 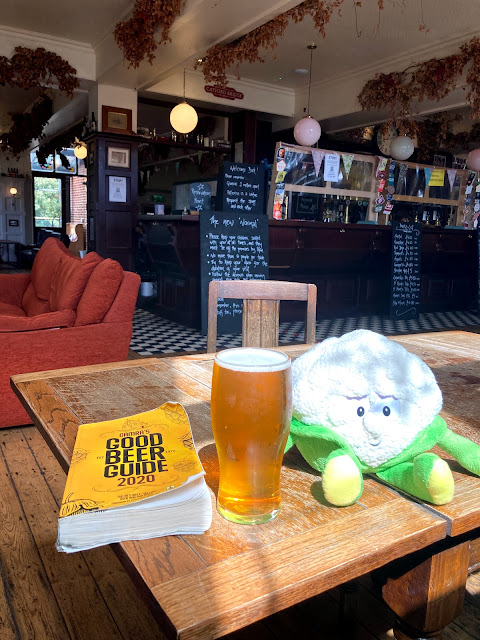 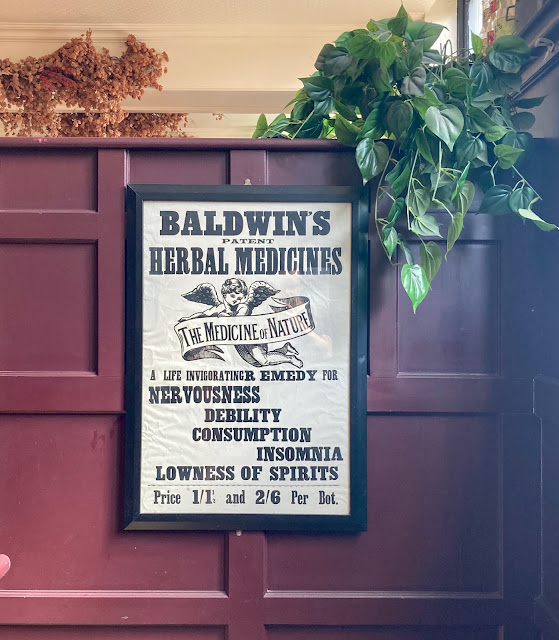