Sunday morning, my last of three days August Bank Holiday daaarn saaarf, as I look to make up some pub-ticking ground on those months lost circa mid March-early July, before the new GBG drops through my letter box in probably late October.

I had a little bit of a headache after yesterday's exploits in Kent, as I peered hazily up at the scoreboards in Waterloo station, about 10am, and was shocked to see there wasn't another train to Hampton Court for another 50 minutes!

Today's key aim was to get to one of my few remaining Surrey outliers, at East Molesey, with the hope of greening up a bit of West London whilst I was in the vicinity.  Anyway, time to think on my feet, a train to Teddington was due, and I could walk to one of my three 'Hamptons' from there.  Bingo.

It was a surprisingly long ride, and once there, I nipped into Tesco Metro for a bottle of water and a bag of Monster Munch, but a man was wailing in the doorway at his reflection, spoiling the posh Twickers vibe and upsetting a few Pashmummas and their daughters called Jessica and Floratio.
I crossed a road to overtake some 'outdoor masker students', but then they crossed as well and seemed hellbent in getting in my next BRAPA photo.  I waited patiently however, this pub looked like it was worth doing justice to ......
And it was matched by the interior too, the most gloriously real pub of the entire weekend's nineteen experiences.  Roebuck, Hampton Hill (1834) and if you haven't been and you like pubs, you will not be disappointed.  I'm greeted warmly by a hospitable, funny landlady, and there's even nervous smiles from the three old boys to the left who look certain to rattle the doms any minute.  One is drinking a bottle of Pedigree, one looks like Popeye and has a naturally downturned expression, but he is secretly enjoying himself, of that I'm certain.  Our hostess pulls me a pint of bubbly Eton Boatman, and the pub is so old school, it even had a £5 card limit.  She looks at me apologetically, but I wow her with my ability to pull a fiver out of my wallet that has probably been in there since March.  Free bar snacks are sitting there, a very 'Sunday lunchtime' thing to happen in the realest of pubs.  Some may baulk at the thought, in this so-called 'new normal' (ugh!) but tell me a person who can resist mini blocks of cheddar and tiny pickled onions on cocktails sticks, and I'll tell you they aren't actually human.  "That'll be extra!" roar a recently arrived couple of oldies, pointing accusingly at me as I swoop in for a cheeky P.O. treble.  I sit in the corner under the Indian chief surveying all.  I've been to some fabulous London pubs in August, but this one is right up there with the best. 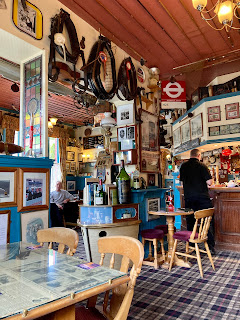 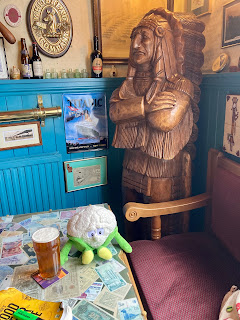 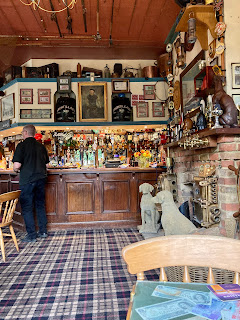 I turn left down this huge area of green called Bushy Park for a mile and a bit, and take the right fork very close to Hampton & Richmond Borough Football Club, who, if Hull City continue to drop, we might play in a few years.  In which case I'll probably regret having already done this pub, but no regrets at the time, this was my second favourite of my nineteen pubs this weekend.  I really was being spoiled this Sunday lunchtime! 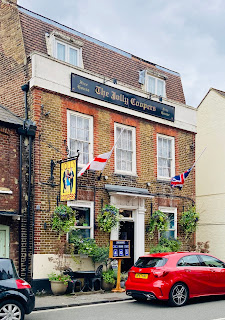 It didn't quite have the atmosphere to match the Roebuck, but don't get wrong, Jolly Coopers, Hampton (1835) is still a bona-fide gem.  Small, self-contained, very ornate horseshoe bar and the barmaid who greets me asks where I headed, which always gives me an excuse to start waxing lyrical on BRAPA.  She was top class throughout, very smiley, but could tell she wasn't feelin' the BRAPA dream so I desisted and 'stepped down' into some narrow bench seating to the right, the type that makes you glad you don't have a big fat ass.  A group of four oldsters and their dog D'Arcy asked me briefly about Colin, but it was clear they belonged to the 'north west' school of 'your mascot is weird' rather than the all embracing Pubmeister or Pauline Sharp approach.  It is becoming evident there is a north/south divide when it comes to the controversial Cauli.  I later heard them discussing the cooking of cauliflower , and when I shout over 'he's covering his ears!' they were just like 'arite mate, calm down'.  The pub improve infinitely when our brunette legend shuts the front door.  Now I know pubbers out there like my father like a through draft etc. but give me a muggy, warm, airless, dark, sticky pub atmosphere any day of the week!  A peculiar group of six young lads, so symptomatic of South/West London, did some OTT man-hugging in the main bar, and then chugged down a few pints of Morettti with vodka chasers around the corner.   But on the whole, this was another top pub.

Walking quicker than 99% of people occasionally leads to amusing moments as people sense you rapidly making ground on them, decide they want to let you pass, but want to look like they are finding an excuse to do so.
One of the best was on the way was on my walk to pub three, right opposite Hampton Court.  A lady, realising it would be best to let me pass her and cross the road in front of her, stopped at a tree, prodded at a loose piece of bark, said 'hmmm' and then carried on.
On a raise piece of road with Bushy Park on my left, and the Thames on my right, its a bit of a drag but not too far, and I cross the road again to see pub three in front of me ......

Well, as a wiser person than me once said, what goes up, must come down.  And after two rather fantastic pub experiences, well, we were always gonna crash down to earth with a bump.  In fairness to the Mute Swan, Hampton Court (1836) is directly opposite Hampton Court Palace, and I am here on August Bank Holiday Sunday circa 2pm, so it was always going to be busy.  That doesn't excuse surly staff and disorganisation though.  I'd fought my way quite effectively through the queue of ditherers, and when I made it clear I was here for a drink only, the noses turn upwards, I get the full-on leper treatment.  He asks me if I want to sit on the one remaining table for 4, but because I'm thoughtful, I tell him no cos a group of diners might want it.  You think he'd like that, but no, he just lazily points at a wall at the edge of the car park and says 'drinkers normally lean on that wall' like I should know! It's no better trying to get to the loos, one staircase for up, one for down.  Of course I get told off for doing it wrong, even though the down staircase is a black spiral one in the middle of a busy room of diners, impossible to see where it begins!  I return to the carpark wall, where I'd perhaps unwisely rested my drink and bag, and a car has just parked in 'my space' so a kind lady has luckily retrieved them for me so we have a little chat and I'm happier again.  I set a trend of sitting ON the wall, soon everyone is following (well, apart from kind lady who looks a bit arthritic).  A young man with peculiar turtle neck sweater and hair sneezes and says to old bloke and girlfriend/sister 'don't worry, I don't think its Corona' to which I chuckle and glance over, and he looks at me like I've shot him.  Southerners eh?  If this was the Cheshire Bastard Ring in Hyde, I'd be on the bar doing karaoke with them by now.   Ah well, as I said at the time, no wonder Henry VIII was such a grumpy sod with this for a local.  But it wasn't without its moments of humour, and I felt quite superior on MY wall.

So we'd reached the half way point of the day.  But I STILL hadn't got to the pub I needed.  Next stop Surrey.  Join me in our 6th and final part for what I'm sure will be another brilliant BRAPA read.
Si