Believe it or not, there was a point in my dark past than I was totally unaware of the Good Beer Guide's existence.

I knew I loved pubs.  That was a given since I was in the womb (which is like a warm micropub with more sociable opening hours, if you think about it), I knew I loved Hull City away days, so in the awkward period circa 1997-2001, Dad and I chose pubs based on 'how they looked from the outside'.

18th November 2000 was one such example of that, my only previous outing to Kettering for a grim 1st round FA Cup 0-0 in the rain on an open terrace. So forgive me for not remembering the pub name, it simply didn't seem important back then.  Cherry Tree?  Alexandra?  It certainly wasn't the one I visited today just after 11am ....... 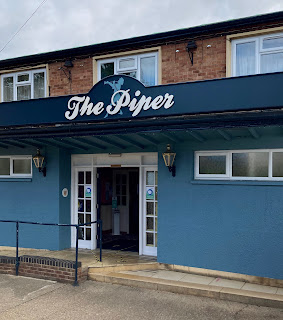 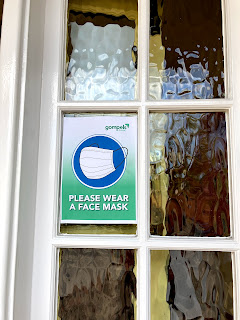 Because, quite ironically as it turns out, the Piper, Kettering (1858 / 3075) is exactly the kind of pub that wouldn't appeal to Si2000 from the outside, a flat roofed estatey effort in an off centre location.  If you didn't know, you'd probably expect it to be keg only.  Si2020 now knows that you can't judge a book by its cover.  Bonus point for the 11am opening, as the pub opens out into a cosy, warm traditional boozer with bench seating and carpet.  There's a smell of cooking and the sound of singing coming from the kitchen.  What a first pub to have to wear a facemask in!  The curmudgeonly guv'nor isn't here for my jovial mask and track n trace banter, and I later read he's a CAMRA member who has been here 29 years, maybe 30 now, so that might explain it.  I'm excited the new NHS Track & Trace App has worked first time, and when I go to show him, he tells me not to bother, he believes me.   "But ...but, that's not why I was showing you....." I say, but my voice trails off.  "You can take your mask off now!" he barks, jeez I'd only been sat down five seconds.  He brings me a good quality pint of Harvest Pale in a nicely worn away Castle Rock glass.  I ask if I can pay now so he has to go back for the reader, he glares one final time, and then disappears to join Mrs Piper in the kitchen.  I don't see him again.  Kettering folk had already seemed a grizzly bunch on my walk down, and Wellingborough wouldn't be much better!  Tough crowd in Northants today.  After that, I just settle into my pint and the gentle pubbub, the distant warblings of our hostess keep me entertained.  'Oh What a Night' / 'You Lost that Lovin' Feelin' / 'The Greatest Love of All'.  A fine medley.  Her Christmas album is on the way.  As I peer into the kitchen to say thanks and bye (neither see me), I spy that she is chopping broccoli.  Close shave for Colin. 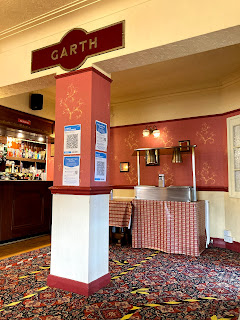 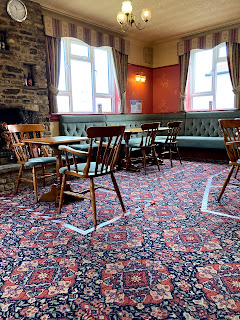 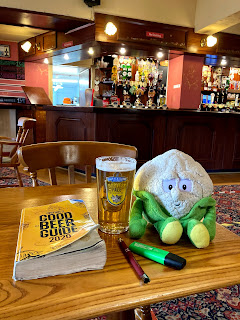 A lengthier than expected walk takes me into Kettering town centre.  In today's 'Kettering Highlight', I see a man with a six pack of Wotsits and a cabbage leaving Tesco Express.  So now you know what they eat.  Well played that man. 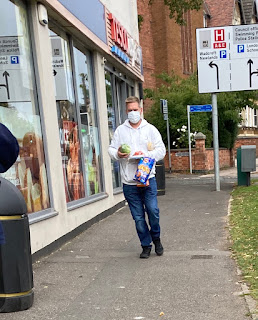 I've heard the other GBG tick in town, Three Cocks is still closed , they've cited 'vagueness of government guidelines / council restrictions' as the reason.  Okay then.  Oh well, despite the rain now teeming down, I go to have a look just in case ..... 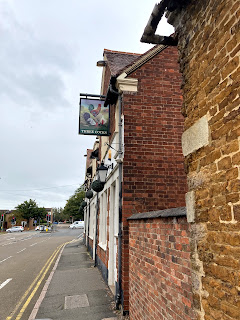 And a sign on the door confirms shut until further notice.  Strike it out of the 2020 Guide! (but if it reappears in the future, of course I'll need to go back to give it another go).
My other reason for making my way to the town centre is I'm looking for a taxi to take me to the village of Loddington, 3 miles west down a pavementless A road.  I find a taxi rank where a hefty dude under an awning shelters from the rain and says "if we are going in the same direction, we can share....."
I'm glad when he's never heard of Loddington, but he spends the next five minutes telling me how nice it was of him to offer me the opportunity, 'not many people wouldn't done!'  Alright mate, what do you want, a medal?  Bag of wotsits?  Cabbage?   (He doesn't once budge up to allow me to share the shelter).
Like buses, two taxis turn up at once and he heaves his overwrought damp frame into the first, and I get in the one behind.  Quite an effort to get the driver to know where I want to go, but to be fair, he's 100% on the route once we get going.  Been ages since a good taxi 'cheat', but I feel I deserve it.  Research told me the Loddington bus service was cancelled in 2018.
I tell him I'll only be 27.5 minutes if he can hang around (not keeping the meter running of course!) and he tries to argue it down to 20, so he obviously doesn't know BRAPA rules, so I argue it up to 25 and he reluctantly agrees.

Hare at Loddington. Loddington (1859 / 3076) and I hope you agree that when you get out to a rural pub with 'at' in the name, it can only mean one thing, and that is 'pretty, twee, gastro by numbers dining hole offering very little for the pub purist'.   But give 'em their due, I'm greeted by a fabulous friendly guy who (obscure cultural reference coming up.....) reminds me Robot Redford, the gold assistant of Grotbags on Rod Hull & Emu.   He directs me to a table in what might be the more 'pubby' area in that it isn't separate from the main bar and has a 'bottled Bass' sign, but to me, is just a shiny floor with a random pile of logs not doing much.  Quite well to do, the kind of pub where Colin wipes his bum before he sits on the table.   RR hands me over to the friendly Alice, wearing her mustard trousers like a boss.  She brings me a pint of something called 5C and my word, pint of the day right here and now.  Totally drinkable, top quality.  Well done the Lodd.  My only sight of a fellow customer is when an ancient man appears from the dining room to ask for his pepper pot changing as his one is stuck!  He hadn't put his mask on to conduct this upright exchange, so probably should've been tasered on the spot.  Never mind.  The Track n Trace biro ran out (was amazed this place was less electronic than the Piper) as the clock ticked down to the 25 minute mark, as I was reflecting on other pubs introducing 'at' into the title.  Cambridge Blue at Cambridge?  CoopersMegaLolzTav@GoodOle'BurtieBurts?  Don't sound as good do they?  Best not keep Mr Taxi waiting.  I say bye to RR & Alice, and it's back to the car park. 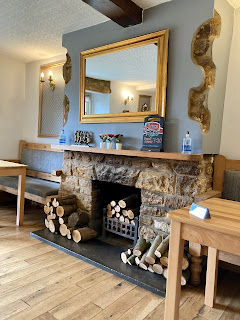 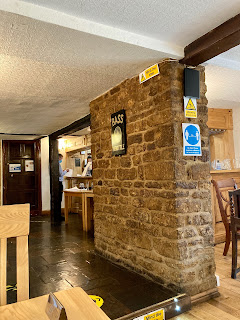 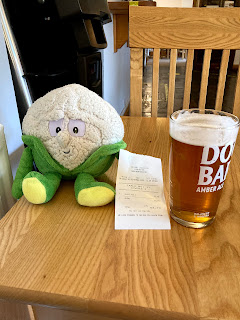 Bit of a shock back in the car park. Taxi is there, but no one is home!  I glance around, and in the time honoured tradition of when Martin Taylor drove me around rural Cambs, he is at the bottom of the garden inspecting an outbuilding (presumably for future micropub potential) surrounded by empty beer kegs!
Without another word, he runs the length of the carpark (I can hear the Chariots of Fire theme as he runs), grin on his face, and no word of explanation, gets in the car and drops me back off at the railway station.  What a guy.
I'm unlucky with my timing, and have a 50 minute wait for the next train.  What's more, the station is in disrepair so no waiting room.  It's a chilly wait.  My decision to wear shorts (every day since 24th April, didn't want to give in now) has already got me plenty of offended Kett glances, and with the wind and rain, I'm regretting it now!
When the train arrives, three scroats (scrotes if you are my Mum ...... I mean how she spells it, not that she is one) come and sit near me.  They sort of half know each other, half don't.  One is drinking Skol Super!  She doesn't want to share it.
OF COURSE this had to be the first time since 4th July I've witnessed a ticket inspector come down the train.   The two ladies buy tickets, but the bloke cannot even afford a £4 single.  She tells him its embarrassing and unfair on other customers.  He swears and gets aggressive.  Awful!
They get off at Wellingborough with me, walk straight into the road.  Cars beep, but they swear at the cars.  I lurk in the shadows, and finally they disappear!  Phew.  Decent trek into Wellingborough centre where my two GBG pubs are, but it has to be done.
I'll tell you about them (well one of them) and happier village times in part two on Wednesday.
Si