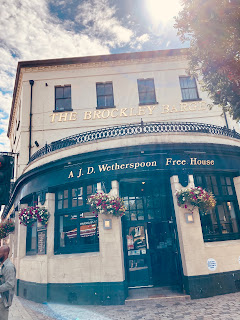 After my rubbish photo attempt outside today's other Wetherspoons, Capitol in Forest Hill, I made a slightly better fist of Brockley Barge, Brockley (pub 1819) which was probably such a nice looking 'Spoons because it was actually a former pub, which happens, but not often enough.  Once inside, I actually had to queue (something I struggle with, constantly peering around the person in front of me in case things could be getting done a bit quicker!) and just like in Capitol, I was actively urged to complete the Track & Trace.  Of all the 'Spoons I've been in since lockdown, this was the one I felt was adversely affected by the temporary perspex dividing screens, but that could just have been that I kept accidentally headbutting the one next to me, rattling it on a regular basis.  Colin, stupidly of him, thought the pub was called the Broccoli Barge even though he knew we were in Brockley.  Times like this I wish i could conveniently 'lose' him and replace him with Brian Broccoli.  The customers were a joyously pubby bunch and taking selfies with a cauliflower didn't seem uninkeeping with the gaggle of limping, toothless crocks and crones who could be found around every perspex screen.  Ale was good too, and whilst the pub lacked something of the pzazz of Capitol, it felt very GBG worthy.  Nice carpet too. 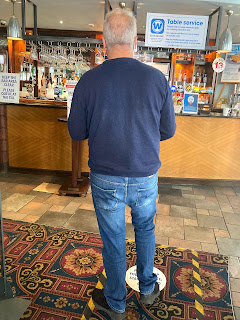 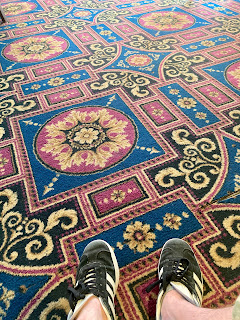 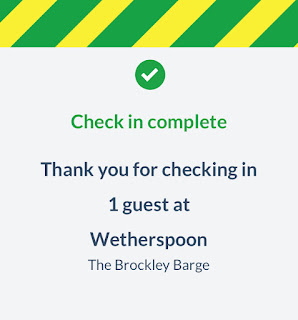 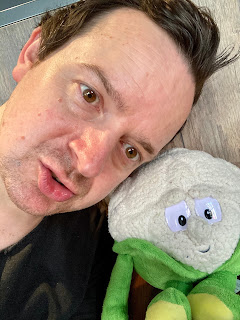 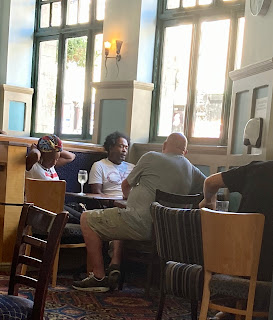 A twenty minute stagger down the road, yes I was feeling the beer by now, led me to a different part of SE4 called Crofton Park which I was just pleased to see open ....... 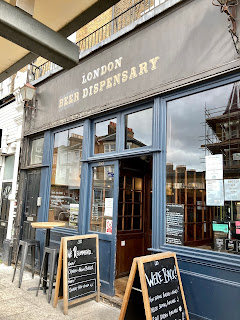 If the Good Beer Guide didn't control my every movement, it seems unlikely I'd ever choose to step inside London Beer Dispensary, Crofton Park (pub 1820) but as long as we don't try and compare it with the Blythe Hill Tavern, no reason why we can't take a modicum of pleasure from the experience.  After all, in a current environment where many bars of this ilk are merely offering takeout, if open at all, I was glad to be able to get the bona-fide 'tick'.  The friendly barmaid helps me work out what is on cask, and as my brain tends to do when confronted by incredibly crafty, serious beer loving backdrop, I asked for the most traditional brown bitter they had on.  This was by Southey, who own the place, and I found it a challenge to drink and murkier than predicted!  Also, the older I get, the more I find myself disliking those dimpled, handled jugs which I know many people prefer to actual pint glasses.   Every customer also seemed challenging and demanding, whether it was the Asian laptop guy who was talked through every can in the fridge, or Mr Mustard Dungarees and bucket hat buddy who preferred to drink on the move, than just find a table and sit down.  It was a long thin wooden place, though of all previous places I've been to, it most reminded me of the Bank in Willingham where Martin Taylor kindly drove me to one sunny evening in the past.  It took a bit of classic Whitney Houston and Gloria Estefan to help the beer go down, 'Eye of the Tiger' had me n Col do a bit of shadow boxing in the corner, and then I left, quickly remembering you can't take your glass back to the bar and say thanks bye in the current circs, which I think is one of the saddest things of pubbing at present. 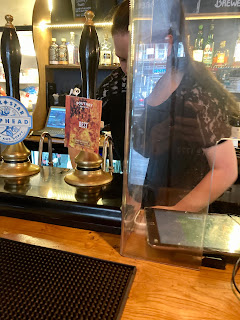 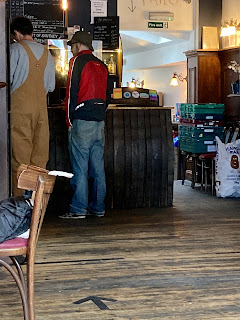 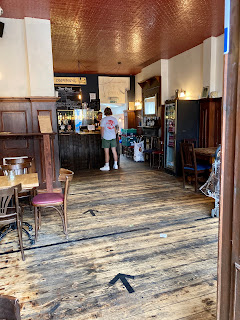 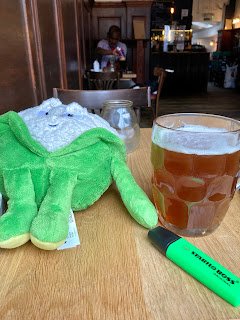 So Colin might've had it, but I told him Martin the Owl was strictly a six pint owl, so he'd have to gather himself for one final push at Denmark Hill, or is it Camberwell?

I'd made this same walk with Daddy BRAPA and Thomas G. Irvin on a cold dark rainy Saturday evening of 8th Dec 2018 when we went to the neighbouring Stormbird.  I remember peering across the road at this pub and contemplating it would be a good pre-emptive tick, only for Dad or Tom to suddenly double check train times, realise we'd miscalculated the whole thing, and we had to drink up and leave ASAP!

Today, it was a lot sunnier which was just as well as I'd end up outdoors ...... 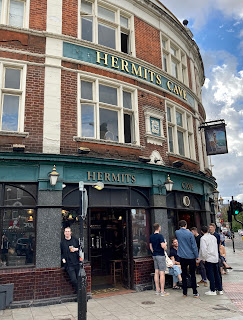 Nice curvy shape, inquisitive dude in black, and my first thought at Hermits Cave, Camberwell (1821) was how much more of a traditional boozer it was than the Stormbird over the road.  However, once in with drink in hand, I just didn't feel comfortable in there.  Round to the left felt too cut off from everyone else, and the main bar had so many folk coming and going through the big saloon doors, that you kind of felt in the way even if you sat down.  So I perched outside next to I.D.I.B. opposite some ladies who'd spied a guy they knew going into 'Falafel & Shawarma', and didn't it cause a mini furore, they'd certainly not been expecting him to do that?!  Oh yes, the drama was every bit of electric as I'm telling it.  Errrrm, back to Kings Cross?  Ah, go on then. 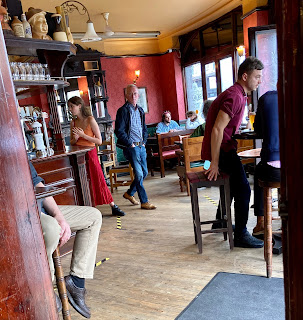 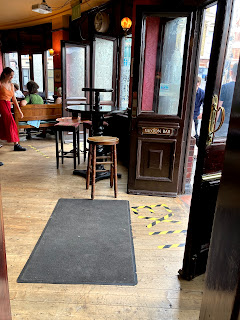 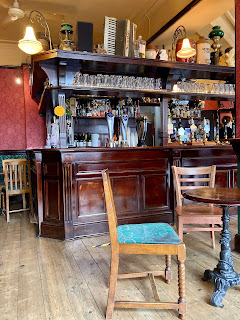 I nearly managed a 7th, as I found myself walking around Kennington for no reason half an hour later., had a wee, but decided against the ale on the basis I couldn't stomach it and thought I might do another 'Devonshire, Burton' so its still a tick that needs doing. 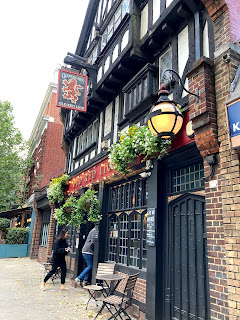 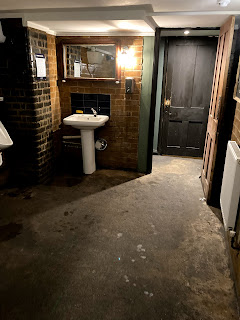 This is why most pub tickers are sensible enough to drink halves!  Oh well, 41 is still young, isn't it?

And plenty of pubs the following weekend as I'd be having a three day extravaganza down here to try and get some of those awkward Surrey ones ticked off I failed to do on my holiday.

Join me for the first part of that on Sunday evening, about 9pm.