I could tell as early as 11:59am that today was going to get messy.  True, no one was forcing me to drink so much, but like watching a car crash in slow motion, I didn't seem to be able to control the wheel.

I'd started the day bright, fresh faced, excited for my North Kent BRAPA debut, frolicking from York to Chatham via London like a frisky fawn ......

Less than twelve hours later, evil bitter beer had forced me into this state ....... 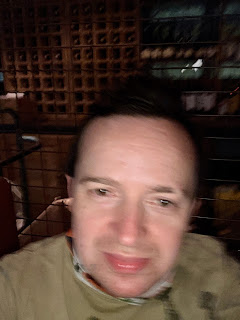 So how did it happen?  Well, let us relive the first four of nine pubs on what was my heaviest BRAPA day of 2020 so far.  That'd be an achievement, had I not been in one between March-July.

North Kent of course, was a blank canvas for me, so the pub options seemed limitless.  That was the first problem.  However, I decided to strategically avoid Gillingham in case I get to go there as a Hull City fan next season, Rainham's GBG entry seemed to be 'take out only' which wouldn't count under BRAPA rules, Brompton looked very closed, Rochester's Effin' Frog is getting refurbished, and I'd done two both the Man o' Kent and that Who'd a Thunk It? back in 2012.  Suddenly, not so limitless.

It was left to Chatham to save the day early doors, both entries open 10am.  Boom!

Some great bands, The Singing Loins and Billy Childish is from this part of the world, so at least I could get myself in the mood with some classic tunes .... 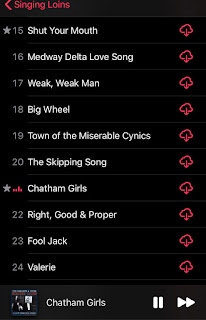 Once in Chatham, the locals had an interesting glint in their eyes, they moved their contorted bodies in strange Neanderthal ways, their jaws large, mouth smirking with dribble forming at each corner. I described them as a 'motivated bunch' on the day.

The local Wetherspoons lurched abruptly forward from the high street like a paedophile uncle emerging from a hedge by a primary school ..... 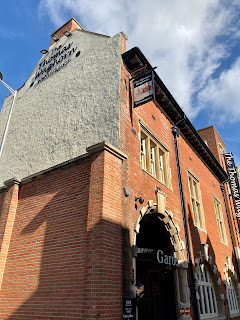 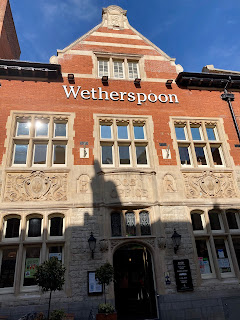 A grand old former post office, Thomas Waghorn, Chatham (1845 / 3062) is named after a chap who worked out it was a great idea to deliver post from Blighty to India via Egypt.  This was represented on the wall in the form of a rope, but it takes a great deal of imagination on my part to imagine this as a route across Egypt!  After a bit of queuing and track n tracing, the chirpy barmaid tells me I'm the first customer to order the Betty Stoggs today.  Already regretting it, I'm relieved when she tells me it has 'just' gone (errrm, what like last night?), so I go for the Wolf Mild, the first of many dark beers today.  She takes off the 50p discount before I'd even shown her a voucher, is that how CAMRA I look these days?  Not a fan of high stools because I like to keep my feet on the ground.  I enjoy this one because it is leather and spins around automatically, so if the locals are boring, I can at least pretend I'm the girl from the exorcist to pass the time.  They aren't boring of course, although a family in Gillingham shirts arrive for breakfast.  Do they know fans aren't allowed into grounds?  Saddos.  Wish I'd worn my Hull City one now, that'd shake things up.  Overall though, a gentle enough start, what could go wrong?


Just across the road, the other Chatham GBG entry can be found.  I like it when getting between pubs takes the littlest effort imaginable ........ 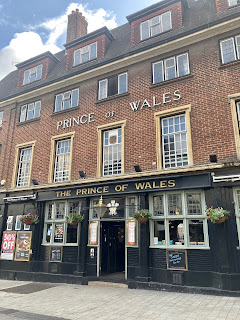 This was more 'Spoons than 'Spoons, Prince of Wales, Chatham (1846 / 3063) is probably a pub that won't please everyone, but for the pub purist, or the GBG ticker who is sick of the middly-twiddly dining dominance, it is a rare treat to come to fabulously unpretentious town centre boozer full of friendly old crocks.  There are more medical conditions than you could shake an MRI scan at, all presided over by hardworking staff determined to ensure even those 'passing through' will enjoy it.  It felt like I was St Helens, it felt like I was in Rugby, it didn't feel like I was in the South East.  Maybe Kent really will be a county that opens my eyes to pub ticking?   The Adnams Broadside is drinking well, too well, perhaps my beer selection today wasn't the most responsible with hindsight.  They sit me on a table reserved for 'Chris' from 12 noon, so they obviously aren't expecting me to stay for too long.  And who needs a book, newspaper or to bury their face in their phone when you can just beam your pearly whites around the room at all these lovely characters?  Colin feels right at home, most of them have similar shaped heads.  I get talking to this lady with a broken leg which she wants me to ask her about.  Her own fault she tells me.  She should've been taking tablets,  I think she said epilepsy, but if she does, she can't drink, and she wanted to drink ..... and the rest is history.  I make a sympathetic noise, laced with someone who needs the loo and is worried they might miss their train, so I say cheerio and head off into the Chatham daylight. 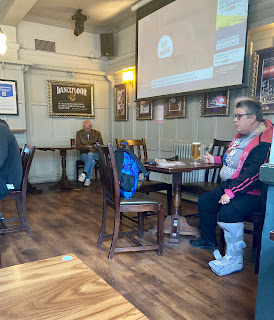 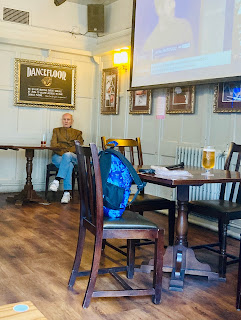 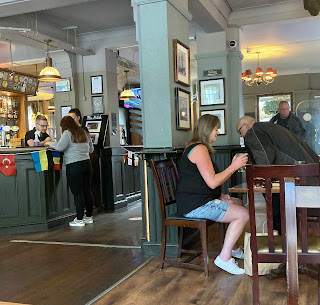 And I was!  One step closer to home, Rochester seems a pretty place in parts, well it has a castle.  I had to fight my way through towards my pub, an incident involving a fleet of ambulances had caused a lot of moronic gawping in the town, I felt like the only person not interested. 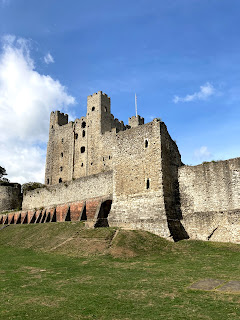 Past the castle and leaning on the wall opposite the pub at 11:55am, taking the obligatory photo and waiting for it to open, the late summer sun still beating down even as we hit mid September. 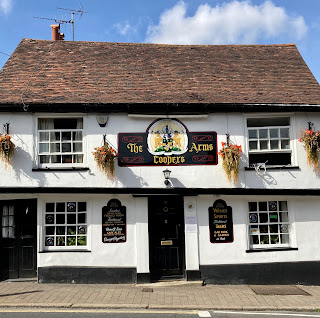 11:58am, and that happiest sound in the world as you hear the door being unbolted from within, a key jangles in the latch, and a centuries old door creaks open.  Magical.  I give it one extra minute 'to be polite' and 11:59am, I'm already in my third pub of the day.   Inside Coopers Arms, Rochester (1847 / 3064) the ancient atmosphere hits you with the full force of the supposed 1189-1199 era it was built, though they took their sweet ass time about making it a boozer, 1543, too late for Catherine Howard to get it ticked off (sorry but I always imagined her as the pub ticking type).  Personally, I would not let 'lack of a head' stop me from ticking the GBG.  The gaffer seems a good chap, he takes my temperature (luckily I'm cool as a Cauli at the moment), and not quite sure why I order a third dark beer but hey ho.  He tells me where the pub garden is, but why would I wanna sit out there when you've got this environment?  Well, I soon kind of realise as some intense drilling and knocking starts up!  I must look a bit startled, and the gaffer apologises.  Turns out his son is getting sockets put in his room.  They've had since 1189 to do this, just my luck it had to be today!  Luckily, it is pretty sporadic and I can still class this Coopers as a jolly one! (cos some pubs are called Jolly Coopers, sheesh, my humour is lost on you lot). 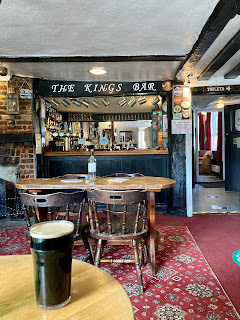 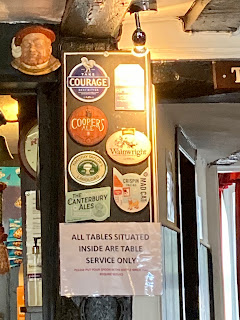 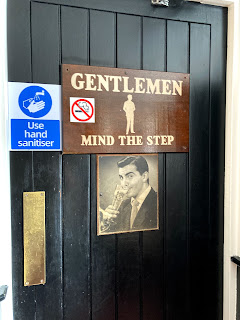 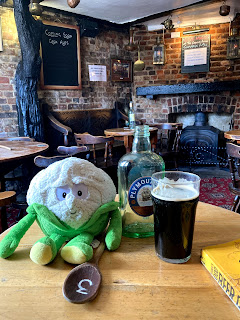 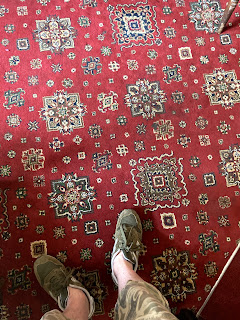 Another train stop in the right direction took me to Strood, as in the song 'Strood Lights' (lalalala) which you probably don't know but should.  Or the even better Christmas version 'Christmas Lights' including the amazing line "Walking through this town of Dickens, queuing up for a Christmas kicking".

A peculiar kind of place, it felt very end of the line in a Withernsea kind of way, and although there were main roads and a sort of centre, there was close to zero cars.

From Strood, I walked a good old yomp to a place called 'Upper Upnor' which had two whole GBG entries.  Google Maps took me quite a picturesque route, and locals had written motivational signs to encourage you that you were on the right track ......

I was seriously flagging anyway, and had to stop for a tropical Capri Sun, bit of tomato & feta quiche and a discount scotch egg on a bench.  Even three pints in, I could feel the Mild, Broadside and Stout weighing me down.  The heat wasn't helping.

I finally dragged myself through Upper Upnor and the first pub came into view, right on the banks of the Medway, today's second castle over to the right.  The pub looked a bit like an old fashioned hardware store i thought, or the sign did at least ..... 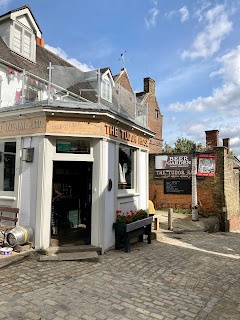 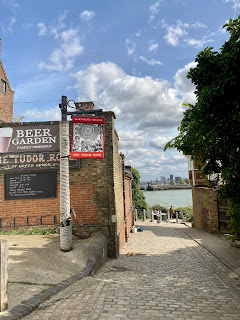 Tudor Rose, Upper Upnor (1848 / 3065) was actually from the 'Eat Drink Sleep' chain which always makes me think Work, Rest & Play.  A rich Mars Bar themed Shepherd Neame stout would've done nicely, but I simply had to make to with Spitfire, Master Brew or Whitstable Bay so I went with the latter, suddenly conscious of my 'struggling state', something light perhaps was a good idea now.  The interior felt airy, temporary, staff were functional, and a smattering of timid day trippers lurked around like mice who didn't know how to behave in a pub.  If it wasn't for the steep cobbled street down to the river, this pub would've made almost zero impression on me.  Dull.  Reminded me of the Old Coastguard in Mousehole, but with a more limited interior.  I was glad to get the main seat outside, though I had hesitated in case the large group of ladies wanted it, but incredibly, they sat indoors.  Here was my 'zombie' moment of the day, for I would gain a second wind, but here, I drank incredibly slowly, and was so still, a tame robin bobbed around my feet, eyeballing both Colin & the GBG, before hopping onto the seat next to me and judgily pouring scorn at my drinking speed.  So much so, I wondered if he was a reincarnated pub ticker of old.  Alan 'Wing'field?  The couple now sat opposite me were loving these red breasted shenanigans, it almost made the pub interesting. 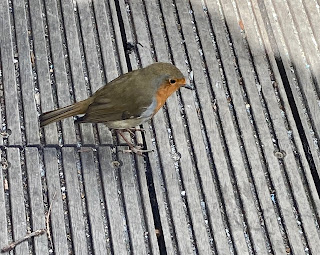 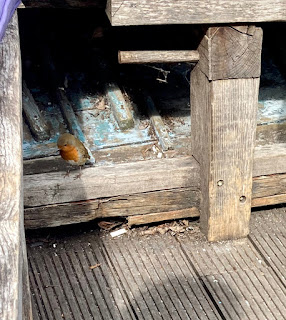 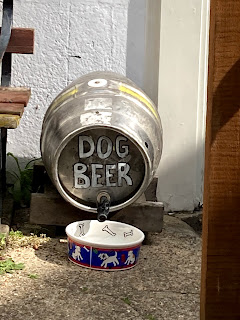 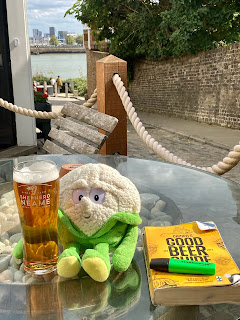 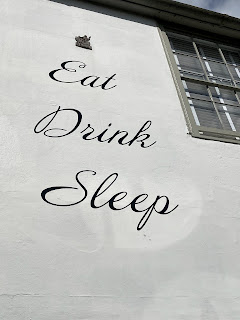 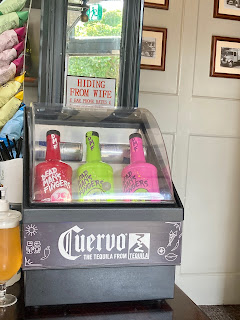 Time to drag myself from my slumber, and get to Upper Upnor's second pub.  I'll tell you about that tomorrow night, along with my continued descent into drunk oblivion.