An overnighter to County Durham might seem a bit excessive when you live in York, but then again, if they are gonna bung a 7:30pm opening club in the GBG, what choice does a boy have?

I had a thirst that needed some serious slaking by the time I finally made it through the doors of the first pub on Friday evening, it was one of those "your Dad drove you around rural Cumbria last week so we are going to make you suffer this entire weekend" moments of BRAPA karma.

The delayed train finally hit Durham over 30 minutes behind schedule, a 20 minute jaunt out to the
Travelodge, quick application of waterproof plasters (don't ask), quick turnaround, and off to Durham bus station where I bonded with a bereft ruddy cheeked crone over the inability of the X21 bus to actually turn up at all!  I nearly tried a 'Pity Me' gag but thought best not!  The non X'd 21 bailed us out and soon I was in the warm bowels of Chester-le-Street.

Furthermore, the first of three pubs I required was barely in C-le-St at all, actually residing in the rural outpost of Castle Dene, a good 30 minute stretch from the centre.

In pitch black conditions, the pavement ran out by the golf club with full headlit cars bombing down the Lumley New Road, I needed to know if the pavement carried on across the road - otherwise, I was going to turn back, beaten.

Problem was, I couldn't tell, so I sheltered in the bus shelter (I guess that is what they are for) and Google Maps Streetview confirmed there was indeed a pavement, so I jumped into the darkness and tentatively carried on the walk up through Castle Dene.

Up a country lane, the pub finally came into view.  Well, you can imagine my relief!


So all things considered, I feel that I deserved a better reception than the mardy faced 'welcome' offered to me by the barmaid, probably the only person in the entire Smiths Arms, Castle Dene, Chester-le-Street (1698 / 2915) who wasn't wearing a huge grin or laughing with a jovial County Durham warmth.  Not wanting to linger too long at a busy narrow bar with my rucksack, I chose one of the first ales I could see, Rudgate Ruby Mild.  She looked doubtful and then said "no, the closest one is Cameron's Strongarm" indicating the pump at by her right arm.  Now, surely she meant 'the Ruby Mild is off but the Strongarm is similar in style and colour' but it could've been translated as 'I can't be bothered to move too far so I'm gonna pull the beer that is closest to me!'  Almost certainly paranoid, I then span around to take a delightful photo of sleeping dogs on the bench seating only for a man to say to their owner "How precious are you about your dogs?"  Was he thinking I was planning a heist?  No offence, but they were hardly top breed hounds more mangy mutts, even this cat lover could see that.  One came for a cuddle later, even nuzzling my GBG.  If all dogs were this gorgeous, I could be converted.  Features wise, this pub was a cracker.  Haunted too! I sat towards the quieter back bar, but behind the screens was a dartboard and three gents really got into the 'spirit' of it, and I mean REALLY.  "NOOOO, HAHAHA, OOOOO, WE ARE GETTING CLOSER & CLOSER" was all I could hear from behind the screen.  A few canny folk nodded and smiled slightly, but this felt very much a local pub for local people and I left through the deserted right hand room after a quick tinkle, a good one ticked off.

I wasn't looking forward to repeating that walk back into Chester-le-Street (imagine asking that barmaid to order a taxi for you, jeez?!) but it had to be done and at least I located the torch on my phone, and knowing what I was doing, shaved about five minutes off the journey.

But the difficult night continued with news that another required GBG tick, Wicket Gate, a Wetherspoons, is being refurbished and is closed until April! 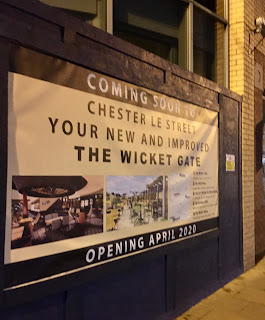 I learned the next day it is quite an old 'Spoons for the area and has been neglected for too long, and what with time being against me since the difficult start to the night, not being able to get into the 'Spoons probably wasn't the worst thing that could've happened.

I'll be back if it makes a future GBG edition, which I'm sure it will.  For now, I turned a corner where a bouncer was telling a pizza delivery man that "he gave it to her" in a Northern Irish accent which I didn't stop to question, because the main pub (club) of the night was looming out of the darkness like your Uncle Willie on Hallowe'en Night 1992 ....... 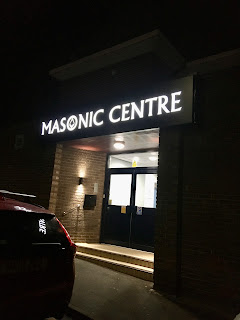 Masons?  Pressing buzzers and declaring your CAMRA bent to get yerself inside?   I was nervous and hovered around outside, painfully aware a taxi driver was watching my amazing photography attempts above.  Luckily, the first of several portly squat men in suits and yellow ties who I'd encounter here was just leaving, and let me in, no questions ask,though I raised a trouser leg slightly in the hope it'd help.  Masonic Centre, Chester-le-Street (1699 / 2916) though surprised me by opening up into a bright and welcoming long club room, folk on all sides saying 'hello' as I ran the gauntlet to the bar, prints of bright blooming flowers on the walls creating a peaceful scene at odds with my half-baked Masonic stereotypes.  The barmaid was the polar opposite of our Smiths miseryguts, enthusiastically welcoming me into the fold with much chatter with a local about these two ales from Billingham, Sticky Toffee (I got a taster thrust upon me, you know what I generally think of asking for tasters in pubs!) and this Slug Porter apparently named after the brewers wife (he's brave!) which I went for cos a bit less sweet.  I got a BRAPA mention in, she seemed impressed, then she told me the Black Sheep Monty Python Holy Grail was selling best, I said I wondered if Terry Jones' death had brought it into the forefronts of people's minds again, and they looked at me with an air of reverence I never normally get!  She told me to sit down and enjoy mi' ale in peace, which I did, conscious of a darkened door to the left of the bar where the suited Masons kept disappearing to.  One did a weird sticking out tongue gesture at me (Mason code?), I just said "hi mate" and he looked put out, but I was worried we'd have snogged otherwise!  I needed a poo too, but wasn't brave enough, a woman slagged off men in leather trousers which seemed unnecessary, but on the whole, a fantastic deserved debut GBG entry. 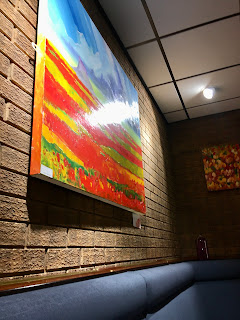 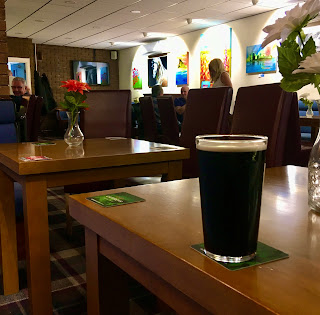 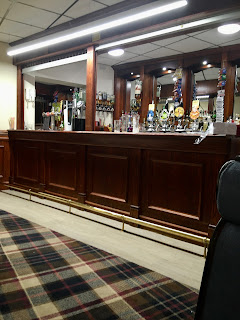 I staggered around the corner to the bus stop, opposite the fabulously rockin' Lambton Arms where a band were doing a quite punk cover of 'Rockin' All Over the World' to finish their set.   Three old dears stumbled across the street, panicking about the bus they then didn't get on.

As pleased as I was that the Wicket Gate closure  had me on the 22:23 bus out of Chester-le-Street rather than something after that scary Friday night witching hour of 23:00, I was conscious that only two ticks tonight wasn't a great outcome when I'm still trying to make up lost ground from the dreadful first week or two of January.

Luckily, my bus went through this place called Framwellgate Moor (or 'Fram' to the locals) where one of my two remaining Durham pubs was situated.  I had to risk last orders having been rung and chance my arm on this one, 'twas almost 22:40 when I arrived .......


I went 'left' as is current BRAPA policy, it had served me quite well at the Smiths Arms as that is where the action was and it was definitely the right decision at Tap & Spile, Framwellgate Moor, Durham (1700 / 2917) and you know when you step inside a pub, and know within seconds it is an instant classic?  Well, this was one of those.  A booze soaked smell was the first thing to hit me, and a warm atmosphere kind of rough around the edges, reminding me a bit of Maltings in York but with history and a bit more depth which I discovered as I wound my way though the back rooms towards the bogs.  I was on a Kirkstall Stout having a taste for the darks by now, the staff were attentive even at this late hour, and the last orders bell sounded about five minutes after I arrived so I'd done well.  I made no notes here, just generally basking in the hubbub and telling anyone who'd listen to me that this might be one of the best pubs I'd ever visited.  A drunk man in the bogs was most responsive, told me off for not coming here before, but has he done the Bedford Arms in Souldrop or the Hare & Hounds in Waytown?  No,well zip it!  That'd be my comeback anyway if he hadn't been mildly terrifying.  A couple were laughing at my sense of wonder when 'time at the bar' was called at about 22:50.  This pub wasn't messing about with its 23:00 closure just cos it's Friday!  A moody man had just run to the bar and perched with two pints of lager, which he now had no intention of rushing.  Ideally, I'd stay here til just before the 23:33 bus but with tables and chairs being chucked about the place and surfaces being cleaned, I realised this wouldn't be possible.  Our drunken toilet friend left but gave me a brief hug, pointed at a lady at the bar, and growled "Lesley, owner .... she ..... she ..... good .... no ..... SHE KNOWS .... ugggghhh .... yesss mate" before he was dragged off by his friends.  What did he mean?  Lesley later said "they are not drinking their Chinese in here!"  Nothing made sense anymore, but I knew that with the exception of 'two pints of lager and a chip on his shoulder' bloke, they wanted me and everyone out, 'twas 23:06, and in a way it was a great ..... a magical pub that left me wanting more! 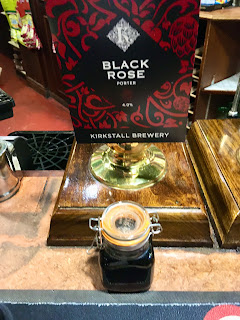 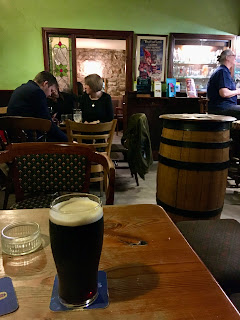 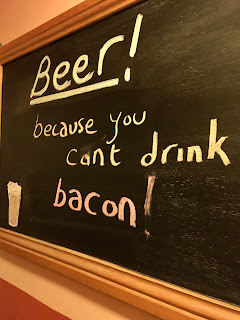 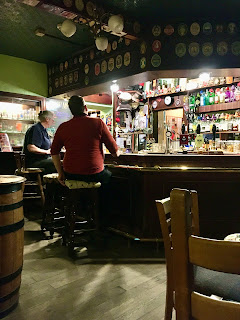 But buggered if I was standing in the cold 26 minutes for a bus with the other drunks, so I started marching back towards Durham to continue my ridiculous amount of walking for the weekend.  Wasn't too bad really, and back at my Travelodge for a well earned cuppa and bag of snax to get me through til breakfast time.  I needed six pubs on the Saturday, and I had Consett in mind.