In my haste to get a record number of BRAPA pubs for the year (448), I'd been really pushing West Yorkshire the previous week with trips to Oakworth (Tuesday), Pudsey (Wednesday) and South Elmsall (Thursday) to bolster my chances.

And after my day in Penrith, I was up to 442 with one Saturday left. I was sure I was going to do it by now, but now I wanted to finish West Yorkshire before the end of 2019 and this looked my best opportunity.

It wasn't an easy one.  High in the hills a mile or two outside Hebden Bridge in the village of Wadsworth according to the GBG, but Lane Ends, Chiserley and Old Town are probably the names of the places the GBG will list it under in the coming three years!

Being a Monday night this close to Christmas, I was paranoid about it being shut, but I checked in about three different places and it seemed like it was all systems go.

I finished work late for the pub didn't open til 6pm and I didn't want to be hanging about, the wind was bitter as I waited alone in the dark at an unlikely station bus stop til a tiny rust bucket finally appeared.

The driver had a Santa hat and tinsel draped around his area (not like that!) but looked thoroughly fed up.  A round faced owl of a girl asked me if she could get to Luddendenfoot from here.  I looked at her helplessly.  A woman with a wicked smirk stood side on from me, and cackled when the bus appeared.  A simple looking man in a badly fitting beanie hat made a moaning noise.

Up tight narrow lanes, around gravity defying bends, we climbed and climbed and climbed.  The bus barely had enough power to get up the hills.  He waited for a car to pass, but a white van man overtook us through the gap, the driver angrily honked his horn, the witch cackled, beanie man groaned more loudly, and owl-face hooted a haunting tune evoking memories of the Mytholmroyd floodings.

I was first to press the bell.  Google Maps claimed we'd stop half way down Nook Lane, but in reality, he sensibly stopped right outside the pub on the junction of Nook & Popples (just in case you are planning a journey and get confused!)  This felt remote.  Relief to see pub all lit up and open. 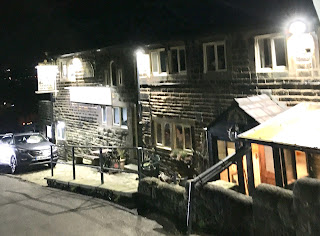 Hare & Hounds, Wadsworth (1671 / 2888) was actually a Timmy Taylor pub, and I always feel reassured when I see the full range of their ales.  It was half atmospheric, horse brassy, roaring fire cosiness, and half quite high-class foodie venue.  It had enough space to make it quite enjoyable.  I asked the barmaid (resplendent in dinosaur dungarees, a new one for the BRAPA wardrobe perhaps?) how she was, and she seemed genuinely pleased and surprised!  I guess most visitors first words are 'do we need to book a table?'  I'm not saying I'm a better pub goer than 99% of the population, but I definitely am.  As I settled on a heated pile-inducing radiator seat opposite a Christmas tree and fire, with a great pint of Crimson Comet, it finally did feel like the last pub before Christmas, despite a loud lady making an announcement to the contrary.  Our barmaidly hero then started setting tables for the 7pm influx of diners whilst a dog was attached to her waist on a lead, and sang an overly elaborate Bob Dylan song word perfect (her, not the dog).  Music like Born Slippy and Don McLean's Vincent followed, I peered through the window pane and imagined how great the views down into Hebden Bridge would be on a summer's day.  A local who sounded like all of the members of the Beatles in a blender started playing Devil's Advocate, asking the barmaid what she was planning to do with her Media Studies degree.  "I've no intention of pursuing it, I just wanted to go to Uni".  This was so like my experience, I had to smile.  She concluded she wanted to open a dog kennels.  The local wasn't gonna win.  As the first few dining families started to arrive, I left, happy, but nervous re the bus turning up.


But despite a 10 minute delay, the bus did finally chug around the corner, I leapt into the road waving a big comedy thumb so he just had to stop.  The delay meant I didn't make my connecting train but the next one wasn't too far off.   Typical.  But West Yorkshire done!

After a nice couple of Christmassy days with the BRAPA family, it was time for some much needed fresh air and stretch of the legs.  Hull City had a home game and, on the suggestion of our football friend and one of BRAPA's leading contributors over the past five years, Christine, we paid our Humber Bridge toll and ventured into the feared land of North Lincolnshire, or South Humberside if you want to upset everyone.   It might even be North East Lincolnshire, you can never tell.

What with the push to get my record number of pubs done by 31st, I was never going to (let Dad) pass up the chance to get a bonus tick in.

I didn't actually know South Ferriby was a place until I heard this pub was prime GBG 2020 material.  Everyone has (probably) heard of the more illustrious North Ferriby, who until recently had a really good non league football team who I was worried were going to get better than the Taaargers.

As for East and West Ferriby, they are a bit like Atlantis.  But in a River Humber way.

The pub was actually right down on the river so you could wave at Hull if you really wanted, and I was like a clothes horse sporting everything I'd been bought for Christmas ......

Hope & Anchor, South Ferriby (1672 / 2889) was, to all intents and purposes, quite a posh dining pub, but the front bar remained separate for drinkers from the elaborate fish tanked back of the pub.  In many ways, it was quite like another Hope & Anchor, on the other side at Blacktoft, which I haven't seen in the GBG for ages, but enjoyed probably slightly more than this one.  I ordered a Christmas Aussie themed ale, which I'll claim was BRAPA's attempt at solidarity with my cousin and other bush fire victims, but at the time was due to a surfing Santa that looked funny and Neighbours being the best soap on TV.   'Twas almost more Werribee than Ferriby (Haha).  The staff were good, raised half an eyebrow when we said we were only here for drinks, and then a posh couple who hadn't booked (bear in mind this is a Michelin pub) got shoehorned into our main bar where they waxed lyrical about cockles and mussels alive, alive-oh.  Something of a relief then when our friends arrived, and the whole Andrew family was here!  As well as Christine, we had Ben who regular readers will recognise from certain Hull City away days, and the Scunthorpe Utd supporting Dad/Daughter duo of Colin and Lizzy.  Turns out Scunny had a home game too.  So could you swim from Hull to the pub?  That was my burning question.  Lizzy said you'd have to wade / walk, and local 'legends' like Peter Levy (I use the term fairly loosely) had done just that.  Privileged to be sitting next to Christine as it was she who penned the GBG 2020 write up for this pub.  Words like 'confluence'  set her apart from most GBG scribes who rarely tackle three syllables (BRAPA fact).  We then wandered around the back in a Blacktoft / Barrow Haven kind of way to admire the views - Birds Flying in Formation 1-0 Cement Works.


The Hull City contingent then went to another GBG newbie, Hull's excellent White Hart though it was a bit chilly and struggled to hit the form that got it into the Good Book which I've witnessed on my previous two or three visits.

Hull City also struggled to hit their recent form, a woeful performance and 0-2 defeat to an equally woeful time-wastery 'getting our own back for the match at the City Ground' Nottingham Forest.  With Scunny losing 0-2 v Walsall, I think we'll just have to blame the Hope & Anchor for being an unlucky pub!

Join me Wednesday for tales of my final trip out of 2019 in County Durham.