BRAPA AND THE WEAPONS OF CHRIST-MASS DESTRUCTION : COUNTY DURHAM

"Do you want to be George W. Bush or Tony Blair?" I asked Dad, as we arrived in Sedgefield on the final Saturday in 2019.

It might have sounded a weird question, but I'd read that back in 2003, these two chumps had fish & chips in this very pub we were due to visit.  And an impromptu BRAPA role play always brightens the day!

Dad told me it wasn't the most brilliant choice he'd been presented with in his near 73 years on the planet, but he opted for Bush.  "Ohhhh, I wanted to be him!" I whined.  So I set my grin to square and forced my eyes to 'soul has departed', and waved my hands around frantically.  That should work.

In truth of course, I'm probably more Dr David Kelly.  A scapegoat for more shadowy pub tickers, refuting claims that every pub on the Isle of Man can be ticked off within 45 minutes, searching in vain for the Railway Station Hotel in Port St Mary which doesn't actually exist. 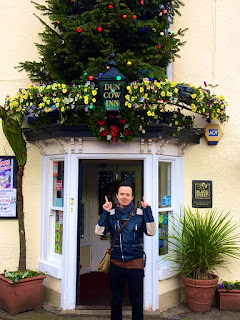 Hard to know whether the Dun Cow, Sedgefield (1673 / 2890) was always quite this OTT posh dining Santa's grotto of a pub, £4.50 for a pint of Stallion for heaven's sake, or whether the Bush / Blair moment had it believing it's own hype?  After all, my impression of County Durham and especially a town like this would be pretty working class.  After all, I lived with a guy at Uni from Sedgefield for a year and he was the stodgiest gadgie you could hope to meet - I don't think he displayed one personality trait in the entire time.  Having said all this, it was impossible not to like the pub.  Quality throughout.  This was due in no small part to an army of incredible helpful, polite and friendly staff.  The barmaid was pulling a pint for the first time with ours, and at these prices, well let's just say for once I was pretty strict in demanding a 'full pint measure'.  Dad, like a lad who'd been on the gear all night, was reaching for the smuggled Mini Cheddars the second we sat down.  For all his faults, Bush never behaved like this!  No time for Fish n Chips, I had a war to win.


Yes, I was a magical three pubs away from achieving my record number of BRAPA pubs in the year.  But I was still nervous, buses so infrequent around here, I mooted the prospect of an 'early' taxi to get us 'back on track' and 'take the pressure off' as I 'felt the weight of the world on my shoulders.  They were soundbites Blair would be proud of, but they worked on Bush, I mean Dad (I'll stop this now).

So a jolly bloke with a voice that didn't carry enough for such a big vehicle took us to the almost neighbouring but still too far away village of Bishop Middleham for pub two. 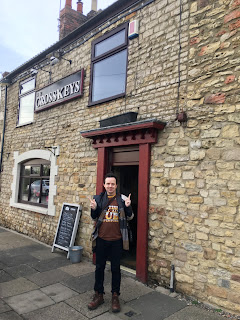 Today's first three pubs would be my three favourites, and Cross Keys, Bishop Middleham (1674 / 2891) had a wonderfully cosy old skool air, one of those where you are welcomed into the ample bosom of the community, even if we were about the only people in.  A Sooty collection box always means a proper pub.  Dad got on some strategically high backed curved chairs for sausage roll and tomato smuggling, he was really on it food-wise today!  The toilets smelt of Bovril, and you don't get that in Surrey.  They had Laurel and Hardy pictures too.  It is amazing, apart from perhaps Dick Turpin and the ghost of the ghost of Derek Acorah, how many pubs and towns claim to have a Laurel and Hardy link, was this another?   I returned to find Dad with a profound sadness on his face, brought about by Pink singing Beautiful Trauma at a thousand decibels.  'Twas a very atmospheric pub otherwise but I've noticed County Durham loves its piped music more than most.   The Double Maxim is a 'must drink' ale up here, and it was great (though I think the Stallion in Dun Cow had been better kept)  Good pub, and back on track by a full hour, we could saunter for the bus to Ferryhill and chill.

Of course the bus had to be a bit delayed.  But it was only ten minutes or so to our nearest stop, actually a nice looking pub called the Eldon which was full of very scroaty looking folk ..... 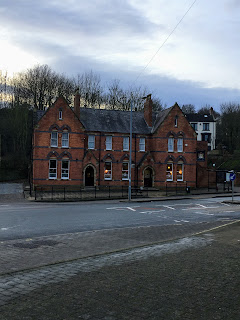 Which we gave a swerve (bit of  shame really!) and carried on down the road to my record equalling 487th pub of the year, hopefully.

'Looks shut!' exclaimed the fatherly one, who does this 'closed pub' schtick at least once a pub day.  'Noooooo!' replied BRAPA.  I demanded the outdoor photo before we even discovered the truth .......


But as we turned the corner, around this deceptively large interestingly shaped pub, lights appeared AND a door was ajar.  Thank absolute heaven's for that, my heart was beating at a rate of knots!  And is it was, Surtees Arms, Ferryhill Station (1675 / 2892) would turn out to be both of our pubs of day.  Cowabunga, party on, and all that turtley jazz.  Yes, brewpubs are often soulless, scientific, metal, cold slabs of places so it was great to go into a cosy traditional one (the year 1872 when you are expecting 2012 is a decent outcome!) to sample the lovely Yard of Ale 'Puddin's Up (gotta get a Porter when you can ain't ya?).  I'd only seen Yard of Ale in a place called Aycliffe Village leaning on a tree in the sun back in 2014 after a moody woman in Coatham Mundeville got cross with me for saying their beer was off (hasn't been in GBG since, ha!)  The main difference here though was the owner, Alan, and as the only customer's for the majority, he was only too happy to chat with us on local pubs, ales and even do the record equaling green ticking (he even had to go 'over the page' so it was a more perilous tick than you'd want to give to a newcomer, but he handled it splendidly with minimal fuss.  Take note Sidcup).

Halfway through the day, three pubs I'd enjoyed.  No transport mishaps or gaps in memory.  This couldn't last surely?  Join me in part two tomorrow where it'll all unravel in true BRAPA style.