BRAPA ..... GETS TO THE GILCRUX OF THE MATTER

I want to make it clear that I wasn't twisting his arm, using any persuasive tactics, whining too shrilly or using any advanced pub-ticker mind games when, back in about October, I was one day bemoaning the difficulties of pubs in the North of Cumbria to the sympathetic ear of Father BRAPA.

"Well, how about in the New Year, I drive you up there and we have an overnight stop in a place with few pubs, and I can drive us to some more difficult rural ones along the way and on the way back?!"  And that is why Father BRAPA IS the best, it really was that simple.

After a bit of thought, I came up with Cockermouth.  It has a Premier Inn and three GBG pubs, and on the outskirts, some of the most anti-social pub opening times in awkward villages I can remember seeing in the whole book!  What's more, as the plan developed, the three bloody awkward ones around Appleby were factored in for the Sunday journey back.

It had been a stop start kind of year so far, so here was a chance to really light the Stabillo green touch paper on 2020 ........


Timing our arrival was always going to be tricky, with two of our pubs not due to open til 5 or 6pm, even on a Saturday, and we were making such good time, that Dad thought it advisable to get one of the outer Appleby pubs done whilst we had the time ..... and would take pressure off tomorrow's journey back if we only had two to do instead of three.

Soon, we were in the pretty little village of Great Asby with bridge over a stream, quaint church and most importantly, a pub open at 12 noon ......

Dad went the full Martin Taylor with his "I'm not going to join you for this one, see you at the car in 27.5 mins" last minute comment.  So there was a bit of a surprised look on the face of landlord and a 'local' here at the Three Greyhounds, Great Asby (1690 / 2907) as I strode in, tee shirt, ankles out, unsuitable footwear, swinging a Sainsbury's carrier bag under my arm.  "Where's he appeared from?" was the expression, but I dead pan ordered a gorgeous pint of some Derwent Bitter and the bloke made a point of pouring some of it away as it was the first one pulled through of the day.  He may've seen my CAMRA book in my carrier bag!  I swivelled on my heels to see a classic 19th century pub scene, the cricket on Sky above a roaring fire with Dom "he plays for Somerset, that is why he's so good" Bess terrorising some fuzzy wuzzies with demonic off spin.  I joined in the 'bantz' as England put down a catch at short leg "yeh, well it looks easy in slow motion" I reminded them and they liked me after that.  Very much in my element, I glance out of the window to see Dad roaming the graveyard like a cute version of the Woman in Black.  Turns out the 'local' was a bloke from Hampshire who'd washed up here by mistake, and he tried to show off his interior designs but the landlord told him Salvador Dali had the same idea first.  Hmmm.  Two ladies came in, a very friendly duo, they were looking for lunch. "We didn't think it was worth putting the oven on because you are literally the first people to ask for food in here in 2020!" explained the landlord as though it was mid-August, but it was all so friendly and amicable, and they were given some pointers in Appleby.  After a quick bit of beer and pub chat, I said thanks and ta ra. Strong pub this, and one on the near impossible page 95 of the GBG. 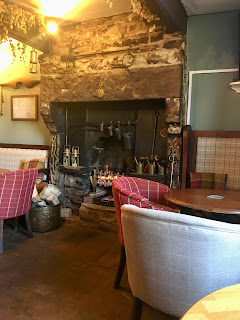 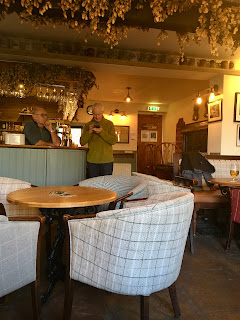 If we'd got off to a great start, the next few hours set us back quite badly!  Firstly, the farcical Premier Inn check in where the booking system decided to charge a totally random price and we had to faff around for ages forwarding emailed booking receipts to the ladies on reception, who despite not being at fault, hardly inspired confidence and got very Gestapo about breakfast arrangements.

We then headed up to the Barn Bistro at Gilcrux, the one pub that should've been open, five miles north of Cockermouth said the GBG but total bullshit, more like 10.  Closed.  Turns out winter hours are 12-2 and 6-11 and it was a grotty looking bar part of a caravan park, not the posh roadside dining pub I'd been imagining.  Both GBG and Whatpub had the summer hours listed.  Would we return at 6?

So all that was left to do was pretty much reverse into our 5pm opener at Great Broughton (it was only 4:15pm) and listen to 5Live, who immediately told us Hull City had fallen behind against WRDCFC.  We were both feeling pretty downcast at this point!

'Pub of the Year' said the banner, and no disputing the joys of the Punch Bowl Inn, Great Broughton (1691 / 2908) as a deserved champion against most pub opposition.  The Great Corby IPA at 5.5% was Dad's beer of the weekend, I'd only had their ales once before but I'd soon be seeing them everywhere.  The woolly hatted lady serves us after the locals, of course, this is a community pub saved from certain closure back in 2012, and here is the only 'but' for me.  Because with 'community owned' pubs comes a sense of 'our pub, not yours' which I've also experienced at places like the Golden Ball in York and Gussage All Saints.  Just that lingering feeling that one time visitors couldn't possibly hope to understand the 'bond' the locals have from the hardship they've been through, and it was clear we were being eyed a bit more closely than you'd normally expect - which at the time I put down to 'maybe people are just a bit weird in this part of Cumbria!'  But if we'd both been feeling a bit depressed and ropey sat in the car, the ale, fire and farmhouse style atmosphere were putting the colour back in our cheeks - complimentary crisps always a touch of class.  Okay, so we argued over whether Gilcrux was worth another try (I of course said 'yes', Dad thought they looked more permanently closed).  A few hundred dogs were lead in by various locals, one stunk of wet dog as they are prone to do, but it couldn't really put a dampener (excuse the pun) on a positive pub experience.

With the time approaching 6pm, it was off to a village called Tallentire for a pub that was due to open at that time.  It was so dark around and about, we missed the pub the first time, eventually squinting at it through the gloom. 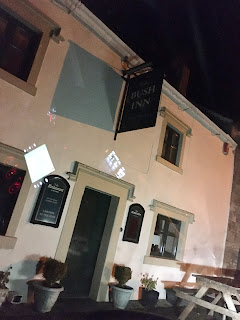 Dad's car created the only light in the village.  The place looked dead as a doornail.  5:59pm.  It isn't going to open is it?

Still arguing over whether to give Gilcrux another go, we compromised on me trying to ring them (far too sensible for a normal BRAPA course of action!)  Well, well, well, I got through to this voicemail that said they were closed til 4th Feb.  DAD WAS RIGHT.  He always is.

I was just breaking the news to him, 6pm, thinking we'd best just go back to Cockermouth with my tail between my legs, having had two failures, when this pub just kicked into life from nowhere and a lady opened the front door.  WHAT A MOMENT.  It no longer felt like Gilcrux defeat, it felt like Tallentire victory ......

Bush Inn, Tallentire (1692 / 2909) , pub saviour, pub moment of the year so far, and if I meet a nicer couple running a pub in 2020, I'll be surprised.  Absolutely lovely people, and of course, I excitedly explained the events of the last three minutes to them not pausing for breath!  Symptomatic of the whole weekend, the ale was of the utmost quality which was a relief, as someone joked to me that the local CAMRA struggle to get around their branch pubs due to the opening hours and tricky locations, so I wasn't sure what to expect.  The pub was as beautifully basic as you hope - wood burner, minimal furniture, wonderful slate/stone floors with linseed oil top(!) and just had an atmosphere which had us favouring it over Great Broughton, and that is some tough competition.  A local arrived to shout across from the bar as we tried to discuss Keswick, Hesket Newmarket and the like.  Super pub. 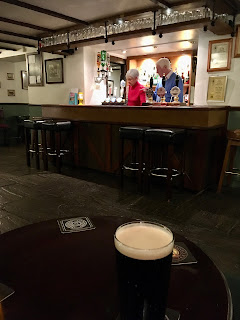 With my mood well and truly restored, it was surely all plain sailing now and off back to Cockermouth for the three pubs there.  What could possibly go wrong?  Join me tomorrow to find out!