BRAPA in concert?  There's a scary thought. I wonder what songs I'd play?

I did actually find a 'BRAPA' playlist that a dude called Mark had made on Spotify.  It lacked the punchy punk rock spirit I go for musically, but with tracks like 'No Mercy', 'Brick by Brick', 'Took a Hit', 'Beggin', 'Why We Lose', 'Hooked on a Feeling' and 'Figure it Out', it is clear Mark was trying to encapsulate something of the life of the pub ticker.

Anyway, ahead of my Saturday morning debut visit of Consett, let's have a quick health check .....

'Bandit country' is what my Durham friend John has called Consett ever since I've known him, so I kept my belongings close at all times, tried to stay aware.  I actually associate the town with a crisp advert that used to be on TV when I was an Essex youngster, Phileas Fogg the brand was, it was very weird and the tune went on about 'Consett Airport'.  Does it exist?  Didn't see any evidence today. 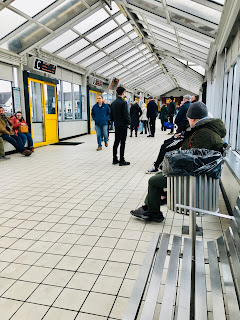 The glass roofed bus station contained locals, 90% of which had a look of life long despondency etched on their weather beaten features.  A dirty looking man who smelt of fusty library books tried to sit on top of me, and I was glad when a rare bus to Medomsley arrived to take me to my first pub of the day.  I'd be back in Consett for two pubs later on.

Medomsley was a surprisingly rural village, it smelt of farms and was quite tranquil as I spied in the pub, nicely lit up at 11:39am under a grey leaden sky ........ 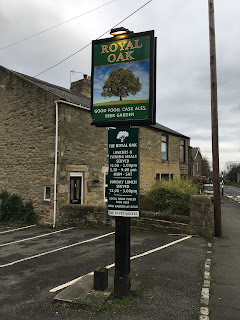 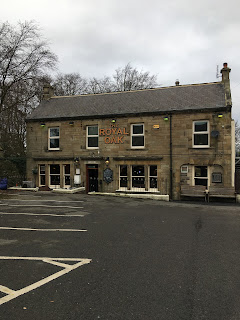 It had to be very much a whistle stop tour of the Royal Oak, Medomsley (1701 / 2918) as I'd worked out there was a bus to pub two at 12:13, the twist being the bus stop was a good 8-9 minute walk at some crossroads outside the village.  So it didn't help that (a) the barmaid/landlady didn't see me for ages and (b) the 'Workie' (have they really dropped the 'Ticket'?), but to be fair, she was a top lass and joked that the squeaking handpump of my replacement ale (Reiver, not Reviver as I said!) sounded like it was crying, and told me to avoid the entire right hand side of the pub which had all been booked out for a so far, invisible party!  This was perhaps the closest to a dining pub I found all weekend, but County Durham being County Durham, it had still had enough warmth and humanity to stop it slipping into South Bucks coma levels.  I chose the far left corner, and you know how it is when you are the only customer in sight, you have your coat on one bench, bag on the other side, and spread yourself out a bit.  So imagine my surprise when a quick walking old man descended on me and says "WHICH TABLE YOU ACTUALLY SAT AT?"  He had the WHOLE left side of the pub to aim at, but I apologised nonetheless, and within minutes, bang on 12 noon, he was presented with a cottage pie and garden peas which he demolished with the surety of a man who has been doing this same routine every Saturday for years.   An old couple sat in front of me to box me in, "I'll have a pot of tea ..... and a whiskey" says the lady.  She was less impressed with the 'Special' lunch menu item of a pulled pork burger.  'How big are yer buns?' she asks the barmaid.  I had to dash but thanked them for a cracking pint, feeling I'd packed a lot in to my approx 25 mins in the pub. 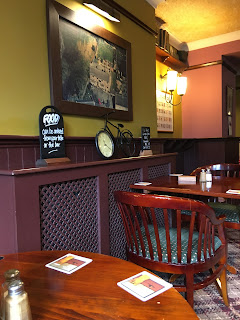 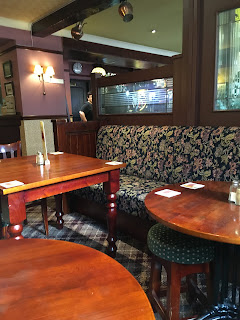 The mad dash to the bus stop at Medomsley Edge was in vain as it turned out.  Google Maps has saved me a million times, but despite claiming the V9 would stop at Rose Terrace, the warning signs were there when I discovered absolutely no bus stop!  There was a rusty post sticking out of the ground at a weird angle, maybe this was it?

As the bus approached, I stuck out my longest arm but the driver kept his eyes firmly on the road, totally blanking me, and turning the corner.  Bugger!

A 47 minute walk up and down hills back towards Consett followed, a bit of a killer with overnight rucksack as I overheated in my new sensible coat, passing dogs with joggers aplenty.  It was obviously 'local roadworks' day, they were setting them up everywhere and my walk was extended by the odd closed footpath, and in one place, the road altogether!

A huge relief then (for my bladder as much as anything) to reach pub two ...... 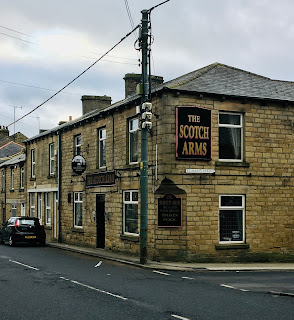 "I'd have posed if you'd given me more warning!" says the jovial guv'nor on arrival at the Scotch Arms, Blackhill (1702 / 2919) in reference to the fact he'd seen me though the window taking the above photo, and the locals dotted around the bar smiled inquisitively.  I ordered a Titanic Plum Porter and asked how England were getting on in the cricket, it felt like very much the type of pub where you wanted to 'engage' with those in it.  I went to the loo to relieve poor tattered bladder and splash my burning face with cold water, to be presented with an intriguing selection of male toiletries with a warning sign "don't nick 'em ya bastards, we don't have many customer so we'll know who's done it!" (or words to that effect).  I even splashed on some aftershave!  This pub was super-traditional, it wouldn't be to everyone's tastes, but it suited my taste in pubs very nicely.  I was the only customer who wasn't a local perched at the bar, making persistently amusing comments ... the routine a young lad did about Iceland's ageing shoppers in Consett was worth the entrance fee alone.  The guv'nor was obviously a Mackem, and there was much sympathy re the previous nights 0-0 draw with Doncaster, before the black & white striped variety of football fans left for their own match, one of them uttering the now immortal words "Steve Bruce says we can't win the Premier League, but no reason why we can't win the FA Cup".  I laughed so much, a bit of wee came out, so I went for my second pee and a squirt of a 1970's deodorant, before taking my leave.  The barman, temporarily distracted so he didn't hear me say 'thanks', was told off my the locals for not saying bye to his customers.  Top pub.

Despite my legs being shattered after the rigours of last night's walks plus this recent one, I couldn't be bothered to look up a bus and besides, the more 'outer' Consett pub was only 0.8 miles walk.  Piece of piss in the grand scheme of things, so one foot in front of t'other, off I trotted ........

The pub, when it appeared, looked wholly encouraging from the outside ...... 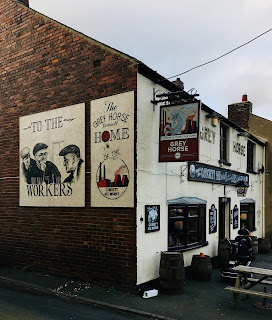 And it's funny how things come back to you, I suddenly remembered back to a drunken episode in Bishop Auckland's Green Tree and a local raving to Dad and I about this pub.  Well, he wasn't wrong.  The Grey Horse, Consett (1703 / 2920) managing to rival the wonderful Tap & Spile in Framwellgate Moor for pub of the weekend, and I seriously didn't expect that!  What gave this the edge was the wonderful reception given to me by the locals at the bar, especially the Yeovil supporting Geordie) and the Shrewsbury supporting barman (who looked uncannily like my boss at work!) which started with a 'you've got lots of beers to choose from' and soon was me holding court in a kind of potted history of BRAPA, with much interest in what I'd done so far in County Durham.  I realised a couple in the far corner were listening to every word too, lovely stuff!  They brew the Consett ales here which I've definitely seen in other pubs, and if the main bar wasn't already small, cosy and warming, the maze of corridors through the back rooms to the bogs showed it had a bit of depth as well.  What's more, our Shrews legend told me it is usually a Hull City fan who covers this shift.  Then, he said goodbye, put a scarf on and went with another dude to watch Consett AFC v Ashington.  Glad to see they won 4-1.  Some pub this, a must visit.

So, 'that was nice'.  Three pubs still to come, and 'Spoons next.  Could it top that?  Don't be silly, but I'll tell you about the more hazy vague second half of the day later this week .