BRAPA in .....HE SHOOTS, HE SCAWSBY : SOUTH YORKSHIRE NIGHTS

Flu', Football, Flippin' Closed Pubs.  Yes, it had been all the F words hampering what I'd hoped would be Fruitful BRAPA progress in the early stages of 2020, and on Friday night, it was the turn of yet another F, 'Effin' Scroaty Donny Bastards to delay progress at the level crossing in Bentley.


Yes, I jumped off the train with a view to walk 20 minutes to the pub in Scawsby, but kids managed to jam the train doors so the level crossing remained down for a good 35 minutes as the train just sat in the station, with no footbridge or an obvious way around an option!

'How do you know the kids were from Donny and hadn't travelled from Wakefield?' I hear you ask.  Well I don't, but this way suits my narrative of disliking Donny.  And yes, I know from my New Year's Day comments section a lot of you see it as a 'proper pub town', but that is no consolation to me.

To the sighs of relief of the fed up communters (commuters who are munters as well, originally a mistype) and angry waiting cars, the barriers finally came up and we could get on our merry ways.  I'd already decided that tackling Hatfield tonight (my original plan) was a step to far in view of timings, thanks kids! Symptomatic of my start to 2020.

After predicting a Hull City 0-3 home defeat to Fulham and an earnest phone call with Father BRAPA about a faulty DVD player, I realised I'd made good time and was in striking distance of my 3rd pub tick of the year.

About fifteen road crossings followed (why do they build pubs in the middle of traffic islands and road junctions, properly dangerous?!) and a Neapolitan Ice Cream of a Marstons Dining Venue was staring back at me like your dodgy Uncle Willie at the school gates ...... 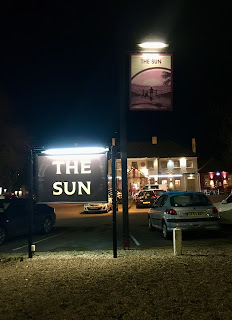 And the cacophony of garish colour continued into the pub at the Sun, Scawsby (1681 / 2898) with the pink now interspersed with streaks of lemon and lime pistachio.  Uncomfortably hypocritical of me to use the word garish with the contents of my wardrobe, but even BRAPA has its limits!  It was almost like someone had warned them 'Marston Dining Pubs can be bland, so let us buck the trend'.  But being in a real 'boots 'n braces, fly by the seat of your pants' part of the UK, it was in no way posh, straddling Happy Harvester, Sizzler and WMC all in one fell swoop like yer dodgy Uncle Willie on the playground see-saw sucking his middle finger.  Speaking of which, kids were everywhere - running, shouting, throwing themselves onto the carpetted floors, all vaguely attached to young men with Peaky Blinders hairstyles, pints of Carling and neck tattoos.  Even this motivated pub photographer decided against trying to capture the full colourful 'beauty' of the pub in these circumstances!   As I perched at the bar with a perfectly well kept pint of Jennings guest ale with the unmistakable aftertaste of 'dipped in sweaty socks after a 12 mile walk around Keswick'. a man coughed loudly in my ear on the way to pee, an old lady looking sympathetically at my 'lack of seat, perching predicament', but I didn't mind, you could've put me on a Qantas airline Business Class bed, and I'd still not have been able to relax in this ultra lively pub! 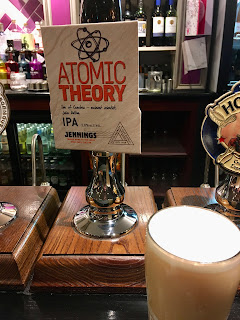 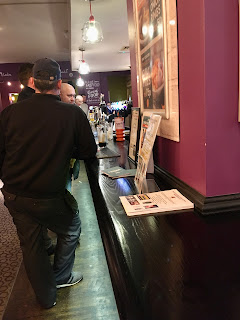 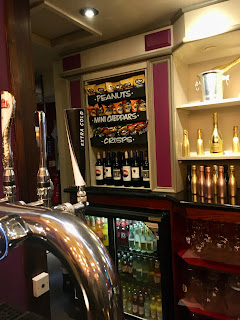 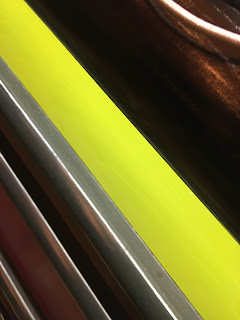 Feeling a bit bad for having decided against getting a second tick done in Hatfield, I noticed that Cusworth Hall was only a 10-15 minute walk away, and a guy at work (we'll call him 'Mark Bennett') into his ale and sometimes pubs had recommended this as a possible preemptive last year, so I was surprised to see CAMRA had opted for a shiny Marstons house ahead of a brew pub!  Perhaps the warning signs should've been flashing there and then.

Google Maps had plotted the pub location quite hopelessly, by a bus stop on the main road, but like he read my mind, 'Mark Bennett' (as we call him) messaged me with maps & directions.  Lifesaver!

Pitch black down this country lane, I wondered briefly what the hell I was doing, especially when an army of about 15 joggers were instructed to stop at a wall and do some stretching exercises!  There was a weird moment of stand off, where I turned to stare at the line of them in an amused fashion, and they grinned back.  The fact not one word was exchanged made it weirder.

After walking the wrong way around the hall, I found a cut through, heard some music and saw a lit marquee ...... 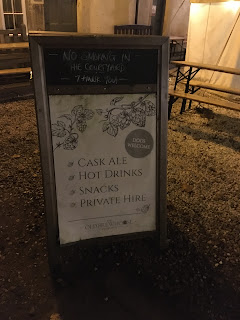 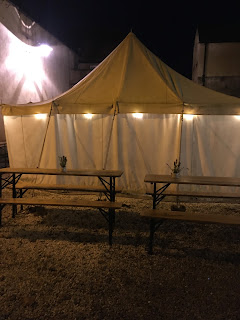 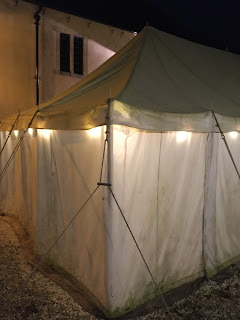 'Surely this can't be it?' I thought, walking in to find it all deserted.  No, this was just the elaborate outdoor drinking area and probable some time entertainment venue.

I turned to see the pub housed in a stone building just behind ....... 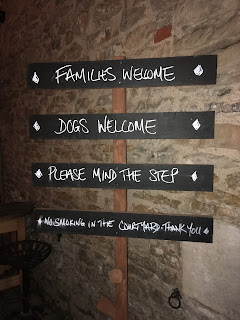 I turned the awkward big handle at the Old Brewhouse, Cusworth, my progress immediately impeded by three small dogs and I had to hurdle the leads like skipping ropes to order my pint of Lady Isabella, the beer that this 'Mark Bennett' character had most recommended.  I stood stock still until the dogs and their attached owners departed and could sit by the door.  The folk assembled seemed rather reserved for an outer Donny crowd, but the two blokes seemed solid decent chaps,  whilst the room was pleasant and gave me serious North Dorset vibes - Sixpenny Handley and especially Cranborne's micropub, though less good than both.  The chilliness of the seat by the door and particularly the poor beer were why I couldn't enjoy the place, and it became quickly evident why the Sun at Scawsby had been the preferred 2020 GBG entry (well, assuming this place has been open long enough to qualify!)  'Twas hard to say at first whether it was just an ale that didn't suit me, but seemed nothing like an IPA and pretty sure it was on the turn.  I tried half a Roger of Bully too, this was a bit better but strangely fizzy.  A nice guy from Axholme told me on Twitter he'd brewed better when he was a young 'un, and I didn't doubt it, and tellingly, I didn't see one other pint of cask pulled in my 40 minutes or so here, all going for the pubs keggy products on the wall.  So a funny one, cos in some ways, this was such a typical modern GBG entry.  We'll see if it makes it in the future.  Obviously now I've made the effort, I kinda hope it does!

So there we have it.  A delayed bus.  An unwise stodgy sweet black thick pint of Stollen Stout in the gorgeous Draughtsman (the best thing about Donny along with the Little Plough) had me rushing for the train back to York ....... 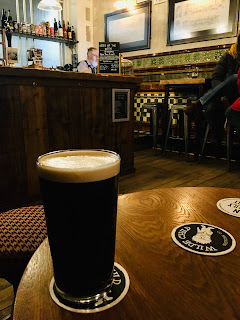 Big day in Lancaster tomorrow (I'll tell you about that on Wed), so had to be sensible and get myself back at a decent hour for a nice veggie lasagne, pint of pear and elderflower cordial and straight to bed!