BRAPA .... FROM THE DOG END OF CARDIFF TO THE CAT'S WHISKERS OF NORTH KENT

Cardiff seemed pretty wired on this particular Saturday night.  No doubt they all wanted to give QE2 a resounding send off in the only way they know how, by getting smashed.

Daddy BRAPA had made the sensible decision to head back to the hotel at this point.  I cannot afford to be so sensible, it isn't in the spirit of pub ticking.  His final act was to photograph me outside this particularly lively Wetherspoons .... 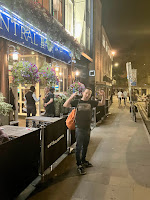 Party time at Central Bar, Cardiff (2379 / 3943) , it could be the Saturday before Christmas judging by the huge groups of yoofs - women in Welsh jumpsuits, men with square shoulders and huge bodies but tiny pinheads and skinny legs.  I'm so astonished to get served without delay, I forget to hand over a Mudgie voucher, but the Oakham JHB is on song and exactly the sort of ale I need in this, my seventh pub.  Of course, folk are generally sheep, possibly in Wales more than other places, and are all congregating around the bar and middle of the room.  I slither through the crowds like a Yorkshire snake and find a welcome amount of space by the far wall, not far from the bogs.  I can observe these curious beasts from a safe distance now.  And the next 25 minutes passes without incident, which rarely in the world of BRAPA, is exactly what I was hoping for. 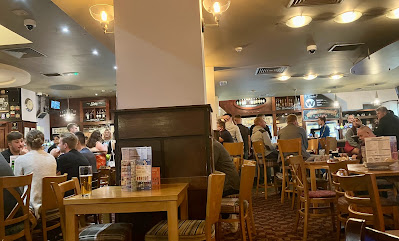 I'd spied a GBG pub just across the road.  Pub eight?  Ugghh.  But it'd be rude not to pop in and get it ticked, providing my eyes were focused and not at all drunk .....

Good to go ... let's crack on.
Bit of a surprise how fuzzy the pub looked on arrival, considering my extreme sobriety, I guess it looks just as blurry during the day.  If you've ever been, I'd be interested to know. 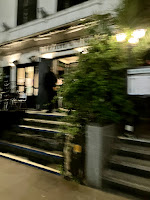 Funny how crossing a road can make such a difference.  Flute & Tankard, Cardiff (2380 / 3944) must have an invisible forcefield surrounding it to keep the Spoonsie scum out.  A gentler, calmer, loungier Saturday night atmosphere this close to a throbbing city centre you could not wish to find. A man with the voice of an audiobook serves me a pint of 'Rush Hour', heavy traffic on the pump clip, again it was in huge contrast to the surrounds.  The only customer on the move is an oldish man with a glass of red wine.  He looks a bit lost and has the gait of a gorilla, his arms brushing against the floor as he walks aimless around.  There were so few folk about, I even felt quite comfortable eating my pickled onion monster munch quite openly, which I'd recently purchased from a nearby Tesco Express.  I'm not sure that in all circumstances this pub would have enough to hold the BRAPA interest, but late on a Saturday night, eight pints to the good, there's nowhere I'd have rather been. 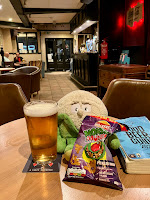 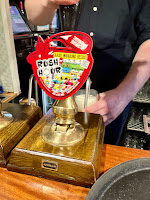 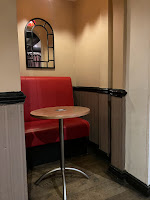 Fast forward to the following Saturday, and the first of two quick-fire BRAPA holidays was just about to get underway in Sittingbourne, although with hindsight, basing myself in Maidstone would've made more sense.
I've often heard Kent referred to as the 'Garden of England'.  But having now been to Gillingham thrice, Maidstone, Ashford, Chatham, Hythe & Dymchurch, I can't help but wonder if the garden in question belongs to Fred West.
Despite sleeping in by two hours, missing my alarm and my train, I made up the time superbly and arriving in Gillingham for 12 noon hadn't seemed possible three hours earlier. What is more, the Gills were at home today to (bloody rubbish) Mansfield, which increased my chances of ticking this football pub of peculiar opening hours .... 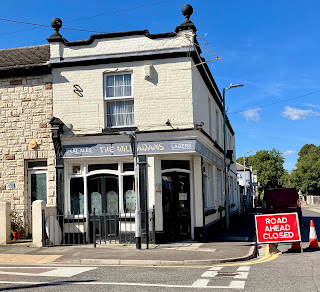 If the frontage and fontage seem to have a decidedly 'eastern' feel at the Will Adams, Gillingham (2381 / 3945), it is no coincidence.  Will is Gillingham's most famous export (well, unless you count James Jordan off Strictly) - an explorer who went to Japan, made it big, became a samurai, and weirdly, never felt compelled to return to the town.  I walk in and confuse the locals with the Hull City badge on my jacket.  There isn't a visiting Stag in sight, only five Gills men littering the bar and laughing heartily.  The vested barman serves me this glorious Oakham guest (first truly good pint I've ever drunk in the town), a local asks me about Tom Eaves, and the barman passes me a story book on Will Adams but tells me not to lose it or spill on it or burn or tear or destroy it, because it is their only copy.  He's heard about my GBG hasn't he? I'm feeling the pressure.  But finally, a Gillingham pub I can truly call great (yes, I liked the Past & Present pongy micro for what it was) but as true pubs serving good ale with good folk, Gillingham has a winner. 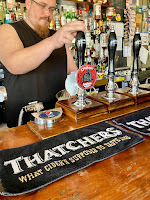 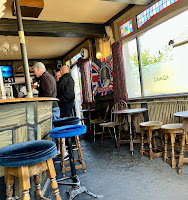 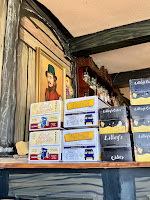 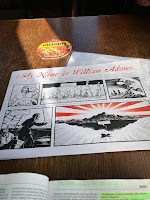 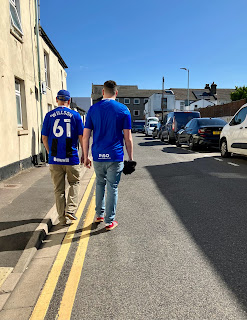 I made my way across to Sittingbourne, but still way off my 3pm check in time, so I decided to get a couple of Micros ticked off, although lugging your heavy bags around any pub isn't ideal, especially micros. 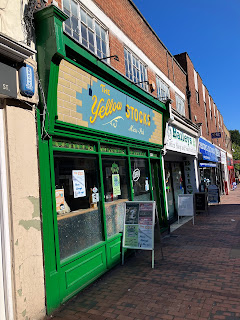 Yellow Stocks, Sittingbourne (2382 / 3946) picked up where Will Adams had left off with a cracking, homely welcome.  An excitable young chap with the same voice as Cockney Rejects lead singer causes shocked gasps when he declares he isn't a huge Goachers fan, one of the leading local breweries around these Kentish parts.  We bond over a delicious liquorice mild.  He causes more gasps my declaring the Paper Mill his favourite Sittingbourne pub - top marks for bravery.  The couple who run the pub are fabulous though, and soon I'm regaling the small room with BRAPA this, BRAPA that (the poor buggers), even though a sourpuss of an old woman behind scowls at me in a 'Harry Enfield doing an impression of Deborah Meaden' type of way.  As the other customer's slope off, a young lady appears from the garden and says "can I get/grab a .... <insert drink name here>.  Landlady hates this particular Americanism import, which reminds me I must stop calling people 'guys' every two seconds.  I'd forgotten Hull City are playing, early kick off at Swansea, 0-0 58 minutes gone.  I spy this pub has a 'real' lager on called Racing Tiger.  "I better have a half, push us on to victory" I tell our hosts.  Soon, they are chanting 'Come on youuuu 'Ullll!' as I take my first sips.  Five minutes later, we are 2-0 down.  Oh dear, never trust lager.  Loveliest lager I've ever tried ever, mind.  They send me off to Donna's Ale House, saying I should definitely ask if you get a free gin with every pint, just to wind them up.  So I say I will. 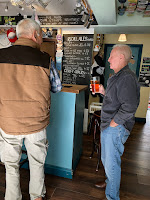 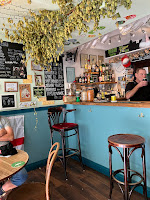 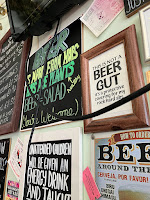 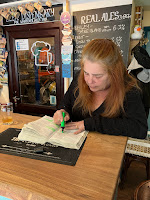 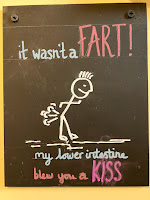 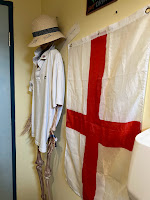 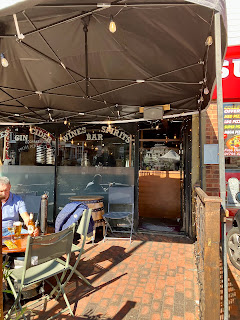 Little did I know at the time of my visit that Donna's Ale House, Sittingbourne (2383 / 3947) would possibly be my most divisive pub of the week.  THREE people, all independently of each other, would tell me a tale of woe that has stopped them from every returning here.  One guy was even accused of stealing stuff when he swears he hadn't!  Crikey.  I didn't think the layout was particularly conducive to the kind of conversation Kent's plethora of micropubs are famed for.  Partitioned, dull, chilly, meandering.  I ask for a pint of 'Huell Melon' (Hull City 3-0 down now, playing like a bunch of melons).  I'm pleased when a jolly bloke behind me pipes up "you have to say it like you are puking up ... like HUEERRRL". That rare moment of bonhomie gives me the confidence to ask the barman "I've just been in Yellow Stocks and I've been asked to ask you if it's true you get a free gin with every pint?"  (This place is more famous for its gin range than its beers).  Of course he tells me no.  I walk away with a "ha, thought not!", but he's not finished yet.  "Would you go in Yellow Stocks and ask for a whisky with every pint ... no you wouldn't!" he shouts after me.  Ooops, the lame joke / mischief making didn't translate.  I sit outside, cos the inside is depressing.  Outside is quite depressing too.  A young family are playing Uno, but the cards keep blowing away.  When the Dad, who has sent his Mum n son to get him a pint of Dudda's Tun cider, can't get the specific flavour he wants, he abandons his even younger daughter to go inside and quiz the staff on the Dudda's range.  The Wetherspoons opposite looks more enticing at this point, I must admit.  At least it is now 3pm, and I can check into my hotel. 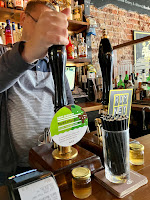 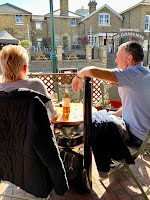 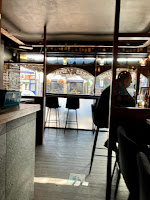 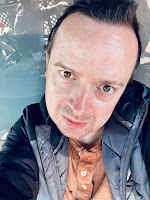 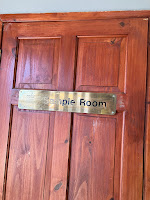 Then I realised I'd only gone and twisted my bloody back.  That's what happens when you are on high micropub stools and have all your heavy baggage with you.  I blame my new elaborate peach and mango shower gel, heaviest bottle ever!  Oh well, I could rest for a couple of hours because one of my Isle of Sheppey ticks didn't open til 7pm.  Even on a Saturday #HobbyPubs
I'd love to tell you about that soon, but tomorrow is 'month end review' and then I've got to think about YET another BRAPA holiday ... amidst more train strikes, and then I'm on jury service for two weeks.  Ugh!  So no idea when I'll next get to write about my Kentish adventure but it might well be dark and snowing.
See you tomorrow for month end review,
Si