Two of my remaining three Greater Manchester ticks had come in Oldham, which sort of makes it the Orkney of England if you think about it very carefully.

Cob & Coal had been fabulous, could our next pub follow suit? 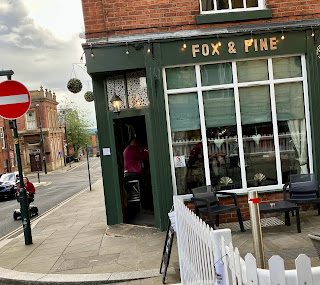 It certainly could!  Fox & Pine, Oldham (2371 / 3935) was another corker, although on this occasion, the service was swift and business like, meaning any repeat of the 'Tandleman says hello' line was never really on.  I'd gone for an S'more Porter because the Salvation Coffee Porter had just gone, but when I looked down the line, like a full back looking for the run of his winger, they had Bass on, the Franz Carr of ales.  Darn it!  I'm surprised to learn that this place opened as late as 2020, because the lived in atmosphere was so natural.  You can't manufacture that.  It comes from the right kind of people running a place and a good local crowd, and the place was busy enough to keep the pub doomers at bay, without being uncomfortably so.  Having said that, a bloke does pull his stool back so his back rests against mine.  I can hear him swallow each gulp of beer, feel his breath on my neck as he turns, and almost the bristles of his stubble.  Now I know what you are thinking, 'Si, you've got a future career in Mills & Boon style pub kink when BRAPA finishes' but what I'd say is that I've got plenty of time to hone such skills.  Point is, bloke had no need to be that close to me, however companionable and friendly Oldham folk might be.  Was he the same bloke who comments that he's known as Toby the Trumpet?  I sincerely hope not.  Oscar has to deal with a large contingent of Fox paraphernalia, 'pine' a bit lacking. Chris Pine cardboard cut out?  Christmas tree?  I didn't see either.  But another really top place, and I got to bury the Oldham ghosts of my slightly below par beer quality here in 2017/8 GBG trio. 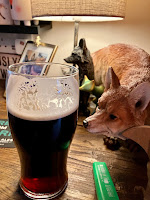 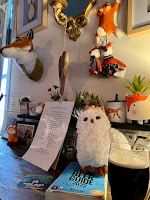 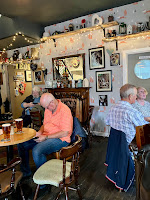 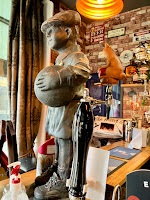 There was no (obvious) direct route to Stalybridge but Google reckoned that if I could catch the next bus to Greenfield, I could just about catch a connecting Staly train if I dashed.
The bus was delayed, which gave me chance to break into the local Costa with the help of a lady on a Mobility Scooter and use their 'facilities'.
The bus was in when I returned, but heaving, stuffy, and the crawl out of Oldham at rush hour was  painstaking and we were soon tracking at 11 minutes behind, which put the train connection in doubt. 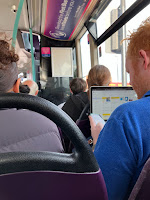 Twitter was telling me that the Queen sitch was ever more dire.  Apparently the news readers and reporters had all changed into black, which sounded ominous, but I continued to choose to believe that she's practically immortal and would pull through against the odds, though it did now look like the Lemsips weren't working, which is why I always go Lemsip Max despite the extra couple of quid.
As I trot down the hill at Greenfield, I'm thinking I've missed the train by two minutes most, and have a half an hour wait ..... but fear not ... it is delayed by three mins and is just coming in when I reach the platform.  A rare example of train good luck! 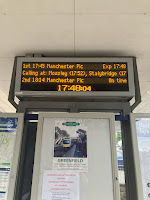 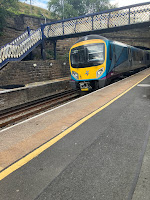 Ah, Stalybridge my old friend, how've you been?  It has been a while but it feels a very familiar place of BRAPA past.  I never leave sober.  But surely today would be different.  One pint, a quick in and out, right?
A lady gurns at me outside Q, then I cross two foreboding looking canals, a bereft bag lady smiles sadly at me just over the second one, where the pub is lurking.  Last GMR tick, here we go! 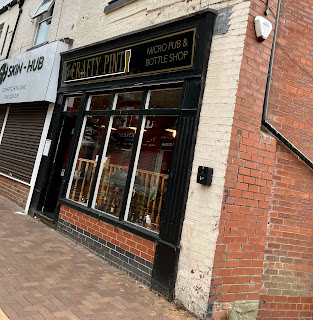 Looks a dull, unpromising micro from the outside, but all credit to them for giving the place a bit of vibrancy by painting the inside walls red at Crafty Pint (formerly Cracking Pint), Stalybridge 2372 / 3936.  The first thing I witness is an exchange between the main man and a customer.  It's about the Queen - he's arguing the 'tourism's good financially for the country' case, she doesn't sound fully convinced but takes his point.  I order an ale, Eureka from Lancaster, perfectly pleasant but doesn't get my juices flowing.  I take care not to stop back too quickly because a tiny dog on a lead called Max (due at vets tomorrow) is sniffing at my heels, and his lead is a potential trip wire.  Very doggy friendly place looking at the decor.  I sit on a high stool in the centre, two chaps sit close to me and say 'ow do' and hit the Blackedge.  The doggy family soon leave so just the main bloke and three customers.  They are excited because Bob Dylan is playing on the radio.  Time for the satisfying moment I'd been waiting for, as I unleash the green Stabilo on GMR to get it fully greened!  Oscar the Owl taking the glory, when he's barely contributed.  Poor KLO.  It's a dog eat dog (owl eat otter) world being a BRAPA mascot.   I complete my Twitter check in and idly refresh the news section.....  'SHIT!  Queen has died.  I look around, realise the three chaps don't know yet.  BRAPA Breaking News #BBN #SiSportsNews.  I go over to tell the barman.  His reaction is like mine.  Saddens him more than he was expecting.  Shocked but not surprised.  God Save the Queen (not the Sex Pistols one, obvs) starts playing on the radio.  We tell the two blokes, they're probably sad Dylan's been cut off in his prime.  The bolshier guy who ends up being pretty sound proclaims "HA, you can't be shocked a 96 year old lady has died!"  I then clear my throat and proclaim "I'm staying for a second pint.  Under the circs, it just feels right!"  This ale is more to my taste, Citra by Blackedge.  Oscar falls off the table in the mayhem.  The radio is playing some right maudlin stuff now so the guv'nor consults us and we agree best to turn the damn thing off.  Lots of chat about how King Charles III sounds weird, how she put in a decent shift etc etc, nothing you've not heard online or in this incessant rolling news coverage since, but there in the Crafty/Cracking Pint in that moment, it was all very bittersweet and reassuring.  Being a pub felt like the right place to be.  As it so often does. 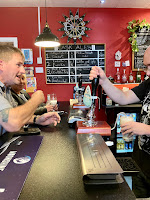 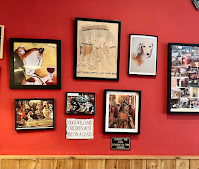 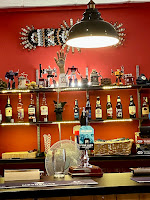 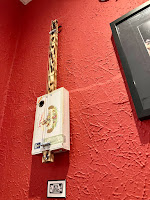 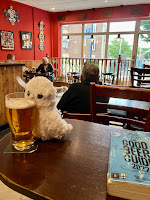 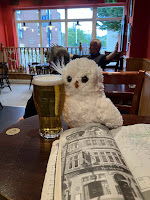 After saying farewell, I realise I still have half an hour until the next York train (or Huddersfield at least) so I pop into Buffet Bar for what I think is a sixth or seventh visit.  I always think 'wow, this is on a par with Dewsbury as my favourite station pub' but I'm always a bit too hazy by I leave to remember any details apart from it being quite long wooden and thin, and having a few separate areas and some nice decor.  I got a very nice pint, then I realised I wasn't quite ready for home so missed the next train and got another one!  Thus maintaining my 'never totally sober leaving Stalybridge' record. 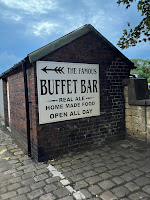 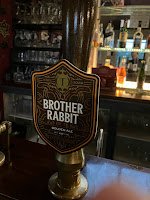 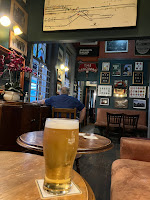 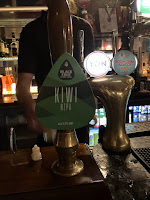 We'll fast forward 72 hours for the final tick of this blog.
Daddy B. and yours truly were due down to Cardiff for an overnight football special.  Cancelled of course cos of her Maj.
Match tickets, hotels, train tickets, all booked at great expense - non refundable, no chance of getting back down here for the rearranged midweek fixture.
I could attempt faux outrage, but in reality all it meant was more BRAPA ticks, less disappointment, and more time to be a bit more adventurous re the pubs we chose.  A BRAPA win, cheers Queenie.
After a change at the hellllllhollee that is Birmingham New Street, we'd just passed Chepstow when came the ticking moment of the year.  Yes, Retired 'MartinTaylor' Martin rang the Pub Tickers Whatsapp group chat, and shared his camera as he strode bravely across Rousay and turned the door handle to enter his final GBG pub!
The quality wasn't great, Martin had his camera facing the wrong way, and the sun meant a fair bit of glare, but it looked a decent boozer, Christine made a background cameo, and I also got to see Martin 'Maltmeister' Alsop and Jim 'Jim' Brunt for a brief chat too (no idea where Duncan or Alfie/Ian was, Eddie had a good excuse cos he was getting off a bus in rural Kent which is never easy.
The connection cut out before we saw him order and sup his winning pint, but Daddy BRAPA witnessed it in his mind anyway.  Not a dry eye in the house as we pulled into Newport station.
"I need a pint so let's get to the nearest pub!" cried Daddy B. in a strangled manner an hour or so later as I navigated us to Cardiff Central's Platform 8 and onto another train which took us the short distance to Penarth (I'd suggested we do the furthest out and work our way back in).  But it was already 2pm, the Dadster had a point.
And it was hiding from us! 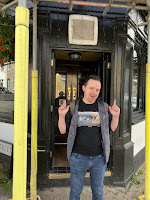 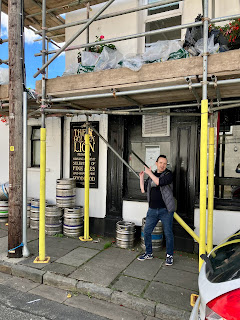 Scaffold-clad pubs normally do well by BRAPA, and the Golden Lion, Penarth (2373 / 3937) was the first of many pubs today to deliver.  Almost like an assigned welcoming committee, the barman booms "you havin' a tour around?" so I pull the GBG from my bag, hold it aloft, and tell him and anyone else who cares to listen "I'm visiting every pub in the Good Beer Guide ..... but not all of them today".  Well, that makes a bloke laugh.  The Grey Trees pale is drinking fabulously, England have South Africa at 38/6, and the barman is so cockney, it puts me at ease and makes me feel a bit more Welsh! Then Daddy BRAPA does something I wasn't expecting, swoops down on a clipboard and orders us some grub "to keep us sustained for the day".  It is a bold move as I'd been expecting to eat much later, but the halloumi fries, chips with skins and doorstop sandwich mean we can now drink the Cardiff area dry.  The music is great in here too, they love a bit of Shirley Bassey and Hank Williams.  Later they play obscure Cranberries and Garbage, which don't quite hit the spot.  This place starts a trend today where pubs sound like they are going to be dining and twee, but because the folk of South Wales are such friendly, down to earth nutters who love a pint and a laugh, almost everywhere feels like a boozer, and this was one of the boozeriest. 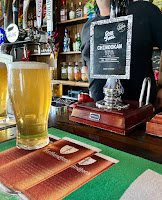 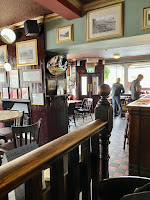 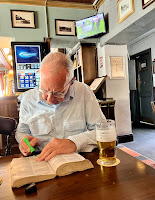 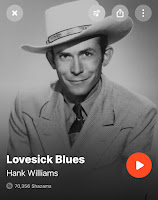 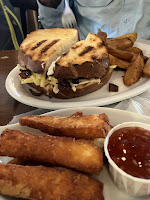 I'll leave it there for now cos as usually the words have gotten away from me.  I'd love to say I'd be back on Thursday to tell you about the other seven pubs we did, but I fear that might now have to be after my next BRAPA holiday, which starts on Friday/Saturday.
See you in an unnamed pub fairly soon, Si
Posted by Si 'BRAPA' Everitt at 9:16 pm