BRAPA in ..... TICK ASTLEY : NEVER GONNA GIVE PUBS UP / BALLET IN BOOTHSTOWN

The beauty of pub ticking is that you just never quite know what you are going to experience.  Look at yesterday's trip to 'One for the Road' in Bolton for example, a jaw-droppingly bizarre.

And now we had the following day, Saturday 30th April.  Boothstown on the face of it looked a rugged old place, situated midway between Manchester and Leigh.  I'm imagining grizzly old blokes drinking Bitter for £2.50 a pint.   A man removing a fake leg and drinking out of it, popping a glass eye in his pint, a bit of snarling / growling in my ear, these were all things I'd mentally set myself for.

Accidentally walking into ballet class wasn't one of them! 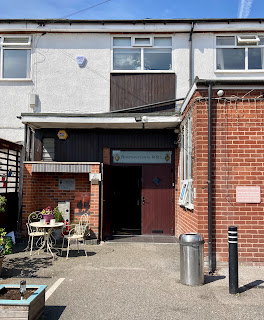 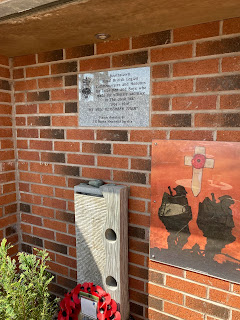 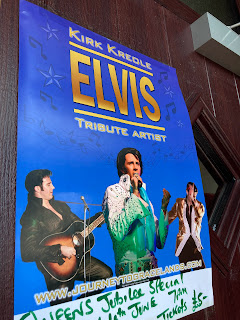 ...... Exhibit A : Kirk Kreole.  A lady in a car is doing her lipstick in the mirror.  She clocks me so I smile in case she is here to open up and pull me a pint.  The front door of the club is unlocked so I wander in.  I hear noises coming from the room straight ahead, so I stride forward with purpose.   I'm confronted by a scene like this ......

Embarrassed, I spin around and do the quickest, most fluid 180 degree turn of my life, probably quite ballet-esque now I think about it.  Back towards the entrance, a side door leads into a cosy bar room.  Of course, how could I have been so silly?  The ballet hall looked like the kind of place you might host a beer festival, but this was more like it.  Beautifully furnished, deep red benches, poppy artwork and murals adorn the walls.  With the sun streaming in, it is a lovely place.  The only problem is, the bar area is dark, and there isn't a soul around, just the occasional squeak of a sole (of a ballet shoe) from afar.  I sit on the bench in the sun, the lady is the car is now doing her eyelashes.  I make sure she can see me, you know, just in case.  At 12:10pm just as I was getting a bit twitchy, a guv'nory looking guv'nor appears.  "You open?" I call from the corner.  "I am now!" he replies, going a bit Kenneth Wolstenholme.  I go for a Holt's Bitter (it was that or Wainwright), sit in the corner, ring Mummy BRAPA to do Hull City predictions, a few folk wander in, acknowledge me with a nod, but all go to sit outside.  And that was that.  The lady is still sat in her car as I leave, powdering her cheeks now.  Probably just a ballet Mum after all that! 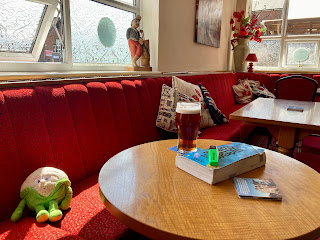 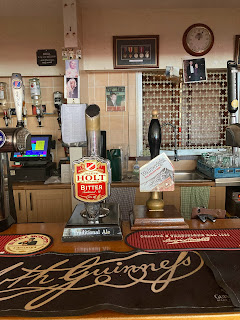 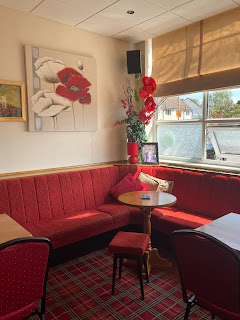 I cross a couple of roads, one easy, one not, and find myself at pub two where more punters are enjoying the sun.  The sight of a mobility scooter cheers my heart. 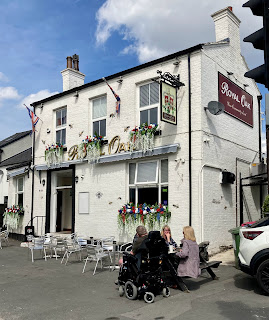 Royal Oak, Boothstown (2183 / 3746) chimes in with the cheap honest boozing community feel I'd been expecting in my pre-ballet mind's eye.  A small corner bar is dotted with morose middle aged man drinking lava lamp style pints of Coors,  and blinking blankly up at the grand finale of the League One season.  It was all cracking off in Plymouth, the McDongs were up against it.  Plenty of Man Utd decor on the walls in here, who knows, they might be playing at Home Park soon the way they are going.  I'm greeted in a companionable manner by our host, but the Holt's has gone so he has to change the barrel, so I lean on the bar, drinkless, trying to look like I belong.  The Holt's is really good, benefitting from the fresh barrel and I sit amongst the chaps, Colin wondering if the coast is clear to put in an appearance.  An Irish man returns from Ireland.  You can tell cos he keeps telling everyone. "I love this pub so much, I can't stay away (to be sure)" he later tells a barmaid, blatantly angling for a free pint and a snuggle.  Someone asks someone else how their dog is.  "He's dead!" is the reply.  The Irishman suggests this chat is killing the previously positive mood.  We all chuckle in agreement, but people seem happy to stay on the dead dog theme.  It's that kind of pub.  Rewarding and amusing. 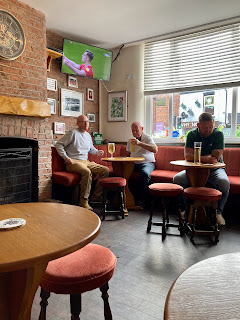 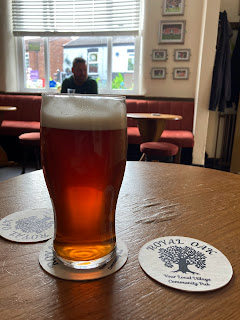 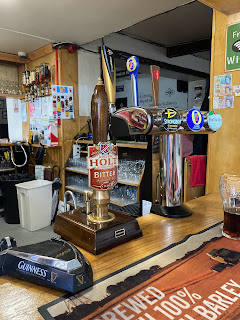 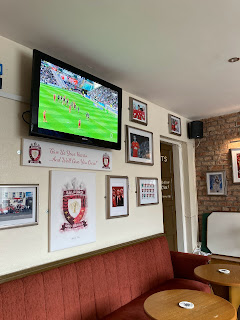 Boothstown had been fun, but I had plenty more on the bus route back towards Wigan to keep me entertained.
First stop, just a couple of miles away is Astley.  One of the many west GMR places who like to stick new pubs in the GBG just for the churny giggles.  But unlike that horror on the canal, this one looked kinda promising ..... 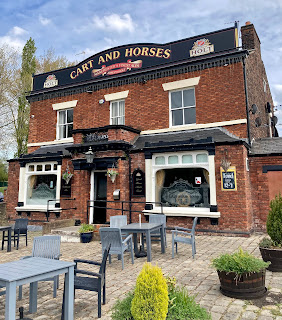 And it was.  Cart & Horses, Astley (2184 / 3747) was the third consecutive Holt's Bitter for under £3 pub of the day, and at this point, I wondered whether I could break the 'same BRAPA beer in a day' record (5 Bass in South Derbyshire/North Staffs July 2018 if you were wondering).  I know many folk who'd hate this lack of choice, but for tickers like me staying for just one pint, range isn't important so long as the quality is there, and I prefer this Holt's even to the Royal Oak variant.   It is served by the friendly Ashley, I hope her surname is Astley.  I elect to sit in the smaller 'Vault' because we just don't get Vault rooms where I live, perhaps exclusive to the north west. They always makes me think 'Crypt' and I'm half expecting a cobweb covered Dracula to appear from a hole in the floor, but that might be my weird mind.  Colin has done his job, got noticed by the landlady, who sits down for a very detailed BRAPA chat, made all the more intense by the fact she's watching me like a cat watches its prey, extreme eye contact, though she had earlier lamented 'people don't look each other in the eye any more' so perhaps she was over compensating.  Lovely though, I did the full BRAPA diatribe.  She asks if I'm enjoying the Bitter as her locals tell her it is an 'acquired taste'.  I tell her I don't think that is true at all.  Unless you've never drunk owt but lager I suppose!  Anyway, time I was off, I wasn't giving myself a lot of time for this next bus and needed a wee on the way out. 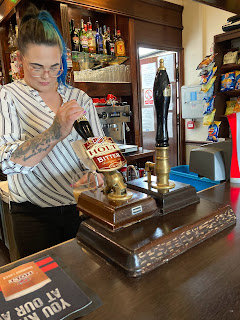 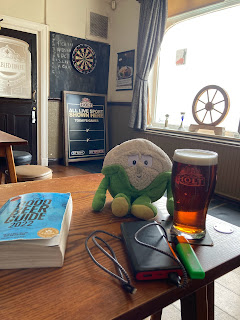 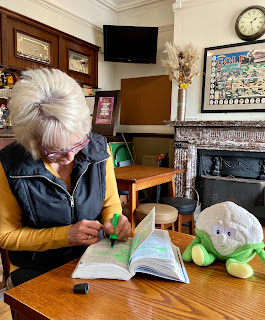 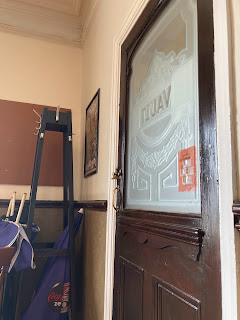 Luckily, the bus is a few minutes delayed, but before much longer, we are in Leigh.
My third trip to Leigh, and I don't think I've ever quite accepted what a tricky place it is to reach.  No railway station here seems wrong, it is a good 30 minutes from Wigan and more from Manchester.  Your best bet is probably somewhere like Atherton train and a ten minute bus ride.
This remoteness shows in the people sometimes too, I've previously sense a bit of needle and aggression in the air of one or two of the pubs, but that couldn't have been further from the truth in our next tick ..... 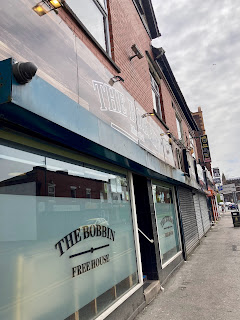 The GBG says 'one roomed micropub' but for me, Bobbin, Leigh (2185 / 3748) would be better described as a 'modern yet traditional style boozer' for I thought it was one of the strongest pubs today.  The landlady greets me with genuine warmth, and in the absence of Holt's Bitter, and being a sucker for a novelty ale, I get stuck into the Bradfield crucible themed ale, after all I have been watching the snooker most of the past two weeks.  It isn't the best ale Bradfield have ever done, as you often get with stuff knocked up for an event or happening (see tomorrow's Putin ale) but certainly well kept in here.    Ignoring the fake brick wallpaper which I always dislike with a passion, I'm quite taken with the place.  If I'd not sat right on the back wall, I'd no doubt have got into a conversation with staff and the burly old buggers by the bar who smelt of CAMRA.  I can tell this because when another newbie comes in, and gets chatting with them all, I reflect on 'what might've been' for me.  As it is, he eventually wanders off to stare at a wall for 30 mins, and I'm content Shazzaming the tunes of Judas Priest, Clash, Genesis and Jimi Jamison.  Jimi who?  Please someone tell me he's obscure, cos I've never heard of the bloke!  'I'm Always Here' was the tune, not quite Melt Banana. 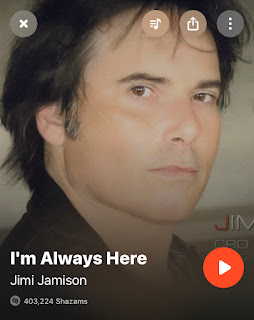 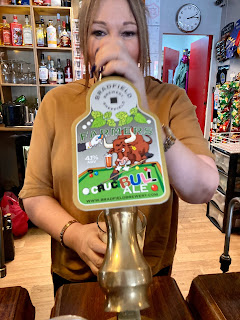 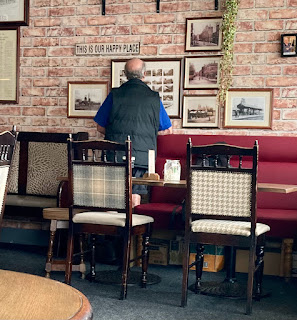 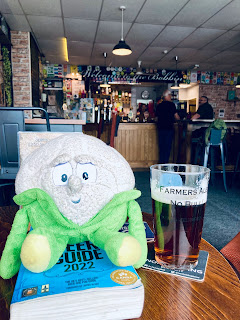 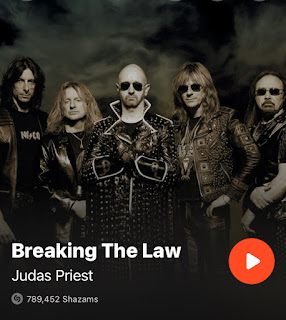 So there you have it, it is getting late so I'll stop now.  Back on Thursday to tell you about my other Leigh pub, two I can't really remember, and the four I did on the Sunday including more 'first pub of the day' mirth.
Having a week off #ThirstyThursday, as am still recovering from a 'birthday week' of celebrations.
See you 9pm Thursday,
Si