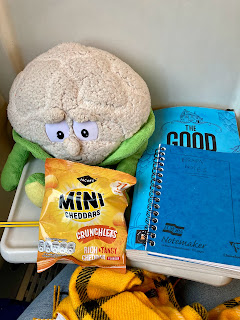 The Thirsty Thursday bugle sounded for the first time in 2022, at 2pm sharpish outside a wet and windy Sheffield station, as I looked for the three ticks needed to fully green up South Yorkshire.

I was glad to see today's BRAPA chauffeur, Christine Taylor, negotiate her way around the strange one way system in the famous Taylor Campervan, where she scooped me up from the side of the street.  Her bae, Martin, sadly could not be with us, he was on a #PubMan Piss Up in a famous pub town.  York?  Derby?  Burton?  Stockport?  Chorley?  Halifax?  Norwich?  Cambridge?  Can you guess?  No?  It was Aldershot.  Yes, Aldershot. 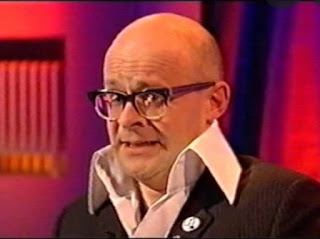 We had little time to joke about Aldershot being the Maidenhead of the Surrey/Hampshire border, when Christine dropped the bombshell that she needed a navigator who actually knew what they were doing.  'Oooh eck chief' I thought in my best Penfold voice, and quickly switched on Mrs Google Maps who was thankfully a lot chattier than she'd been on my recent Yorkshire Dales outing, preferring the bigger cities.

Roadworks outside the first pub didn't help, but Christine expertly span the giant vehicle around with all the aplomb of Hannibal off of the A-Team, and we parked down a side street, trying desperately not to block Mrs Miggins at No.54's driveway, easier said than done when you've got a stove and a toaster in the back of your big ass van.

The air was icy as we made our way to pub one, on the Eastern outskirts of Sheffield city.  Christine avoids falling in the massive hole in the ground aimed to stop idiot pub tickers visiting, and gives you a wave ...... 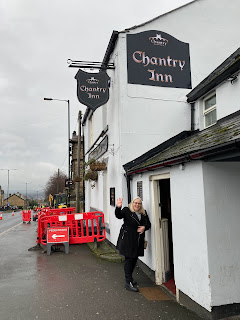 I can't lie, I found Chantry Inn, Handsworth, Sheffield East (1998 / 3561) a wholly underwhelming experience.  That's not to say in couldn't be a classic on a balmy Saturday afternoon in July, 4pm, packed to the gills with local characters, but that was never going to be that way today.  The guv'nor looked fed up, and we got little out of him as I took my gorgeous wintry Chantry ale to the far corner of the nicely furnished green room, the only customers in these early stages.  I'd probably built this place up in my mind a little too much, comparing it to the other Chantry pub I know and love, Cutlers in Rotherham, joyous and majestic.  That pub would be a top 50 all-time contender for me.  Conversation got quite heavy, including cheerful topics like gender issues, catching Covid in a vaccination centre and how dead Cambridge and York were during the first lockdown.  Colin the cauliflower was looking a bit moth eaten and glum, and when two locals (one wearing a Henderson's relish hat for peak-Sheffieldness) appeared late on to try and add a bit of 'colour' to proceedings, even they ended up just discussing whether Astra Zeneca or Moderna was the better jab.  I was glad to get out to be quite honest! 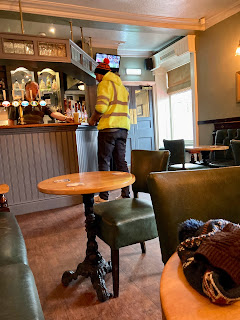 Relieved to see that Mrs Miggins hadn't stuck any angry notes on the Campervan windscreen, we set off in the direction of Brinny Brinny Brinsworth, which was the home of my penultimate tick in the previous GBG only last October Stop Inn Time.  I'd never have believed that I'd be back here, only three months later for my penultimate tick in the current edition!
Hopefully Christine didn't find me too patronising, as I said "WELL DONE!" like a kids TV presenter every time she took the right junction at a roundabout, or correctly identified an unlikely side lane marked 'private access only' which took us to our next GBG tick. 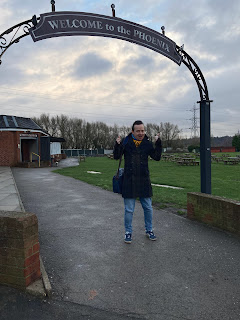 Easily my favourite of today's trio, Phoenix Sports & Social Club, Brinsworth (1999 / 3562) had us smiling throughout.  Being a club, I consider raising my GBG above my head on arrival, shouting 'ATTENTION : CAMRA MEMBER COMING THROUGH' to ensure swift service, but there was no need, this relaxed homely place would serve even the most depraved members of society, even CAMRA types.  This place felt more like a 'development' than a club - cricket pitch, snooker tables behind smoky doors, long corridors, golf clubhouse, dancing, quizzes, you didn't know what you might stumble upon next if you pushed an unlikely door open, an old lady on a bucking bronco or a bloke juggling false teeth?  Christine enquires about coffee as I hop aboard the Belgian Blue, which earns the approval of a local lady who'd driven past Bradfield earlier.  Continental coffee choices are presented, kind of sad, I thought it was a instant Nescafe kind of place, but in a great show of unity to the cause, Christine opts for a Brappacino in a large mug with one of those nibbly little side biscuits.  I give her a bag of Mini Cheddars to supplement her experience.  That should also cover petrol costs, right?  There's a healthy smattering of folk about, most notably a large group of older ladies drinking pints of Caffrey's and talking about Netflix series.  You love to see it.  The Plasma is hypnotising us both as 'Pink's Greatest Hits' play, and if Pink's videos are an insight into her mind, she is one interesting individual.  A fine club this, when I'm back in Brinsworth for the inevitable 2023 tick, I'd love to pop in again.

Back to the Campervan, we tore up the motorway until we reached the outskirts of Barnsley where Dodworth had a debutant entry I really should've done as a pre-emptive last year when a Duncan or a Jim mentioned it, especially as on the way back from Oxspring, my bus went past the entrance not even once, but TWICE!
We didn't take one wrong turning at any point of today's journey, which I'd love to say is testament to my navigational skills, but probably says more about Christine and Mrs Google Maps.
In all the mayhem, I didn't even realise this was my 2000th pub (again!) until I was on the train back to York later on.  But how would it compare with Horsham's Malt Shovel? 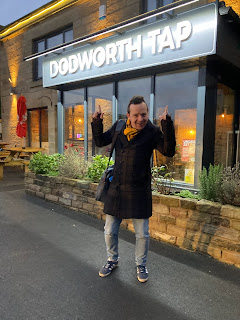 'Ugggh ..... hmmmnmm .. argh ... ooooh...eeee ' that's the sound of my brain trying to 'categorise' Dodworth Tap, Dodworth (2000 / 3563) for the benefit of this blog .  Isn't it funny how people (well, me) feel the need to fit things into neat little categories / genres?  I do it when I listen to a new band.  I do it when I watch a film or TV show.  And inevitably, I do it with pubs.   And why?  I'm pretty sure even the Dodworth Tap doesn't even know what it is, and it probably doesn't care.  It's smart, they've made an effort.  It's a bit glittery and sparkly which is a bit off-putting.  It is scruffy smart though, you get a proper kind hearted Barnsley welcome from loud real-life people who look at you when they speak to you.  The beers are too normal for it to feel like a micropub.  It has the weirdest fake fire with slivery little wisps of flame.  Most folk in here are woman on pints, again!  In fact, everyone 'saving the pubs' in early Jan 2022 is a woman between 30-80 yrs old from what I've seen so far this year.  The place smells vaguely of chlorine.  Not enough to be overpowering, but definitely gets into your nasal passage when you go in for a sup of ale.  Christine's half a Jaipur tasted weirdly weak, but also like it'd been dredged off the ocean floor.  I blame the Colmore.  Get over it Si.  My cask Stones is much nicer.  £15 for a Ploughman's?  Errrm, excessive much?  In fact, the whole pricing policy is all over the place.  Someone on Twitter sent me a pub menu, including a bottomless brunch you have to take a mortgage out to afford.   It's a bit of a split personality pub this, but at least a memorable way to get the county 'greened off' for another year. 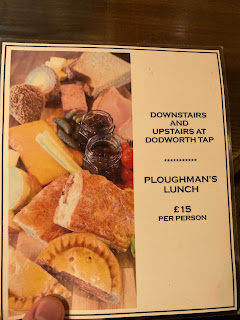 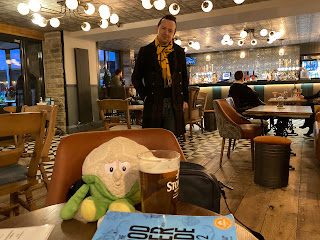 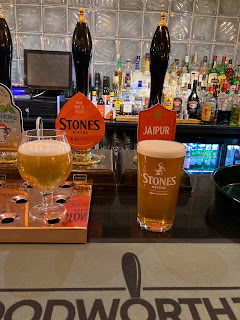 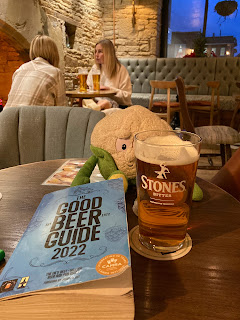 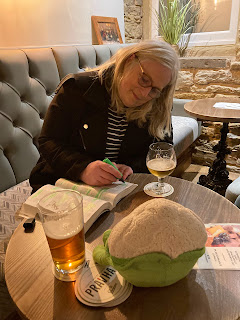 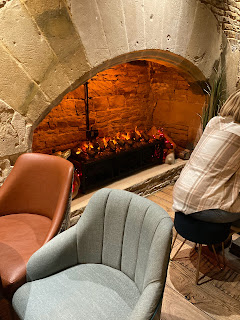 After a bit of debate regarding whether I'm better off dropped in Barnsley or Sheffield, I decide on the latter, thank Christine for a fantastic afternoon/evening of ticking, and with 20 minutes until my train, just time to pop into Sheffield Tap for the first time in years for a swift half.  Nice enough in a sticky station tap kinda way, but not the Rutland or Big Gun is it? 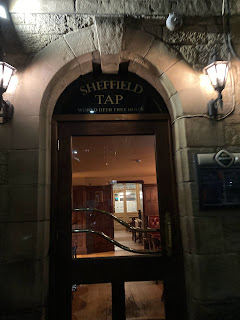 I'll be back on Fri/Sun to tell you about a productive day of mostly micros in the Stoke area, or if you are a Twitterer, look out for me tomorrow afternoon in an unlikely GBG town/village I've never been to before.

Take care, and thanks for reading!