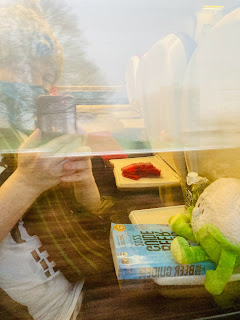 I might be neglecting my southern counties of Herts and Hants in these early weeks of 2022, but on the plus side, North Yorkshire and Staffordshire are receiving much attention from the Green Stabilo.

Although to be honest with you, I'm thinking of ditching Stabilo for Staedtler in the coming months as they continue to refuse to sponsor me, or even embrace the free publicity I'm bringing these ungrateful second rate Germans.

So now I've burnt those bridges, let us tell you about my latest Staffs adventure on Saturday just gone.

Birmingham New Street was the predictably depressing starting point.  My train from York pulled in on platform 12, my connection 6 minutes later was from Platform 2.

At any normal station in the UK, that wouldn't present a problem.  But in BNS, it meant moving from one zone to another.  It was like the Crystal Maze.  But not a fun zone like Aztec or Medieval, more Ocean or Industrial.  It was only by dint of my connection being delayed that I made it, and it was only thanks to a helpful stranger that I didn't end up spending the day in Wolverhampton. 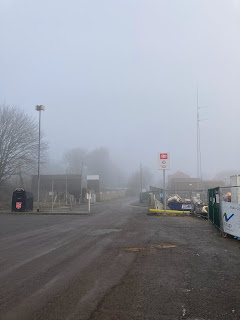 There was something vaguely apocalyptic on my arrival into Rugeley just before 11am.  I peer through the dense mist where groups of even denser looking Neanderthals huddle together on platform edges and street corners, supping cans of high strength low value lager, Man Utd and Aston Villa scarves pulled up around their jutting chins. Gorillas in the Mist 2022 reboot?

Could our first pub put me at my ease and help me view 'The Ruge' (as I'm sure the locals call it) as a softer, more cuddly place? 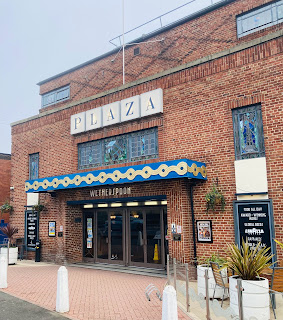 I feel 'centred' when a BRAPA day begins in a Wetherspoons before 11am, it gives me a similar 'all is well with the world' feeling I get when I'm supping my ESB in Parcel Yard at 7pm after a South Eastern trip.  Plaza, Rugeley (2009 / 3572) accentuated that feeling by being a former 1930's Art Deco cinema, possibly the most rewarding type of 'Spoons.  Conscious of the woozy state I got myself into post Newcastle-under-Lyme, I scan the bar for a low percentage starter and make the classic schoolboy error of ordering a 'Coming Soon' beer (why do Spoons show these, whyyyy?  So damn annoying).  In the end, Betty Stoggs will have to do.  She's less buxom in the cleavage dept than last time I saw her in Piece, a rural Cornish outpost, which might either be to do with 'sexism in pumpclips', or a breast reduction due to back pains like a lady at my work was considering.  Whatever, #WokeSi2022 approved and doesn't forget to hand over his 50p Mudgie voucher.  The bar area is deservedly packed, so I take my ale up a spiral staircase which offers a better perspective of this grand place.  A large clear window to my right is where the cinema screen used to be.  Me and Col are sat in the sort of position Statler (not Staedtler) and Waldorf off the Muppets would be sat.  It is Colin's return after his quarterly wash, and apart from a brief 5 minutes, he remains concealed, terrified of the sheer volume of young men with neck tattoos and paint stained overalls treating their 11 year old lads with crew cuts to Full English Brekkies.   Photography isn't easy, there's not a lot of 30's art deco appreciation going elsewhere, but overall, this was a great way to start any pub day. 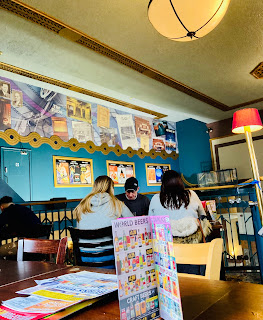 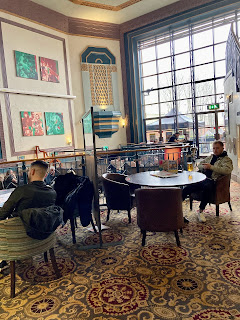 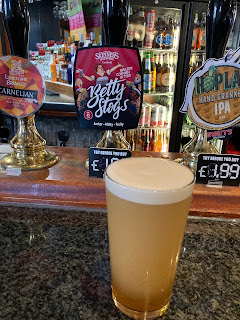 I've made a faux-pas in the planning, realising one of my other Rugeley pubs doesn't open til 2pm.  As it is only 11:30am, and a train is imminent, I decide to shuffle off to Cannock now, get both 12 nooners done, and then come back up here later, fill in the time as best I can.

More big groups of men, without tickets, arguing with guards, talking about 'getting smashed', are littering up the place, and I'm relieved when I walk off at the noticeably more genteel Cannock and follow the other alighting passengers ten minutes into town, negotiating a subway with the kind of horrific daubed street art which I really should've photographed if I was a better pub blogger.

The two GBG ticks in Cannock this year are practically next door to each other, but still #BRAPARules that you do the furthest one away first.  Took a bit of finding, due to odd Google Map plotting. 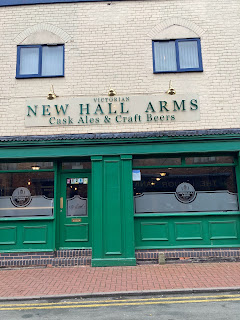 And he opens the door, and welcomes me in!  What a nice start at the New Hall Arms, Cannock (2010 / 3573) or Newhall Arms without a space depending which source you look at.  If it wasn't for the one customer at the bar, I'm convinced I'd have loitered and got into conversation with him.  Beer of the day is here, by Shiny of Derby.  Kept in immaculate condition, look at those lacings.  A brewery I've often coveted, but had forgotten existed until recently.  Perfect timing too, as I was wanting a brewery I'd not ordered from before for Daddy BRAPA's birthday ales, and providing he doesn't read this before 27th and I haven't spoilt the surprise, Shiny is the one.   The place itself left me a bit cold, literally not much heating or light, not helped by the lack of bodies, but it is fairly soon after opening time so we'll cut them some slack re 'circumstances' because I want to be kind to this place.  And if Colin had needed his nappy changing, it had one of the best baby changing stations I'd witnessed in recent BRAPA history. 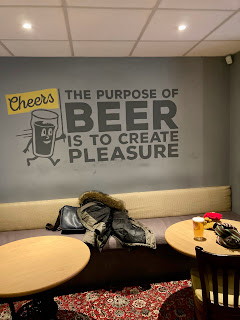 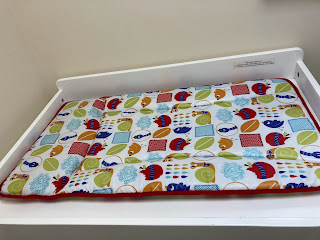 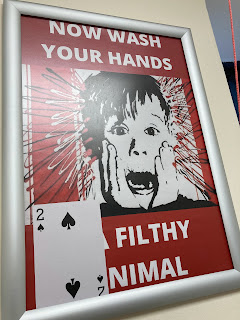 A quick sprint around the corner like the Olympic sprinter Mr Christie (not the bloke who's done up Zetland in Middlesbrough), I reach my second 'Spoons of the day ..... 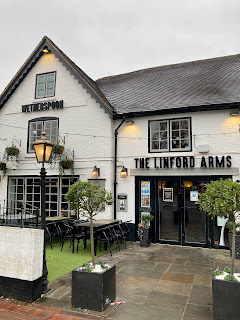 This part of the world is seriously blessed with some well above average Wetherspoons, first the Plaza, now came this beauty, Linford Arms, Cannock (2011 / 3574) which had such a 'traditional pub shape' rather than your long sweeping floors , it not only confused me, but gave me a long forgotten flashback to a 'Spoons I visited in Barnet called the Railway Bell.  The nooks, crannies, and awkward tight edges meant I was constantly breathing in, as a procession of thirty stone Staffordshire Manatees lumbered past me looking for cutlery, cakes and coffee machines.   My eyes lit up at the sight of Titanic Plum Porter, right next to the Doom Bar, but I was never tempted to be contrary, and TTP in top condition for £1.49 a pint is a thing of joy, make no mistake.  Again, I found myself climbed a staircase to get away from the crowds, and again, my vantage point allowed me to appreciate the vaulted ceiling.  It was warm and secluded in my corner by the radiator, even if a bloke got his tattooed guns out and strutted around the pub to stop me forgetting it was 'Spoons completely, and yes, I know 90% of #BeerTwitter would choose the New Hall over this, and the Shiny was ace n all, but I preferred this pub experience ....  so shoot me (just not with a tattooed gun, cheers). 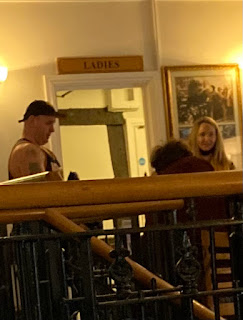 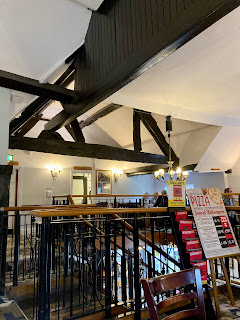 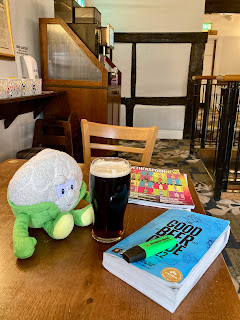 So there we go, back off to Rugeley for pubs 4 and 5.  Then Great Wyrley (whatever that is) for pub 6, and a Brummie bonus to finish with late on.

I'll tell you about them in part two. but no idea when that will be because for some bizarre reason, I've got Thu, Fri, Sat, Sun, Mon and Tue all booked up - three BRAPA's, three others!  Dunno how these people do Dryanuary, always seems to be too many good reasons to go to the pub to me.