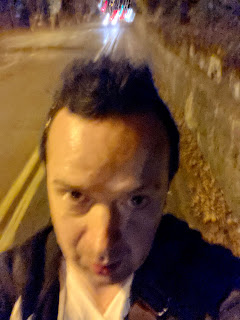 Walking down the mean streets of Stafford, on Thursday two weeks back, I wondered how many of the seven GBG entries I could get greened off before last orders bells pealed across the town, or is it a city, who knows these days?

Quick word on my Travelodge I'd just checked in to.  Very Fawlty Towers.  Not one light outside, well I think the second 'e' may have been flickering.  I step over a crying old woman on a zimmer, a wheezing old bloke rises up from behind the reception desk like a lumbering whale.  "Name?"  "Everitt"  "Not Kenny is it?  HAHAHAHA"  Oh, we have a joker.  "FOUR nights?  In Stafford?  What possessed you?"  "Pubs" I reply.  Now he perks up.  After explaining the lift is broken, and my key card probably won't work, he recommends me the Sun Inn (in my GBG) and the two Wetherspoons.  He looks like a 'Spoons kinda chap.  I thank him, but I know time is of the essence, so I run away into the cool night.

I've drawn myself a little map in the hope it'll help: 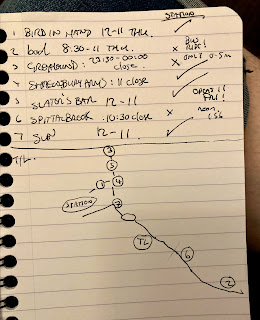 I head for the furthest north pub first, considered 'out of town' as you have to cross one the million crazy roundabouts.  Rarely have I been to a more pedestrian unfriendly town than Stafford, messy. 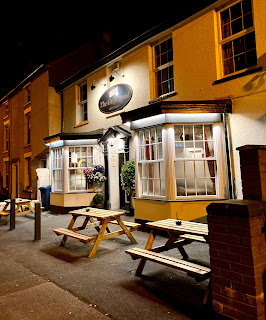 I love a bare, basic, no frills pub as much as the next #Pubman, the Greyhound, Stafford (1963 / 3392) was so much this, I found myself feeling it was 'lacking' something.  Atmosphere?  I just found it impossible to fall in love with but recognise it as a good solid boozer.  Two bored lads in the front bar were watching some unspecified European football match, and with no staff in sight, I make my way down the warren of back corridors to the back bar, where I find a barmaid telling a friendly hairy dude (FHD) about her new boyfriend in slightly embarrassed tones, a short arse electrician I think she said.  The ales were all South Yorkshire, like the remnants of an SY themed festival, Acorn and Bradfield available so I went Farmers Blonde which was fine, but not Bluebell York quality.  A big group of 'ladz' came in from an outdoor smoking sesh, and started talking about drinking 16 pints in Malaga and not feeling a thing.  I think they meant they stayed sober.  Their laddish one upmanship made everyone feel uncomfy, and you could sense the relief in the room when they left, "if you're gonna finger me Ben, do it properly" being the last thing I heard from them.  Colin was cowering.  This whole episode must've made the barmaid morbid.  "I'm sure that cellar is haunted" she comments to FHD, adding "you could dump a dead body down there and no one would know".  Two massive bald blokes with shiny heads then point at each other and bellow "JUDAS!"  It seemed to be done in good humour, so I laughed along, taking my lead from FHD and barmaid.  Of course I got lost retracing my steps to the front door, so pretended I was looking for someone in a different room!  Think I got away with it (I didn't). 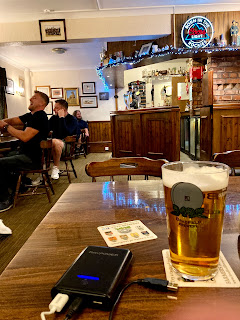 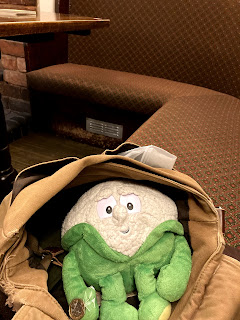 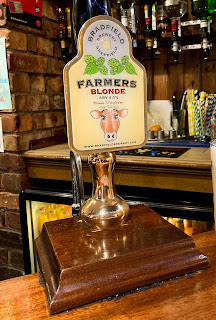 Back into the pedestrianised part of town, and you can tell Thursday is the new Friday cos everyone is falling out of McDonald's screeching and hysterical like, all shits and giggles, which happened to me last time I had a McFlurry too.  Again, I join in a bit, wanting to look like a Stafford local.

Before we got to that though, we come to this nifty little place on the left hand side ...... 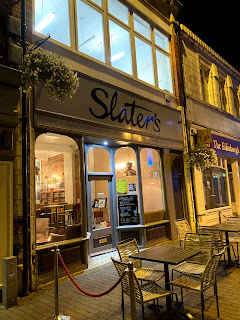 The strange shape and extreme ceiling height makes Slater's Bar (1964 / 3393) feel a lot more like a clothes shop than a boozer, but at least affords it a bit of unexpected character.  Not sure you'd class it a 'micropub', but the atmosphere is exactly what such an establishment dreams of.  That is, strangers communicating passionately on a range of inconsequential subjects (which is polite BRAPA speak for talking bollocks).  Pretty much all of them turn to say hello as I approach the bar, I appreciate such stuff, and barmaid of fabulous blue hair serves me the obscure 'Amarillo' ale without a proper pump clip.    When me and my mate visited Shrewsbury in 2005, we voted Slater's Top Totty our ale of the week.  We've never forgotten it.  But in 2021, no surprise it doesn't exist anymore, and probably not the time or place to lament its passing!  Assume it has a new name, I wonder which it was.  The chat is music based, and although I approve of main shiny bloke's (the blokes are very shiny in Stafford) critique of the Beatles, I react less kindly to his Sex Pistols slagging.  "But we wouldn't have My Chemical Romance without them" he muses.  It's gone very quiet, I fear he's lost the room.  An old dude with a skateboard, head scarf and fingerless gloves is rocking backwards and forwards, silently at the back of the room.  A new group arrive.   One man explains it is his anniversary today.  "My wife has sent me here for my anniversary present .... on my own!"  I'd be worried if I was him.  A previously popular bald visitor (also shiny) has a sneezing fit and with each sneeze, you could see people getting more and more peed off.  Pubs, you do see life don't you? 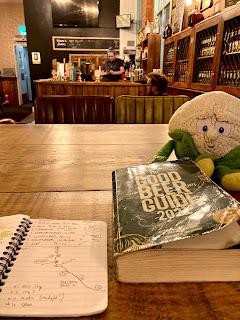 Carrying on our little trail through town, around a couple of corners, and pub three was in sight, just away from the main drag. 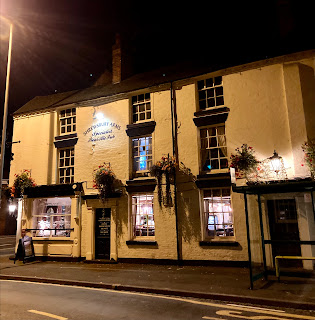 Shrewsbury Arms, Stafford (1965 / 3394) as it turned out, would prove to be my favourite of the seven Stafford GBG entries.  It didn't do anything spectacular, it just did everything really well.  I didn't think this would be the case when I'm confronted with a plasma listing the ales!  It really wasn't this type of pub, and at the time, I wrote "the plasma can kiss my ass" so it had obviously ruffled my feathers, or triggered me with salt on the top, as the kids probably say.  The lady who serves me was fantastic, super friendly but not overbearing.  Just good old school hospitality.  I like being called "darling" and "sweetheart" by pub staff, it's kind of heartwarming!   She encapsulates a very happy pub atmosphere, the Beatles theme continues with a group of old blokes (with ponytails and funky shirts) in the corner warbling "Hard Days Night" as they've done at 10pm on a Thursday every year since 1962.   Then, the baldest one had a sneezing fit!  But such comparisons with Slater's were merely superficial, this was a carpetted old school boozer of very different proportions.  It is a Black Country Ales pub so I get a pint of their mild.  Definitely the right thing to do.  A trip to the loo convinces me not to perch on a high stool, but to go round the back of the bar by the board games, on some nice green bench seating, "this pub has hidden depths!" I say to a passing bloke, who never asked for BRAPA commentary.  A giant group of women over 60 arrive, sit near me, and get on the Prosecco.  Time to drink up and get outta here. 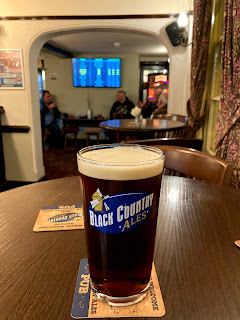 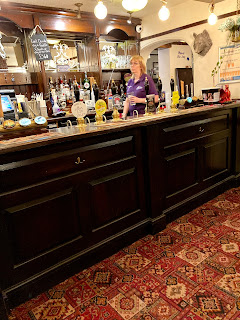 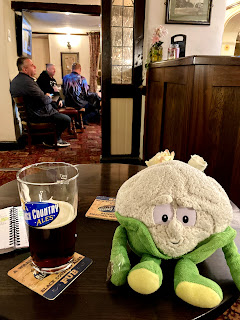 No, of course I wasn't running away from scary older ladies!  I didn't want that last orders bell to scupper me, as I scoot back in the direction of my digs, where I've already seen a GBG pub situated in that nice crumbly Wensleydale cheese style. 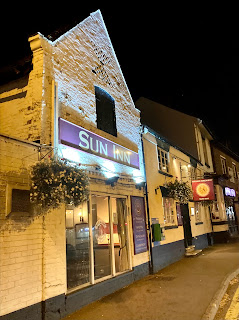 And I'm relieved to see the Sun Inn, Stafford (1966 / 3395) in full swing .... well in that kind of 'definitely still open, lively, but a few signs that things are slowing down' stage of the night.  A Titanic pub I notice, and after that gorgeous Mild, I only have one ale in mind I want, and it rhymes with Brum Snorter.  But where is it??  A bank of solid Titanic bitters adorn the bar.  The staff see my panic.  I move left.  Lagers.  Ciders.  I keep going, staff following me like I'm the Pied Piper of Braplin.  Guest ale, guest ale, another guest ale .... and there it is, right on the very far end.  Plum Porter, phew!  The staff look at me like "well done for sticking with it, you got your reward in the end!"  So why do it?  Is it so popular, they want to put people off draining their precious reserves?  The Titanic barmaid in Stone the following day told me such a theory is bollocks.  Well, the front door is open, and I'm on the seat nearest, which is a bit annoying, but folk keep telling me best have air circulating round pubs 'in this day and age' so fair dos.  I get that, just don't think open doors do much for a pub atmosphere, which already feels slightly transient.  "We're calling last orders soon, if you want another Plum Porter?" says the barman.  Flippin eck, I've only just started this one, who do you think I am, Alan Winfield?  He looks a bit confused (I didn't really say that).   Nice pub, but probably not the best time to experience it. 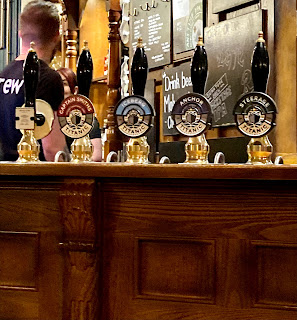 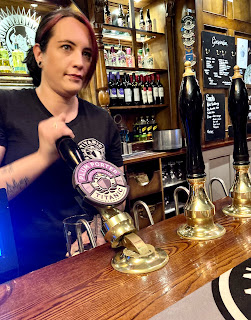 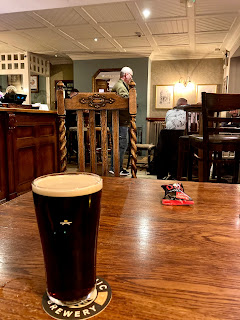 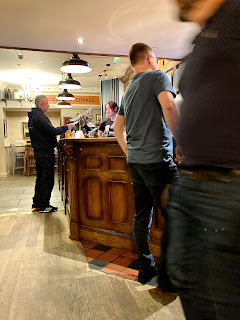 So there we have it, not very likely my remaining three Stafford ticks stayed open til midnight, so I cut my losses and called it a night.

Big day tomorrow, getting out to more rural climes, quite surprised so far I'd not seen Bass in one pub, but maybe not when you consider the pubs I'd been to!  Am sure it'll be rectified tomorrow.

Join me on Wednesday where I tell you about my six pub Friday.