Sorry for the lateness of the hour, I've been imbibing in the Swan and Slip in York, two lovely pubs, and lost track of time.  If you love this blog title, please give credit to a Mr Martin Alsop.  He's a simple man, buy him a pint by way of thanks,  here's what I wrote last night .......

"Daddy BRAPA will be relishing next Saturday where he gets to go to 'OnlyHull' (it is like OnlyFans but less sexy) and can just spend a leisurely couple of hours drinking in one single boozer, before trotting off to the MKM whatever-it-is-called-nowadays stadium to watch the latest miserable defeat.

This after a third consecutive BRAPA Saturday of back breaking pub proportions.  Horsham / Littlehampton seemed a tough day at the time.   But was nothing compared with Uttoxeter day a week later.  And now, we had this, North East Wales.  Which was supposed to be Crewe, but wasn't.

The highlight of the long, but not overly arduous journey was a stop in Manchester Victoria for a BRAPAcino and some healthily buttered malt loaf to warm the cockles. 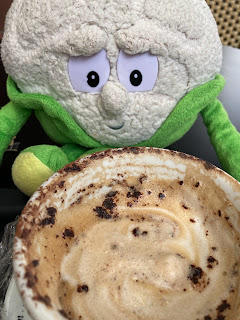 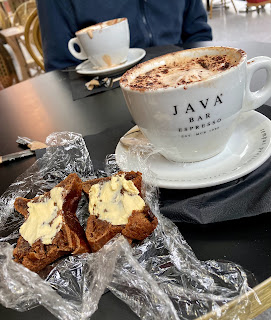 Rhyl was our furthest point west, and we walked to the furthest of two pubs, about a 15-20 minute walk from the station, timing it about right for 12 noon opening.

What a shame then, that it didn't.  SHUT PUB ALERT! 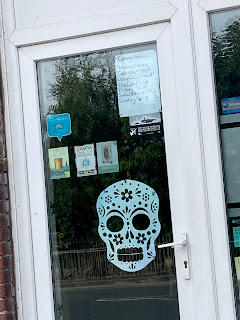 Google confirmed these exact stingy micropub hours at the Dove at Rhyl making me think I'd not been diligent enough in my research.  Still, I'll have got 12 noon from somewhere, but in pub planning, the last few months have told me you can do worse than to treat Google as your most accurate source, especially if the pub's Facebook is inconclusive.

Google Photos is more annoying, failing to acknowledge that pubs are my main hobby .... 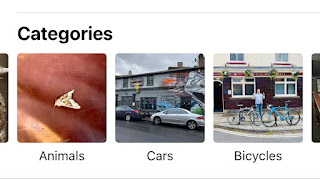 Opposite the station, the other Rhyl 'tick' was so open, it was positively gaping ...... 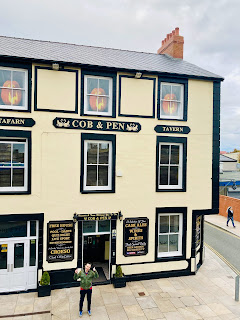 And a strong contender for pub of the day too, Cob & Pen, Rhyl (2013 / 3442) was a just a great all rounder - strong in every category.  When you walk into a pub and there's a group of old blokes who look like they've been here since 6am, it is always going to be a pub to rise above mediocrity.  Bit of a joke with the barmaid about forgetting how to pay using actual cash, exchanging nods with a chap called Malcolm, definitely in the top 20 of reassuring pub bloke names.  I went for a pint of Hop Kick, I wasn't a fan, it had a weird hoppy kick, kinda seemed churlish to complain given the name.  Chelsea and Norwich are about to start playing football, a respectful minutes 'applause' for Jimmy Greaves ensues as beers are swigged, just how he'd want it, although my phone changed his name to 'Jimmy Graves'.  There are snugs and side rooms leading off in all directions, lush Welsh tiling, I learn 'Tafarn' is Welsh for Tavern, making it my third Welsh word I've learned after Heddlu and Toiledau.  Malcolm asks 'where to next?' and when I say Prestatyn, he says "you can't go wrong, it is one street".  I say "Malcom, can't stay to chat, Daddy BRAPA has left the building".


Back on Rhyl Station, Dad had been debating whether to become a Tik-Tok star on the train over, makes me film him doing a 'Pressed Hat In / Prestatyn' joke which moved everyone who saw it on Twitter to hideous tears.  "You might go viral" I told him.  He looked scared and pulled his facemask back up.
Malcolm wasn't kidding.  Prestatyn was one main street, a bit more colourful and vibrant than Rhyl which isn't too hard to achieve.  A long street though, plenty of quirkiness, Hallowe'en definitely approaching by the looks of it, should've brought new mascot Pumpy if I'd known everything would be so garbed in pumpkinny stuff.
Dad was using his brand new phone to direct us, using Google Maps and remembering the training session I'd given him in Uttoxeter a week ago.  Apart from a left turn, it wasn't a tough one to find, NOT the next pub had much in the way of signage to suggest it was anything other than a low key hotel ..... 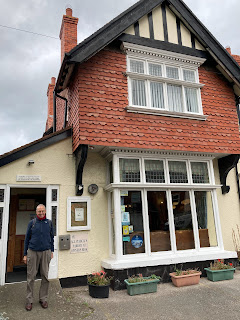 Halcyon Quest Hotel, Prestatyn (2014 / 3443) is the rather fabulous name, and surely people must call it the H.Q. and then wink at their nearest cauliflower.  A bloke sat all alone in the middle of the room watching Pensioners maul Canaries looks up and says hello.  'Friendly punters' I make a mental note, but then, he jogs around the bar to serve us!  Same thing happened on the way with a young lad propping up the bar.  We return our glasses, I'm like 'poor bored looking lad' and then he says 'cheers gents, enjoy your day!'  I've said it before and I'll say it again.  Pubs where you can't distinguish staff from punters = instant classic.  In fact, this was the only pub today to rival Cob & Pen, and in my view, probably edged it.  Warm atmosphere, hotel bar doesn't do it justice, pub all over.  A boat on the ceiling above us says J.R. Hartley's Fly Fishing.  I wonder if it is the one from the Yellow Pages advert.  Was there one actually including a boat?  Or was it just a codger on the phone?  In keeping with a rather unfortunate theme today,  the ale was again well kept (top lacings!) but I just didn't like the flavour.  At least being called 'Glas Haf Fwll', I could hone my ever burgeoning grasp on the Welsh language. 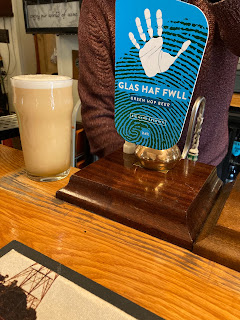 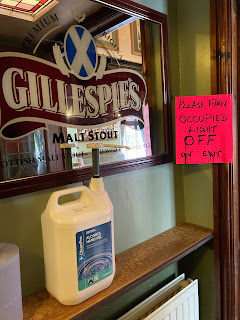 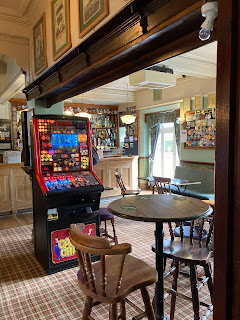 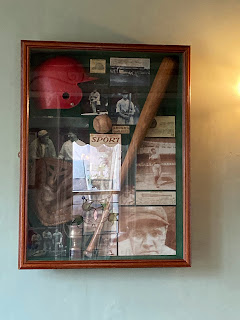 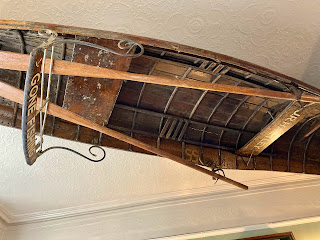 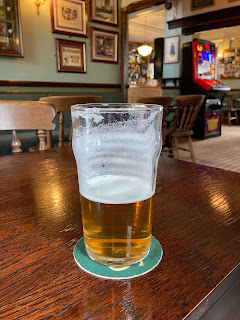 Dad used a dangerous combination of Google Maps and his imagination to get us to our other Prestatyn tick which was close by.  He must've not liked the look of it from afar as he asked me to stop for the obligatory outdoor photo before we'd even crossed the next road!! 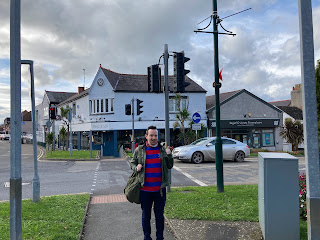 Bar 236, Prestatyn (2015 / 3444) was actually 'Two 3 Six' when you get to the building, which kind of gave me a sad headache.  A little 'reception desk' blocks our progress, but the best staff member of the day, a sort of Rylan Jordan Henderson, lets us approach, corrects my assertion that Big Hand are from Chester (Wrexham actually Si you nob) and serves me my third excellent condition pint, which again is not enjoyable due to the style.  I am questioning whether I still liked real ale at this point!  This bar was a throwback to the pre Micropub GBG days that came along circa 2011.  Don't be fooled that prior to this, the GBG was wall-to-wall pubs full of old tosspots in flat caps supping Flowers whilst smoking twenty woodbines and playing dominos.  No.  I remember plenty of new entrants circa 2002/3 like this.  Knight's in Hartlepool stands out.  Sun shining in through huge windows, clomp clomp clomp of heels against wooden floors, an array of 12 giant silver lager and German beer fonts, with two local handpulls with drawn on pumpclips.  No one ever knew who brewed them.  There was always a young woman sat alone drinking red wine with a dog, letting it play with her frizzy hair as a fake dog toy.  OutKast and Linkin Park tested the questionable acoustics.  Women discussed how their Atkins diets were going, laden in ponchos.  Pimply 17 year olds in outdated Kappa would appear and nervously order Fosters.   Okay, so Bar 236 was a bit toned down for 2021, but you get the gist.  My favourite bit?  No one gave a stuff about Chelsea, but instead, streamed out as one disgruntled mass once full time sounded in Cardiff 0-3 Middlesbrough. Warnock v McCarthy?  Great to see a new generation of football manager coming through. 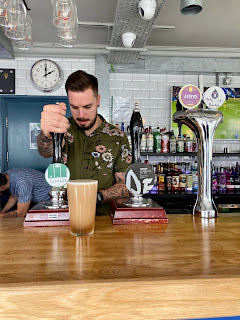 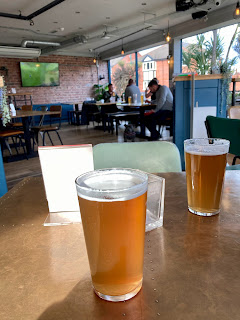 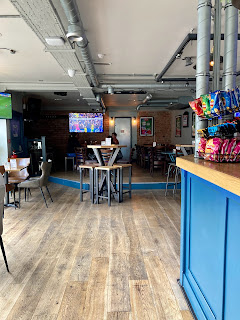 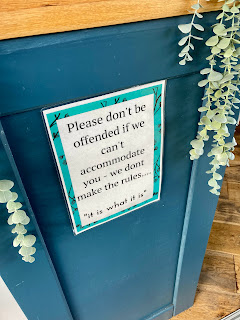 It was time to say farewell to Prestatyn, I have to say I thought the town had a really nice feel.  We'd reached the halfway point, and were at a crossroads in the day.  Decision time!
To find out more about that, join me tomorrow for more tales of BRAPA North East Wales."
Si
Posted by Si 'BRAPA' Everitt at 11:00 pm