BRAPA and .... HANGING (HEATON) ON THE TELEPHONE (VACCINATION PART 2/2) 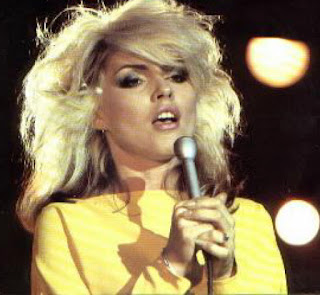 Welcome back.  I'm writing this whilst drinking a beer (Dartmoor Jail Ale).  This is only notable because I normally write BRAPA blogs completely sober, which I suppose might come as a surprise to you.

Where were we?  Oh yes, Bradford.  I'd had my first Covid jab, and the effervescent Martin Taylor met me outside the vaccination centre, with the view to drive us to two or three new Good Beer Guide pubs.

And he wasn't lying when he told me the car wasn't parked far away.  Not up a hill five miles away, de rigueur in my experience of the golden age of rural Cambridgeshire ticking with the man.

The car itself, not the typical Martin mobile, but the sleeker, svelte, sportier @Christinet50 mobile.  No wonder the gentle folk of Bradford (probably) doffed their caps on every corner as we powered north towards Otley.

Having no railway station is a fact I cannot quite accept about the town.  Feels so much like it should.  It probably explains why Otley feels like a town 50% comfortable in its slightly old fashioned, unspoilt West Yorkshire splendour, the other 50% casting a nervous eye in the direction of Burley-in-W. and Ilkley, wonder if it should embrace blousy, flouncy, nose in the air posh 'prettiness'.  You are great as you are Otley, trust me, don't change.

As we walked towards our designated pub, Sylvanian Family figures stood in a gleaming toy shop next to a throbbing Chinese takeaway called Dragon City.  It just felt, you know, kind of proper. 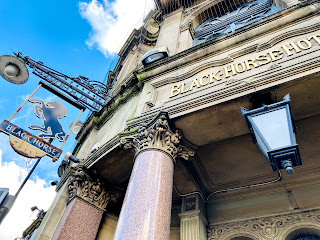 Black Horse, Otley (1740 / 3169) is an impressive old coaching in which we could get absolutely no sense of the grandeur or scale of due to the current outdoor only regulations.  It was huge.  The courtyard which we were funnelled into, a long way from the entrance in the above photo, had the original stables and seated many.  The blackboards all screamed at us to put on masks whilst stood up, do Track & Trace religiously blah blah, but the one thing it omitted was how the bloody hell you get served.  As the pair of us scour the landscape helplessly, wondering how the many jolly couples gathered around us ever got a drink. Martin is first to realise the tiny QR code on our table (913, just how big IS this pub?) can be scanned and used to order drinks.  Owned by Kirkstall now, whose beers I adore, I go for a post-vaccination restoring Black Band Porter.  The lad who brings it out is so lovely, he simply does not get Martin's gently barbed comments about whether the App is really worthwhile when actual human beings might be quicker.  The 'jolliest man in the world' sat behind us is apoplectic in his rage/laughter.  Black Band Porter wasn't on when he ordered, and now it is.  His favourite too!  "I'd offer you a sip normally but not in these times, ho ho" I tell him, obviously lying through my teeth.  Having such a dry sense of humour, Martin tells me the music I can hear is by a band called ELO (?), a punk forerunner to the UK Subs where a young 52 year old Charlie Harper first cut his teeth.  I think he might be joking, but I cannot be sure.  A great 'tick' but if I wasn't already chomping at the bit for 17th May indoor BRAPPING, this pub would've tipped me over the edge!  Frustrating. 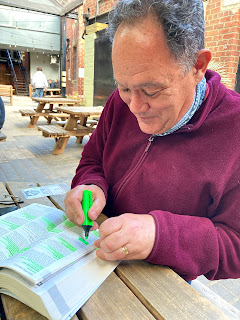 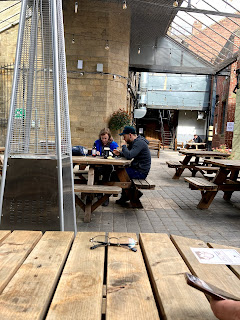 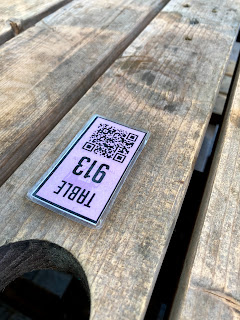 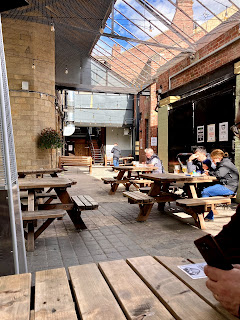 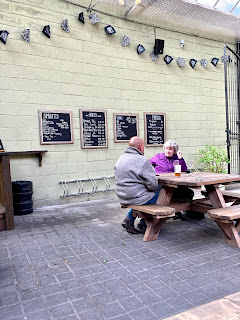 Onwards and upwards, well uphill anyway, through rush hour traffic to the outskirts of Keighley, where we find the village of Riddlesden.  One minute, the rain is teeming down in buckets and spades, and the next the sun is out.

This makes us nervous as our next pub's Facebook page is a constant flow of 'just started raining, we're shutting!' perhaps a bit too reactionary for a pub tickers liking.

The scenery feels to both of us, more East Lancs than West Yorks, I'm put in mind of Mossley with the stone buildings and winding, snaking roads up steep hills.  The blackbird above sounds more like Quosh than Chris Dyson.

The sun is out when Martin crunches the gears, and the car comes to a stop opposite the pub.  Three locals under an umbrella glare at this strange incursion into their town.   Martin doesn't notice, for he has lost his phone!  He's not panicking though, he's SURE it isn't still in Otley.

He instructs me in the meantime to go and work out the craic and order the drinks (tactics?) 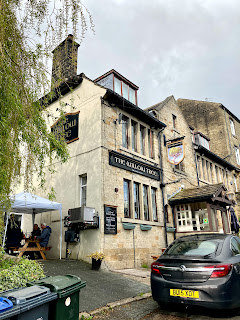 A quick loo trip (gosh I was busting!) allows me to walk right through the pub, so at least I feel I had some appreciation of the indoors of the Yew Tree Inn, Riddlesden (1741 / 3170) and Martin isn't far behind, clutching his phone triumphantly.  I order a pint and a half of something 'Airedale' and tell her we're going to sit down in the 'lower' beer garden, 'twixt running stream and jagged rocks, a young cat frolicking around nervously in the sun.  This is a quite wonderful backdrop.  The staff are attentive and friendly, shouting through the trees, over the stream "are you two okay for drinks?" like a cowboy bellowing into the canyons (or whatever).  So why the charlie dickens has this pub never appeared in any of the previous Good Beer Guides whilst I've been doing BRAPA?  Oh yeah, the beer is poor quality.  Bit of a drawback that for a GBG entry.  "Hmmm, honey & thin?  On a bit too long?" muses Martin, making an early play for Beer Sommelier of the Year 2021.  He is encouraging me to drink up in the politest way possible, I have been nursing this I must admit.  I notice he's on the phone.  I assume he's asking Mrs RM to ensure his tea is on the table when he gets home.  (Errr, nope, that'd be brave/foolish).  He's actually ringing the Hanging Heaton Cricket Club to ascertain whether they are open.  Legend!  I never ring pubs.  Or Cricket Clubs.  Far too sensible!  A second loo trip before I go.  My jacket scrapes against the wall where the young cat is now sat, terrifying it.  I apologise and glance at those men.  Two of the three men finally smile, one almost chuckles.  The third remains frowny and starey and pointlessly intimidating.  I'd forgotten how rude random shit strangers can be.  It's kinda life affirming.  More evidence the BRAPA 'roadmap' (roadbrap?) is tantalisingly close to returning full time.  4 'sleeps' all, we've got this!


So, we'd vaguely looked at a nearby North Yorkshire GBG tick in a place called Sutton-in-Craven but after his Heaton heroics, it was time for a 19 mile drive that would take 45 mins, pray for the BRAPA bladder!

Back down through Bradford, we passed all those weird places my work colleagues live like Birstall and Batley, did some weird arcane chicanery underneath a monumental railway viaduct, reversed up a hill, got scowled at by Mrs Miggins in no.22 having her tea, and crossed the road to the cricket club, high above Dewsbury.

You could have imagined yourself being anywhere in the world.  Apart from Dewsbury. 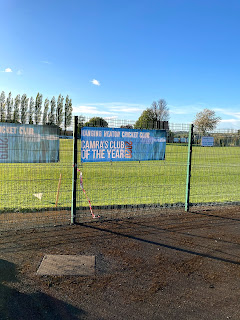 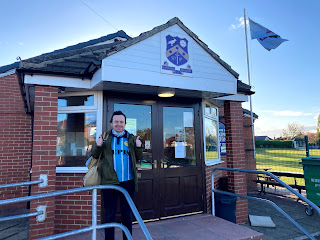 After fathoming out the fastening on this giant metal gate where the loos were lurking, I relieved myself readily and went around the corner where I found Martin at the bar hatch chatting with the wonderful 'mine host' who didn't even mind appearing in my photo below.  Farmers Blonde is a cracker when kept well, crystal clear quality, and this was an example of a place that knows how to do GBG worthy ale.  "How is it?" he later came over to ask us.  To which I replied "lovely nice", not sure what I was trying to say but it wasn't that.  Hanging Heaton Cricket Club (1742 / 3171), I'd recommend it muchly.  A fact I learned on 12th April is that Martin has a bit of a knack/reputation for the sun coming out wherever he goes.  We'd had so many storms forecast today. I really think he might be some kind of sun god.  He's even seen the sun in Manchester, he claimed.  A bold claim.  I'm still waiting and I've been 57.5 times.  Facing out onto the cricket pitch, simply glorious, even if the air was turning a bit more chill as we reach 8pm.  Fluffy Hoody Ladyy, behind us with Hubby, had already smiled a few times and finally asked what my Good Beer Guide was.  "It looks an important book, that one!" she shouts into the wind.  And she isn't wrong.  So I gave her quick run through of our West Yorkshire progress.  It was a nice ending to a fantastic Monday's pub ticking, I cannot thank Martin enough, and glad we saved the best one til last. 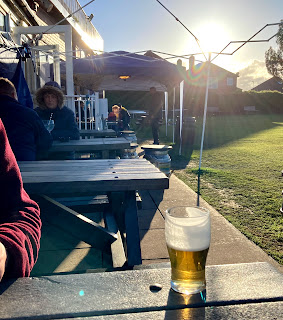 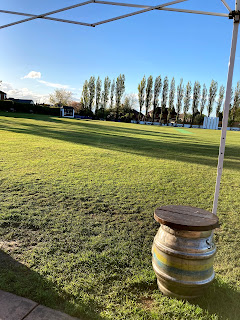 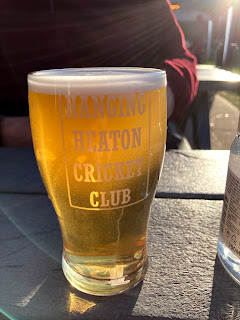 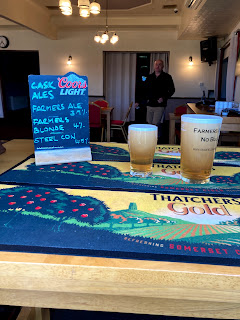 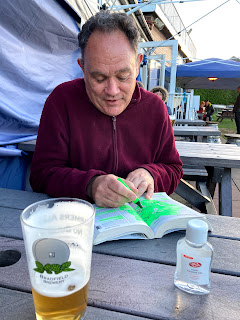 Martin drops me back at Dewsbury station, where an outdoor West Riding Refreshment Rooms revisit couldn't quite tempt me, and before I could blink, I was back in York where I quickly had to remember to jump off, before I woke up in Oban or Wick Academy again (jeez!  these Transpenine trains, so misleading).

I thought I'd avoided any vaccine side effects, for I woke up at 3:15am for a wee, 12 hours since the jab, feeling fine.  Logged on for work 8am, telling everyone how well and indestructible I felt.  Mocking my sister who'd suffered flu like symptoms for a day.  And THEN, about 1pm, I'm training a staunch L**ds Utd fan on a new work process and I start feeling achey.  Then shivery.  Then chest pains.  By 4pm, I'm a mess!  Straight to bed.

So I wonder, just wonder, did those three pints stave off the side effects for longer?  If so, I made one vital mistake.  I stopped drinking,

Thanks very much for reading.