Caterham's King & Queen had been lovely, but there was little time to linger, even with a belly full of ESB.  I waddled towards the station and after a bit of jiggery pokery at the Purley gates, I soon found myself in that most 'doesn't feel Surrey at all' Redhill, or to be exact, the leafier area of 'feels a bit more Surrey' Earlswood.

The nearby church clock bonged 5pm, the time that my next pub was due to open indoors for the first time in 2021. 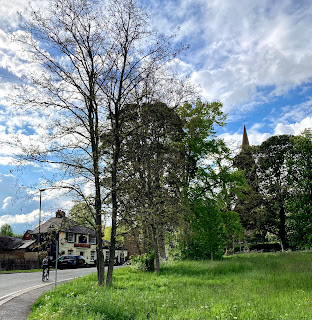 This pub had only very recently confirmed their reopening hours, so my nerves were a-jangling as I got closer.  The front door seemed to reassure me. 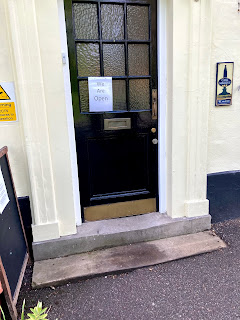 But as I waggled the latch, nothing budged.  I walked around the back, no sign of anything doing.  I walked back around the front, and a man 'released' the door.  Seems there was a bell I had to press, but I'd missed the sign on the blackboard. 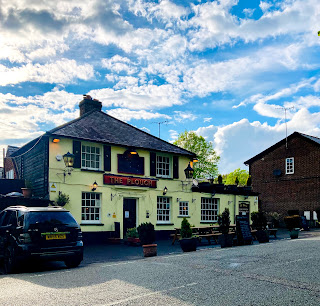 Phew!  Welcome to Plough, Redhill (1748 / 3177).  Mr Plough (not Homer Simpson) was incredibly respectful, despite my door stupidity, calling me 'sir' throughout despite the fact I spent most of my time walking around in a confused haze with a cauliflower.  Mrs Plough was also lovely, in a ball of frisson type of way, but I couldn't help but feeling there was a lot of nervous energy about the pair, determined for first day indoor reopening to be a success, everyone following the rules to the letter.  I was soon seated around a corner in a back room with a cracking pint of Shere Drop, one of my 'go to' Surrey real ales.  The pub itself was superbly unsullied and old fashioned.  Toto's Africa played, and I turned to Colin and told him I wouldn't be blessing any rains after what we'd seen this past 24 hours, and Africa is welcome to them.  The atmosphere picked up as a trio of locals rocked up, a jovial bloke and two garrulous ladies who had an air of the readers wives swingers about them.  There was a nice symmetry as my time in this lovely pub ended as it began.  Asked to exit by the garden, I only found a padlocked gate.  Not wanting to appear foolish a second time, I asked a young couple in the outdoor smoking area what I was doing wrong, but they agreed it seemed locked.  I went back in to find Mr or Mrs Plough, but when I told Mr Swinger, he just says "HO HO, HOW MUCH YOU HAD TO DRINK LAD?" and makes his ladies laugh.  But luckily, Mrs Plough appears and confirms I ain't going mad.  Seems a ghost locked me in!  Terrific pub, but hard to get in or out of. 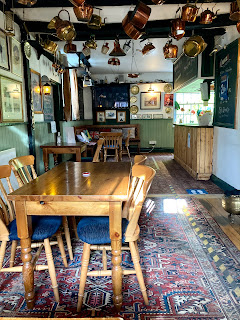 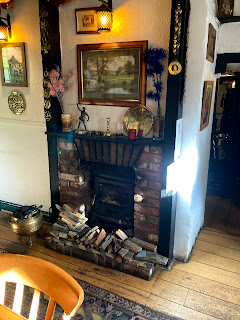 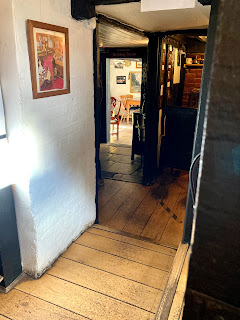 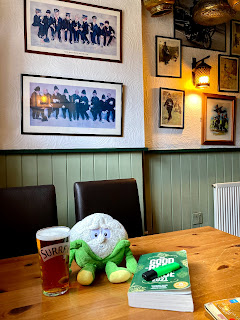 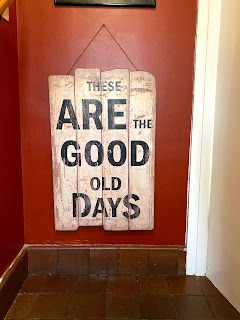 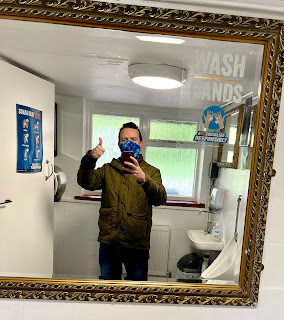 From Redhill, at least I was on a direct line back towards Guildford.  But wasn't time getting away from me.  It took a while to reach Epsom, home of my final pub tonight, meaning I'd only done 5 instead of the required 6, meaning I'd turn into a pumpkin if I wasn't home for midnight.  BRAPA law.

The rains had returned, and the short walk was a painful sludge.

Honestly, back in the summer I'd ticked off THREE Epsom pubs and was all like "wahey, cracked it!" but like so many Surrey towns, they threw in a newbie for 2021.  This one was a Wetherspoons. 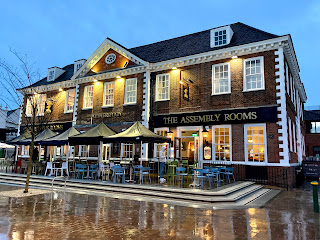 As I stepped towards the entrance at Assembly Rooms, Epsom (1749 / 3178), three burly bouncers swarm around me and I'm like 'ey up' and trying to be all northern and 'ard, but they've all got really gentle voices and speak in a cutesie way like "can ya dooooo the scanny wanny on the trackie tracey thingy on the little window til it goes 'ping' on your phoney woney?"  Everyone else had what were either west country or Norfolk accents, had I entered the twilight zone?  Inside, I ran straight for a table, powered up the 'Spoons App, and noticing the beer range was Doom or Abbot (someone tells me this is because they've upset so many local breweries of late!) , I went Doom because I could feel the invisible hands of Martin Taylor on my shoulders.  A weird warming sensation, maybe I'd just weed myself?  How sweet was this Doom Bar?  Doom Salted Caramel perhaps?  Crafty!  Two blokes on the neighbouring table had skinheads and pretended to be tough, but then scarpered quickly, leaving a huge amount of Stella.  What a waste!  There was something lacking about this 'Spoons, and it needed to be pointed out to me.  One of their classic carpets.  Yes, it certainly made the place feel chillier without it.  An old blokes dog kept glaring at Colin from a far, so much so that when I finally went to the loo, I put Colin back in my bag.  Last orders can be a very interesting time of the day to try a 'Spoons, but I still think early morning and mid Sunday afternoons are my favourite Spoonie times. 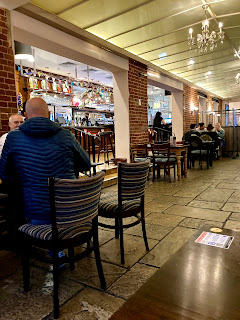 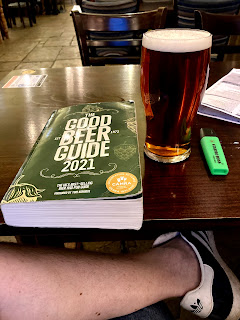 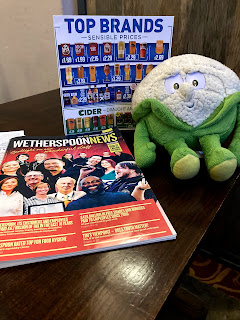 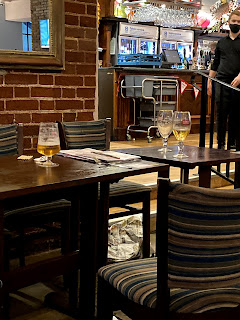 It isn't that I didn't try for the sixth pub, but the train really dragged back to Guildford, so my required pub tick there would have to wait for another day.  It was food and bed for me, that mid afternoon ESB really had wiped me out!

We'll end part three with my first pub of Tuesday, which once again dawned with beautiful sunshine providing a 'false dawn' which again would give way to heavy rain.

A nice low-key breakfast box was enjoyed, as I did a bit of double checking on the old planning front, Surrey greening up nicely. 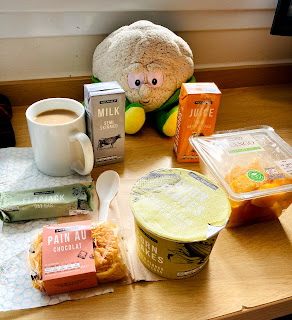 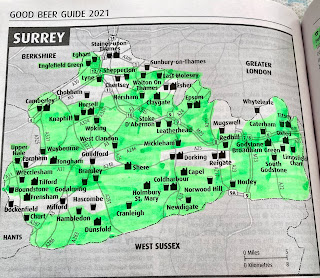 Farnham was this morning's destination, a short train ride to the west, perilously close to Hampshire.

No Farnham pubs had appeared in the 2020 GBG (which surprised many a local I spoke to), but I had been there twice.  Firstly, to catch a bus to Churt.  Secondly, as part of a back breaking walk from Boundstone to Upper Hale.

Just like on both of those occasions, this morning I found the town in gridlock.  "They're cutting the grass on the verge and it is chaos" moaned the young lad opening up my first pub of the day, here it is ...... 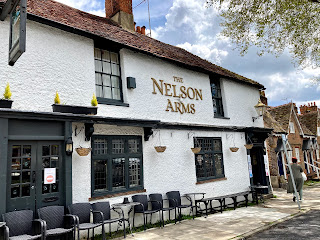 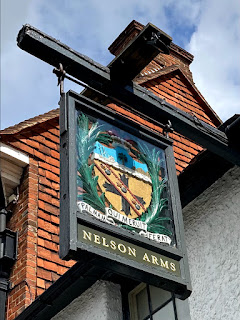 He tells me this because he isn't ready to open indoors until about 12:30pm, so I'll have to sit on the bench outside the front of the Nelson Arms, Farnham (1750 / 3179) for the time being.  I scan the room and wonder exactly how this olde worlde environment is going to be transformed to 'ready' in half an hour, but you have to play the game in these situations.  At least my Timothy Taylor Landlord in a nice branded tankard is of decent quality for Surrey TTL (not sure it quite 'held' as I went down my pint), and I lean against the pub and watched the frustrated gridlocked traffic queuing to get through town.  An old lady stops to chat, and confirms what I suspected, grass verge cutting or not, Farnham is a troubled traffic town.  By 12:20, the rain has unsurprisingly started up and is now dripping steadily onto Colin's florets and more importantly, the Surrey section of the GBG.  I decide to go in, nothing has changed inside the pub, the bloke is nowhere to be seen, and at the same time, an old local who'd been forced out the back has had the same idea as me.  When the barman returns and clocks me, he says "sorry about that dude", offers me a second pint which I of course decline, and I'm still no wiser as to what the 'setting up' entailed.   Front and back doors are both open unfortunately making it airier and nosier than this pub interior deserved, very Greyfriar Reading (let it go Si, its been 5 years!)

(I'd normally show you the lovely pic of my pint, one of the queuing traffic, and two indoor shots but Blogger is being rubbish and saying "Sorry! An unexpected error occurred while processing your selection.  Please try again later" no matter what I try so you'll just have to imagine them, and we'll just have to hope this is temporary or we'll be off to find a new home!

Anyway, with the rain teeming like an arse (as I wrote at the time), it was hat on, coat zipped right up, thanks and bye to our barman, and cross the road into the still stationary traffic in search of our second Farnham GBG tick.

With news on that, and BRAPA returns to Surbiton and Esher, join me in part 4.  It won't be til next week though as I'm off galivanting around pubs in another weird southern county over the Bank Holiday weekend.

Til then, good bye, and thanks very much for reading.  Si