Hello and welcome back to Part Two of my reminiscing on that most joyful part of 'pub ticking', where you complete a county (until the following September of course when the new edition hits my doormat with the force of a thousand wildebeest).

Having completed Bedfordshire in Jan 2016, attentions swiftly turned to the next alphabetical county in the Good Beer Guide, Berkshire, whilst 'back home', South Yorkshire was my new 'after work extra curricular' focus, having finished West Yorkshire, also in January.  North Yorkshire, my home county, was making good progress too thanks largely to the chauffeuring of BRAPA Dad.

We actually have to fast forward all the way to New Year's Eve 2016 for my next county clincher., which was South Yorkshire.

Former Si wants to tell you about 31/12/16 is here to tell you more.  The day had begun at 10am in Worksop's staggering Unicorn, a rare north Notts visit, so incredibly lively, it sadly meant I was in for a bit of an anti-climax for our key pub of the day ......


"The bus was inevitably delayed by 10 mins but a bunch of us, including an ultra annoying woman who nobody seemed to like, hopped on.  The best fact I learnt was that Barry Harris is always moaning.  Not sure who he is but I'd like to meet him.  I jumped off the 19A at Woodsetts where the pub was just over a crossroads .....

Celebratory moment it certainly was, I'd promised myself back in February on my first trip to Armthorpe that I'd finish South Yorkshire by the end of 2016.  I left it late, but I did it.  Having said that, this pub fell kind of flat.  Even from the outside, the whole 70's Estate pub stuck onto old building looked a bit rubbish.  Raw Brewery Tap I hear, loved their beers when they had lots on in Barnsley's Old Number 7 on a football day, so why then, would they only have 1 on out of 5 pumps?  It could just have easily been Black Sheep, Dukeries, Tring or Imperial brewery tap.  As I was getting served, a cute elfin Asian barmaid shouted "you've got that coat on again!" I was about to comment it was my favourite, when I realised she was talking to an old man.  It would prove a bit ironic in that the pub was FREEZING COLD and I (and everyone else) kept coats and scarves on for the duration.  Something to do with "Raw"?  My Dad always judges how good a pub is by how long it takes him to remove his coat, he'd not have been a fan.  I then caused a minor stir by refusing to accept a 'loyalty card'. "One off visit" I explained, before hastily adding "unfortunately".  A blatant lie but at least I got a warm smile off elfin barmaid who by now was wrestling a cash register.  The music was shit, pub was dull, experience was quite drab all round as I used my STABILO highlighter to finish highlighting South Yorkshire.  One overheard conversation to end on:
LOCAL : "What is going on in here tonight then?"
BARMAID : "It is New Year's Eve."
And it really was that kind of pub.


I got chatting to a lady at the bus stop who had once complained about the temperature in the Butchers Arms when she had a meal there, so I wasn't alone."

Wow, back to the present day and you'd not find #WokeSi2020 saying things like 'cute elfin Asian barmaid', and also, why was I was moaning about what beers were on what handpumps, like it matters?!  If a pub is open and brown stuff is coming out of a handpump, count yerself bloody lucky, shut up and drink it, that would be my 2020 view.   As long as it ain't vinegar or lines fluid.  But that could be the lockdown talking.

Fast forward two months and I was down in Berkshire for the final time for now.  My Berkshire experience had, like South Yorks, started in 2016 and really given BRAPA fresh momentum after the relative drabness of Beds, and Sir Quinno (Reading) and Tim Thomas (Newbury) had been perfect hosts on my epic spring holiday, where I did six pubs a day for a week and my liver was crying.

And it was fitting that Tim was my chauffeur on that sunny winter's morning, 4th Feb 2017 - both of my remaining pubs being in his 'speciality' west of the county, where trains and buses are scarcer, and it all gets a bit more rural.

Again, the second pub of the day was the county clincher, called the Rising Sun in Stockcross which I think closed down not long after, as so many pubs seem to do after my visit.  Hope it has, or can, reopen.

"The pale yellow fiat panda then bobbed about a bit on the road back to Newbury, where Stockcross is located.  Bit nervous, was it open?  Yes, it was.  High drama for all of 0.002 seconds.  Here was a moment I'd been working towards since 20th Feb 2016.....

The door was a bit stuck just to add to the tension, but I was in and we were soon chatting with the friendly landlady about Berkshire pub stuff, and of course, the fact this was the last of my Berkshire pub visits.  A man to my left with a bald headed that kept shining off the sun was loving this fact, but his wife had an unimpressed toad-like face which screamed "BRAPA Crapper".  Poor man, if you are reading this and want to leave her to become my Buckinghamshire chauffeur, I'll pay you in coffee and shiny bald head wax.  Sometimes in pubs it's the little things that impress, and what strangely stuck with me here was the TV!  It was kind of half propped on a low down side table, like if you were watching it whilst decorating a house, none of this raised Sky Sports nonsense.  A lot of customers were present so none of the cosier rooms around the bar really had a seat free, so we went into the duller (well, sunny) more spartan backroom where two annoying American men arrived to loudly order food and try and look impressive for finding a semi-rural pub.  Well guess what lads, you ain't BRAPA so no-one cares!  Fair to say, I felt quite self-satisfied here.  Tim did a bit more pubby maintenance (I don't mean he fixed a shelf) and we were on our way back to Newbs, job's a good 'un.

Having said bye to Tim, I sat in the waiting room and ate my Dairylea Lunchables and read Ullage (a classy combo) til the train back to Reading was due......"

Well, the bald man never did become my Bucks chauffeur.  Was a great experience, Tim is so lovely, and whilst I think I preferred the earlier pub in Wickham, this one was still quite good.

And speaking of American interlopers, if you do the (INCORRECT) American date convention to 4/2/17, it becomes 2/4/17, and yes, it was on this date (2nd April if I've confused you all now) that my next county was clinched.

North Yorkshire.  What can you say about North Yorkshire as a pub ticking county?  Vast, near impossible, and probably a little bit unrewarding, lots of bland rural dining pubs lacking a warm welcome.  And I live there.  Well, in the City of York anyway.  And yet, I needed Father BRAPA's chauffeuring generosity to get it done, and even then it took us me three years, July 2014 when I started it off!   I hope there isn't a southern North Yorkshire equivalent or I'm screwed!

The due finish date had been the previous Saturday, but that old chestnut of opening hours which differ from those published in the GBG had stymied us.  Father BRAPA, being the awesome Dad he is, saw the pain and anguish etched in my every facial feature, and said we'd come back the following Sunday.  All the way up near Darlo.  Never-ending roadworks on the A1.  Legend.  Mummy BRAPA came along too for a rare outing, her first BRAPA visit since Llansillin, and THAT pint of York Guzzler .......... and it was her who spoke first as we got out of the car ........

"You're nervous aren't you?" she correctly observed, having known me for almost 38 years.  This was Anchor Anchor levels of "you'd better be bloody open" pub anxiety.  Mum strode confidently up the steps, crashed through the doors like Oliver Reed on a stag do, and we were in after the obligatory photo opportunity. 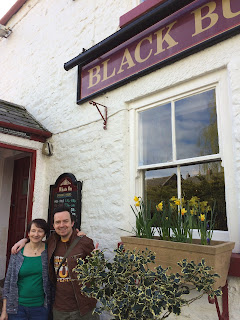 Phew, my round I think under the circs!  Though I sadly remembered I couldn't show off my new £1 coin I'd squandered yesterday which would surely have been massive news in a Darlington postcoded outpost like Melsonby.  It's a bit of a cliche to say "it's like walking into someone's front room" in the world of pubs, but this actually was, and so front room-esque, it lacked a bit of pubbiness (bench seating, a log fire, and some pointless beams would've been nice though bold leather seats, daffodils and a turntable had to do.  It was a real "grower" this place though, the foundations laid by superb jolly friendly staff and a good job as a local man came in muttering something about his mate being beaten up at football in Blackpool, or something.  But there was no time for sympathy in his direction, as his wife was delayed on account of holding a watery funeral for her dead goldfish.  Sympathetic eyes abound when she arrived, though the landlord kind of killed the mood by asking if she'd flushed it down the toilet.  My subsequent "Finding Nemo" joke was met with blank stares.  Oh dear.  I'd checked the ales three times to ensure the Ward's Best Bitter was real and not a mirage from circa 1998, Mum was on her customary pub lemonade, and Dad decided to be a little angel and have J20 which surprised all.  "Absolutely any flavour will do Sime!" he told me, before adding from the corner of his mouth "anything with orange in it",  Errrm, so the orange flavoured J20 then Dad!  So awkward some people.  As we sat and admired the old Vaux mugs and Mum wondered if I'd find anything to write about(!), landlord brought us some complimentary snacks - cheese on sticks, pieces of sausage, Yorkshire pudding and pickled onions in a little white boat thing.  You know when a pub wins you over, and you worry you've been easily 'bought'?  This was me in here!  I had a 50/50 decision to make as to where the bogs were, so obviously I went the wrong way and had to be retrieved from a smokers area, but this was a fine pub experience to finish NY in. 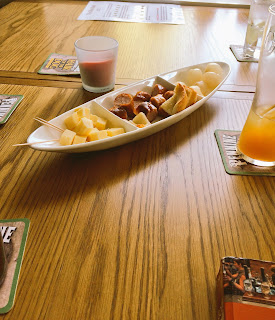 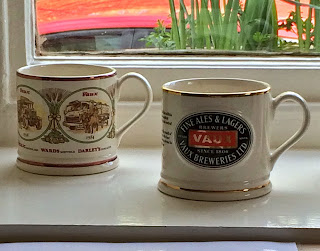 So there was have it.  Thrilling stuff.  And hold onto your hats because in part three next week, we have Buckinghamshire, Rutland and Cheshire.  I may also mention Isle of Man, which I completed bar a 'technicality' at the 11th hour.

Looks like pubs won't open til at least July, so expect to see more boring blogs like this over the coming weeks.  And keep dreaming of how nice that first sip of pub ale will taste when we are back.