Such was my determination to finish the pub ticking of Cheshire (26/5/18), I had an unplanned overnight stop in Oldham the day before, and then got lost crossing fields to try and find the canal path which led to the pub!  Finally, having enlisted the help of two walkers in a similar predicament, Ian & Dr Laura, not a real doctor she admitted, I got back on track.  Former Si takes up the story .....

"We crossed a field diagonally and my phone reset itself, hallelujah praise the lord, we'd reached Grindley Brook.  "Off you go then!" said the good doctor, worried I'd come for lunch with them and they couldn't get rid of me.  'Don't worry babe, I'm as independent as a free bird' was what I wanted to reply, but I didn't wanna punch and they seemed a nice couple so we said our goodbyes and I carried on north.

I couldn't relax totally though, still a good yomp up the canal and I knew the pub closed mid afternoon even on a Saturday on though it was only 1pm, you can never really trust such pubs.


Finally, I saw I lot of men with hankies on their heads looking studious and pretending they knew what canal locks actually did.  Some were more camera shy than others as I went in ...... 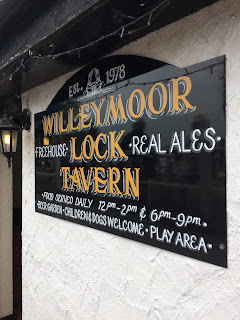 If you can ignore all the 1 star trip advisor reviews and a 20 year old tale of woe from two Stockport pub heroes, I'm here to tell you that this was a fine end to ticking in Cheshire.  (I say 'end', of course I mean 'end for now').  Canal pub + Cheshire + 1:05pm on a Summer Saturday didn't exactly fill me with glorious hope, but our landlady masterfully handled the stream of tourists wielding leather bound menus ready to order their smashed avocado and squid baguettes.  I got served alongside a gorgeous southerner, disappointingly called 'Sarah', but her tribal tattoo which may have said 'BRAPA til I die' and hidden boyfriend was a shame.  When it came to my round and I simply asked for a pint, landlady was like "anything else?", the customers looked shocked too, as if there must be a catch and I'd forgotten how to say 'quinoa asparagus cous cous pasta bake'.  I hadn't.  The pub felt nicely old and tumbledown for something 'est. 1978' and I went to a backroom where I perched at a table that was 'reserved for 4 Danes' at 1:30pm.  "20 minutes to neck it!" joked a gammon-faced old southern bloke, with greyhound and wife in the background adjusting themselves.  But I was planning on lingering beyond 1:30pm, waiting to see how I got kicked out of my seat, and whether these were Viking longboat bearded Danes, or actress Claire Danes and family.  'It'll all be fun for the blog write up' I thought.  The food looked good, my ale was good, service seemed friendly and efficient, but the atmosphere remained somehow sleepy and relaxed.  As I gleefully highlighted my final Cheshire pub, Mrs Greyhound suddenly exclaimed "what does fortitude mean?"  Hubbie didn't know, and the other two couples within earshot couldn't help either.  'Jeez!  Fortitude, fortitude, you are looking at the pubby personal embodiment of fortitude' I wanted to say, but didn't,  it may've sounded big-headed, slightly.   It was 13:35, still no Danes, time to move on.  "You got 5 mins extra there!" said Mr Greyhound.  I told him shame I didn't get to see what they looked like, but he just looked confused, like a man who knows no fortitude.


Four months later, I was in Central London armed with a shiny new Good Beer Guide (red cover, miaow!), away from home for the best part of a month working on this nightmareish work project called 'Project Calypso' where every day was worse than yesterday.

Every evening, I went to two or three new pubs in Central or North London, putting it all on expenses of course (£5 a pint?  It'd be rude not to), and I was joined by Project Leader and all round superwoman Cathie West, who said she needed a large glass of wine ......

"After a bit of Tubing, we ended up walking up a stone staircase onto Essex Street, where the fun had begun all that time ago (well, a week the previous Saturday) at the Temple Brew House.

This pub was perched on a corner, looking nice and old, very much the stereotypical 'nice' London pub: 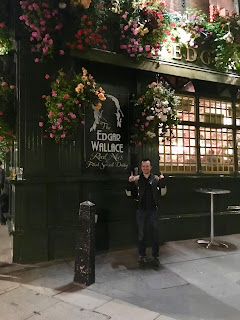 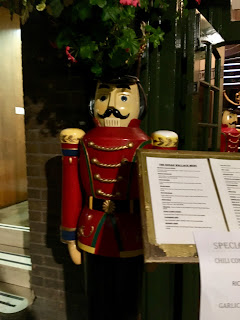 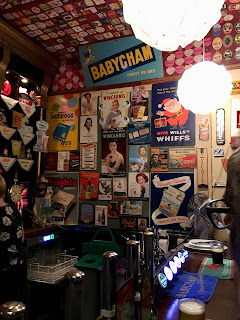 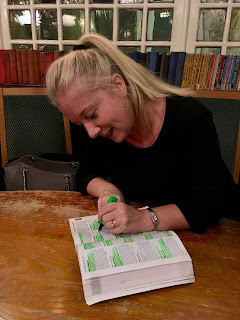 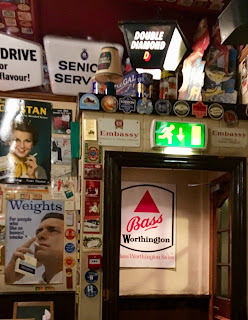 Our final trip this evening takes us to Cambridgeshire.  It was a sunny winter's morn, 2nd Feb 2019 and I'd just completed my final two Cambridge pubs, the Mill and the Castle, and was now ready for my final pub in the county further north in the suburbs of Peterborough.

Martin Taylor, so integral to my Cambs completion, was sadly missing in Sheffield on student duty, but we had a debutant in the owlie shape of Martin the Owl ..... whatever happened to him?   Like Central London and Cheshire before it, it'd be a winning pub to end on ....... 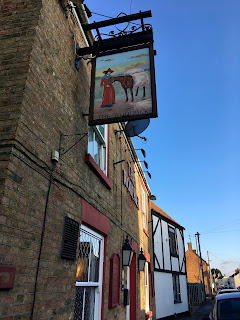 "EYORE!  EYORE!  EYORE!" chanted the locals as I squeezed in at the bar, ordering a good pint of Tim Taylor Landlord from a reassuringly small selection of standard bitters.  Oh yes, Cambridgeshire was going to go out with a bang and not a whimper.  No, so it wasn't me who was the donkey but one of their local old bloke mates called Mick/Michael.  Not sure what he'd done to earn this nickname, but they were lovin' it.  The one sensible bloke at the bar rolled his eyes at me like teenagers do in that "oh god, you are so immature, so embarrassing!" kind of way.  I says to him "wow, this is quite an introduction to the pub" and I sat at the far end as the donkey themed chat continued.  "Next time I go to the seaside, I'm gonna name every donkey Mick!" said one.  "It's horses for courses!" laughed another.  Oh dear.  It soon died down as the football results ticked around on Sky Sports News and they all started randomly slagging off Lincoln City and Notts County which was pleasing to see.  "Danny Graham!" screamed one of the blokes, and I tell you, that guy is haunting my 2018/19 BRAPA season, for he'd scored again!  As always happens in a real ale pub of good honest standing, a smug Bristol Rovers fan walked in.  They were winning too.  "I bet you are pleased .... but it won't last!" commented the donkey ring leader.  Then "Spirit in the Sky" by Dr and the Medics came on and everyone got a bit worked up by it.  Although the 'donkey' stuff had died down, it was revived just before I left when it became apparent Mick was the frailest deafest bloke in the group. "Don't worry Mick, the new nickname won't stick!" reassured one bloke, in a rare moment of Stanground poetry.  Poor Mick was now being teased for having some rather trendy Nike trainers, but undeterred, he schooled the others in Greek mythology as a result.  After the nice landlord and local helped me find the loo, I put my coat on, glanced up, and Hull City were winning!  What a pleasing end to my Cambridgeshire adventure, great little boozer this. 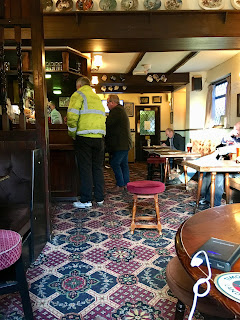 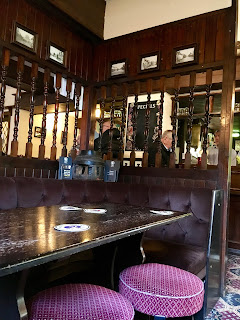 So there you go, three good pubs to get yourself to on 4th July.

Take care, there might not be a part 5 cos Derbyshire and North London were quite recent, but I've got something called SWANVESTA coming up so look out for that, not to mention the all important 'month end review' so we can talk all about the lack of progress made!