BRAPA - I'm Only Here(fordshire) for the Beer

Mum and Dad made their annual mistake of inviting their son on holiday with them, which must have become clear a week before when he (that is I, Si) presented them with the following "demand" map:

I didn't expect to get all 13 complete, but two or three a day was my not unreasonable aim, though with Mother BRAPA's ankle now recovered, she was keeping a watchful eye on proceedings, so it was always a tricky subject and I had to get out of "BRAPA holiday" mentality and into "walking holiday healthy health walking free hit" mentality.  It was only fair.

Day 1 was notable for the journey, as the remnants of Hurricane Ophelia swept into the west of England, and the sky above Hopwood Park Services was orange as a result of Saharan dust, so they reckoned at the Met Office but who can trust a weatherman?

Being a BRAPA legend, Dad had a pub plan in place before we even got to our accommodation, thinly disguised as a walk between two churches, in places called Edvin Loach and Edwyn Ralph (no I'm not making this up).

The wind was getting up, so we headed south to Bishops Frome, one of my "three key pubs" so chosen because there is no bus sign or train sign in the Good Beer Guide (others were at Chance's Pitch and Linton).  The car park was across the road from the pub just to give us that extra sense of effort made to get there.

On arrival, the first thing you saw was a huge roaring fire to the right just across from the bar,  16th century apparently with a 'witches cross' (to stop them coming down the chimney), though a more skeptical person might suggest it was etched on in 2005 by an enthusiastic Spurs fan.  We were greeted by friendly young barman and a local barfly, both of whom were amazed when I said "right Mum and Dad, it's my round!"  They must have heard about my reputation.  (Not really, I'm tres generous usually if I remember!).  The 'local' bloke had a London accent and revealed he was from Tottenham, he was a gardener his t-shirt said, and like all good #pubmen, was interested in BRAPA and made some good comments including criticising local CAMRA for recently taking this pub out of the GBG to "give another pub a chance".  "It will make people think this pub has done something wrong, deteriorated in some way" he said, and I agreed.  Once in the GBG, you should stay in unless you go downhill, get taken over, etc.  Sounds to me like Herefordshire needs some of London's overly generous pub allocation.  The pub was as traditional and cosy as I'd hoped from a rural Herefordshire pub in my mind's eye, stone flagged floors, rooms through to the left and right, with the bar the cosy centrepiece though sitting by the door near the fire in these winds meant cold legs, hot middle, cold neck!   I remember thinking if we get to a better pub all week, we'd be doing very well.

Day 2 was Tuesday, dawning surprisingly sunny (little did we know it'd be the last time we'd see sun this week, and probably this year).  Our cottage was so remote, my bedroom backed onto this huge wood and all night, owls went hoot hoot screech screech.  I could go off my favourite creature.

We were at the foot of the Malvern Hills, right on the border with Worcestershire so Dad & Mum had this bee in their bonnet about being able to walk onto the hills from our front door.   The plan was to walk on the right hand side of the wood, but we got sucked further and further in - bad news as the wood was also part of the 'Land Rover Experience' where rich men with small willies pay thousands of pounds to drive Land Rovers around dirt tracks with huge man made puddles, which made our walk treacherous.  Hope I phrased that ok!

On the plus side, I started to see what was happening here and before Mum could realise, we'd snaked further and further north west around the wood and by 'chance', a GBG pub appeared at the other side!  Oh, and it was lunchtime.  What a coincidence.

Again, we walked into a very traditional bar area, and were greeted by another wonderful barman, he had bryl creamed hair and looked like he stepped out of the 1930's, even more so when he said the ale hadn't been pulled through yet so he siphoned it into a jug and brought it to the bar where he poured it into pint glasses in front of us.  I wondered if it was all for show, but it was again the Herefordshire I had imagined.  We were eating, unusual for BRAPA, but not in these circs, but were a bit surprised when he said we couldn't eat in the bar area and had to go down into the carpetted comfy, but modernised left hand side.  At first, I was annoyed by this, but as Mum rightly pointed out, if this was normal BRAPA and I'd just been drinking, I'd have been delighted that they were keeping the bar as a 'drinkers only area'.  I mustn't be a hypocrite.  Even though we ordered sandwiches, portions were huge and they were like door stops, no doubting the quality but how much coleslaw and rocket leaves does one man need on his plate?  Don't answer that.  This is a pub adventure.  I'm not Keith Floyd.  Ok, that was a bad example.  Anyway, we then fell out over drinking strategy which meant 10 minutes of awkward silence, but good BRAPA-wise as we could observe the coffin dodgers around us.  Two posh women, one telling her life story to a bored one .... "you're a great listener!" (she wasn't listening).  And a characterful group behind us, doing that rural community thing of dangerously trying to have opinions on current affairs.  "But John, you are not an immigrant!" exclaimed one hyperactive posho, as John tried to put himself in an immigrants shoes, if the immigrant was an 80 year old farmer who thought a shopping trip to Ledbury was "going into the city".


The walk back to our cottage was the most painstaking part of the holiday, but by evening, me and Dad were raring to go for a pubby car trip.  Mum decided to stay behind and recover from the walk.
Our first pub was on the main road, we'd actually driven past it yesterday on the way here, just the otherside of the Ledbury metropolis. 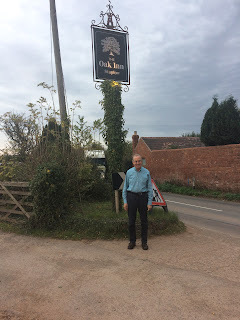 We wandered in through a porch which smelt distinctively of apples.  You couldn't see any, perhaps they were brewing their own cider out the back like that pub in Warwick, we were in the right part of the world for it.  Now, as the old BRAPA adage goes, there's nothing sadder than a shut pub, and although this wasn't shut, there's a new BRAPA adage which goes "the second saddest thing is a P.I.S.S. barmaid, especially when she's a brunette".  But seriously, she gave us absolutely nothing ... NOTHING.  She looked almost terrified.  Dad even tried to make a joke of counting his change in the failing light but absolutely nothing, until we left, I returned the glasses, she said thanks,  and I saw her cackling with two Eastern European ghoulish women who were either having casual job interviews of were brewing a potion with rotting apples and eyes of newts.  Such a shame.  And I say all this cos there isn't much to say about the pub, it was comfy, felt old, warm enough, sat on very low slung settees, but it lacked the charm of the others this holiday.  The weakest.  Beer was pretty lame too (Ledbury Gold, Simey Beer Score C minus), perhaps even a tad on the turn.  Two local men roused themselves into loud chatter, the ringleader boasted about his days drinking with Tolkein and CS Lewis in Oxford at the same time, Dick Turpin probably popped in for half a Cloudwater DIPA V.7.1 too.  He then started talking about York Minster "ooh, they may charge to get in these days!" he said.  "Correct" whispered Dad.  Time to leave.


We drove a bit further east again, took a turning, and went down this impossible country lane.  At the other end, we were surprised to see not just a large pub, but a huge community, who'd have thunk it?  And how busses get down here, I'll never know but apparently, there is one cos the GBG says and obviously it never lies.

So quite a large echoey pub, first thing I noticed really and this was partly because of a game of pool going on to the right hand side of the pub, it sounded like walking into a snooker hall.  Now I don't know about the UK as a whole, but in York, I find that pubs with pool tables are usually the rubbish ones with bad or no beer - a shame cos I like a good game of pool, but time and time again in this Malverny part of the country, I saw pool tables in some of the nicest pubs which was reassuring. The welcome we got from the young bar lad was the perfect tonic after Missy PISSY, and his young trainee wide eyed honest faced girl hovered in the background, they actually looked like they were pleased we'd found their pub.  And after a bit of 'helpful' beer chatter, which you tend to get whether you like or not in pubs that maybe have a slight dining 'leaning', we felt better about the world.  We did spill our drinks everywhere though, total lack of head, not that I'd EVER encourage a northerner to take a sparkler down south.  'When in Rome' and all that.  Beer quality was superb btw.  And despite it having a slightly airy dining feel, building itself was old and classy enough that you grew into it as time went on.  On the way back from the loo, one of the pool players did perhaps the worst impression of a Dyson Airblade you could ever imagine (sounded more like one of the owls outside my bedroom window), but this was a nicer pub than first impressions may suggest. 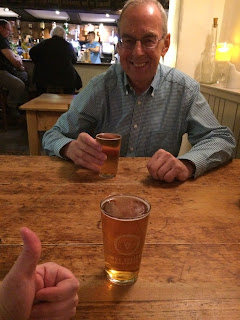 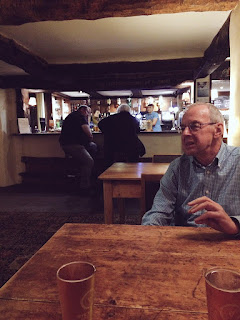 We retired to our cottage for a bit more Monarch of the Glen DVD and Ploughman's supper, we know how to live, but what treats would await us on day's three and four in the world of Hereford & Worcs pubs?

Tune in tomorrow similar time (hopefully earlier) to find out!