BRAPA - A Difficult Day in Aylesbury

I started my four day tour of Central Bucks in Wendover, mainly because my train from London Marylebone stopped there and it seemed a "quick win" (to use an annoying work term) before checking in at my glorious Travelodge.

However, it was an early reminder of just how unreliable pub times are, and Martin Taylor's comment "good luck with midweek pub opening times in Bucks!" really hit home as it was closed.  Luckily for me, and unusually for the GBG these days, the write-up had recommend another pub down the road called the White Swan - Fullers unity!

So much to do this week, and I inadvertently start in a non-GBG pub, you couldn't make it up!  Perhaps that added to my gloomy feel in here as a nice but thoroughly miserable looking bloke served me half an ESB.  I was one of two customers, the other looked like he belonged on a South Coast sailing boat with Wham in 1985, there was something 'rugged Howards Way' about him.  My ulterior motive for coming here though was obvious as I asked the barman if he knew when/if the Pack Horse was opening?  "2pm they've just changed their hours!" he replied.  It was 2:04pm when I asked, it had been 1:55pm when I'd tried to get in!  I downed my premium Fullers ale, good quality and a proper pub, but when sailing bloke left, I soon followed and headed back down the road away from town. 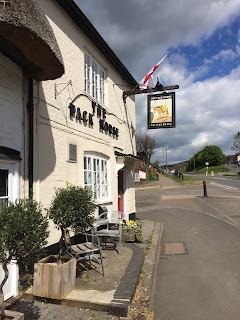 And true enough, the pub was now open and I was the first customer and was greeted by the friendly barmaid, who'd taken it on from her Mum, with her daughter also working in the pub and it had that warm homely feel of a place that was 'loved' - I felt a bit like a Derek Acorah of pubs telling her all this, like I was listening to the history in the walls!  Nevetheless, she was quite gloomy about the future of both this and the White Swan "in the current pub climate" - had considered doing food as her son's a bit of a chef but I discouraged her and tried to get a scotch egg/ sausage roll/ bar snacks compromise going!    She seemed taken by BRAPA, and a visitor from York, she admitted her husband was a Lancastrian and I just started saying how nice Lancs folk were when she told me she much preferred Yorkshire!  No one ever says that!  I thought the older front part of the pub seemed the best place to sit, but she warned me this was the "old man's" area and I'd be called a "muppet" if I sat here long enough.  I took my chances as she went to answer the phone, still being the only customer.  Daughter, celebrating her 40th birthday, arrived but was more concerned with getting her Mum to put the kettle on.  And then spoke with great excitement about a weekend of celebrating in Skegness.  So I wished her many happy returns ("I'm still 39!" she told me), drank up, and left. 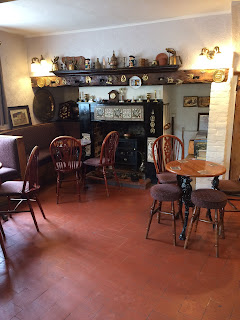 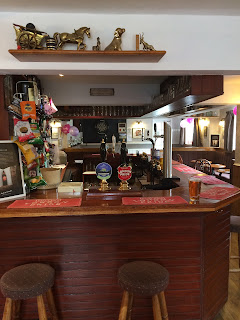 So that was a good solid start to the first day of pub ticking, though I scarcely believed it'd end up being my "pub of the day" (but it certainly was) as I travelled on to Aylesbury to check in, it was schoolkids chucking out time, so the train also had a fair smattering of local oddballs (paedos?)  who all looked like Jim from Friday Night Dinner. 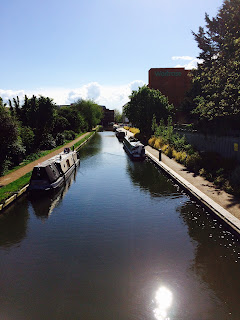 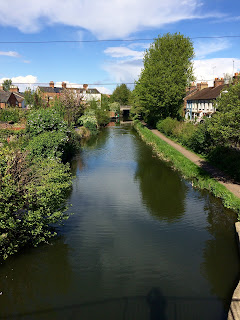 One minute, it was bright sunshine, the next grey and hail showers but I just made it to pub two before the heaven's opened..... 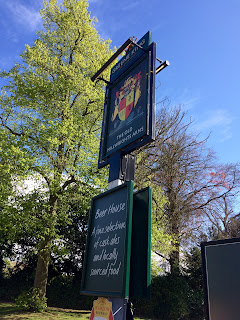 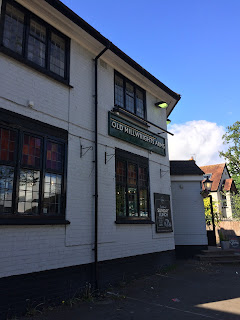 The OMA, as it seems to be known locally (maybe the folk of Aylesbury are similar to those of Chorlton and can't handle too many syllables), seemed to be screaming Greene King in my face from the moment I entered, and I ordered a pretty desultory Vale ale served by a barman who looked like he could do something to irritate you, though at the time I just put it down to his blazer / t-shirt combination.  As I sat on a somehow comfortable huge wooden chair with telephone cushion (whyyyy?), I noticed the pub had committed one of my "pub pet hates" by leaving the door open despite the inclement weather - even on a hot day I'd not be impressed!  The only other customer seemed to be a haggard Noel Edmonds type, that was until two Eastern European ladies of the night appeared, adjusted their skirts, and left even quicker.  Music from the 'Lion King' seemed to playing on the speakers, I left my scarf on, frowned, and couldn't even be arsed to get out my emergency beermat - though to be fair, I later found a load hidden in a pizza menu.  The barman decided to try irritating me, as per my earlier comment.  First he asked why I hadn't chosen a better beer(!), Tim Taylor Landlord was his recommendation - "a revelation to the locals" apparently, I told him I had it all the time in York.  That got us onto BRAPA "ohhh, we get pub tickers 2 or 3 times a week in here!  And they always come in at THIS time of day!"  He knew I was annoyed so tagged "it's a cool thing to do though!" on the end, and then muttered something about being a "scrabbler" (I think though may have misheard), I said it sounded interesting, to try and get more out of him, but he said it was boring!  At least he made an effort at all.  Then Aylesbury's answer to Francis Rossi came in and talked loudly about packing his tools away in such a strange manner, it sounded like a euphemism.

I decided there was still time to try something semi-adventurous so hopped on this strange little old fashioned train to a place called Little Kimble, a ten minute walk along a busy road near some manurey fields ...... 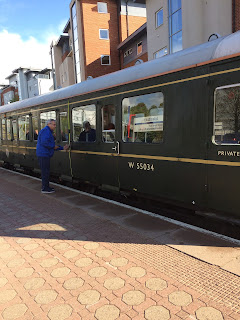 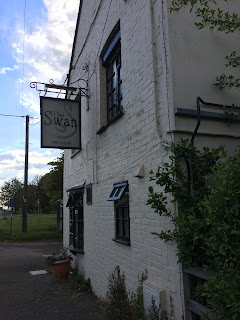 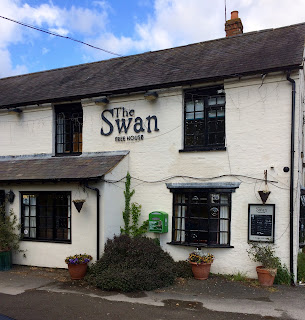 Nice to get a rural one ticked off, but at what cost?  After work drinks being enjoyed by farmers in suits (probably), and plenty of them.  Time for another "pub pet hate", people who don't move from the bar even when you are polite and say excuse me please.  Ignorant.  Even a black labrador decided to be a Twog / Twabrador (Twat Dog / Labrador) as I tried to skirt around it to get to the bogs.  The barman was right on me too, demanding to know what ale I wanted immediately when I'd barely seen them, though he seemed a gentlemanly Rene from 'Allo 'Allo type, minus the French accent.  I had no choice to sit on the cusp of the huge (and totally empty) "restaurant" area to the left.  The fact the suited farmers would rather clutter the bar spoke volumes for how much people just want an authentic drinking experience more often than not in a pub, and it made me think of my earlier chat with the lady in Wendover.  Maybe I'd been too harsh on my arrival.  (Surely not!)  Mrs Twog became the only person to smile at me, but I'd identified my favourite pub people so far - a father n son combo sat at the bar.  Son was a 12 year old manual labourer in hi-vis, Dad had the air of a failed Mancunian drummer from the early nineties.  "Oooh Mum'll be impressed you're sunburnt!" said Dad, and they later sat behind me to enjoy two massive burgers, the only people eating in this totally lopsided pub!

All was not yet lost, I figured as the rain started pissing down just as I hopped on a more boring standard train back to the home of the ducks.  Surely a top pub was around the corner, I thought, as I headed to an out of town Aylesbury pub. 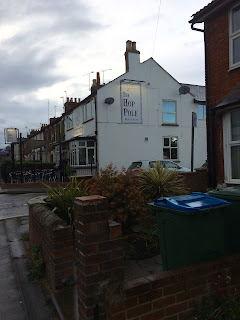 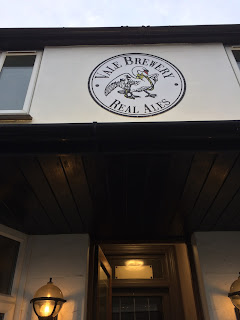 Let's face it, we all know somebody who think a pub is a good pub if it sells a big range of ales.  But the longer I do BRAPA, the less likely I think this is to be true.  Here was obviously Vale Brewery's flagship pub so I had to have one, fancied a porter (think it was the wet weather!) but it was poor, and by the dregs was seriously vinegar.  Shame really cos I wanted to love this place after the last two, the staff were as bohemian as Aylesbury gets, one giggly girl even had a headscarf on and they were a friendly, young, lively bunch and there was much mirth as everyone around me ordered this Moretti lager shite, which kept frothing up cos the pumps were possessed by the devil or something.  At least I'd found a fantastic red leather armchair to observe the pub in.  Shame I wasn't wearing my red leather jacket, I'd have totally camouflaged.  I described this pub as being like High Wycombe's Bootlegger "but with more balls" at the time, I'd probably stick with that!  Two men at the bar seemed to be speaking in code at one point.  "Lucy is in Rotherham" said one pointedly.  "Yes, Lucy IS in Rotherham" said the other.  What did it all mean?  But then it go awkward as the friendly old Asian dude who knew the whole pub stopped at my seat, looked shocked, wandered around for a bit, then asked if he could sit next to me!  I was obviously in HIS seat, and he didn't like it.  All I could do was stare at a garish yellow mirror surround.  But I hate awkward silences so asked him if he was local, enjoying his ale etc.  He was shocked I'd travelled from York to come to Aylesbury, but told me what a friendly place Aylesbury was (about ten times!)  When I came back from the loo, he'd left!  He took a BRAPA card so "hello!" if you are reading this now! 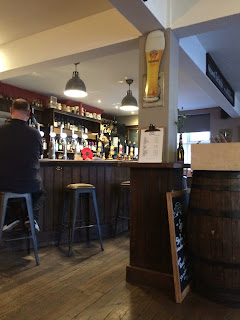 All that remained was to go back to my room (via MaccyD's and Waitrose, you've gotta live!) get an early night, and hope that Wednesday would bring an upturn in pub & beer quality!!