BRAPA - Half of Southport

The NFFD (Non Football Football Day) took us further than ever before, Southport, despite the national weather forecast telling me that it'd only be horrendous if you went to a north western seaside town with at least two GBG Wetherspoons.

Whatever, it was preferable than a trip to Liverpool Crime Street station (thanks Tom!) being surrounded by thousands of baying Scousers in a dilapidated stand with a terrible view, watching Hull City concede their usual shed load of goals here.

We changed at Manchester Piccalilli and Southport for an 11am opener I needed in a place that sounded like a "discount Supermarket chain", Freshfield (quote B G Everitt).  I was determined to cross a road I didn't need to, when the hooded wraith-like character of Tom Irvin appeared, and soon we found the pub.  It didn't look very open at 11:03am but Tom found a side door.

This was a vast building, with a huge restuaranty area to the left and a relatively (but not quite) pubby area to the right.  It's big pulling point is obviously the beer, with 14 ales to choose from, blackboards explaining beer styles, those taster trays, and serious but friendly staff proving they are "ale men" with t-shirts that said #realaledrinker and "can you see my red squirrel?" (okay, so I may have made one of them up).  The ale was good considering the number on, but due to elaborately sized menus, I could not see my fellow drinkers or the levels of beer to see if I was keeping up / drinking too fast!  In fact, the whole pub seemed to be having some internal crisis, caught between a modern restaurant and a traditional pub with nice features such as air vents in the gents which hadn't been cleaned in 100 years, and a blue acoustic guitar next to a fruit machine,  Yet, in the same breath, a menu offering horrific stuff like kale and pomegranate.  It all reminded me of the Crooke Hall Inn, a pub I'd been told was a classic, almost willed to love, yet still felt all too 'vast restaurant in disguise'.  Quantity never trumps quality when it comes to pubs and ale.  Though I suspect it does for many, York's Rook & Gaskill springs to mind.  So, a pleasant place with great beer, nice staff, clean, but not really my cup of ale.   All that remained was to laugh at Sheffield Wednesday, before heading back to the station. 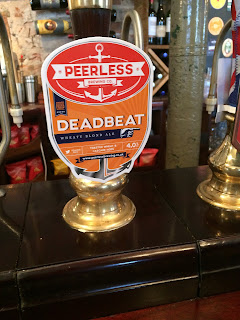 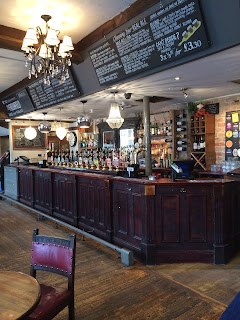 I finally managed to cross the road that I didn't need to, oh and we never did see a red squirrel.  Can I have my money back?   It was time to see what Southport had to offer. 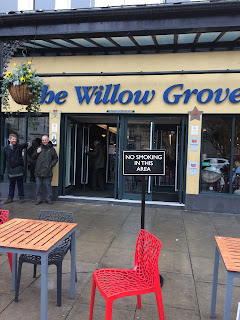 Grey skies, wind and rain couldn't disguise the fact that Southport was a pretty classy Victorian seaside town, much nicer than I'd imagined though I judge all seaside towns on a Blackpool/Bridlington combination, so my expectations are generally low.

Though I didn't do us any favours by starting here.  I used to believe a visit to a Wetherspoons could give you a microcosm of life in a given town.  Or, as Dad suggested, it could just be where all the down & outs go.  Whatever, I'd been determined to prove to him after the Leicester debacle a fortnight ago that 'Spoons in the GBG can be very good.  Sadly, this wasn't the place to prove my point.  It was heaving, and the ales were being turned around at an alarming rate.  One lady (hag) was upset to hear a St Patrick's Day 'Irish Red' ale had gone, she panicked, surveyed the remaining ales, and went for a ..... pint of Stella!  The staff did well to get us served to quickly, and as I handed Dad my penultimate 'Mudgie Voucher' for this period, I found a table - moved some disgusting food plates, swept away the crumbs in an angry manner, and tentatively picked up a soiled tissue packed with the finest Southport D.N.A.  Upstairs had it's own bar, and would have been calmer had it not been for a terrifying hen party and twild learning to walk up and downstairs, whilst Tom was nearly mowed down by a buggy.  However, it was a friendly place and the beer was good quality, so it wins 'Spoons of the month so far.  We poured scorn on the new breakfast menu (Tom wrote his own "specials" on the back), the "NEW!  Beans on Toast" made us laugh out loud, and a jolly man who was far too enthusiastic about Wetherspoons food excitedly told us what the 'specials' were and that he was working his way through the menu!  It takes all sorts.


The day then really could start improving, and after walking past Southport's answer to the ghost of Chuck Berry, busking, under some lovely old awnings, we hesitated outside the Scarisbrick Hotel complex looking confused until a kind man told us Barons Bar was first door on the left.

It all felt a bit clubby, almost like I needed to show my CAMRA card, with plush red carpet and happy old duffers sat on leather chairs chewing the fat, drinking coffee and wine.  Oh, and don't forget the legendary Tetley's which that nice Lizards man had already warned me/told me about.  And now to meet our 'character' of the day, a strange southerner in a knitted jumper - one of those nervous types who couldn't keep still and flitted from table to table interrupting everyone.  He told us he preferred the keg Tetley's (£1.85 a pint or something) to the £2.20 Cask as it was less gassy!  And then like an eager schoolboy, he told me you could take your drink to a different part of the hotel complex to check on the Arsenal score on a big screen!  Although my inner response to him would be "WHY, JUST WHY?" it is BRAPA policy to humour crazy locals so I let him give me a guided tour of the place, he knew everyone, and took me to a low-key Las Vegas type room but it was half time anyway.  It was a bit like an 11 year old Essex schoolboy in 1990 finding the keys to the staff room whilst England play Cameroon in the World Cup.  This tour made me realise the main area of Barons Bar was quite a baronial themed room with mood lighting, a proper bar and the loos - more like the third door on the left, but we (especially Dad) enjoyed the light clubby-esque room we were in.  As our friend appeared to puke on a plant (too much keg Tetleys), and the weird smell of egg turned to burnt plastic, and my 'Top Totty' started to turn a bit sulphury, it was time to go whilst I was still semi-enjoying it.

We carried on in the same direction down Lord Street with the rain teeming down again, and though I didn't have the heart to take Dad in another Wetherspoons, there was another pub across the road ....

With gaudy purple frontage and a Carling inn sign bigger than most micropubs, I felt like we'd finally hit the cheap n cheerful seaside jackpot here.  In some ways, it was the first traditional pub we'd been in all day, a massive place full of lager drinkers, twilds playing on the floor (though strangely, I found it more of a charming scene than an irritating one!), really well kept ale, watchful but friendly staff and huge screens showing pretty much every sporting event taking place at this time across the globe!  Or so it felt.  Dad and Tom described it as "a Wetherspoons that hadn't been ruined by being Wetherspooned".  They spied a Mother's Day menu,  "Mum Eats for Free!" it screamed, and Tom wondered whether you could just book a table for your Mum and leave her here alone, in the staff's capable hands?!  It was an intriguing loophole which I hope a Southport resident will trial.   This was the kind of pub where anything goes, so relaxed, like you could put your pyjamas on and sleep undisturbed for weeks, the kind of place you can eat your own sandwiches which we did.  The acoustics were crazy too, the further down into the Gents you got, the louder the sound from the Hawthorns was despite the TV being very much upstairs.  Hearing 'Wenger Out' cries at such decibels whilst draining your bladder is somewhat off-putting.   But why I did enjoy this pub a lot more than, say, the Freshfield, can only be down to it's total lack of pretension.

There was time for another one, back towards the station on the opposite side of the road, though what surprised us was that Cambridge Walk seems to be a shopping arcade.  Never been too sure whether to trust pubs in Shopping Centres, apart from Southend's wonderful Cork and Cheese, especially ones calling themselves micropubs. 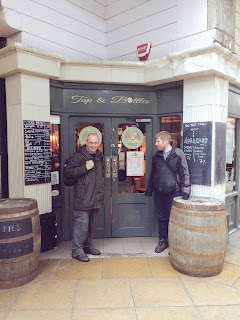 But I'm glad to report that I was wrong, as what followed was easily our favourite pub of the day.  I'd not call it a micropub though, felt more like a cosy Euro style cafe bar, plus it failed my two main micropub requirements.  These are - it had blackcurrant cordial for Tom, and it had TWO toilets.  So there you go.  The staff were young and eager, though perhaps not quite all there as when Dad tried to get a half of "Anarachy Sublime Chaos", he ended up with a "Slimline Chaos" which presumably had been diluted with tonic water.  My pint of Kashmir was stunning, but when you have beers of percentages like these, offering seating that creaks, is flimsy and could snap at any moment probably isn't the kindest thing the pub has done.   Oh and then I spotted an upstairs area too just to clinch the 'probably not a micropub really' theory.  The clientele should be grateful I was increasingly "not at my most observant" so could not pick up any conversational bits, not that I can remember anyway! So that was that, and we'd made great time so managed to avoid too much football traffic on the train back to York.  I'll look forward to part 2 of Southport (really good day out), in the coming months/years but for now, I'm planning another NFFD trip for April, and I'm all booked for three BRAPA holidays later this year.

In the short term, next week should see me complete the last five pub ticks in Yorkshire which is very exciting!  To me anyway.  I'll be in touch, don't wait up.