When National Treasure Terrorist Encourager John Betjeman implored those friendly bombs to fall on Slough, little did he know that CAMRA would take him literally and decimate the town from the 2017 GBG, leaving just a commuter-tastic railway station that seemed to suit the drab, grey rain-soaked morning.

Probably a lesson to me in not buying local rail tickets too far in advance, though at least Slough seemed a sensible changing point for Windsor & Eton where I did need to be for pubs.  I was so drenched, I felt like I'd jumped in the Thames by the time I found my first pub ..... 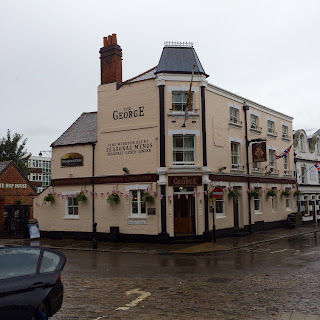 10:29am, and I had to fight my way through a big group of poshos, who were blocking the entrance with those wheely suitcases whilst they 'waited for Giles to bring the car round', sheltering from the rain like they thought they were at some cosy indoor taxi rank.  Under the circs, I felt obliged to ask mine-host if they were actually serving ale.  "As soon as I've finished clearing up the breakfast" was his reply, but within seconds, I had a nice pint of one of the many Windsor & Eton ales on offer.  He was a great chap actually, friendly and hard-working and just as in Hoylandswaine (which felt about 10,000 light years away from Eton) we bonded over new £5 notes.  A bit of late drama for the posh gang, who having expressed gratitude for a wonderful evening and finally left, returned in a fraught and soggy state because 'Giles' (still chatting to the landlord) had accidentally locked the car.  It had set off the alarms and everything.   Amusing.  An old couple ordered a pint and a half of ale so I wasn't the only pre 11am drinker outside of Wetherspoons in the UK, but he spoilt it by loudly declaring "£5.40 for a pint and a half?  Very reasonable!"  His wife then told a half-hearted anecdote about her trip to Waitrose which made it sound like Farm Foods.  The pub twild 'Darcy' then appeared, and like a pub dog, I find a pub owned specimen more acceptable than a visiting one.  It kept demanding Daddy which was no surprise, as Mrs George looked totally vacant when, on the way out, I thanked her when returning my empty glass.  Perhaps it has never happened before.  Nonetheless, an enjoyable start to proceedings.

I should probably note at this point that I'd packed a new addition to the BRAPA survival kit, the emergency beer mat.  This is in case pubs (and Berkshire is a repeat offender county) don't have them.  Here, like at York's Cross Keys on Thursday, the beer mats are at the bar and you have to grab one and bring it to your own table!  Stress.

Onwards and hopefully upwards, I didn't quite have time to squeeze in a visit to Windsor's unassuming looking Acre with less than 20 mins to spare, so took a train to Maidenhead (changing again at Slough) before running for a bus.

The sun was out by now, and I kept my 100% Maidenhead record alive of chatting to an old woman AND having a joke with a bus driver.  WHAT a jolly town it almost is!

A few minutes later, I jumped off the bus and walked into the picturesque village of Littlewick Green, a lovely place with the pub facing the green.  It has been used five times in Midsomer Murders, but never as a pub.  That seemed ominous. 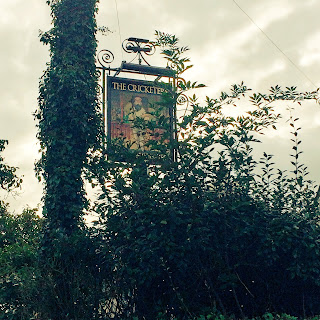 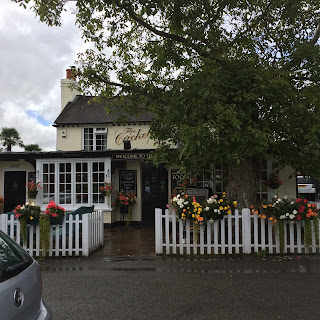 Luckily, my fears were allayed and it was a pretty basic traditional small pub, especially in the left where I sat and no one was eating.  Perhaps a bit too light and airy for Tom Barnaby to observe murderous local gossip over a pint of Causton Best, but I did my best to take on that role in what was my first Badger pub.  The landlord again was a very helpful chap, I pretended I was clueless so he could take me through the (two) beers.  Hmmm, not sure Fursty Ferret is light and hoppy like he claimed but his message was consistent to all incomers.  And most of incomers these were a huge group of old local walkers, whose numbers just kept growing like some all encompassing human caterpillar.  I'd gone from being in an empty room to having to breathe in and move my bag, all in the space of the first two minutes.   The landlord meanwhile, had lost interest in me as a visitor when I said too much, admitting I'd had Badger beers in bottles before.  In one episode of Midsomer, Tom & Joyce looked at this place as a prospective house to buy.  Well, they'd have to keep the Fosters font in as a centrepiece as it dominated the pub.  The old walkers meanwhile, got more amusing once a nervous but happy chap in a Marillion t-shirt appeared.  Conversations included "has the football season started yet?"  When they couldn't work this out, they discussed the perils of cat-sitting, before one woman talked about the perils of accidentally downloading adult movies, which apparently she was quite adept at.   Great little pub.


Back into Maidenhead.  A change of trains, then I jumped off at Burnham which I'd complained about earlier in the year for actually being nearer Cippenham.  This was now a good thing as a 2017 GBG listed pub had appeared.

Cippenham still felt the same as before, with dead-eyed zombies (is there any other type?) in vests and tracksuit bottoms wandering the streets with no end purpose.  Give them a chance though, and they will smile.  Even if their teeth are mainly stumps.  This was classic Berkshire - Theale, Tilehurst, Maidenhead and Wokingham all combined in one beautiful b-movie party.  I'm such a York snob.

"What happens in Scotland stays in Scotland!" was the first thing I heard as I entered.  Yes, like all crazy local gangs in south eastern pubs, the ringleader was a Scotsman, in strange white overalls.  "Guys, Liverpool av a penalty!" shouted the excitable barman with an element of Scrappy Doo about him.  No one cared, they just all slagged off Liverpool and adjusted their baseball caps/skulls.  I took my Rebellion 'Red' to a table which was just about far enough away from the crazy gang (not Wimbledon 1980's) but still close enough to hear what was going on.  The barman kept another current theme going, when he told everyone how "Nicky" had come into his room, naked and drunk at 6am, holding a can of Fosters.  I then went in search of the loo, I ended up outside and then back in, but what must have been the staff quarters, for I found one unisex lockable toilet akin to the type you see in a micropub.  Not that anyone stopped me.  I soon realised I'd been sat right next to the actual gents.  The Scotsman was back in the room having presumably joined the Arsenal fan for a smoke, "I once shat myself!" he announced suddenly.  No one was surprised.  "Well, we've all done that mate", said another.  What??? Was he joking?  It did beg the question, when he'd earlier said "What happens in Scotland stays in Scotland", how bad was this actual incident?  I wish I'd been brave enough to ask.  Actually, no I'm not.

After a bracing walk back to Burnham station and another change at the former town of Slough, I was back in Windsor, and this next pub was a little bit off centre. 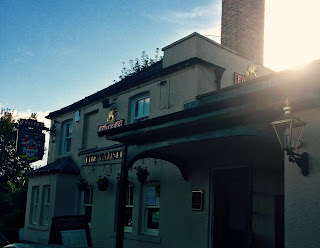 For a bit of a backstreet pub, the Vanni was bustling and doing a roaring trade this afternoon, with lots of the locals spilling into a courtyard / garden area behind.  Not that this stopped the really friendly barmaid from asking how my day had been.  Any excuse to impress a lady with my BRAPA, I launched into chat-mode and turned out her Grandad lived in Littlewick Green.  I really hope he doesn't like Marillion.  Wanting to remain something of an enigma(!) and not outstay my welcome or block the bar for potential customers (because unlike 99% of pubgoers, I have spacial awareness), I retired to the outdoor area.  Pub people are often suspicious of grassy areas on a day when it has been raining I find, so whilst they all jammed into the patio area, I became about the only customer to take my drink to the garden proper.  I might be the first person to ever say this, but the Vanni was so much like Mackay's in Troon, it was untrue.  And that is a compliment.  I guess not many people have been to both!  Ok, so I wish I'd ordered London Pride as my guest Liberation ale was boring A.F. but you can't win 'em all.  Barmaid returned to clear some glasses and smiled from a distance, contender for an end of season BRAPA award?  Proper good pub this though.

What I had done that was rather stupid of me from a BRAPA perspective was book myself back on the 18:30 from King's Cross.  What was I thinking?  Cost saving?  Despite my good early start and being on schedule, I worked out that if I was to give myself about an hour to cross London (as advised previously after some missed trains!) I'd need to be on next train out of Windsor.  Silly me.

I didn't even have time for a Scottish Stores or Parcel Yard half, just got a coffee and a sandwich and sat with an unscrupulous man who removed other reserved tickets so he and son could sit down!  If I told you he was both a West Ham and a Leeds fan living in North Yorkshire, would that help explain it?  When I got off the train at York, it wasn't just them, but Charlton and Brentford fans got off too!  I had to pop into York Tap for a swift half (i.e. pint) to recover.

So there we go.  South Yorkshire Tuesday takes me to two pubs from the same pub chain which will hopefully be lots of fun!  Before that, I might release my final archives tomorrow night if I'm not too tired after work.

See you around, Si