It was time for John Watson's stag do, and proving I'm an unselfish best-man, I didn't try and turn it into a full-on BRAPA pub ticking extravaganza, as tempting as that might've been.  Two new pubs and a few classics requested by the stag were the order of the day, and the worst thing I made him do was wear a Mansfield Town shirt for about 30 seconds!!

The Crown was our first port of call, with their amazing value high quality breakfasts, friendly staff (the scousest scousers in any Liverpool pub in my experience) and all that grand decor.  Okay, so I dropped half my toast on the floor, the back room struggled to warm up due to ceiling height issues, and a crazy landlady type person made us complete a Mitchell & Butler online survey so they could prove they are the best M&B pub in the world.  3 minutes my eye, it took about 15!  And a young girl pouted for probably the drabbest selfie session ever, in a dark corner by the door.  I drank Orange Juice from a Pepsi glass which was rather upsetting.

We took the train to Birkenhead (where Kathy Burke and Anthony Head were probably trialing their new double act sitcom) and with the Tranmere fans safely locked in Prenton Park for their 12:15 kick off, we had the run of a very barren part of 'town'.   But it had a BRAPA pub!

Well this was an interesting concept, as beyond the bar, a little raised area with a real life human man having a haircut!  Did he have a pint?  Probably not, but had the most middle-of-the-road 00's music sound track not been blasting out, all you'd be able to hear was the buzz of a razor.  Barbers or not, this was a cracking little pub and had I not been part of a larger group, reckon I'd have got chatting to the friendly bar staff.  It had lots of old military stuff hanging from the bar, stories about the H.M.S. Birkenhead, and loved my Brimstage ale.  What else can I say, I was in a group so I wasn't observing any crazy conversations or events, not that anyone else was here!  The haircut victim left, looking satisfied but knowing how many women I work with have had awful experiences at their hairdressers ending in tears, I think a Prosecco bar equivalent could be a great idea.

Back in Liverpool, we found ourselves at the recently saved Roscoe Head where a couple of grizzled old locals looked suspiciously at us as I spilt beer froth everywhere - don't mention we are a stag party!  Any guilt I might've felt about being part of a group entering such a small place were extinguished when a mixed group of old men, wives and kids decided to squash into our tiny room despite having the WHOLE PUB TO AIM AT - why do people do this?  The men chatted on pub issues, ignoring the female and child element.  If I'd found them annoying, much worse was to follow as a massive group of people came in and blocked the whole bar room, including our way out.  SIT DOWN!  You'd think there weren't any other rooms, well they are and they are all beautiful.  This pub is amazing and gets better each time I visit, I just hope Lion Tavern gets saved in the same way. 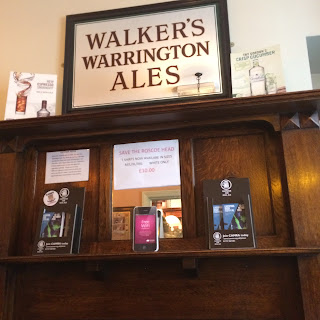 And just two streets away, my second and final tick of the day was this former HSBC which was supposed to have Irish leanings, being a whiskey bar though they spelt it whisky which as I know, and Mr Nicholls pointed out, is the Scottish version so that was one pub fail.  Another fail was the absolutely horrific artwork on display.  Clowns done in a 18th century classic style - well, it isn't funny, just upsetting!  On the upside, the young barman was a nice chap and ordering a beer called 'Northern Powerhouse My Arse' from an unknown Liverpool brewer was always going to more amusing than a clown, vaguely.  Black napkins replaced beer mats, I'd forgotten to bring an emergency one sadly.  The loos were pretty ornate (not quite Philharmonic standard) and there was a crazy lit up outdoor area which looked like a cross between a fairground and a drug trip.

After some cashpoint Jiggery-pokery, I took the gang to the Peter Kavanagh's which I loved before an Everton evening game once.  After a local scally photo-bombed me (it had to happen, it is Liverpool), we were in a very busy pub but still had time a have a nice joke with the very hardworking Spuggie-esque barmaid about Welsh beer pronunciation.  Luckily, I found a hidden room round the back and the three old men inhabiting it nodded at me in a respectful way when I appeared, like I knew my stuff (which I don't).  They were talking about sci-fi the whole time we were there, unusual for 70 year old Guinness drinkers, and "it is when the robots kill you that you have a problem" was the best thing I heard all day.  So we sat and played "York Pub Top Trumps", avoided a dog based stand-off, and admired a chair arm with the face of Gary Neville and Mackenzie Crook's love-child.  Pub of the day.

Next we had another John Watson request pub, Ye Crack which I came to many years earlier.  It was a lot busier today and the staff seemed to make such a meal of pulling the pints (my round), that a huge queue of impatient punters had formed behind me and I was glad we hadn't left it any longer.  The pub had a really great electric atmosphere, ultra friendly, and we found a big seat in the main bar area where we were reminded in true Scouse tradition never to buy the Sun, though one very odd thing was the beer me and Krimbo had chosen tasted just like Philadelphia Cream Cheese - yet it somehow worked!  Very odd. 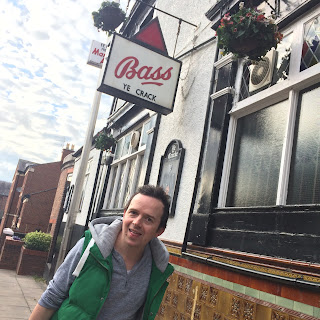 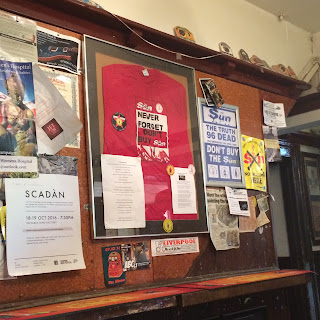 Next, I tried to give the Grapes a shot, being a BRAPA tick, it was re-open after a recent refurbishment and we were ready for tea.  I had noticed they were doing food.  However, we could not get within ten yards of the bar once inside, it smelt of paint, and was really bright and quite horrific looking, so may be wise to give it chance to bed in and judge it again on a proper BRAPA day, if still in the GBG on my next visit.

Instead, we went for an old favourite and my most visited Liverpool pub, the Dispensary with their amazing trusty Titanic Plum Porter which never let's you down, it is to beer what Kevin Sheedy's left foot was to Everton in the 80's.  The pub was even more heaving than the Grapes, so we gave up on food for now and TPP is practically a meal in a glass anyway.  Certainly one of your five a day.    England were playing Malta on TV, not that anyone was really watching, and those who were, seemed to see it more as an excuse to laugh at England's over-hyped tossers which suited us fine as we squashed near a shelf and partition by the door.

After a Big Mac meal on the train, and a game of "avoid the drunken Geordie racegoer scum" back in York, we said farewell to the stag who'd lost his voice, and the rest of us went in York Tap which looked like a warzone with sticky floors, pumps turned round, traumatised local drinkers, and a big raceday poo blocking the toilet.  Despite this, me and Jig stayed for a couple (Dark Star and Durham ales) and the staff did work hard to improve things so full credit, and that was the end of a knackering but excellent day!

See you after Tuesday when I make my not so long-awaited return to Sheffield.