BRAPA - Sheffield to a Finish : Part One

Bit of a strange city Sheffield, it seems so stretched out that you never really feel you are "in" a city.  Railway and bus stations excrete you from their backsides into two streets masquerading as the "city centre".  Before you can blink, you find yourself in one of the many urban wastelands of boarded up takeaways and second hand car dealerships.  The trams and taxis look at you piteously as if to say "this is no place for a pedestrian".

Kelham Island might sound like the kind of place where flamingos dance in lily clad ponds with golden frogs, but it's not.  The pubs however all seem to be wonderful.

And how on earth had I not been aware of this jewel of a pub before?  The CAMRA App GBG pushpin got me lost, before I found it hidden on an unlikely looking street.   I entered through an old corridor (always the best way) and found myself at the front bar, where I received a friendly welcome from a great blonde barmaid who looked like if Carla Bonner joined a hippy commune, got a pierced mouth and didn't wash for 2 years.  She was probably about 20 but still called me "luv".  It was time for my "pub tourist twat" routine I perfected in Scotland, this time I saw a businessman getting his pint topped up and demanded the same from blonde bar man, but mine was a LINED GLASS and I hadn't realised.  Schoolboy pub error.  At least we joked about it.  My pint of Shiny Pail was incredible quality, and two locals looked like they'd been placed here for the pleasure of my blog.  First, they moaned it was only getting darker now it was June 21st.  Then, they settled up a tab that had been running since lunchtime but with one more pint first (they did get a top up!) and then spied a bog standard mobile phone and were amazed by what a posh, smart device it was.  Meanwhile, it was nice to hear our blonde staff discussing pub/beer  strategy rather than relationship issues - take that Wraysbury!  Inevitably, a pub with such a fine range of both cask and keg beers is going to attract that vilest of customer, the BEER SNOB!  He slimed his way in, barmaid hated him from the off, he scanned everything for an age before sneering "hmph, well I'll try a Lime Dissection V2.0 Sorachi (I made that up) as it is the most interesting thing you've got on in THIS place!"  How NOT to endear yourself to folk.  He had a 'taster' before declaring it too interesting even for him.  He then slimed off again.  He didn't belong.  Superb pub.


After a walk back in the general direction of the station, hurdling as many 'don't cross here' points as possible, I'd found a fairly short route to my second and final pub of the evening. 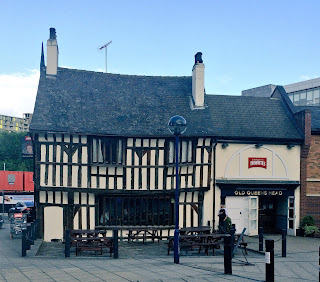 The overly wordy GBG description told me this was the oldest residential building in Sheffield still standing, and only just, judging by it's delightfully warped and creaky exterior.  I was a bit surprised to see a huge Thwaites sign as I wasn't in Blackburn, so I entered with caution and it was a bit of an anti-climax, with a modern interior, lots of shiny fonts, fruit machines, and a huge screen where a top heavy woman was gurgling because Northern Ireland were somehow only losing 1-0 to Germany.  I ordered the one Thwaites I didn't know, Summer Solstice, nice enough but not a patch on the Shiny pint.  I perched uncomfortably at the bar for two long minutes before retiring to a side room, so modern identikit it looked like a Lancastrian farmer had tried to follow an Ember Inns remit and gone slightly awry.  With the excitable strains of Jonathan Pearce echoing round the building, the football finished and Sheffield's answer to the Hairy Bikers arrived with what seemed to be fishing equipment.  They also possibly became the first people in the world to describe Robin Williams as "that chap off of Mork and Mindy".  It really was that kind of pub.

Train journey back was lacking in any kind of air, and a man with shades ate an apple very loudly in my ear'ole.  But I've got a taster for Sheffield now (yes, I need to do Hazlehead still!) and plenty more outer pubs dotted in impossible locations a couple of miles from the station, so may crack on with that over the next few Tuesdays.

See you after Saturday for my latest foray into Greater Manchester's mini towns of ill repute.