It is ten years this month since I first visited Derby from a real ale perspective, and I'm ashamed now to see how long it took me (about 8 years) to realise there was more to the town than the ghostly touristy Dolphin pub and the pointless 'which is the best?' rivalry between the Flowerpot and Brunswick.

The last two years have shown me that Derby has so much to offer, it might even be better than Norwich and York!

We were in the car again as Dad struggled down the side streets of Normanton (a very 'real' kind of suburb, to the south of town)  and parking was difficult near our first pub of the day where two tattooed grizzly looking smokers stepped out of our first pub of the day to watch our progress.  Dad commented "I think it'll be one of those 'swift half and leg it' pubs!"  I told him not to be so lame..... 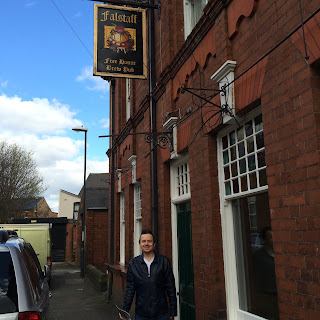 The tattooed smokers joked that we'd finally got parked and welcomed us in, as did all the other local chaps dotted around supping deceptively strong ales from the Falstaff brewery.  The first thing I noticed was the traditional pub smell, so reassuring, a bit like the smoking ban had come into force about 12 noon that very day.  A fantastic carved fireplace and bar area (and Dad spotted the old off sales) showed what a historic gem this was too, and it had a side room where people played pool and loudly sang old country songs (and a bit of Beautiful South).  The barmaid Nicki constantly looked fearful, not surprising when the locals had things like whistle on their keyrings so they could attract her attention!  One of our greeting party asked an unsuspecting chap if he could pull his underpants up, because he couldn't reach down there .... it was that kind of pub.  I'd heard a lot of ghost stories about this pub, possibly the lamest ever, ranging from 'once the snooker chalk fell of the bar' to 'someone left a key ring on a fridge and it ended up in someone elses overnight bag.  Spooky!   No wonder Nicki screamed whenever one of them said 'boo!'  The underpant victim heard us talking about pubs and stuff, and told us about a side room with great old pub memorabilia of a long gone Offiler's Brewery but sadly the room was closed.  This place was like a mini republic, I really hope that pubs like this exist in 30 years time but it felt like something from a bygone age already!

It was BRAPA's second birthday and what a pub to kick off the celebrations.  We even stayed for two pints and that hardly ever happens!  With the Bell & Castle not really having anywhere to park nearby, we ditched the car just to the west of centre and had a short walk to our next pub.

It was always going to be impossible to follow the Falstaff (the old Mumford v Metallica hypothesis), but this was a nice warm modern bar and a jolly young barman with a Peter Sutcliffe beard talked us through the range of Derby Brewing Co. ales.  The only one he didn't mention was the Dangeously Dark, so I went for that partly due to his beard meaning I couldn't trust him.  He'd also called Dad 'brother' which was an amusing touch.  The pub had a nice outdoor corridor entrance and with his Heritage hat on, Dad noticed different windows showing the side we were sitting in was much older than the rest of the pub.  The toilet doors were irritating as they had cartoon emo kids representing boys & girls, think a modern watered down version of the 1970's 'woman smoking a pipe' toilet signs of that pub in Macclesfield which has probably been closed for years now (obscure reference there, sorry).  As it was, I enjoyed my pint more than either of the Falstaff ones but there was no chance we'd stay on for another.

Just a couple of streets away was our next pub, another one I'd not heard of before and probably why I insisted on calling it the Golden Lion, but luckily a kindly West Brom man was on hand to point out the error of my ways .....

Another friendly welcome ensued (what's going on?  Was I really in the East Midlands?  Why has this never happened before?)  and a local father and son duo parted to reveal Titanic Plum Porter, I've shunned it for too long recently, and it was time to dive back in and realise it's brilliance.  In fact, combine it with some cherry tomatoes (Dad had a bag of them, as you do) and the flavours were even more amazing.  What a superb old pub this was, it looked only recently restored to some kind of former glory, all wooden and basic, and if you are a fan of the Peacock or the Furnace, you'll know the kind of Derby pub I am talking about.  And no-one was going to stop us eating our sandwiches in the corner.  Again Dad was spotting historic window frames whilst I just basked in the bliss, an old woman who looked like she'd stab me on a normal visit to Derby suddenly smiled and showed me which was the loos were.  If it hadn't been for the Falstaff, this'd have been pub of the day.

Back into the heart of the town centre next, I always am a bit suspicious of 'very' central pubs, but I needn't have worried.

With it's mock tudor frontage, I was expecting something grimy, sticky with families eating salmon and mash potato in the corner (I'm thinking Ye Olde Starre Inne in York, or Chequers in Oxford), so imagine my surprise when I discovered this was a proper classy old hotel.  It had been refurbished of course, and with an eye watering range of amazing beers on, though I doubt Martin Taylor will be happy that I shunned the Bass in favour of a pint of Maid Marian.  The staff were helpful and friendly, and the toilets appeared to be refurbishing themselves and there was nothing the pub could do to stop it (though possibly my take on the wording).  I now read that discerning drinkers head to a Tudor bar at the back of the pub, I didn't see this and just shows how undiscerning I can be a few pints in.  Sensing imminent Hull City disaster, Dad inquired on a sign advertising Salopian Vertigo (a so-called Black IPA) at 7.2% and glad he did.  The biggest surprise that Mrs Taxi Firm had never heard of this pub but knew exactly where Walkabout was - typical!  Time had shot on alarming quickly, perhaps the Vertigo was to blame for that.

We'll gloss over the next couple of hours, simply adding the words "inept", "woeful", "worse than Rotherham or L**ds matches" and "no hope of promotion but who cares".

Post match saw a long walk back to the car, but luckily it took us straight past a pub I'd been meaning to visit for ages now .....

Ignoring the bouncer on the door (who actually seemed to be a railway enthusiast with a luminous jacket and a bad sense of direction), this was where Derby County's more pessimistic fans had congregated post-match.  The idiots having gone to the Brunswick with all other Hull City fans.  It was another cracker, full of railway artefacts which might not be surprising being so near the station.  Beers were mainly from a local brewery I don't know called Clarkshaws.  We sat with some nice gentle rams and talked about wonderful pubs of Derby rather than football which suited me fine.  They agreed with me on key points like Huddersfield is a great drinkers destination and that Barrowhill beer festival is good but overrated and over busy.  Derby CAMRA was first formed here back in the 70's and this is now their current pub of the year, which was a nice fact to end a fantastic day on.

Onto Saturday then and thanks to a combination of Retired Martin and Huddersfield CAMRA, I can get a dead-cert pre-emptive in at Arcade Beers on Station St (11am) before heading to 1 or 2 classics to see us through to 3pm, and if Tuesday was anything to go by, I'll need to be well-oiled again!