It seems a long time ago now but I started my most ambitious (hardcore) BRAPA trip on Saturday.  Four solid days of pub ticking across my "in-focus" county of Berkshire.

It had been snowing in West Brom  overnight (it's amazing what facts you can learn from Twitter) and it felt icy when I arrived into Thatcham about 12 noon.  First problem, the isolated village of Curridge was a LOT further than I thought, no busses so I rang for a taxi.

This pub looked fairly welcoming and was warm despite it's lack of GBG listing,  and there rather cruel decision to stock an ale choice of Marston's Old Empire or Theakston Old Peculiar (totalling an aggregate 11.3%) did not bode well for my first day, as we'll see later!  The young barman eyed me with suspicion (a stranger in their midst!) and Thatcham felt very much like Tilehurst, a grey characterless sprawling mass of gloom and despair, with dead-eyed locals and shifty people at their wits end asking for money or cigarettes.  Still, the pub had some nice cosy areas and a proper hubbub, though the beer was a bit thin.

My taxi driver was hardly Mr Jolly despite my best efforts (he was listening to Stray Cats but despite my shared love of Brian Setzer, he still seemed unmoved) but he performed his sole function of dispatching me at Curridge, and glad I hadn't risked the 4.5 mile walk when I looked at how pedestrian friendly the roads were!

So named because the locals used to "bunk" off work to come here.  I suspect their work places (blacksmiths or forges or whatever) might resemble the quintessential pub more than a lot of the so-called modern pubs and this was an interesting example, you could feel the oldness with the low ceiling, wooden boarding and a comfortable feel, but I struggled to fully embrace it (especially when the question "how the heck do I get back to civilisation?" was in the back of my mind.  Despite me being about the only customer, the barmaid seemed to be running around like a stressed headless chicken, perhaps an influx of lunchtime people were all booked.  She was a friendly lass though.  I read the pub had a head-chef who did "carefully crafted seasonal classics" so you have to treat these things with caution don't you?  Especially when a young white shirted man with a puffed out chest appeared from the kitchen prowling around like a highly charged Andy Murray.  The ales were courtesy of a Hampshire brewer called Upham and my Sprinter was a nice sessionable thing after the cruelty of the Old Empire!  I read the 'Ullage' CAMRA mag, got my GBG out (wa'hey!), and probably looked like the biggest pub geek they'd ever had in here, they had some cracking old country music on too!

Despite serious phone signal issues, I somehow channeled a taxi to take me the shorter distance to back towards Cold Ash.  I promise you purists, this was all my taxi'ing done in the entire weekend (almost).   This taxi firm was a lot more lovely (probably because he loved the BRAPA concept - gosh, I'm so shallow). 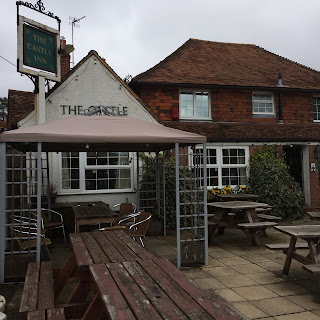 So here's a question for you pubbers.  Which demographic of society do you find the friendliest and smiliest in pubs?  The old boy at the bar?  The buxom barmaid?  Perhaps the pub pet?!  Here, it was teenage boys, unusual I know, but they were all really smiley whilst other family members moped around like Thatcham's escaped lost souls.  I liked this pub, very homely and traditional like something you might find on a Birmingham side street next to a curry house.    Most of the ales were from Butcombe which I'm sure is still down in Devon last time I checked, the Gold was good standard, though the horrible Adnams "vase" spoilt it a bit.  A spaniel trotted over and made a play for 'BRAPA pet of the year' award but it was a half hearted effort and when it saw two bigger dogs at the bar, it went over to show them it was the boss.  Though there was a fair bit of food going on, I'd found a seat tucked around a corner so I could really appreciate it for the pub that it was.

After a long and gruelling walk back to Thatcham where I somehow got lost, I hadn't timed it well for the train so I completed the 'Swan' cycle with a half of the Old Peculiar this time, though with a load of old chaps ordering Tuna Mayo sarnies, I went outside to shiver in the beer garden like a martyr!

Having checked in at my Reading Premier Inn (proper Lenny Henry comfort guaranteed), I had a wander round it was nice to see how much Reading has improved as a town in the last 5 years.  It is to British towns what Steph Scully is to 'Neighbours', had a dodgy rough biker spell back in the late 90's/early 00's and has now blossomed into an eye-catching thing in the intervening years (but maybe still avoid after 11pm). 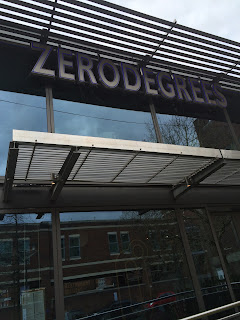 I think I walked through the wrong entrance as I had to negotiate a series of expectant white-shirted smart male staff.  I asked one "where's ya bar?"  "Yabbar?  Never heard of him!" was the reply.  Oh dear, not a good start.  Am pretty sure I've been to Cardiff's Zerodegrees but not been confident enough to 'tick' it, anyway I vaguely remember there not being able to get the Mango beer - but here I did, and despite it's lager-esque tendancies, it was a real grower despite another funny glass.  It was, as you can imagine, a quite sterile modern bar but funnily enough it had quite a pleasant comfortable atmosphere, and watching a stony-faced couple in the death throes of their relationship was just the kind of classic entertainment the solitary pub goer looks out for.  The door I should have used was an automatic sliding one, in a pub?  Crazy stuff, surely that's not acceptable!  But despite it being easy to critcise (and the appalling toilet decor!) I have to say I didn't dislike this place.

A short walk took me to an unpromising looking grey and white building near where the  football busses stop.....

Inside was a really surprising hustle and bustle of mainly thirtysomethings all jolly and enjoying the best range of ales I'd seen so far.  The staff were quite young with tattoos and beards (well, not the girls) and I ordered a Red ale from Ascot which I have to say was the best beer I had in the entire weekend, and totally finished me off for the day!  The lack of seating meant I had to perch at the side until a couple moved, but the staff opened the side door allowing an icy blast to enter - everyone seemed to welcome it based on the fact it'd got too stuffy but despite being an 'ard northerner, I was feeling the pain.  Sir Quinno of Twitter fame arrived with his friend James (who looked a lot more like a Michael) so they could give me a greater insight into the Reading pub scene / have a few pints before their party in Caversham (delete as appropriate).  They didn't mind about the open door either, I couldn't believe it.  Then, a jolly man walked in who they knew, he was the landlord of the Fox and Hounds in Caversham which was on my list for later.  As a side note, the only Hull City fan I recognised on Tuesday night was "Big Dave" and he had been sampling a LOT of Greyfriar beers and was raving about the place.  Good pub.

We then walked through Reading (no idea what we did) to get to a pre-emptive tick which is a "shoo-in" (thanks Tim!) for the next GBG (not that I know that officially or owt!) .....

We walked in through a little back room (my memories are hazy by now) which might have had football on and then outside through a little courtyard and into the main bar area, which again had a great range of ales, my Giraffe from XT was delicious and red again, though on my beer app I was more concerned with what noise a giraffe makes which probably says a lot about my increasingly fragile mental state.  Now I'd been expecting this to be like a micro-pub (because I mean what else opens these days?) so it was nice to see proper modern style pub dedicated to it's drinkers.  I perched on a radiator on the right hand side, chatted, drank, then we went to pick up Lady Quinno for their party and wandered to Caversham.  This might be a good pub to return to when Hull City play Reading next season, perhaps with the Butler and Forresters pubs which are also pre-emptive.

After pointing me in the right direction, I said farewell to the party gang and was now in one of those pubs where you just think "ahhh, this is how a pub should be".  Loads of ale, happy people, friendly staff.  No idea what beer I ordered but it was quality, I then reflected on how great pubs on the south east of England tend to feel like this one, the Globe at Dunstable sprang to mind ..... and then I was asleep.  And I awoke probably about 20 mins later to find the landlord (returned from his Greyfriar expedition) smiling at me!  He reported all this to Sir Quinno, oh dear, how embarrassing but at least he reported I was a "polite young man" and he was happy to leave me to sleep for a bit!  Unlike the evil but brilliant Black Lion in Leighton Buzzard!    I drank up and left in a happy state......

It was a long walk through Caversham to my final pub, nearly dark when I arrived, worse I guess when you are doing laps of the pavement!

When you are in a hazy 'last pub of the night' state, the last type of pub you want to visit is an Ember Inn.  Even on their portfolio, this felt pretty characterless when compared with, say, the Selly Park Tavern or even the one in Edenthorpe.  Still, staff were polite and I'd sobered up enough to remember to use my free Ember ale (brewed exclusively by Black Sheep zzzzz) and it was a perfectly okay pint.  It reminded me of an estate pub I once visited on the outskirts of Bedford called I think the White Horse, but without the Rod Stewart karaoke - that would be too quirky for an Ember Inn.  Everyone watched the Newcastle game on a giant screen as though it was a 'live' match, I think they thought the clocks are a few hours behind in the north east judging by their semi excited reactions to the relegation battle in the Premier league!

I had the worst hangover at 4am when I woke (in my Premier Inn, not the Grosvenor) but had at least learnt my lessons to pace myself for the rest of my Berkshire tour!!  I drank water, watched snooker and then went back to sleep til 10am.  Join me soon for a less messy review of day two.