Henry VIII of course had six wives, but Bedfordshire VIII had only five pubs as my plans to go to Renhold / Salph End were both divorced and beheaded as my bladder lacked the strength of a heroic monarch when I arrived back in Bedford late afternoon.

Enough of this questionable Tudor theme, I was already past Peterborough when I devised a third strategy which meant going to the village of Riseley first.  This pub was never on the agenda until I realised that there was both a sensible bus service, and a pre-noon pub opening time.

Having almost remortgaged my flat to allow me to pay for a black pudding floury bap and freshly squeezed orange juice at Kings Cross, I was in a Bedford pound shop at 11am buying a hat as it had started raining quite steadily.

As typical of Bedford's locals, comments suggested a total lack of faith in local bus services and there was almost a standing ovation as the 28 turned up only 2 minutes late, the driver having had a quick coffee break was by the far the jolliest Bedford bus driver ever.  Well done to him,

In a village a few miles North and quite rural, I was not too surprised to see elements of the old 'gastro pub' rearing their ugly head.  A side room with knives and forks and placemats to the right, and a 'butchers counter' to the left.  It took a while to find a member of staff, and when he did, he came from the butchers bit and looked a lot more like one than a beer seller!  I found a surprisingly good ale, 'Thirst Blood' (it's that time of year) all the way from Hartlepool and it had travelled well, a very bitter red rye ale.  Despite foody elements, this pub had a low roof, creaking floorboards, a nice beamed interior, and therefore I could forgive it.  Besides, pubs in these parts are always going to struggle on "wet sales" alone and with beer in perfect condition, I had to commend it.  I sat by the front window and noticed as we got to 12 noon, hungry diners started to turn up quite regularly looking for slabs of raw meat (presumably) to sate their ritualistic village urges.  I'd been playing one of my fave pub games "Where are the gents?" not realising the door was right behind me which was typical of my pub toilet luck over the years!  At least the landlady found it amusing.  I'd rung for a taxi deciding a bus back to Bedford to come 3 miles west of where I already was didn't make much sense.

And what a good taxi it was too, GPS Taxis of Rushden deserve a plug.  The lady on the phone told me I'd have to pay for the call out too, they stuck to the cost quoted, and the driver was a very nice chap even if he did once see Madonna in Roudhay Park (performing on stage, I think).

If I thought Riseley was quite remote, Souldrop was incredibly so.  The rain was pouring down by now but I entered a much more basic pub to a welcoming smell of a sooty coal fire.  Is there a better pub smell?  There were a fair few customers at the bar, and the young landlord insisted on giving me a try of 'Trench Dog' even though I told him I'd risk it!  I'm not sure if this was to try and win staff points or because he thought it was disgusting.  Anyway, it seemed like a solid English bitter which was my first try of a beer from Kettering's Thirsty Kite brewery.  Rushden taxi?  Kettering brew?  I'm so North Western, I'm practically Northants!  The fire looked inviting but two women were sat there annoyingly, but I smiled at them and tried to look wet and uncomfortable and within two minutes, they'd moved.  Result!  The pub may well have had a nice garden and conservatory, but this was surely the only place to be on a grey October lunchtime, any food element was not as 'in your face' as in the last pub.  Before long, I was joined by John and Diane - two members of a walking, adventuring group not taking part today due to John's bad back.  After their obligatory lesson in BRAPA, John felt guilty for drinking Nastro Azzuro and I couldn't hide my disappointment, shareholder or not!  They do things like abseiling which is impressive, though give me pub trekking any day.  As the walkers started to arrive, it was time for me to brave the rain for pub three.....

The pound shop hat proved to be the best pound spent of the day as I walked 2 miles to Sharnbrook, it didn't take too long along typically dodgy country roads and the sun had even come out by the time I arrived.  My soul had been lifted by Souldrop and I was expecting big things....

I was glad to see this pub added to the 2016 GBG as it linked up Souldrop and Felmersham in my mind.  But it lacked a traditional pub homeliness of the last two, lighter and airier with the main problem being a table of ten studenty geeks who seemed to specialise in science, maths and technology.  It was a bit like listening to an English pilot remake of the Big Bang Theory but without the humour.  One bit that made me laugh, one girl said "they say you should be nice to the techhy geeks in your class because they're the ones who'll be your bosses one day!"  Everyone laughed in agreement but with no sense of the fact that they were in fact, these future bosses.  Of course, none of this was the pub's fault, and the barman who served me was friendly and very good, whilst other staff buzzed around clearing away plates and stuff.  The beer range was a bit disappointing, but a Charles Wells Eagle IPA at least gave me opportunity to but into action an Untappd check-in I'd been rehearsing on the train journey.  By the time a young smart waistcoated man came in and started stressing out on his mobile phone, I realised by set expression in here was a scowl.  I tried to relax but I couldn't even get a phone signal to switch off from what was happening around me.

The key to the next leg of my journey was a quick march along more country lanes to my next village so I had 30 mins in the pub and time to get the 15:01 bus back to Bedford.  It worked out well.

A recent pub of the year winner, I recognised the young landlady and hubbie from the pictures of them winning awards on the North Beds CAMRA website, and I was served a magnificent pint Hart No 9 from somewhere in Northamptonshire.  Grapefruit tastic.  The pub had a thatched roof which was a nice quirk and to show my limited knowledge of thatched roofs, I was worried the rain might be a problem!  It wasn't of course.  Anyway, this pub was all about the skittles!  I'd seen an ancient 'hood' skittles table in Souldrop, I'd seen one in Broom a few months ago, both looking a bit lonely, so it was nice to see the entire pub giving this one a bit of hammer!  I sat in the corner, behind the arm of the 'thrower' and I got thoroughly engrossed in it - glad no one asked me to have a go.  The pub dog did fence me in by laying across the floor, so my hopes of having a snack from my bag were a no go.  The best player from what I could see was the oldest man in the pub, I think he's probably been playing it for about 100 years and there was lots of 'banter' about his age but it didn't put him off.  Christine had text me from pre-match Hull City to say she used to compete in this pub's skittles league in 1982, my fun quirky fact for the day.  And as I watched, I figured this free entertainment was better than watching Hull City v Birmingham.  And I still remembered to catch my bus.

The bus was delayed, and arrived at a different part of the bus station to what I was expecting so I might not have made the Renhold connection anyway, not that I was really looking for it by this stage.  After a quick nip to the loo in Bedford Arms (the Bedford version with live music going on!), I walked up Newnham Street way where I'd stayed overnight on my inaugural BRAPA trip in April 2014.

And it was nice to be back to in the town where it all officially began, this pub winning one of those 'most improved pubs of the year' awards which I suspect, as a wise person once said, all depends what standard you are improving from!  As it was, it felt like a suitable dark and dingy (in a good way) street corner local with low ceiling, three Young's ales (I went for the 'Special' just to knock me out) and nice townie hubbub.  In fact, an egg-chasing semi-final was on so the locals were around it like cat-nip to a moggy.  With all the focus on this, I finally felt comfortable enough to tuck into my eclectic selection of food I'd brought (ever eaten half an avocado with a spoon in a pub before, I have) and I dozed gently whilst people got excited about all these New Zealand and South African's chasing an egg around and pretended I was semi interested, Bedford really is a Rugby Union town.  The staff were good, even looking expectantly at me as if I might order another drink.  A solid addition to the Bedford real ale scene though. 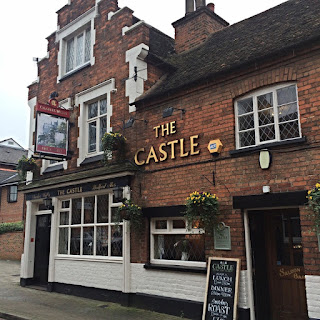 As it was, I decided to give up on any vague Renhold hopes and get back into London early having had bad experiences in the past!  Time had marched on anyway and the sun was setting on what had been a classic BRAPA day.  I shunned a Parcel Yard pint in favour of a sandwich and drink, and didn't even call in at York Tap/Maltings/Brigantes so must have been in disciplined mood.

Just the one pub off my 720 target by the end of October so I'll achieve that easily barring some kind of mathematical tragedy.  Knottingley on Wednesday is having to be shelved however, but it's all go for my Hallowe'en BRAPA special on Thursday, plus a trip to Milton Keynes on Saturday to end a productive October with hopefully three new pub ticks.

Bedfordshire (42) meanwhile, has gone back above East Yorkshire (39) into 3rd place in the BRAPA league table, I think only three more trips are needed and I'm looking to finish it in January.  This means that I should be able to start on Berkshire in Feb 2016 with a trip to the highly anticipated heritage pub at Aldworth, plus a few others west of Reading.