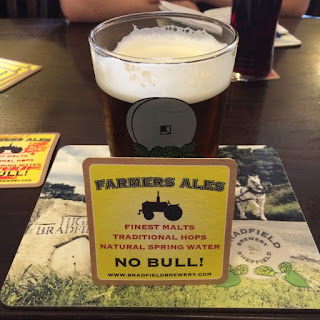 South Yorkshire maintained it's 6th placed position in the BRAPA league table after a great five pub day.  I managed to achieve some 'ticks' I've been after for years, there was a 'brewpub' theme, and I got a couple of pub shaped monkey's off my back at the same time.

It started in a drizzly Sheffield station, where I learnt the tram stop has it's own opposite exit and soon with Dad and BRAPA transport aficionado Tom, we'd bussed and trammed through some of the more 'third world' areas of the city (yes I am a snob) and were in beautiful Loxley countryside, with it's walking and angling meaning the pub was a 10am opener, yes!

In Stacey Bank and not really Loxley if you were to be pedantic, Dad was a bit concerned whether they'd stick to the opening time, it was a relief to see a jolly woman (landlady?) sweeping up Autumn leaves outside as she accidentally photobombed the inaugural BRAPA shot of the day.  We entered and I was amazed to see the pub so similar to the view in my mind's eye, wooden farmhousy, basic but with comfy bits further back.  It was great to see the superb Bradfield ales on, a huge range so I plumped for a Jack O'Lantern, my first Hallowe'en beer of the season.  Quality stuff.  And was glad I'd recommended the Farmers Blonde to Dad.  Prices were dirt cheap.  The barmaid was a young, croaky mare, but once other staff and locals were on the scene, she managed to overcome any vocal chord incompetence and soon we were back in the unnecessary SHOUTING match that had plagued us at Pollington, but even more out of place as here was so intimate and down to earth (can I get a shouty first pub of the day hattrick next week in Bedfordshire?).  Barmaid did redeem herself for lighting the fire next to us.  Dad then cracked under the pressure of seeing a father & son with cooked breakfast and soon were all on 'em.  We had more time in here than your average BRAPA pub, so gave us a chance to savour it and do the kind of things you wouldn't normally get to do in a BRAPA pub, for example pick 5 celebrities you think are most likely to die!  As I desperately tried to hoover up the last of my mushrooms, the bus was 4 minutes away and we sadly had to leave.  If I was a Sheff Wed season ticket holder, I know where I'd go pre-match!

After a classic bit of Tom bus/tram manoeuvering to help us beat the football traffic, we were at our next pub though we nearly walked past!

I'd been itching to come here since 2004 when we tried but found it shut before the midweek 2-4 victory.  Again, I'd built up an image in my mind but it wasn't quite the red carpetted one roomer with horseshoe bar I'd expected!  The place was in a state of chaos when we entered, not through football fans trying to have a quick drink or just the usual 'opened this minute but not ready for customers' scenario, but there seemed some bigger change had taken place, change of ownership Tom thought, but am not sure we had any evidence of that.  What was strange however, was in a Bradfield/Loxley way, we were expecting to see lots of Wood Street beers but instead 4 of the 6 were from another Sheffield brewery, Exit 33.   The barmaid was new, didn't know where anything was, and was a QPR season ticket holder, but we tried not to hold that against her as she chatted to us whilst we waited.  I'm not sure the man on my right can have been so impressed, him and his wife had to wait an eternity to get served, and when they did, they realised they were in the wrong pub, having wanted the Hillsborough Tap!  Dad had controversially gone to sit in an incredibly light and modern conservatory area, it was almost like being outside and didn't do much for the atmosphere.  Having said that, the place was comfy enough and my Exit 33 IPA was perhaps even more delicious than the Bradfield ales earlier.  Quite a good pub, will be interesting to see how the changes bed in.

Our original plan had been to get a 'tick' on the way back to Sheffield station, whether it be in the Kelham Island area or more central, but as it was we played safe and headed straight for station,  However, with 20 mins to spare and full bladders, we nipped into Sheffield Tap for a very swift half though Tom correctly pointed out this broke BRAPA policy!  Dad then did his usual ST ritual "I hate this place, I hate this place, I really hate this place, oh I've been served, oh look, a nice quiet side room, oh this place isn't quite so bad!"

Anyway, a short train journey followed and we were in the wonderfully stereotypical South Yorkshire town of Mexborough.

Another pub (club) I've had on my hit list for many years pre-BRAPA, me and Dad were a bit anxious on entering because (a) it is a club and sometimes they can be a bit funny about non-members and (b) they were due to close at 3pm and we were pushing it with time.  Tom, having been before, was more confident and we needn't worry as the friendly welcome we'd hoped for ensued, in fact they barely batted an eyelid at our presence, what a relief!  The theme of home-brews continued with their own Concertina ales, so I went for the award winning Bengal Tiger and it was very nice indeed, take that Sixpoint brewery of America who sell cans to Wetherspoons with a very similar name.  The main band room was huge and splendid, but I sat us in the games room mainly because if there was an end of year BRAPA award for 'worst coloured table of the year', this hideous sepia yellow example would have won hands down!  Okay so it wasn't the cosiest pub of the day, but the sheer down to earth, no nonsense brilliance of it shone through.  A cracker, and for once, CIS (Chris Irvin Syndrome) did not take hold!  And what happened to the 3pm closing?

It was great Dad had come to Mexborough with us but we went our separate ways now as he got a train back to York via Donny.  Me and Tom remained the hardcore two, pushing on to the next pub....

Hiding down the edge of an industrial estate, we found our next pub, the home of Imperial brewing you won't be surprised to know.  We hadn't planned today like this, honestly!  It reminded me very much of the Cock o' the North pub I went to in Hipperholme with the Halifax Steam beers in an huge industrial style converted into something lounge like and comfortable.  As we trekked over the swathes of blue carpet to the bar, we found not only their own ales but plenty of interesting Locales too but it was only polite to go for one of theirs, a Blonde of top quality.  We sat to the right and the place was quite busy with mainly middle aged drinkers as I gave Tom his highly anticipated learning module of Untappd check ins (though he did encourage me to be abusive about Sixpoint brewery!), his next module is on Instagram.  Just to show I haven't learnt anything from my Leighton Buzzard day, I soon found myself dropping off - a combination of the comfy surroundings, the fact I forget to get the Corned Beef sandwich off Dad, the Loxley breakfast and the colour blue being calming.  Nothing beer related HONEST!  Anyway, Tom who'd been buoyed by finding a bottle of Farmers Stout to buy earlier, now managed to buy an Imperial bottle from their fridge.  A good result after my Twitter contact with them last week.

Next, we took one stop on the train to Consibrough, we then had a bit of a walk before boarding the X78 which took us towards the pub, even if the miserable bus drivers weren't a fan of our PlusBus ticket!  Having Dad's senior one by mistake probably didn't help things.

But it was worth the effort - as we entered the left hand side of this cosy two roomer, and I kept my record up of accidentally selecting the room with the fewest amount of locals and hubbub!  It didn't matter though, we were soon chatting to the friendly couple who ran the pub.  I managed to get a bit of BRAPA chat going, and Tom then earned us maximum brownie points by telling them about '2' for 1 rail ticket offers for their trips to York - we'd been lamenting ridiculous beer prices in the city in comparison to say, this pub for example!  The range of ales was again an impressive cornucopia of micro brews from the South Yorkshire area and I had a brilliant 'Original Blonde' by White Rose - a Sheffield brewery I'd not even heard of.  Just when we thought we'd finally found a pub without their own brewery attached, the landlord pointed out of a window to show where they would soon be brewing their own ales!  Well, when Custom & Excise give them the go ahead apparently.  We had an even longer walk back to Consisbrough station after the bus but never mind, this was probably but second favourite pub of the day, well worth a visit.


So there we go, I wished Tom bon voyage as we headed in separate directions.  I had a bit of wait both in Consibrough and Donny where I had a shortbread and lemon n lime drink in a half closed cafe.  I avoided York Tap too and was home for about 20:30, a successful day indeed!

Just to remind you, no BRAPA this midweek but archives will be out Monday and a "Special feature" later in the week if I've got time.  Then Bedfordshire next Saturday.  The feature will be about 'BRAPA pub do's and don'ts for any prospective pub landlords reading.  Well, I can hope.