I'd still not fully recovered from my Staffordshire epic, as I boarded the train to London on the evening of Friday 1st October, for a double overnighter in Herts.

Staying over hadn't been my original plan, but when I learned that our guest BRAPA chauffeur wasn't available until Sunday, I decided a Saturday night stop was required.  That soon extended to the Friday when I saw Sunderland were away to Pompey the following day - I was on a free Grand Central with no seat reservation, and didn't fancy standing for the duration.

A nice speedy pint of Thornbridge Jaipur (the ESB of the North) in York Tap (the Parcel Yard of the North) put me in good spirits early doors .....

Speaking of the Parcel Yard, I was very excited to be getting a train from one of those platforms underneath and behind it, 10 or 11?  Well, something Cambridge Northie, it doesn't take much to excite a northerner in t'smoke.
It was dark when I reached Hatfield, where I decided it made zero sense to check in to my Travelodge and then walk all the way back to the pub, so pub it was first.
Colin must have sneezed from my rucksack at the time I took the photo that mattered ...... 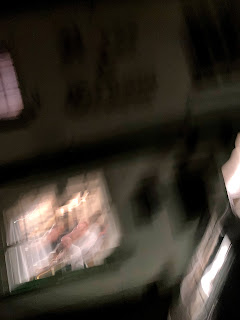 Horse & Groom, Hatfield (1987 / 3416) is the pub in question, if you were in any doubt.  A shallow area between front door and bar is not what you need when you've got a massive rucksack on yer back, and one barmaid is frantically trying to serve a three deep queue!  One of those moments you think 'mustn't grumble, I'd much rather this than a return to the 2020 ways'.  Now I'm permanently working from home, standing at a bar is one of the few times I feel alive in that 'jostled by the scummy general public' kind of way.  No scum in here though, in fact a Kindly Dr Shipman allows me to go first as he can see that I'm thirsty and he is in no rush to pay his bill and leave.  Cheers KDS.  The pub is an old fashioned basic number, summing up the authenticity of the Herts GBG scene.  I feel a bit isolated on my bench, as post-dining groups gabble aimlessly with a final round of drinks.   Ghostly Sara Pascoe orders herself a second wicker basket of prawn crackers, impatient Ed Sheeran is frustrated in his efforts to be served, the sociable landlady is walking around chatting to various locals.  A lady who I thought was glancing over eventually comes over.  She blanks Colin to my surprise and says "ticking the Good Beer Guide?  Fair play to you.  My father is ticking off every Good Beer Guide pub on the Tube line.  He'll never manage it hahaha, but I just wanted to come over and say I love your dedication!" and before I can muster much of a reply, her and her partner are outta the door.  Well that cheered me up, and made me look even more favourably on this low key little cracker. 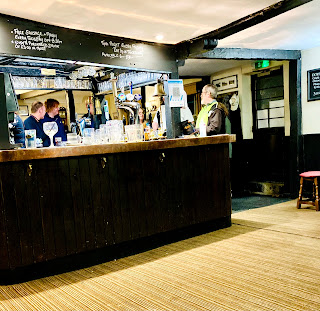 A long stride takes me back to my old fashioned Travelodge, where I bolt myself in, ready for a six pub Saturday. 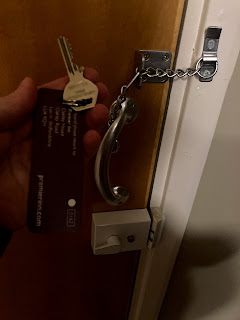 And I think I have time before my evening Ovaltine, cheesy crumpet and Prisoner Cell Block H episode 445 (the rock n roll life of BRAPA on a Monday evening) to tell you about the first three pubs of that day.
Hatfield made no more sense to in the daylight than it did at night.  Does it have a centre?  Shops?  A community?  It just feels like a tarmac coated pile of grey nothingness.  I must've missed the beautiful bit.
Of course, my train was cancelled.  Of course, it started raining cats and dogs.  I bought some food for later, coughed up a good lung of phlegm, and thanked my lucky stars that being in the south, the next train was only half an hour away. 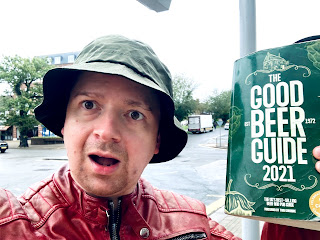 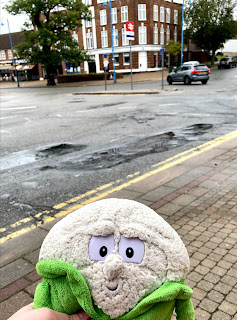 Welcome to Potters Bar!  An old lady accosts us, expecting me to know where her bus is.  Google Maps has the answers.  We make a lame joke about the weather, and I head off for my morning Spoooooons: 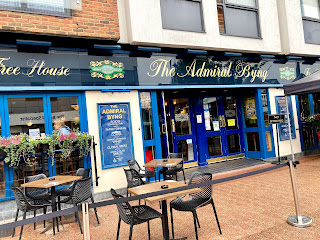 No need to execute me for failing to do my utmost in duty like Admiral Byng, Potters Bar (1988 / 3417) , I made the most of an experience I wasn't expecting too much from.  The thing is, 'Spoons originated in North London, and that obviously extends to South Hertfordshire, for those late 80's / early 90's examples are generally more rewarding than your 21st century builds.  The beer was immaculate (£1.49 a pint with a beard voucher), service tolerable, the quartet of codgers knew each other but barely uttered a word in the thirty minutes I was here, apart from a brief furore when a well meaning lady from the leisure centre recognised Keith, problem is Keith doesn't recognise her.  "Oh well, it has been a lot of years" she says shuffling off embarrassed, the poor cow.  A man from East Lancashire wearing a Hawaiian shirt for no other reason than he knew he was closer to the equator than he is in Burnley ordered scrambled eggs and not much else.  A delightfully surprising 'Spoons effort. 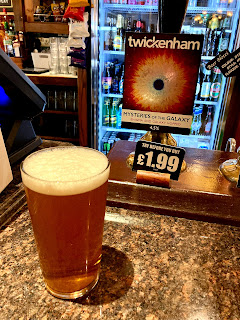 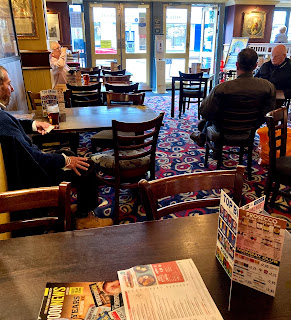 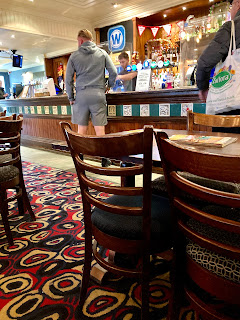 Time for a bus to an outlier, can't stay on a train line all day, makes me far too guilty that I'm making pub ticking too easy on myself.  Unless you're in West Sussex of course.
The rain is coming down sideways by now, and about half way to the destination, the bus driver suddenly stops in a puddle and honks his horn at an elderly lady facing the wrong way.  Wow, the benefits of being a local, I basically have to jump in to the road to get buses to stop for me in Herts.  And even then, no guarantee.
"You getting on?" he asks her?  "No, not today" which really begs the question why is she stood still in the driving rain next to a bus stop facing the other way.  I expect that to be the end of things, timetables to stick to and all that.  But the driver persists.  "Feeling any better?" he asks her.  "Breathing a bit better ..... but I still have no saliva to speak of!" she bellows for all the bus to hear.  Suddenly, my mini cheddars seem less appetising and I put them back in my bag for later.
The bus dumps me on a dirt track by a huge roundabout gridlocked with traffic, and I have a longer walk to the pub than expected, please please be open ...... 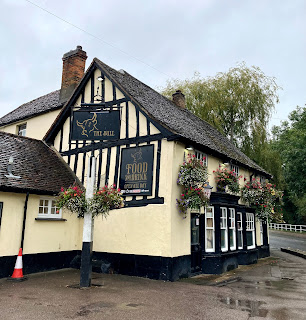 Yes, I can't deny I was nervous, incredibly dark inside the Bull, London Colney (1989 / 3418) but the door just about opens with a creak.  I say 'ow do' to a bloke by the bar, to my left, a cabinet full of over 300 miniatures, just like one my Grandma used to have that we inherited when she carked it.  I've always wondered what Guinness from the 1950's tastes like, I could find out if I really wanted.  A bloke messing around doing DIY behind the bar seems to be distracting the staff, for even when I do get my pint of Side Pocket for a Toad, she forgets and I'm stood there 'politely' for five minutes before she remembers.  In this time, a child called Monty has managed to acquire a hot chocolate.  Some kids have all the luck.  The pub has a weird smell to it too, not Swan Bushey farty, but a bit damp or something.  I'm not too convinced about the whole pub experience until the Tom & Jerry tee shirted barmaid dashes over to ask about the GBG ("Big book that!" was her opening gambit).  Col, on the table at the time, is ignored.  He's devastated and never really recovers.  This sparks the local (ex lorry driver, now drinker) into life, and he soon is telling me he doesn't agree with the order I'm doing the pubs today.  With croonery 50's music now tinkling away, my opinion of the pub has increased tenfold in the past ten minutes.  Had I downed a ten minute half and rushed off, no way I'd be saying such nice things about this place.  So I'm glad it worked out like this, bit of a gem which feels like a GBG mainstay. 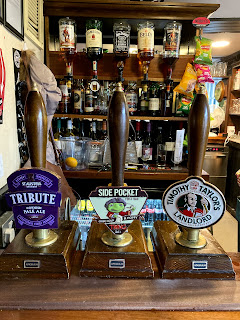 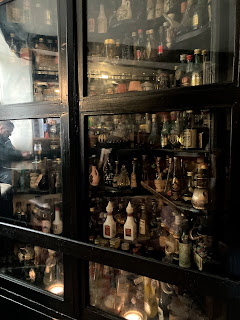 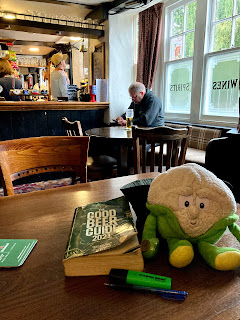 Our lorry driving pal thinks I should do Colney Heath next because it is geographically closer, but to me, the bus route I'm on stops nowhere near it, the walk isn't really on especially in these conditions, so I hop back on the same St Albans bus where I have the two GBG ticks I missed on my recent visit with Daddy BRAPA.
I did not expect to be returning so soon but the gravitational pull of the home of the GBG is obviously strong!
I hop off the bus early, which seems to save me a good few minutes. 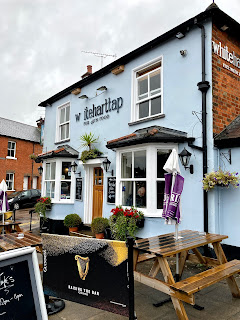 Felt like a bit of a serious beer drinkers pub from the get go, as I clomped into the bare boarded main bar at White Hart Tap, St Albans (1990 / 3419) and as I survey the plentiful ale range (opting for an Atom from Hull in the hope it'll bring the Tigers much needed luck v 'Boro this afternoon) the landlady asks me 'where are you sitting?'  I'm about to reply 'none of yer beeswax mate' when I realise why she is asking - ohhhhh it is a throwback to table service only days.  #Retro2020.   I point randomly at the nearest empty table and she comes over with my pint and card machine.  #Throwback #Vintage.  Yasssss.  It is a lively pub, the acoustics a bit too intense with not much carpet to soak up the volume.  The pub is deservedly popular and I note the demographic is almost all one type - a rounded, balding, bearded bloke in his fifties.  Home of CAMRA?  The stereotyping is far too easy, but I'm more concerned as to why four different people have photographed something on the wall close to my head.  I investigate expecting to see a blue plaque or some bawdy humour, but it is the Specials Board, so somewhere hidden, there must be plenty of food going on.  An adorable yapping dog opposite is making a right fuss!  When I pick Colin up, it crouches as though I'm going to throw Col in its direction like some kind of doggie toy.  Outrageous.  Little did I know at this point, I'd be tasting the other side of Hertfordshire pub doggery the following day.  That last sentence sounds more sinister than it was supposed to).  Cracking atmosphere in here though wins the day over the minor gripes, beer superb (at £4.80 a pint it bloody should be).  See, I can't stop griping!

One more St Albans pub to go.  I will tell you about that, Colney Heath, Welham Green and the beginnings of my Coxy day tomorrow, or Wednesday, depending on whether a lad called 'The Wedge' wants to meet me for a birthday pint.