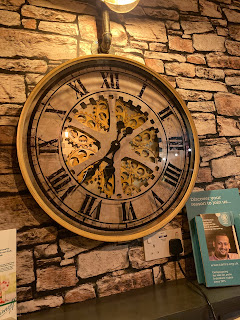 Careful what you wish for.  I remember actually thinking that, in my own head, as I waltzed down to York station, 4pm on Thursday last.  'Oh, what a shame my ten minute connection at Donny doesn't allow time for my now regulation pint in the Draughtsman - my station tap of the moment'.

Once on the train, an anxious voice from beyond tells us that the electronic booking system is down, hence the reason for no seat reservations showing ('does it really matter?' was my view), and we would be delayed whilst they performed the dreaded 'full system reboot'.

"Have you tried switching it off and on again?" jokes a jokey bloke.  "That is exactly what they are doing!" snaps a hoity toity floral blouse lady, who didn't look like someone who'd ever watched an episode of The I.T. Crowd in her life.

"BRING BACK STEAM" bellows a beard, rising up from his seat, quickly shrinking back down when the rest of the carriage look at him in an 'alright mate, settle down' kind of a way.

At least I had my BRAPA snacks and fun reading material ..... 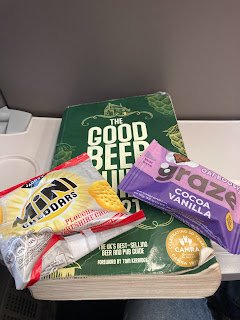 We didn't have to wait too long to set off.  Ten minutes to be precise.  Just enough time to arrive in Donny at exactly the same minute that my connection to Rotherham was due to depart.  I ran beneath the underpass and up the steps, but it was a vain attempt.  It was well and truly dearly departed.

I look at the station clock.  Then the scoreboard.  Then my watch.  Then my phone.  57 minutes until the next train to the home of the Merry Millers.  Draughtsman?  Oh go on then! 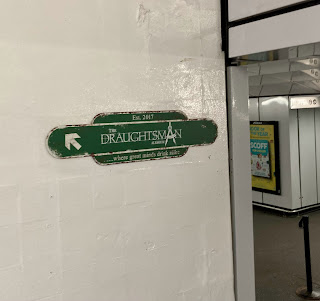 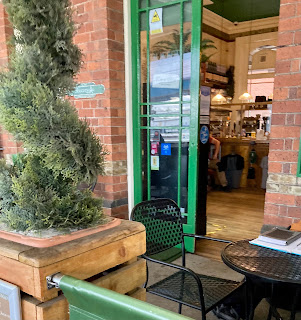 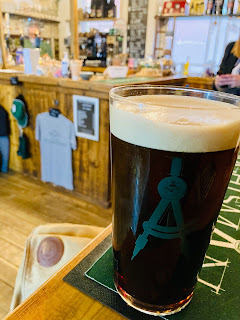 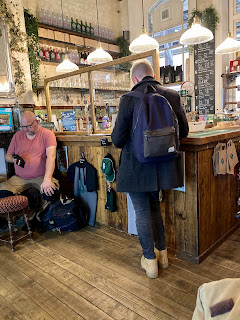 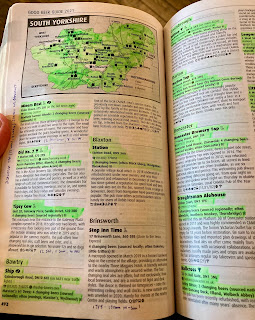 It was another great Draughtsman experience, even if I had to make my debut on the posing stools up to the right.  Because of the small space, it is a uniquely intimate station tap.  At one point, six people (all strangers) commented in quick succession on the availability of Stilton pork pies.  Two young commuters in the corner got talking, strangers, in their 30's, of the opposite sex, in 2021.  It just doesn't happen.  The George Wright drank superbly.  I got chatting to a lady with an air of Frances de la Tour about agonisingly missing train connections.  A mad bloke with tattoos drank a pint of lager in two seconds.  I offered someone a seat. He said no, but the thought was there.  You don't get this in York Tap or Parcel Yard.

They talk about the huge percentage of your life spent asleep.  For me, the stats on my lifetime spent in Doncaster station feeling cold and bored must be frightening.  Even with this lovely pint interlude, I still had twenty minutes of terminal boredom before the train to Miller land arrived. 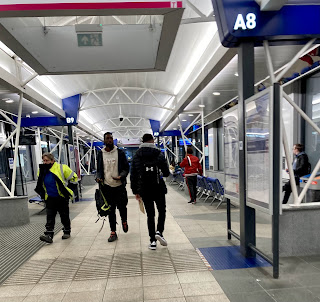 Half the town were in tonight, having a laugh and a smoke and packet of quavers.  Decent night out in Rotherham this.  Smell wise, you should always bear in mind the three W's - weed, wee and watermelon vape.

I was the only paying customer aboard the slightly delayed 73 service.  I was willing the bus to speed up knowing I'd only have approx 25 minutes in the pub, otherwise I'd have to wait another hour.

It was dark as I stepped off the bus behind Mr Watermelon Vaper, the man sat closest to me in the bus station.  He crossed the road, I stayed on the left, and the pub came into view ..... 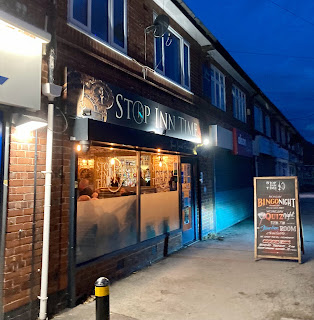 It may look much like your typical poxy micropub on an unassuming row of boarded up shops and outlets, but Stop Inn Time, Brinsworth (2005 / 3434) deserves all the praise one could bestow on it.  They came up with a theme, 'time', and ran with it!  No expense spared.  Wanna do something well, do it properly!  Clocks of all shapes and sizes abound, tables with clock motifs, and an elaborate warren of covered outdoor drinking areas, some pubbier than most micropub interiors.  The grass was real, and during my brief 25 minute stint, I must have sat / stood / loitered in four or five different areas.  A three deep queue at the bar on arrival was NOT ideal with the time constraints, and the great preponderance of time pieces only added to my anxiety!  'Tick tock, tick tock Si, not long til the bus!' they silently mock.  Some 'happening' has obviously 'happened' involving the large group of garrulous lads to the front left, all eyes are them, some lady even wants a photo, did I just miss pure BRAPA theatre?  Despite the clamour and number of bodies, when it gets to my turn, the landlady asks if it is my first time in here, where I've come from, directs me to a few parts of the pub I might find comfortable, and says she hopes I enjoy my time here.  You can't teach hospitality this good.  South Yorkshire folk are born with it.  I end up chatting to a bloke in the 'Moment in Time' covered bar.  His Mum lived by York's Victoria Vaults pub.  Very close to me.  But she's dead now.  He's just started asking me about other Nunnery Lane boozers when his mate arrives, and after ten seconds of standing there mouth open, eyes expectant, I realise I've served my purpose and my presence is no longer required, so I slope off to both of the other two indoor/outdoor areas to wield the green Stabilo.   Then to the illuminated outdoor smoking area, ending back inside by the classically micro 'only' loo.  For all this praise, I sadly have to tell you my Abbeydale Heathen had a weird tang and the beginnings of a vinegary smell.  Nevertheless, when the landlady pokes her head through a crowd of locals on my way out to ask how my visit was, I tell her I've really enjoyed myself, which is sort of 95% true if you think about it. 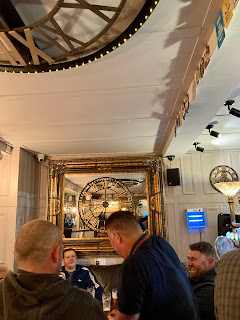 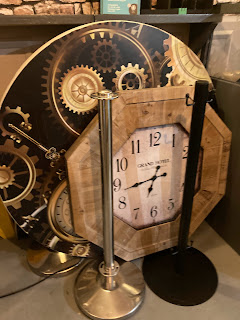 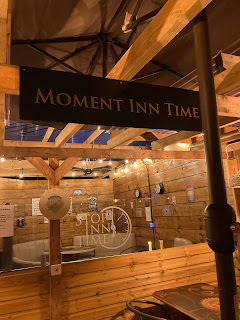 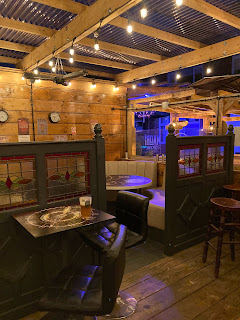 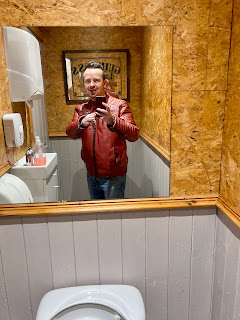 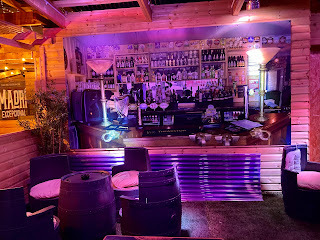 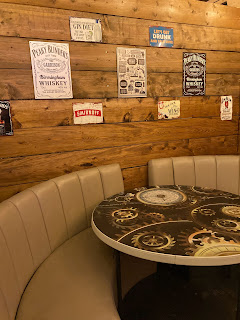 As I stride purposefully in the direction of the Poplar Drive bus stop, I'm relieved and slightly surprised to see a large gaggle of ladies waiting in the dark, one is trying to apply eye shadow.

Before long, we are back in Rotherham and guess what, a train towards York left 3 minutes ago, and I have nearly an hour before the next one!  It feels like Saturday's bad train luck in the Horsham / Littlehampton area was spilling over into tonight.

Oh well, time to pay a visit to an old favourite (but not visited since 2019), not as celebrated as the glorious Cutlers or New York Tavern, but it never lets me down ...... 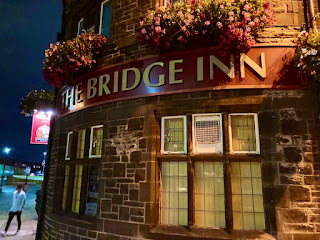 Name me a pub with better drippy classic urinals than the Bridge Inn, Rotherham (which were unchanged much to my relief), as walking in to a red and black painted 'rock pub' was something of a shock to me.  There was even a gig on.  And all the old codgers I used to see quietly supping their Stones had suddenly donned The Damned tee shirts, Stetsons, chatted casually on Buffy and Stranger Things, and supped Old Mill instead.  Not much surprises me after 7.5 years of ticking, but this was a weirdly addictive fascinating pub experience.  Glad to note the pub layout remained unchanged, and still that nice old carpet leading to the side areas of the pub.  I order a Styrian Wolf.  The young barman is way too happy and enthused for a Rock Club Vibe.  "Great choice, a lovely ale!" he chirps.  "I thort it said Syrian Wolf and was thinking ooo errrr" adds bloke in a hat.  A cropped haired lady with a name like Rachel randomly sits with me.  "I'm a bit deaf so you'll need to speak up" she tells me above the din.  But she doesn't give me chance before launching into "I hate what the smoking ban has done to pubs ..... you DO agree don't you?" she implores.  I'm half expecting her to whip off her mask to reveal Old Mudgie at this point, but she's talked herself into craving a cigarette, makes her apologies, and leaves for the outdoor area, never to be seen again.  The kids are coming in now in their droves (well, three of them).  Looks like a band are about to start.  I kind of really want to stay, but as has been the problem all night, the clock won't stop ticking. 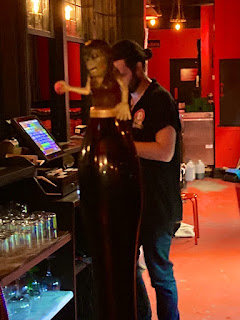 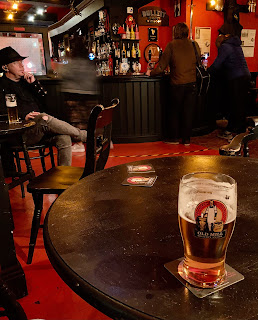 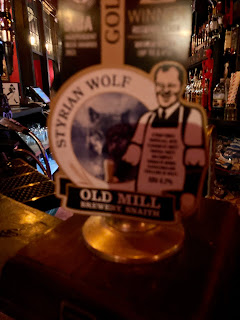 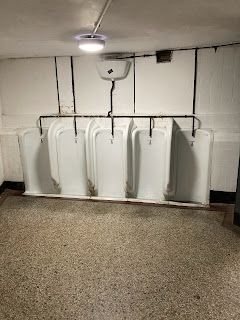 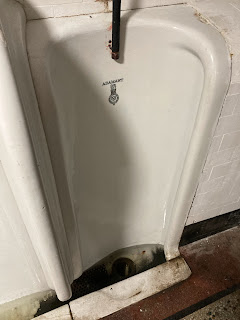 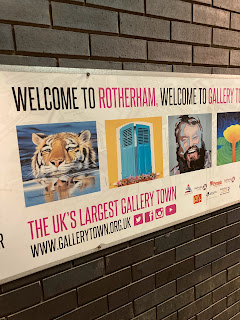 Back on the train, another change at Donny, another painful wait (Draughtsman long since closed), and back in York for 21:30.  So that is 5 and a half hours I was out, for a rushed 25 mins in my required BRAPA tick.  Pub ticking folks, a mugs game.

See you on Friday for tales of the darker side of Staffordshire.

Until then, cheerio.  Si