A week ago, and we weren't even in our third pub yet but it had already felt like a long day.  After an ill-advised pint in Stoke's bod, and rural fun in Draycott-in-the-Clay and particularly Marchington, the best taxi driver in North Staffs Chee Seong Lee dropped us on the outskirts of Uttoxeter, wearing the expression of a man who doesn't want to be roped into BRAPA action ever again.  He even pointed us back towards the town centre for when we were done. 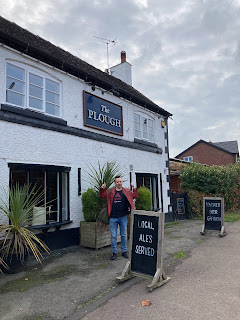 The best quality ale of the day was enjoyed here at Plough Inn, Uttoxeter (2008 / 3437) about 15 minutes outside town in an area called Blounts Green.  The beer in question was called '?' which allowed me chance to have a joke with the fantastic barmaid as to whether you call it 'Question Mark', do the symbol with your hand, get your Dad to make the shape of a question mark with his pliable 74 year old form which is used to doing TWO daily Mr Motivator workouts these days.  She replied that 'Question Mark' would be fine so I didn't ramble any further.  A stodgy pub of some integrity, with a lingering air of background dining, this was a hard pub to judge.  Feeling the need for some air, we both joined a jolly group outside, after taxi stuffiness and the intensity of Marchington.  But what was interesting, a later trip to the loo found us both looking more favourably on the inside of the pub we'd walked out of.  The brickwork in the gents was not fake in any way, the floors nice and slatey, the corridors kind of narrow.  Not that we regretted our decision to sit outside, the weather still unseasonably good but above all, it made sardine and tomato sandwich smuggling that little bit easier! 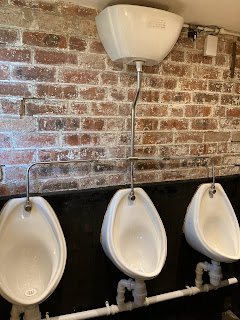 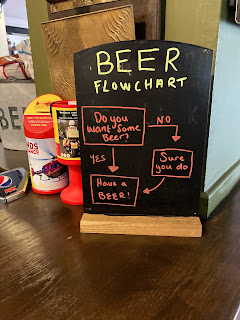 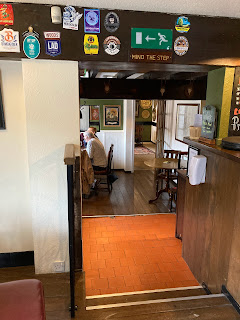 The walk back into central Uttoxeter allowed me to give Dad the training session he'd been demanding.  With a pub trip to Brum coming up with some of his friends, he wanted me to show him how to navigate yourself from pub to pub using Google Maps, with yourself as the blue dot.

So I let him plug in the next pub and walk us there, being careful not to give him too many pointers!  He was a natural, only problem was his old phone was so slow, it was taking too long to respond.  He said he'd get a new phone by next week, and our training would recommence then!

But I had my own problems, my charger lead had stopped working, so I encouraged Dad to carry on best he could.  Biting my tongue as he walked us straight past the next pub, I coughed, looked to my right, and he eventually saw it! 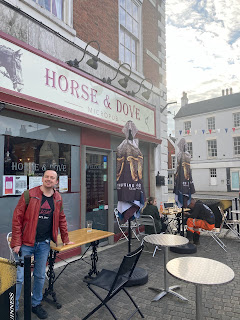 A micro amongst a sea of what looked to be a town jam-packed with old boozers, OF COURSE the GBG would decide to include this one, Horse & Dove, Uttoxeter (2009 / 3438).  It had a bit of depth to it, and a pleasant enough atmosphere, but I can't say it made a long-lasting impression on me.  Friendly youthful atmosphere, the Elgood's Plum Porter certainly was drinking well (it is no Titanic, I'm only part saying this to wind Citra up in readiness for my Hampshire holiday).  It might've been a sign of the stage of the day we were at, but Dad confirming that in all his 74 yrs, he's never seen a horse and a dove in the same room made me laugh far too much.  If pub sign fonts are anything to go by (and Matthew Lawrenson would tell you they are), this 'Algerian' is apparently the font that says 'meh .... whatevs'.  Which probably sums up the whole experience in truth. 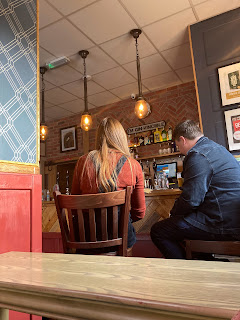 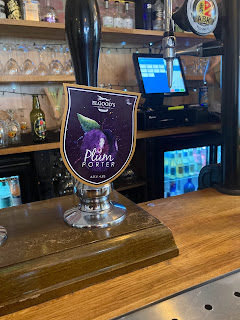 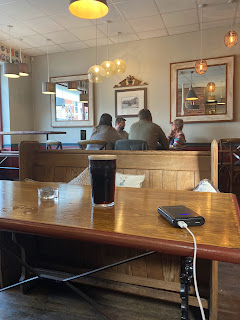 For once today, the train was actually timed well so we hopped on one stop to a place called Blythe Bridge, back in the direction of Stoke, where I was hoping the next pub would wow us.

Situated in a gloomy corner of a row of shops, I can't say it looked inspirational, but let's not judge a book by its cover, it might be pub of the year material ....... 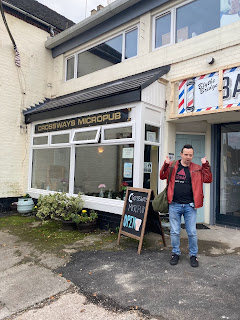 To cut a long story short, it wasn't.  Crossways Micropub, Blythe Bridge (2010 / 3439) had a glum air, save for this one overly chirpy bloke, who tried so hard to get somebody, anybody, to engage in conversation.  Not that anyone was having it, even we gave him a wide berth having briefly acknowledged him, I felt sorry for the lad.  Stick him in Crafty Fox in Old Colwyn, the Grocers in Cadishead or the Chiverton Tap in Cheadle Hume, or probably anywhere in Kent, and he'd find his level.  Someone green and woolly finally relented, and I don't mean Colin.  I wasn't a fan of the ale either.  The brewery of the hour being Peakstones Rock from nearby Alton, which I need to visit (one bus a week, 10am on a Wednesday type of place) just tasted 'chalky' to me.  All we could do to occupy ourselves was to debate where exactly the bus to pub six would stop. 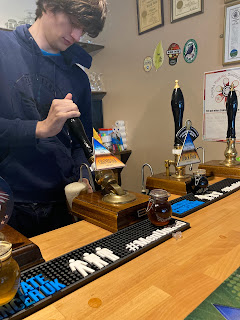 The bus did what we asked of it, and we bounded down a lane to our final tick of the day, as Dad was desperate for the loo - I tell him he should do what I do, and always go on the way out whether he needs it or not (when will these kids learn?) ...... 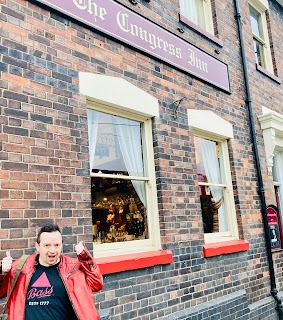 A BRAPA rarity, but the final tick of the day would prove to be my favourite, here at the Congress Inn, Longton (2011 / 3440).  It was the boozer today had been crying out for, especially in the second half.  A large sweeping main bar area, benches, carpets, and hidden back side (not backside).  Putting you in mind of Staffs classics, it felt like it belonged in Leek.  I was all happy and fuzzy by now, and could tell I was not fully focussed as I missed the Bass despite having a tee shirt on.  But you wouldn't wear a band tee shirt at that band's gig, so perhaps a similar unsaid rule applies re ale?  Luckily, the Fyne was more than fine.  A toilet selfie was another 'probably wouldn't do in first pub' move.  A young barmaid was making her debut, and as she was being shown the ropes by an experienced mother hen type, the jolly codgers along the bench from us told her beer was £1 a pint, and that the landlady had a baby aged 24.  But the child is now 16.  It didn't check out, and our newbie has a facial expression like 'crikey, what have I got myself into?' but I'd say she's done well, if I worked in any pub, this wouldn't be a bad one to choose!  Long as I could drink the profits and sit on the bench. 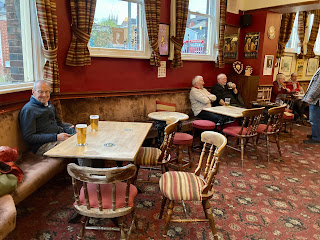 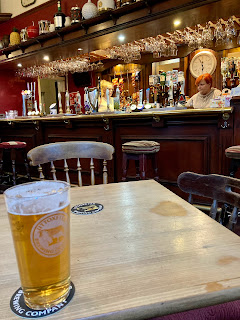 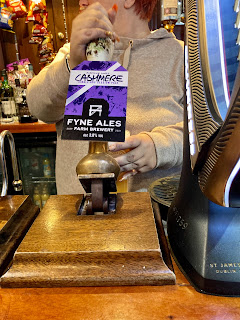 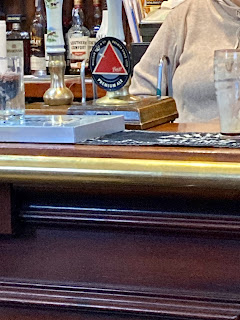 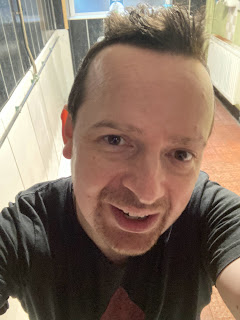 For the first time in history, Uber worked on a Daddy BRAPA day, so we shot back to Stoke station, and managed to hop on a train back up to Manchester, which wouldn't otherwise have been the case.
Annoyingly, we missed our connection to York by minutes, which is becoming an unlucky theme of my October pub ticking.  Only one thing for it, my Parcel Yard of Manchester ...... 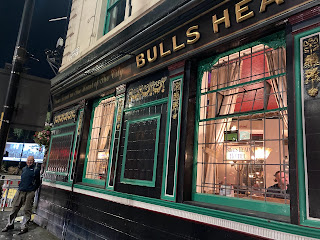 It had been a good few years, but must be at least my sixth visit to Bull's Head, Manchester , a pub I've always had a soft spot for.  A real boozer with a fantastic atmosphere this close to Piccadilly is such a thing to be treasured in 2021.  But how do you get in?  We eventually made our way around the back, where a fire escape style door was opened, staff peered appraisingly at us, and let us enter, obviously we looked like the right sort!  Jolly Anglers-esque then, but more inclusive.  A group of blokes starts singing, another thing that always happens here about 7pm.  The reassuring range of Marston's ales were on, served by the usual friendly staff, so a pint and a half of Sunbeam it was, sitting at the table I always sit at by the foot of the stairs.  Dad couldn't believe £6.49 was accurate, even went looking for a price list, but Manc Twitter assures me this is what we should expect in Manchester these days.  Jeeez, I've definitely been away too long.  I still thought we were in £3.50 a pint (much cheaper than York) territory!  Dad left early to get us coffees for the train, I caught him up once I'd finished my pint.  I had to ask someone to come and let me out as I pawed at the door - I felt like a cat. 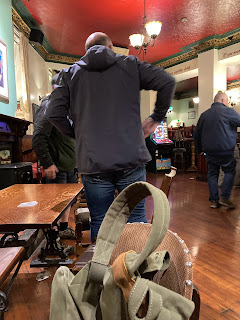 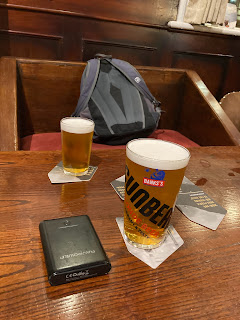 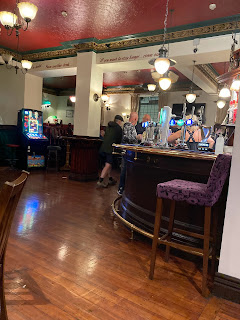 After a bit of confusion, I found Daddy BRAPA and we boarded the chaotic, standing room only train, which mercifully started to thin out after Stalybridge, and definitely by L**ds, as we'd been sandwiched like a sardine and tomato, into First Class.  A sobering experience?  You can judge. 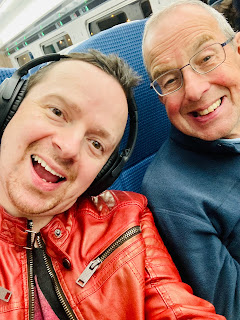 We both found the Sunday a massive struggle, and I vowed that for the third part of this hectic Daddy BRAPA trilogy, we'd be 'more sensible' in North Wales next week.   I bet you can already guess how that went.
Join me tomorrow, for the tale of how I completed South Yorkshire.
Si