'The heat is on, the time is right, the time for you, to tick a pub, cos everyone's greening, and they are highlighting, trying to tick, the best that they can, when they're going for going for Gold(hanger)'.

(For those of you unfamiliar with the 80's quiz show, don't worry, I haven't gone mad.  Well, no madder than usual).

Still reeling from the unexpected closure of the King's Head, Tollesbury, I needed a boost.  I often find in BRAPA, where there is a 'down', an 'up' soon follows.  It is the yin and yang of ticking.

I pressed the button on the bus when we reached the sleepy village of Goldhanger.  Just to embarrass me, he powers on past the stop, shouts "WHERE MATE?" brakes suddenly, climbing a grass verge.  Dust flies up.  And we come to an ungainly halt.  The five passengers and everyone outside of the non GBG pub look at me in a judgey manner.  Cheers driver.  For nothing. 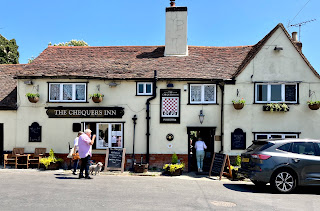 The Chequers Inn, Goldhanger (1783 / 3212) looks fantastic, and is.  A couple, who've obviously observed my manic expression, encourage me to overtake them and go first.  I don't like the pub's choice of Stabilo as I wait patiently by the sign: 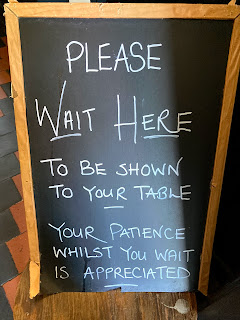 They apologise for having to seat me indoors.  "That's what I loike!" I reply, going the full Chas n Dave.  "I'll put you in the billiards room" she tells me, so I'm a bit surprised to see a room with no billiards table, but there is a scoring thing on the wall, and a lamp, so if you try really hard enough, you can imagine a billiards table at least.  It is old and creaky, feels centuries old, it probably is.   The kind couple who let me go first are also seated in here, and soon we get chatting.  My favourite random pub strangers of 2021 to date, Alan and Theresa, down from Braintree for a bite to eat and a drink (ale has become too fancy these days so they are sticking to red wine, my favourite lockdown tipple!) which means I can quiz them about that GBG tick that lives rent free in the BRAPA head, Andrewsfield bloody Airfield.   Some people are just on your wavelength and easy to talk to aren't they?  With the Ghost Ship drinking very well, my mood is improved immeasurably from half an hour ago.  They top it off by buying my pint for me, as it has been one of those pubs that won't take payment til the end despite my earlier efforts to dangle a Yorkshire Bank Goldcard under their Essex shaped noses.   What wonderful folk, today was back on track. 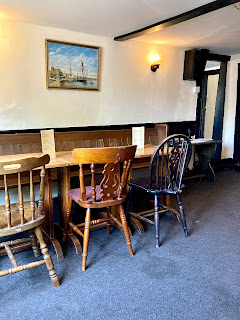 If you are ever going to get your Little Totham tick done on foot, Goldhanger is the place to do it from.

I say goodbye to A&T and the staff at Chequers, and head out on the winding quiet lanes, zero phone signal, in search of my next tick.  I hardly see one car, all I can hear are buzzing insects, cheeping birds, and an occasional laughter of those sunbathing outside their ridiculously posh houses en route.  I say hi to a group of Pimms drinkers near a paddling pool. I bet they are millionaires or something!

I've done plenty crazier walks, but am hoping for a taxi back if possible as the pub finally comes into view ..... 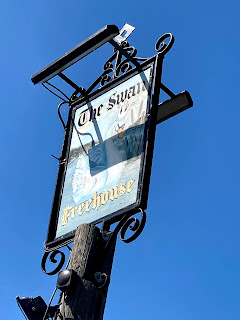 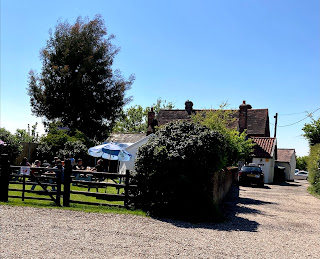 I seem to have approached Swan, Little Totham (1784 / 3213) via the back, where funnily enough, a taxi is parked.  I make a mental note.  The two barmaids seem surprised when I shun the busy marquee in favour of another gloriously atmospheric indoors, where there are zero customers, but a dog the size of the side of a house.  It bullies me throughout, and blocks my way to the gents cos it thinks my bladder should be stronger at the age of 42.  It didn't say that, but it was implied in the eyes.  I hate judgey dogs.  Juogs.  I order a beer called 'Volt' which tastes good, but doesn't shock me!  Sorry.  The blonde barmaid (not that I notice hair colour #WokeSi2021) is obviously new, and is getting a pep talk from the brunette one about how well she's doing so far.  Armed with this knowledge, not wanting to scare the newbie, I wait til the latter returns before I start chatting taxis!  As luck would have it, a taxi driver called Mitch is just swallowing his last mouthful of chocolate mousse and is about to settle up.  She takes me to his so I can introduce myself!  This is a new novel way of ordering a taxi.  He has a kindly, languid Dave Beasant-esque style, and agrees to take me back towards Maldon.  Showing what a first class barmaid she is, aware I still have three quarters of a pint left, she gives me a running commentary of where she's at with giving him the bill, him paying etc.  I keep a watch on him through the window, and when he disappears, I down my pint, leap up, crawl under our giant canine one final time, and make sure he's not leaving without me.  Phew!  Pub ticking by the seat of your pants. 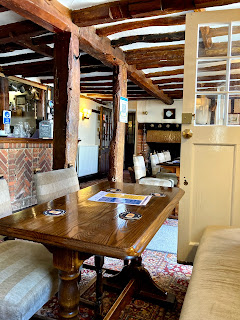 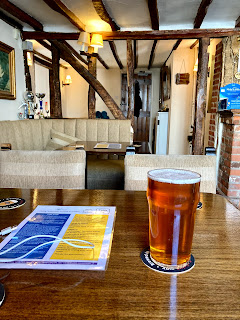 I later was told this was a national pub of the year winner.  Wow, well I mean it was good, but in the context of the strong county that is Essex, was it really any more stand out than say Goldhanger, Stow Maries, Rochford or Brentwood?  No!  But above average in the grand scheme of the GBG.

Mitch was a top bloke, and drops me in the outer Maldon hamlet of Heybridge, and with chocolate and pub twitter on my mind, it was impossible not to call it the Maltesers Arms or the Maltmeister Arms. 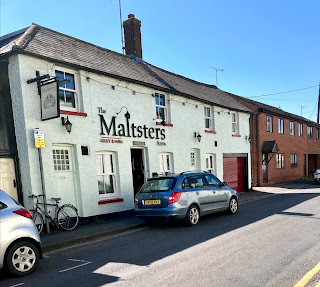 Maltsters Arms, Heybridge (1785 / 3214) was of course the real name.  I'd end up finding a real unsatisfactory lockdown theme develop concerning GBG pubs in and around Maldon, which I'll talk about more in part three.  This pub bucked the trend, of 'allowing itself to breathe' when all around were being overly restrictive.  This could be something to do with it being a Gray & Sons pub, as I'd been to plenty others I've enjoyed already since Essex became the 'Brapple of my eye'.  A few people I'd spoken to this weekend had told me how the locals here were particularly 'cliquey' though it wasn't a sense I got, perhaps as most people sat outside, and I once more was allowed to be the sole benefactor of the atmosphere within.  The guv'nor seemed a sound bloke, my pint of Wibblers went down nicely, and the bric-a-brac style was lovely, reminding me slightly of Olde Vic in Stockport, but of course, Colin had to be careful not to wander too far and get mistaken for being pub property!  Heaven forbid.  See below photo.  A malnourished 80 year old Bez appeared on a bike, rambled on for a few mins about nothing, and then left much to the pubs relief.  That was a rare moment of human interaction as for the most part, I brushed up on my Buffy.  A lovely pub to be in, much recommended. 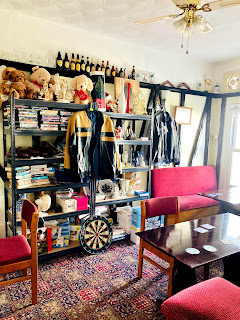 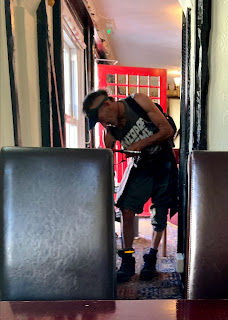 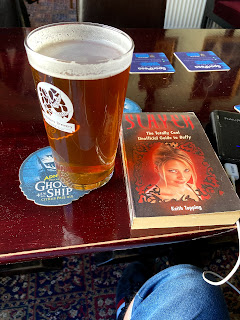 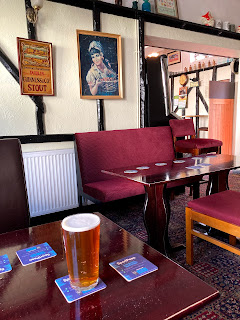 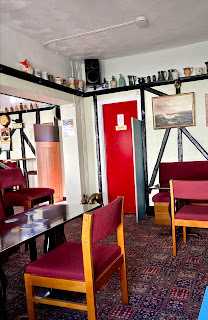 So that was a really positive return to form after a tricky start to my bank holiday weekend.  Three really good pubs.  So of course, it was all due to go downhill again!

Join me for tales of that in part three tomorrow,