A random pile of logs not doing anything, slow service at busy times, too many dogs, a crying infant ..... hell, even a poorly kept pint of beer (as long it is replaced with good grace), all things that I can forgive in the name of BRAPA.  But one thing I can never forgive is staff rudeness.

It was a long journey from Woking to Whyteleafe, but I was determined to finally tick off my remaining East Surrey outlier.

In good spirits after my Ed Wray inspired first half, we kicked off for the second, with the sun shining, and with work over, commuter traffic speeding frantically along the A22, passing this little micropub.

It had eluded me back in 2020, when their social media was so centred around 'carry outs', it was hard to know whether they were functioning as an actual 'come in and have a pint' proper pub.  That would prove to be kind of ironic, as to what followed. 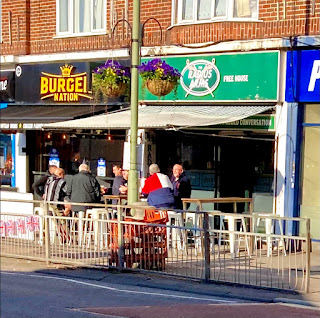 Radius Arms, Whyteleafe (1760 / 3189) was the name, and I was relieved to see a bunch of local blokes sat outside with pints in hand.  After much trouble crossing the road, I plonk myself down on the bench to the right of the locals as you can see in the above photo.  I'm not sure whether they are letting people inside or not but I'm not too bothered either way in the circs.  A lady appears quite quickly at my shoulder.  "2 pint or 4 pint carry outs" she states quite shortly.  I crane my neck again to check that the locals are definitely drinking pints and it wasn't just a mirage.  "Errrm, can I just have a pint to drink here?" I ask, with a furrowed brow.  "You said you wanted a carry out.  We do them in 2 or 4 pint measures!" she barks.  I'm not sure where she's got this from.  I'd not spoken to her before. Had Colin shouted it from my bag perhaps?  The only explanation.  "Oh no, I just want a pint!" I reply, knowing full well you can't get a BRAPA tick from takeout beer.  She steps closer, turning to face me, and raising her voice, persists "BUT YOU SAID YOU WANTED A CARRY OUT!" Feeling slightly intimidated, and worried I'm never going to be able to highlight this one green the way things are progressing, I change tack "Look, I'm sorry if you thought I said that, but I really just want a pint, I know what I want (I'd seen the beer list tied to the railing opposite) and I can pay cash or card, so please can I have a pint?"  Awkward pause.  Finally, she relents.  As lovely as a pint of a stout by Oakham might sound, I can't say I enjoyed it after that!  I glance up, a sign below the awning reads "it's a never ending beer festival with added conversation".  I tell Colin that I guarantee no one is going to talk to us here (yes, I talk to my cauli at times of stress, what of it?") but to prove me wrong, when I stand up to 'adjust myself', a gap toothed local turns round and says something jovial about the weather.  So this gave me at least a crumb of comfort.  But imagine working in the hospitality industry and being about as hospitable as a holiday on Mars?  Our first BUMS (BRAPA Unpleasant Member of Staff) award of the  2020/21 season.  Thankfully, this is an incredibly rare occurrence, I've met some lovely staff in GBG pubs over the last 7 years, many of the best actually in micropubs! 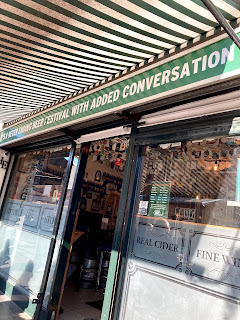 The journey back to Guildford was long and arduous, but at least gave me chance to calm down!

After purchasing a bag of food from Tesco, I strode out in search of my remaining pub tick in the town I was staying.

I had to laugh when I was cross-ticking the GBG last October and noticed this one, a new Guildford tick and a stones throw from the Travelodge where I had stayed last summer, and was staying again now:

Being called the Wooden Bridge, Guildford (1761 / 3190), I was slightly disappointed how unwooden the bridge that I had to cross to reach it was.  I even took my emergency lighter to it, and nothing happened, which is probably just as well from my point of view.  There may well have been a troll beneath it, but that's Twitter for you!  (that was supposed to be a joke, sorry).  A police helicopter is circling too, making me feel rather paranoid.  At least the bridge allows me to take one of my better photos of the holiday: 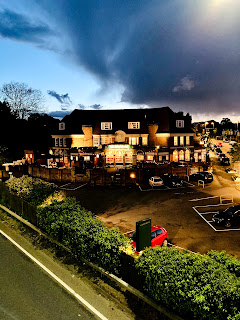 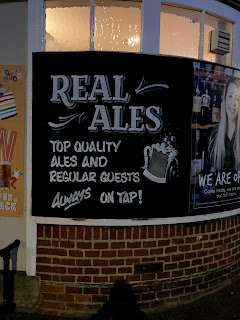 The pub had a very 'non GBG pub' feel, if you know what I mean.  Rough and ready, certainly not a criticism, quite refreshing really.   One of those where you cannot differentiate staff members from punters.  A bald bloke leaps off a bench  in the centre of the pub to greet me.  I have no idea if he is a pissed up local, or a highly motivated staff member.  I soon realise he is the latter when he pushes the Greene King App down my throat in an encouraging manner, and I sit on a healthy section of upholstered bench.  What a huge interestingly shaped room this is, and I can suddenly appreciate how it is quite a famous gig venue of old.  Quo and the Stones played here back in the day.  Today, the entertainment is even better, helped no doubt by the lateness of the hour.  People are sprawled everywhere, watching the dregs of Burnley v Liverpool.  0-2, 78 minutes gone.  My Tim Taylor Landlord appears and is in very good condition, I must say, always a gamble ordering this darn saarf.  It soon occurs to me everyone has a Welsh accent!  Now this happened to me in Slough Wetherspoons too.  Like a group of mixed age, mixed sex people randomly jump aboard a coach in somewhere like Cardiff, and then they pop along to a spacious GBG pub, just to make BRAPA more fun.  To my right, the 'ladz' with their lagers, having a good laugh, rushing off outside to smoke at regular intervals.  A couple of elders they seem to respect sort of keeping them in line!  And then to my left, the awkward nerdy lot.  All bright hair, tie dyed loose fitting clothes, totally silent, staring up at the plasmas with wide eyes.  A large ginger guy, with bum hanging out, keeps scratching his arse and smelling his fingers.  Not even slyly.  His girlfriends haven't noticed, but the 'ladz' have and as you can imagine, are merciless in their micky taking,  I of course, have accidentally sat between the two factions, and have no idea where to look (well not his ginger ass!), so have to simply stare earnestly into my pint or pretend I give two shits about the football.  Liverpool add a third, most of the cheers are gambling related, and everyone slopes off back to this mythical Welsh coach leaving me to have a few minutes in a much more peaceful Wooden Bridge!

I considered staying for a last orders pint as I was so close to 'home' but nah, I had a fairly early start planned for the next day.

And the next day was Thursday, my 4th of 6 days, and such good progress was I making with my quest to complete Surrey, sneaking off to nip one in in Hampshire didn't seem a problem.

Plus, Haslemere is one of those places people ALWAYS mention when I'm down here, so I wanted to see what all the fuss was about.

BRASA burger is something I'll probably sue and get closed down when I get rich and famous: 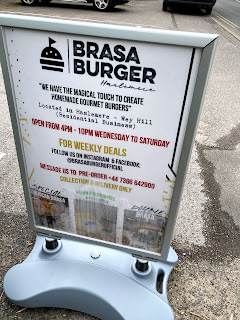 There was a fairground setting up but I lost the photos.  AND a scarecrow festival.  Scarecrows are bloody terrifying like clowns , they kept appearing from driveways making me jump.  I chose a winner though, a young short sighted Bradford City fan with missing lower legs.  A bold and niche design. 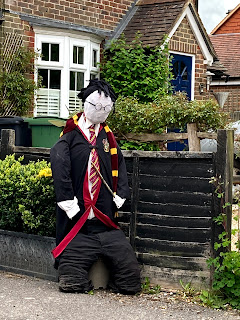 The walk took me to East Sussex first: 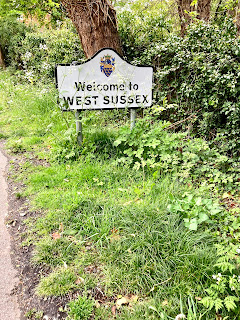 And then into Hants: 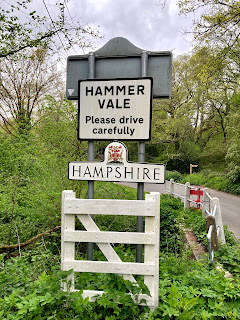 I got distracted by a stream, as I had a new bird book and wanted to see if I could see anything 'wading' (more on my bird book in part 9 or 10): 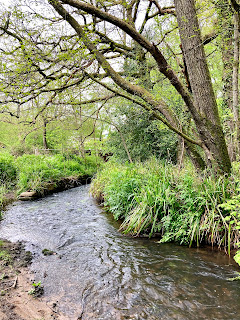 I was starting to think that this pub was 'made up', so a bit of a relief when it finally came into view: 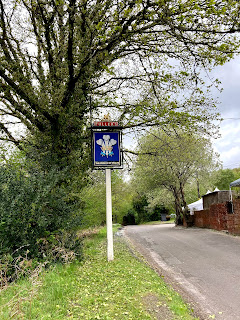 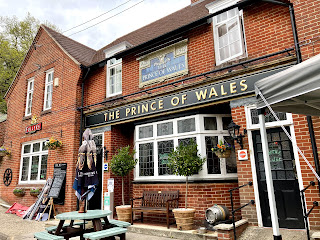 And even greater relief when the blackboard revealed that had I come earlier in the week, I'd not have got in at 12 noon!

Still, I think I was due a bit of luck.  Prince of Wales, Hammer Vale (1762 / 3191) was the name, serving Fullers ales in a rural setting was the game.  A walking group who had pre-booked loitered aimlessly outside the pub, debating whether to go inside and if there's one thing I didn't mention earlier which really annoys me in pubs, it is 'indecision on the part of customers'.  Faffy fannying around, grrrr.  I was greeted, I thought a tad brusquely, by a barmaid/landlady who probably thought I was a walker so I can forgive her.   She was a lot more gentler when she realised I was a billynomates making a bee line for the furthest corner of the pub!  The pub tempted me with a Dark Star ale which wasn't Hophead, but when I asked for it, they told me it definitely wasn't on.  So Hophead it was.  The pub was 'quite nice', obviously refurbed to make it 'prettier' than the one time probable farmery ramshackled thing (sadly), I think it was Ole' Mudgie who told me when he visited last century, it was a much smaller space inside, despite looking large from the outside.  'Reverse tardis' effect he said.  The main excitement was when I stood up, and sat back down, feathers billowed out of a cushion I was on.  About 10 minutes later, one of the walking group had sent their bravest person inside to order.    We'll call him Geoffrey Robinson, he sounded like one.  He was astonished to learn you could not order drinks from the bar and was sent back outside, hanging his head.  Poor GR!  "Oh well, looks like just you n me" I actually say out loud to Colin (I really must stop doing this).  "You okay there?" says a different barmaid, peering around the corner.  Embarrassing.   Time to drink up and eff off! 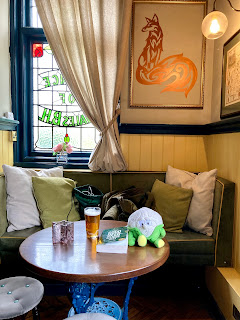 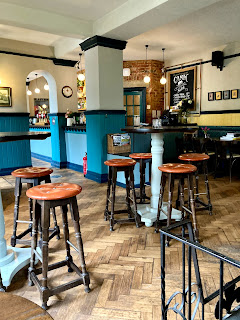 I've written far too much, so I'll leave you in peace now, but similar time tomorrow for Part 8, I'll tell you about three more pubs.  We were entering the 'business end' of my quest to complete Surrey.