Call me immature, you probably do anyway, but the fact that the pub website and their Facebook page kept coming up as 'Swan Staines' made me chuckle like a teenage boy as I wondered what stains a swan might make. Euuurrghhhh!

All of those miserable faces crossing the Thames bridge in the opposite direction about 1pm on Friday 21st May did look a bit alarmed by my crazed expression, but if they'd considered swan stains, they might have at least cracked a smile, or something seminal.

Here it was anyway, a very majestic swan pub sign, which the facemasked man stood outside tried to recreate, but ultimately it was a poor attempt by he: 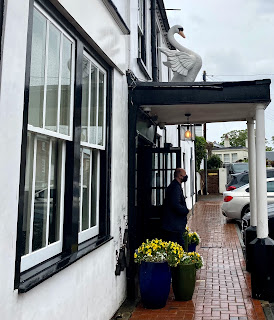 What pissed me off about the Swan, Staines (1769 / 3198) is that it had the tools available to it to provide me with a very decent pub experience, but claiming they were almost fully booked in a pub lacking people and (for the most part) atmosphere from behind their Fullers laptop and complex table layout system, just didn't cut the mustard jumper.  After much sighing and head-shaking and grimacing,  I was reluctantly seated on a raised bench by the draughty door, which afforded me a nice panoramic of the bar, as I waited for these fabled customers to arrive.  No doubt, they all cancelled without informing the pub.  You hear a lot of that recently.  A group of six blokes arriving after me for 'an hour' were told they'd have to sit outside in the rain, until the one wearing just a tee shirt (well, he had pants on) argued the toss and they overrode the booking system and miraculously found him an indoor table.  Luckily, my time here was saved not just by an excellent pint of Pride, but by two heroines in the centre of the room.  They'd already confused the staff by saying this was purely a liquid lunch, but they cackled loudly, clearing enjoying life, totally animated with wild hand gestures, even making puking noises at one point!  It shouldn't have been so notable, but it just seemed so out of sync with a pub like this, which is kinda sad.  But they were ace n saved the day #PubWomen  Staff were pleasant, the pub had character, but overall, an experience where the restrictions took a great toll on proceedings.  When I left, there was one customer remaining, and he looked like a lost Scotsman. 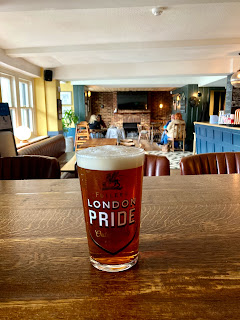 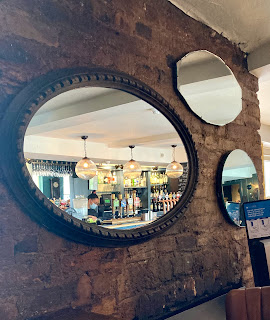 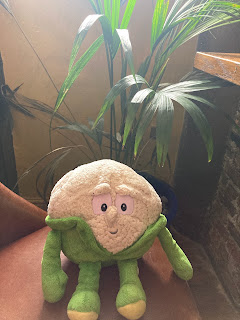 One last look at the elusive London Stone , as my 'man in the know' (Andy from Thames Side) told me that whilst it did look 'totally gone' a few months back, there were now whispers it would be reopening, but as a cask free zone, and certainly not a GBG 2022 contender.  So armed with that knowledge, and the door even more closed than earlier, I decided to cross it off.  Of course, I'll be back if ever it reappears in a GBG, but my feeling is we could be waiting a very long time. 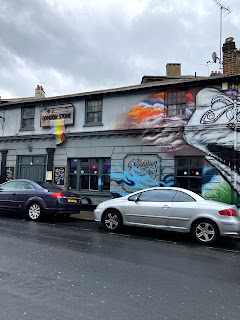 Next thing I know, I'm in South/West London.  Barnes to be precise, one of those pubs I've seen in the GBG on and off for years, so much so I'd even have been able to tell you the address was 'Castelnau'.

It was school chucking out time, no room on the bus for lil' ole' Si so me and my poor dodgy knee walked up the side of this chaotic road towards the pub, to keep the Fullers theme going ...... 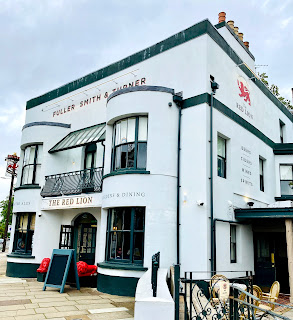 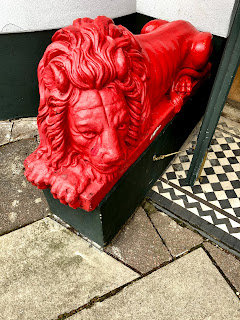 A handsome looking building, but I got off to a bad start when the bloke entering in front of me with his yappy dog let the door slam in my face.  Rude!  Ouch, a painful welcome to Red Lion, Barnes (1770 / 3199) .  Interestingly, the pub was a LOT busier than the Swan, and yet the barman finds me a table immediately, although being between front door and bar, it isn't the greatest location and makes surreptitious pub photography almost impossible, as eyes were front, back, left and right of me.  Right of me was our rude door slammer, also having a pint of the rather underwhelming Oliver's Island.  He paid with his watch and didn't say please or thank you, just when I thought he couldn't become any more of a twat.  It made me double my own efforts, I smiled at every staff member who walked past, determined to be their favourite!  Ok, so I smiled at this barmaid twice in five seconds and she looked terrified, but my intentions were purely honourable.  A well meaning barman then brought rude bloke's dog a complimentary bowl of water.  "He won't touch it!" says rude bloke.  The dog then slurps the whole lot HAHAHAHA, take that fuckface!  A barman I've not smiled at yet makes sure I'm not too draughty, maybe word is spreading of my loveliness?  The dog has a sneezing fit, but rude bloke doesn't care, he's gone outside to smoke and left the poor mutt who is whining.  I decide to pay and when summoning a barmaid, she looks at me sympathetically like you would an underdressed northerner.  I felt like I made this pub experience as much fun for myself as I possibly could. 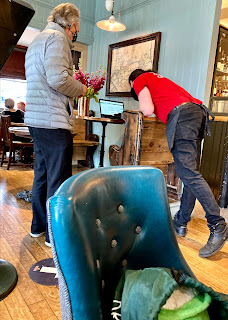 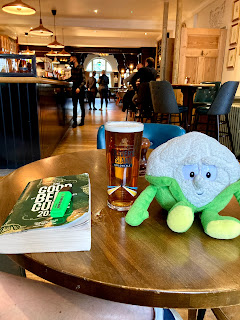 I was further rewarded by the surprise realisation that this London Wetland Centre was just around the corner.  Amazing!  I had this new I-Spy bird book (a bit like the GBG) and was trying to tick off a Pochard which is a weird duck, having got my Mandarin tick on Sunday in Walton-on-Thames. 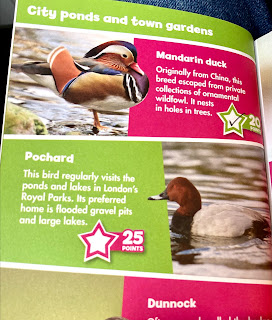 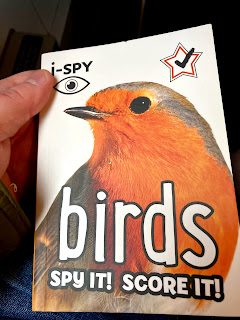 Sadly, very much like a GBG pub, the centre had closed for the day when I arrived!  But I went around the bits I could. 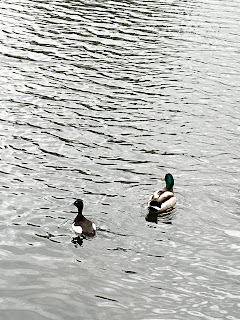 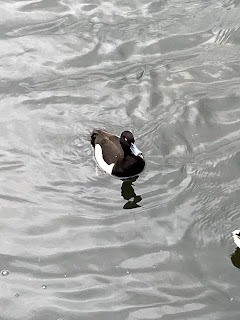 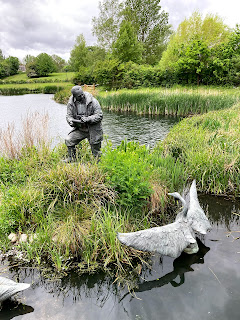 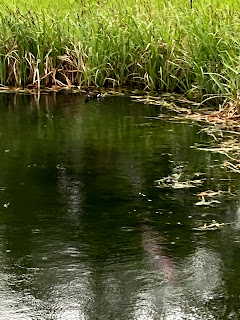 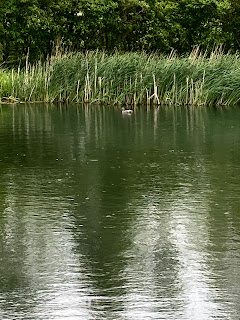 It was slim pickings, but I ticked off a Tufted duck, and these amazing green parakeet things which were swarming in this tree.  Didn't know they had them in the wild, but I consulted my book and yes, they were a required bird tick too!  50 points too.  Take that Pochard.  Great stuff. 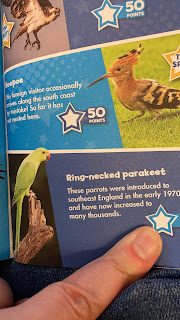 Back to pubbing and I realised Brentford isn't far where I had a new tick and not like Hull City will be playing them any time soon (which I couldn't be sure of at the time, I just had a hunch they'd win the playoffs) so off I went ....... 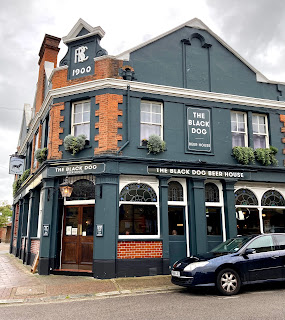 You know some pubs just scream 'QUALITAY' the moment you enter, and this was true of Black Dog Beer House (1771 / 3200).  If pubs are good enough, the people will come, and this place was packed to the rafters, so much so that the wincing and 'ooooohs' as I asked for a table were probably justified.  In the end, when I said I'd not be any longer than 30 minutes, he squeezed me between pub characters - a kind of lairy Fidel Castro in a retro West Brom shirt, and his lady friend, resplendent in fine vintage 50's style get-up, and I hoped me plonking myself in amongst it all didn't change the jokey atmosphere they'd got going with the next table.  I asked to pay NOW not later, but I was dying for a wee, I HAD to dash and he'd wondered where I'd gone so I found myself almost behind the bar apologising for going missing, but he was such a sound geezer, he didn't care (even though about 20 people were simultaneously demanding service).  AND he had a mustard jumper on just like the Thames Side dog and Dorking Cricketers barmaids.  It must be on trend in the beer industry or something.  To show what a beer pub this was, I had to choose off a laminated menu (ooh la la), I went for something by Moor and just stopped myself from saying "Please sir, can I have some Moor?" although WBA Fidel Castro would've almost certainly pissed his pants laughing if I had've done.  Weirdly, blocking the centre of the floor, a white dog!  In a pub called Black Dog.  Beyond said hound, a 90's David Beckham is sat with three young librarians.  Pub observation, all done on a time limit.  "9 minutes left mate!" says Colonel Mustard.  'Down it, down it!' comes the cries.  I get there.  'Three minutes to spare too!' I tell anyone who will listen as I zip up my jacket and make for the exit  Top pub this, even under pressure! 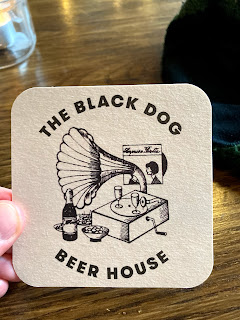 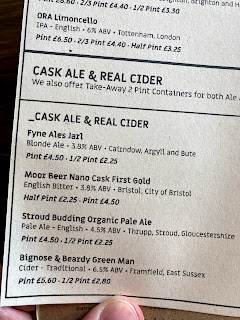 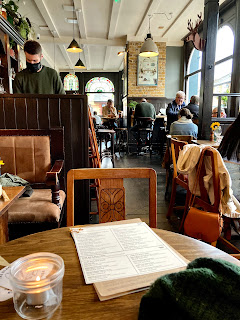 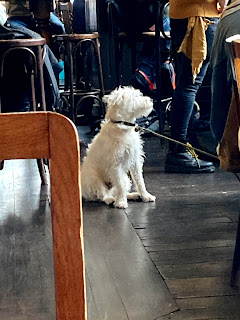 Back to the station, had to get myself to Chertsey.  The Surrey conclusion is in sight!

Join me for tales of that, and a bit of cheeky Hants, on Sunday.